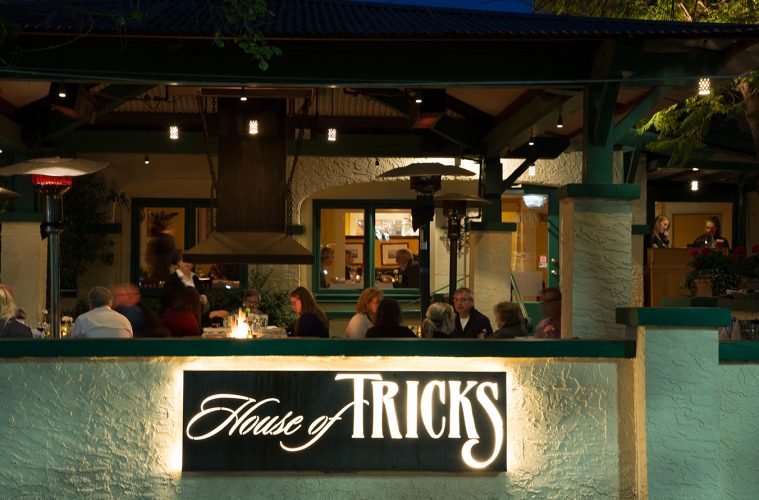 Beloved House of Tricks to Close in June ’22

House of Tricks’ founders Bob and Robin Trick have announced their plans to retire in June 2022. A Valley favorite for more than 34 years, the charming downtown Tempe establishment has built a loyal, enthusiastic following over the years.

This is an especially nostalgic spot for the JAVA Magazine crew who founded this publication in 1994 in a vintage bungalow directly across the street from the restaurant. Many good memories were made and relationships forged there during JAVA‘s formative years.

Bob and Robin’s role in Tempe’s restaurant and cultural scene actually began more than 40 years ago when they met while working at the storied Bandersnatch Pub. The couple left Bandersnatch to establish their own place in a historic bungalow a short walk from the pub. When they started, it would be hard to imagine House of Tricks becoming the much-loved, iconic place that it is now, some three decades later.

“We so appreciate all who contributed to House of Tricks’ success and unique culture,” says Robin. “We have been supported throughout the years by amazing employees, family, friends, customers, business, and community associates. We are eternally grateful for all of them and have plans for festivities and special events over the next six months. We want this to be a transition of gratitude and celebration.”

The restaurant’s staff has an extraordinary record of longevity, many of whom have been at House of Tricks for over 10 years, some more than 20 years – which is practically unheard of in the restaurant industry. This says a lot about the positive atmosphere that the owners created, a nurturing vibe shared with customers and even reflected in the lush gardens surrounding the property.

The longtime couple is looking forward to new adventures and activities that have taken a backseat to restaurant operations over the years. Robin has always had a passion for the arts. A few years ago, she started creating again, mostly with textiles – weaving, hand stitching, and fiber collage. “I plan to continue my long-lost studies in art history, focusing on textile arts and the role women have played throughout time and across cultures,” she says.

Bob’s outside interests have been on the sidelines while he worked to keep up the two century-old houses that function as a busy restaurant. He is looking forward to spending more time fly fishing and doing projects around their home and at their cabin in Payson. The couple also looks forward to spending more time with family and friends, especially their son who recently moved to San Francisco.

Bottom line is, things change – the 1920s bungalow that once housed the JAVA offices has been bulldozed and replaced by a 20-story luxury apartment tower catering to well heeled students. Land values have skyrocketed, and Bob and Robin’s hard work and commitment has paid off – literally. Their property was sold Wednesday, December 15th; however, the restaurant will remain open for dinner and happy hour through a lease-back agreement with the purchaser (101 East 6th Street LP) until June 2022.

While the Tricks are firm on their retirement plans, future possibilities for the restaurant are still open. For now, they are entertaining all options. We sincerely wish them a wonderful retirement and send kudos for creating such a magical oasis in the heart of a bustling university town.