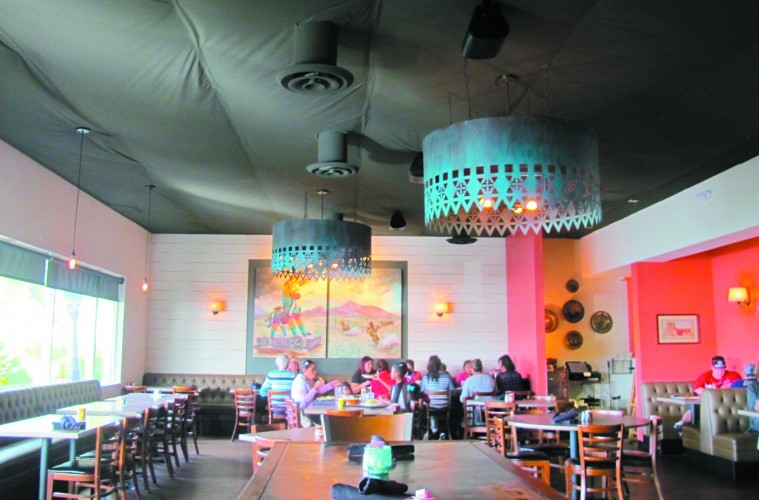 Sloane BurwellJanuary 31, 2016
Taste0 Comments
0
0
0
0
0
0
0
For 45 years, La Piñata ruled its little corner on 19th Avenue and Osborn. According to local legend, the family invented the deep-fried piece of heaven known as the Chimichanga. On any visit, you’d be likely to run into families bringing in second and third generations to enjoy Sonoran-style home-cooked Mexican food—warm and inviting, like you’d find at your Nana’s. Although impeccably clean (I’ve seen hospitals that weren’t this immaculate), it wasn’t hard to notice that the building and parking lot were showing signs of middle age.

According to local legend, the family invented the deep-fried piece of heaven known as the Chimichanga.

My heart broke a little when they closed, because there are so few parts of our history left in town and, let’s be honest, not every restaurant survives a relocation. I hoped they’d survive the shift to their new home in the former Mary Coyle’s location near 7th Avenue and Missouri. I watched as construction kicked in to overdrive, and my heart sank a tiny bit when they installed their new sign, a more modern version of the vintage neon one, albeit with the same font. How much can you change and still survive, I thought.
I am happy to report my fears were unfounded. While there is nothing the same about the decor (except for the cleanliness—seriously, whoever manages this should start a side gig as a tidiness consultant), their upgrade is certainly that, and the food is every bit as comforting and soul soothing as it’s always been. 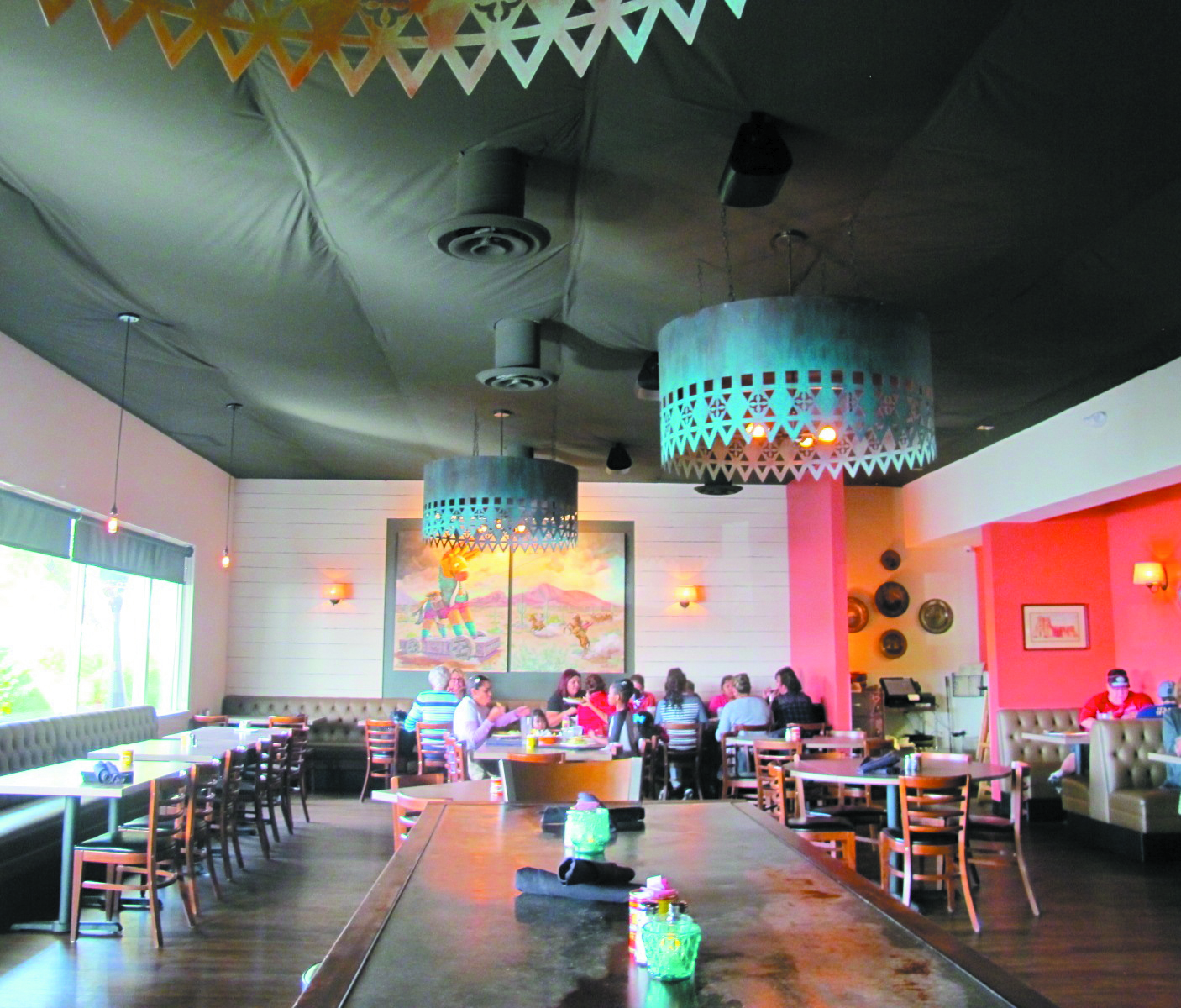 One thing that hasn’t changed, though, is the parking. Their former home was notorious for lack of space, and their new spot folds cars, origami style, into its parking lot. Carpool, friends, you’ll thank me later. It turns out that the lack of parking may be due to the influx of new business. According to our servers, they’ve kept the old favorite staff (cooks, servers, etc.) but nearly doubled the number of positions. I shouldn’t have been worried about their move. 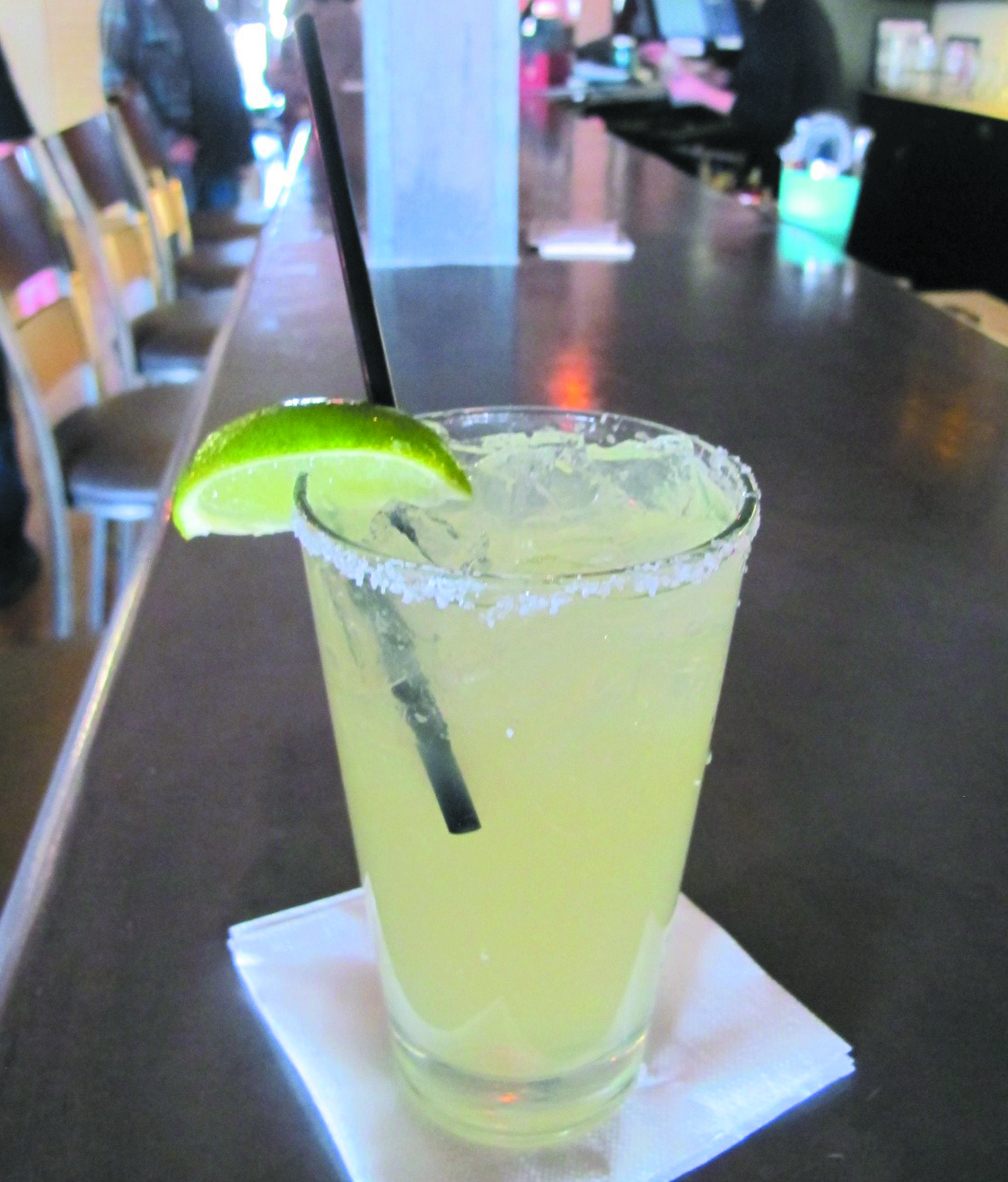 The space is great—gone is the homage to a’70s version of a family Mexican restaurant. It’s more modern, open and airy. There isn’t a single square inch of the place that hasn’t been redone, including a completely reconfigured dining room with a great bar, a stylish community table, charming entry area and toasty patio, replete with working fireplace and enough space heaters to render coats unnecessary. New tables and chairs, of course, and barware. I shudder to think of the expense involved, however gorgeous the outcome.
But what hasn’t changed is the food. Start out with the cheese crisp, ordered crispy style ($6.95), and the perfect Socratic form of this dish will appear. I confess—it took me a couple of years to enjoy the simple tasty beauty that is this regional favorite. It’s not an open-faced quesadilla; it’s more than the sum of its parts—sturdy enough to scoop up the tasty house-made salsa that comes with the never-ending chips. Pro tip: ask for the spicy salsa.
I enjoyed their Piñata Appetizers ($13.95), a veritable who’s-who of the menu. The tiny chicken tacos are as adorable as they are tasty, and the mini-chimis make the case in taste that, yes, La Piñata invented them. But my personal favorite is their corn tamales with chiles. These are more akin to a spoonable corn bread in texture and flavor. Soft, tender, slightly sweet—I would happily order an entire tray of these. 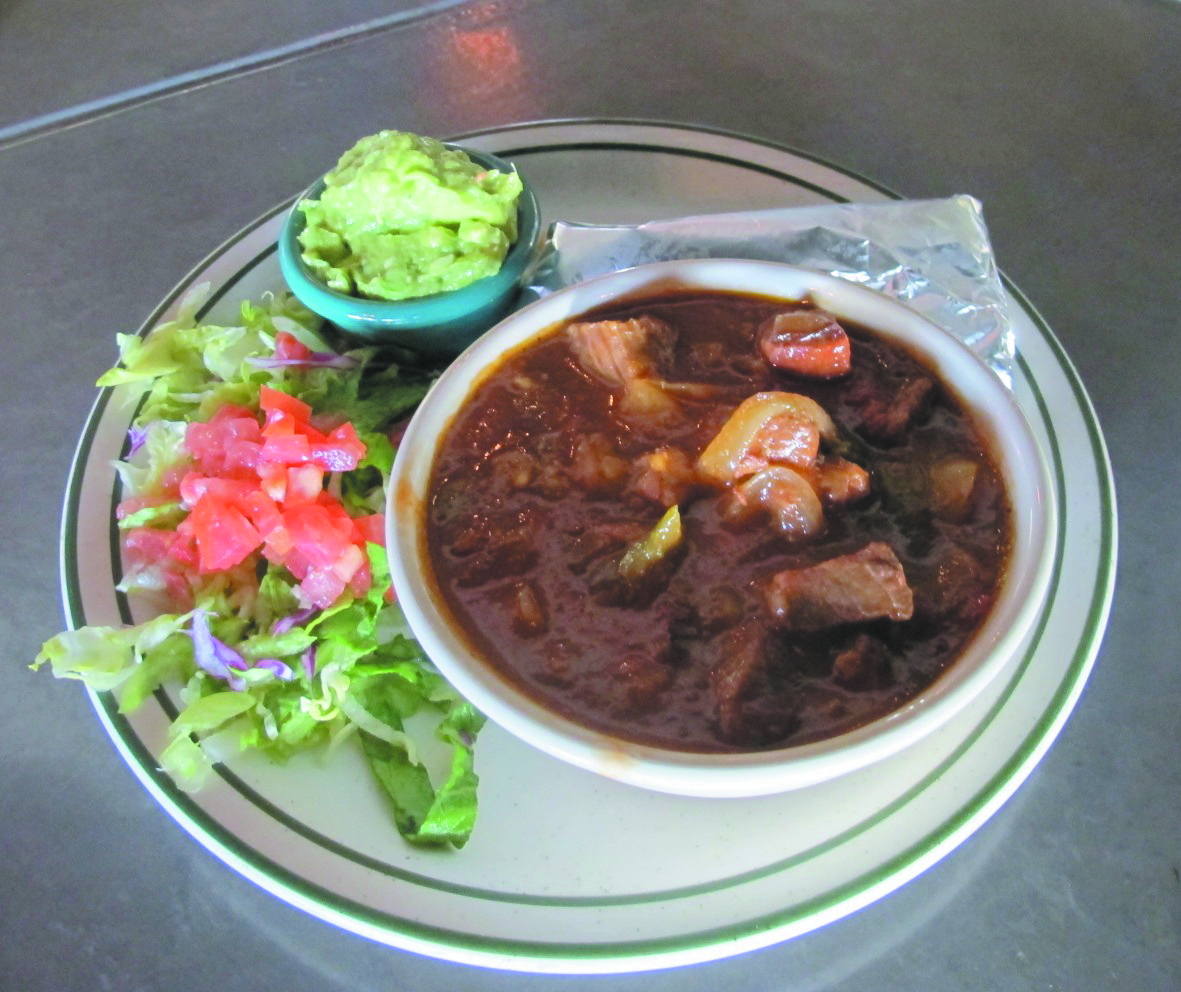 My favorite entree at their former location was the Salad Carbon ($12) with steak. A gargantuan mound of chopped lettuce (nary a leaf of iceberg to be found, thank god) comes topped with an entire tomato, a whole chopped cucumber, handfuls of Monterey jack cheese and what appears to be an entire flank steak, grilled to perfection and chopped into rather large chunks. It hasn’t changed one iota, thank god—from the old-school whole black olives on top, to the ample cup of house-made jalapeno ranch dressing. I’d like to shake the hand of the person who can finish this, since for me it’s easily two more meals at home. 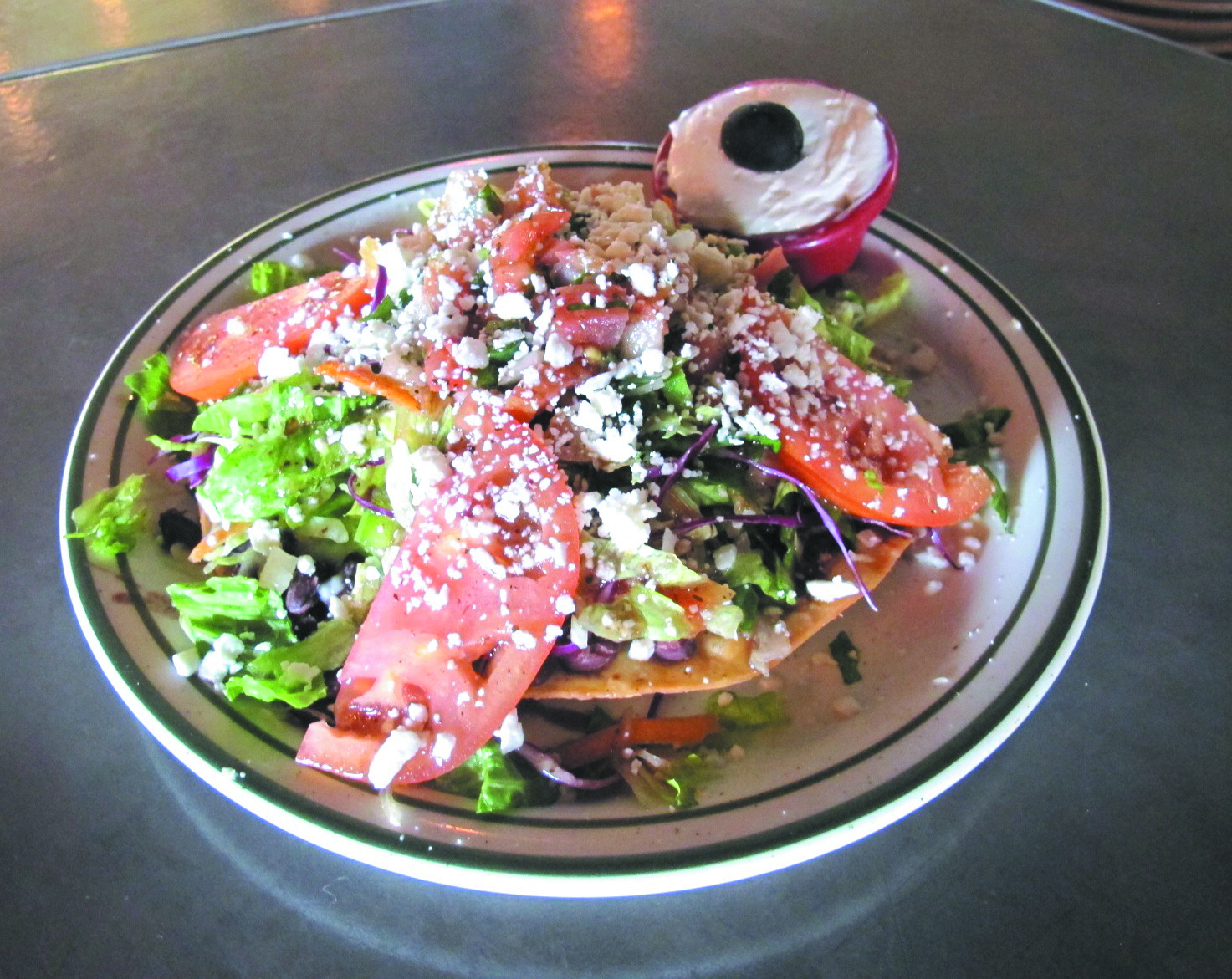 The Pollo Azteca ($13.95) is a cheesy mass of chicken, chiles and ranchero sauce. Succulent grilled chicken comes surrounded in kicky sauce and cheese, with a hint of heat that barely creeps up on you. Use the chips to invent your own nachos with the cheesy, saucy goodness, as well as the rice and beans that come alongside.
The table favorite on one visit was the Mexican Short Stack ($13.95). Go for the machaca version, which is wedged between layers of tostada shells, kicky sauce and more cheese. Unlike other places, their machaca is more like Mexican pot roast, in that the shredded beef is more substantial and less chopped. Something about the mix of meat and sauce made this dish disappear first, probably due to the fact that none of us could keep our forks out of it.
The Carne Machaca Dinner ($13.95) has more of the excellent machaca, at least two cups of it on this plate. Use the grilled tortillas that come alongside to create your own little masterpiece. At La Piñata, the rice and beans that come alongside are no mere afterthought or carb filler—they are well made and tasty. A little bit of rice, a bit of beans and a mound of machaca make a fantastic bite.

I had only one bump in the road during any of my visits. The Pork Carnitas ($13.95) were a titch dry. Not Sahara Desert dry, mind you, but enough to be noticed by everyone on our visit. Was it a deal breaker on the dish? Not really—a dollop of the tasty house salsa took care of it, but we did notice. However well made it was (and it was), it could have benefitted from some extra liquid. 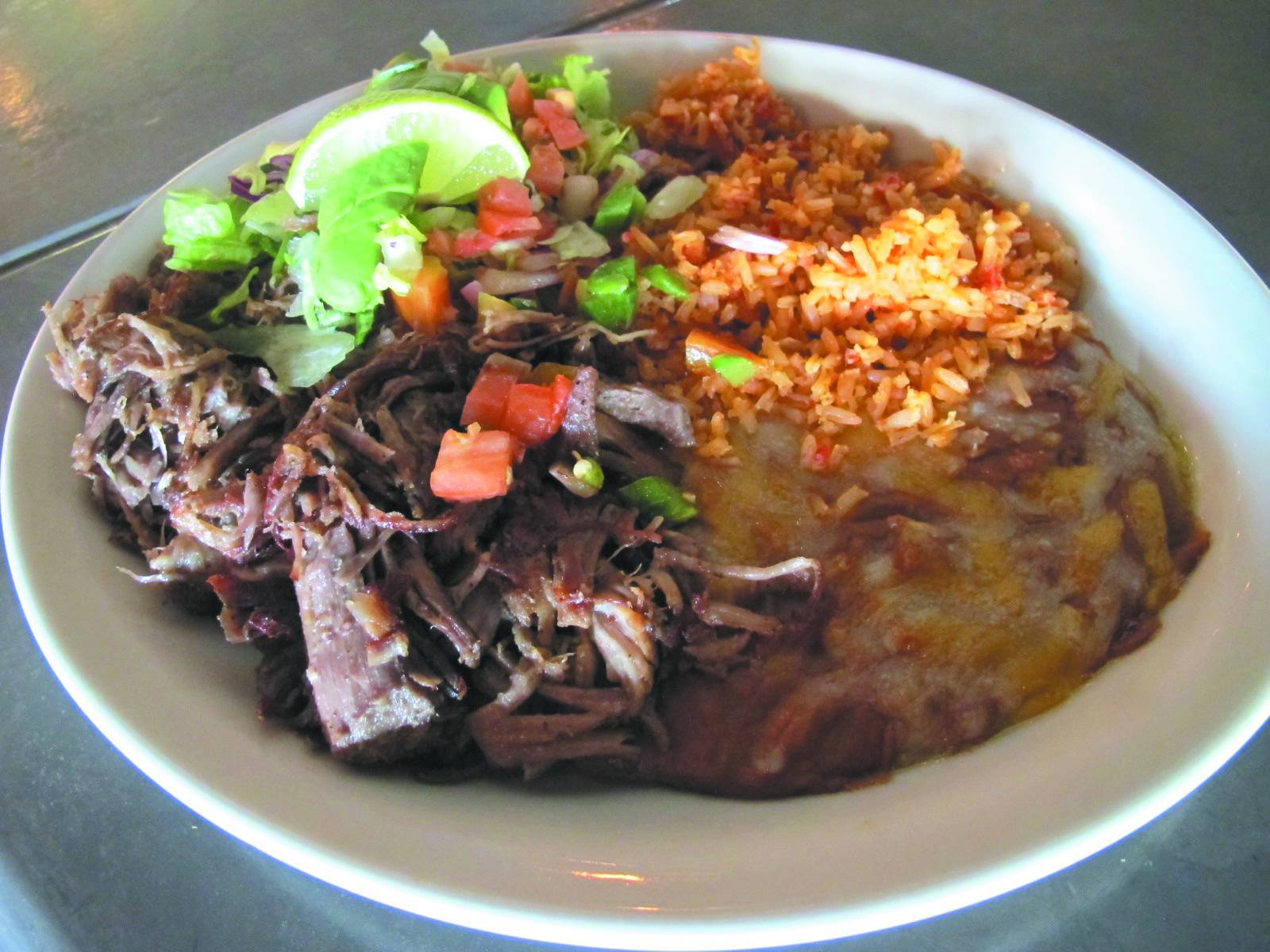 La Piñata’s new location is great. It’s in an easily accessible part of town, and they spared no expense in kicking up the decor a notch. The favorites are still there, and that includes the charming and attentive staff as well as the food. At this rate, they will have no problem surviving another 45 years.