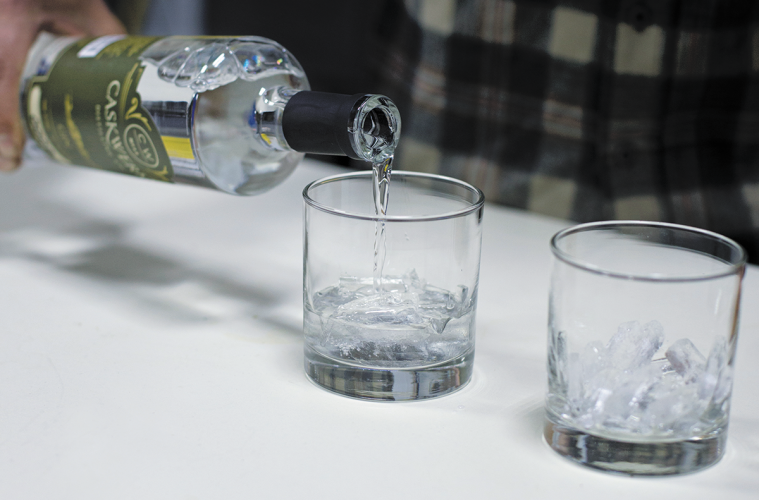 Demetrius BurnsFebruary 1, 2016
Taste0 Comments
0
0
0
0
0
0
0
Drinking is all about sharing. Whether one is imbibing spirits, coffee or tea, there is a communal dimension at the soul of the process. For thousands of years, people have shared drinks as a way of connecting. In that way, drinking is a lot like music—something that can be done individually, but has its origins and highest potential for exuberance in the midst of a group setting. People may listen and drink alone, but they connect to the higher properties of both when among others.

Fittingly, then, the bassist for Jimmy Eat World, Rick Burch, has decided to extend what he shares with Arizona, and the world at large, by opening CaskWerks distillery. For Burch, crafting liquor is a very similar process to making music. “The notes are all there, and they have been there for a long time, but you can arrange them differently and create something that has a life of its own,” Burch said.

The citrus-inspired gin and apple pie liqueur are featured at local favorite spots, such as Valley Bar and Four Peaks Brewery. 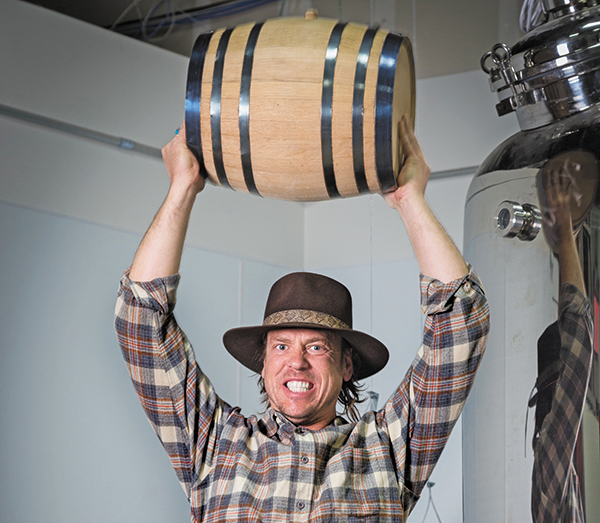 Burch was raised in Mesa, where his first musical notes were played in the fourth grade on a tuba that was as big as he was. He originally wanted to play trumpet or saxophone, but those sections were full. His music teacher at the time, Byron Lipkins, pulled him aside and asked if he would play the tuba, since they didn’t have any bass brass. The big, bulky instrument intrigued Burch so he said yes.
After playing in the school band, Burch gravitated towards bass guitar as he entered high school. He took lessons, refined his craft and began playing in various bands. This is around the time he met Tom Linton, who would later invite him to join a band called Jimmy Eat World, after they lost their bassist.

When Burch joined the group there was already interest from Capitol Records, an imminent tour and an album to record. Flash forward 20 years: the band has achieved living-legend status in Arizona, and their most famous record, Bleed American, went platinum. They have toured the world and Burch has been able to meet and share with a lot of different people. He is always humbled by the impact his music has. “Music is a huge part of human life,” he said. “One thing that distinguishes humans from animals is that we make music. It really ties into moments and experiences and can become the soundtrack of what you’re going through at any given time. It’s an honor to be included in people’s lives.”

Jimmy Eat World is working on its ninth studio album, due out in the fall. The process of coming up with ideas is fun for Burch. The band often works with old ideas, making them new, or tries out entirely new approaches. There’s a lot of give and take in the process that always challenges him as an artist. “We made the conscious decision to try and get out of our comfort zone with this album,” Burch said. “Everybody has this unconscious thing that they do. We are definitely consciously trying to push ourselves closer to the edge of the cliff.”
Burch doesn’t get sick of touring, either. The connection to the crowd and the enthusiasm of fans win him over every time. For him, it’s instant feedback and gratification regardless of the touring hassles. The road wins him over every time.

Early in the band’s existence they used to ask at the end of shows if anyone was willing to let five smelly guys sleep on their floor. This led to a lot of fun experiences, and one in particular where the band was able to tour the Jack Daniel’s facility. A seed was planted in Burch that would later blossom when he visited a distillery in Scotland. “I like the Scottish approach in that it’s a two-step process. It’s all single malt, with only one grain involved, malted barley. The way they dry the grain influences the final flavor. The barley is smoked, then milled and steeped to extract the sugar, but the smoke is carried through in the fermentation,” said Burch. Seeing this process firsthand entranced Burch, and he wanted to bring that back to Arizona in some way.
Whiskey is a staple in the liquor world. Originating in either Scotland or Ireland (it’s hotly debated), farmers would take their extra barley, after supplying the baker and brewer, and distill it. In those days, it wasn’t just an alcohol; it was a medicine. In Scotland they call whiskey “the water of life,” and in that sense, Burch is bringing water to the desert. Burch personally enjoys drinking his whiskey neat at room temperature, but sometimes adds a splash of water. Adding water to the whiskey helps open up the flavor. He says it’s a bit of a rollercoaster when you add water, as the flavor really comes alive. 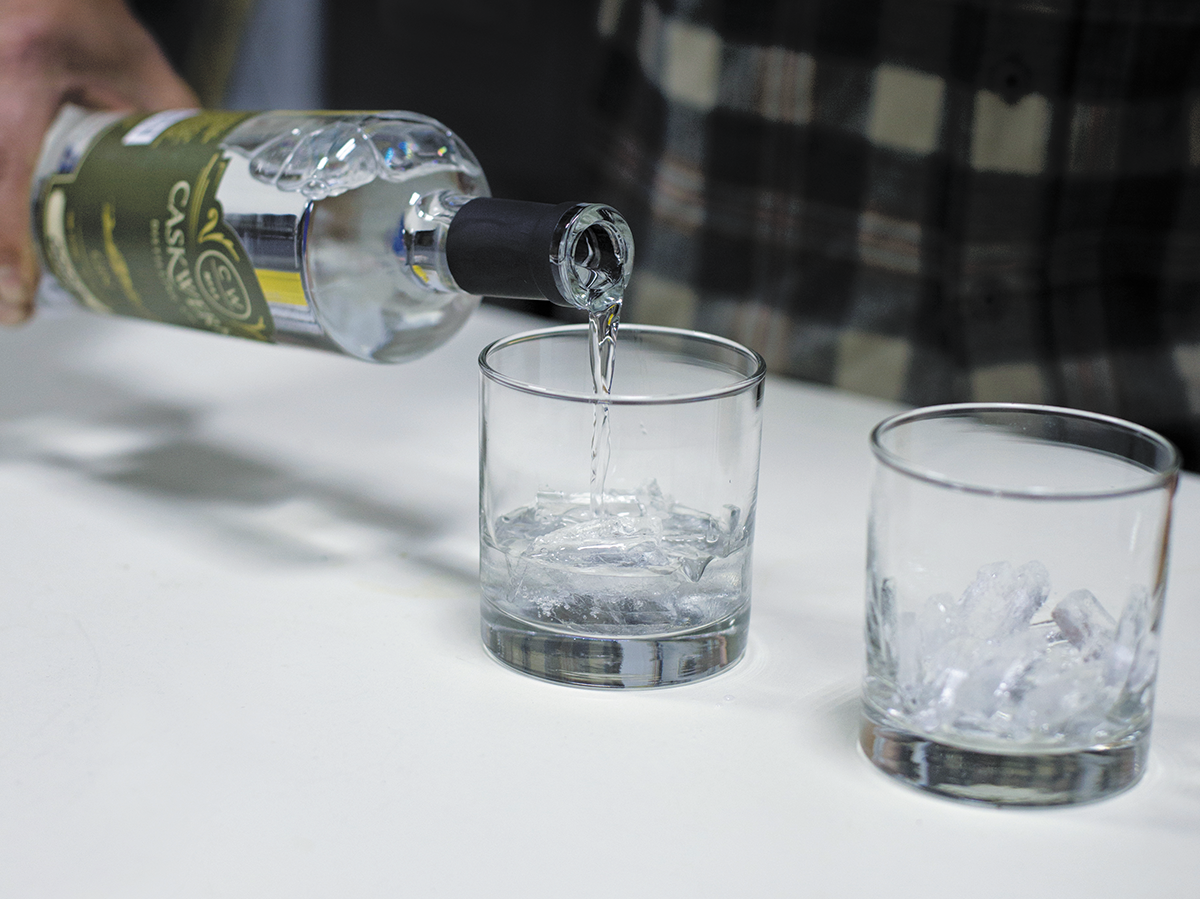 CaskWerks has been a dream of Rick’s for over six years now. There have been a lot of obstacles to overcome; the main one being that you couldn’t even get a craft distiller license in Arizona until about a year and a half ago. Burch was on the committee that drafted the Arizona Craft Distiller legislation, and that statute allowed him to move CaskWerks into an industrial building in Tempe and establish a distillery and a soon-to-come tasting room and retail outlet. “The more (distillers) the merrier because there’s just more creativity and people to bounce ideas off of,” said Burch. “I hope the Arizona craft-distilling scene develops into a collaborative group because so much good could come from that and there’s plenty of room in the market for all of us.” He’s excited about the ability to sell directly to customers on-site. He plans to open the tasting room at the facility later this year, which is now possible thanks to the work he did with the licensing board.
CaskWerks has been distilling liquor for ten months now and their citrus-inspired gin and apple pie liqueur are featured at local favorite spots, such as Valley Bar and Four Peaks Brewery. The company’s approach is very human-driven, as many of the decisions in the distilling process are made using the five senses. “The way we distill at CaskWerks is very sensory based,” said Burch, “which helps us determine when to collect the product and when to stop collecting it. It’s like an art form where human sensory components drive decision-making. You could base everything off of mathematics, but I prefer the more hands-on approach. You can put sensors all over, but it’s not as fun. I like to be right next to it. I like to smell it—that’s what makes it fun.”

I like to smell it—that’s what makes it fun. 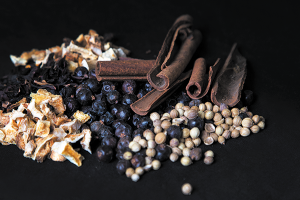 Burch is especially excited about their whiskey, which is still being perfected. One of the main ingredients will be Sonoran white wheat, which has grown in the Southwest for hundreds of years. “It gives a really soft flavor and is very interesting on its own,” said Burch. The whiskey won’t be completely ready for about two years; however, CaskWerks will begin selling an un-aged version in a couple of months, and it should be available around town at local spots.

But it always comes back to the human element, the idea of sharing. From a kid with a tuba that was too big for him, to a big-hearted man who has shared his music around the world: Now Burch is ready to connect to people beyond the music—with the spirited notes of whiskey and fine liquor.