Who Is Pyrrha Sutra? 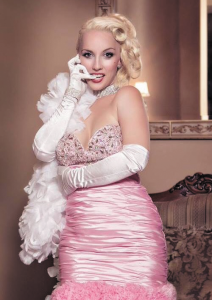 Some little girls dream of ballet slippers, some dream of making it in Hollywood, and others dream of riding a horse on the beach at sunset. Christy Zandlo, known on stages across the United States and internationally as burlesque queen Pyrrha Sutra, may have dreamed of all of those things. After more than a decade of calling Phoenix home, Pyrrha Sutra is making the big leap to Los Angeles. “It will be good for me,” she says. “It will up my game. And I think it will up the game here, too.”

Christy Zandlo was born in Utah and raised in a Mormon family. She moved to the Valley at a young age and says her family was always around. “Entertainment runs in my blood,” she says. “My uncle, Louis Crandall, founded Legend City.” Her aunt, Printy Crandall, was a choreographer and can-can dancer at the legendary amusement park. But by the time Zandlo could walk, Legend City was no more. The park had a short run—from 1963 to 1983—before it was bought out by SRP and bulldozed to make way for new company buildings.

Entertainment runs in my blood

“That’s very Arizona; tear it down and build something over it,” Zandlo says, scrunching up her nose. But her family traditions run deep. She remembers taking dance lessons at a very young age, and says her whole family was very musical. “I’m Mormon, and whenever we’d gather for family events, we would always pull out the instruments,” she says. “[My grandparents] lived in an old church that they’d turned into a house. There was a little stage and we used to put on performances for the family.”

For years, Christy danced and entertained, on stage and as a teacher. Classically trained in ballet, she teaches using the same syllabus as the Royal School of Ballet. She married fairly young, at age 23, after being in a relationship for a few years. After 13 years of marriage, Christy and her husband have recently divorced.

It was her love of the dance and a curious nature that led young Christy to invent her ultimate stage character—Pyrrha Sutra. She says that she got into burlesque “totally by accident,” while working on a show called Extravagance that ended up taking an unexpected direction. “It was was supposed to open at Harrah’s casino,” she says. “We were performing at the space that is now Club Downtown.”

It was her love of the dance and a curious nature that led young Christy to invent her ultimate stage character—Pyrrha Sutra.

The manager at the time, Charlie Lucas, approached Christy and said he wanted to start a burlesque show. “I thought, why not? But at the same time, I didn’t really know that much about burlesque,” Christy says. She went home and starting doing research. Somewhere along the way, she invented the moniker Pyrrha Sutra because she’d always had an interest in dancing with fire. “I was at a show at the old Tempe club Pompeii,” she recalls. “I saw Flam Chen from Tucson performing and they inspired me to want to work with fire.”

That was the spark, but she would need more—the right props and probably a gimmick. Out of the blue, Christy caught wind of a performance at The Trunk Space. One of the greats of burlesque, Satan’s Angel: The Devil’s Own Mistress, was reading a play, so Christy went to check it out. She discovered that this aging beauty happened to live in the Valley. She went to visit Angel Walker (Satan’s Angel) in Apache Junction, which was like going to a museum, she recalls, filled with all the artifacts from an illustrious burlesque career.

“She used to date Clint Eastwood and Janis Joplin,” Sutra says. She now identifies as lesbian. “She used to travel with Bob Hope during the USO shows and used to work with Gypsy Rose Lee and Sally Rand—she worked with all the big names!”

“I was out back smoking a cigarette, and this scrawny little blonde came up and introduced herself,” Walker recalls. Pyrrha told Satan’s Angel she was starting a burlesque troupe, and Walker asked for her name. When she said “Pyrrha Sutra,” she recalls that Satan’s Angel said, “Nice name.” She also approved of her troupe’s name, Scandalesque. From there, Christy says, Satan’s Angel became a big part of her burlesque education—her burlesque mom. She still had a lot to learn about costumes, glamour, makeup and fire.

“We encrust everything in jewels; everything has to be covered in Swarovski—even my gloves,” Christy says. “Satan’s Angel taught me that. She taught me how to make all this stuff. That’s where my Mormon upbringing came in handy—we are very crafty,” she smiles. Angel also told her that she had to have a gimmick. Satan’s Angel used to light the tassels of her pasties on fire and swing them every which way. (She’s known as Queen of the Fire Tassels.) “You have to be an excellent tassel twirler—you have to be able to move those puppies in nine different directions,” Angel says.

Pyrrha Sutra’s gimmick was born in a similar way. One day, Christy says, she was sitting in her kitchen contemplating a couple of enormous firecracker sparklers. An idea popped into her head: “how can I get these on my boobs?” She went to Angel and they spent a day together figuring out how to support her flaming boob sparklers. They created a couple of sturdy contraptions and then lit ’em up. Angel erupted with enthusiasm: “You’re the Queen of the Blazing Bustier! Honey, now you have a gimmick!”

Christy started Scandalesque with former business partner Julianna Curtis in 2004. (At the beginning of 2015, they announced that they were no longer working together.) The first few shows were a learning experience, constantly improving on accessories, shoes and costumes. Christy invited Angel to an early show that did not go so well. Christy recalls hearing the burlesque legend’s criticisms of her routine from the stage. “She was like, no, no, no, you’re doing it all wrong.” After the show Angel offered plenty of advice, like she needed bigger, bolder feathers—not just the boas from the craft store that Pyrrha had first purchased.

Satan’s Angel tells a slightly different version of the story. She claims to have rescued Scandalesque from a boring crowd-sleeper of a show after their emcee failed to appear. Angel says she marched backstage, asked Christy what was going on, grabbed the names of the dancers and proceeded to emcee the show.

Satan’s Angel is getting ready for a European tour. She was just in Peaches’ new video with Margaret Cho and Feist, “I Mean Something.” She also recently had a role as David Arquette’s mother in his new TV pilot, “Trucked Up,” and she starred in this year’s Hollywood burlesque festival.

Pyrrha Sutra’s character has many different sides. She can be sweet, gentle and soft, surrounded by giant feathers, and sing like Marilyn Monroe. She’ll jump out of a birthday cake and sing “Happy Birthday, Mr. President,” and she gets hired all the time for that. She can also be a hard-edged rocker, playing with bondage, boots and leather. She does an act where she’s a badass bitch with a whip. She ignites her sparklers and lights a cigarette from them, then pops the cigarette in someone’s mouth as she makes an exit.

When discussing the history of burlesque, Christy says, “These women were feminists back in the day. A lot of them got arrested. For being sexy.” Mae West used to get arrested and didn’t bat an eyelash—it gave her more press. “And she didn’t take anything off! The thing that people don’t understand about burlesque is that it means to mock—it’s mockery,” she says, “and a lot of people don’t get that.”

A few years ago, when Phoenix Art Museum brought Liz Goldwin, the maker of the documentary Pretty Things, they also invited Pyrrha Sutra to talk about her costuming and burlesque experience. Lately Pyrrha has been producing regular shows here in town and doing out-of-town gigs like running the Halloween show at the Hard Rock Hotel and Casino in Las Vegas. Her collaborations have taken her to new extremes. She’s been working with mixed martial artist and UFC fighter Ryan Jimmo. They developed a routine mixing martial arts moves with dancing and props such as nunchucks.

In addition to lining up shows in the L.A. area, Pyrrha Sutra is also planning to travel up north this spring, to perform at Montreal’s Wiggle Room. “It’s really cute and they treat me very well up there. Every time I perform in Montreal it always sells out. They somehow know who I am up there!”

“Living here, I go to L.A., New York and Las Vegas regularly,” she says. “But what I want to do is just be based in L.A. and still travel a lot.” It will be hard for her to leave behind the friends she loves and has worked with over the years. “Samba AZ has been a really good rock for me, and Cleodora and Carlos Motufar—they’ve been wonderful!” she says. She’s also friends with Phoenix drag queen Pandora DeStrange and her friend Dallas, who was in the John Waters films Crybaby and the original Hairspray.

What does her burlesque mother, Satan’s Angel, think of Pyrrha’s move to L.A.? “It’s kind of like moving from Phoenix to Vegas—it’s a different town. And there are people in L.A. who will do ANYTHING to get those jobs,” she says. “But Christy says she has something really good up her sleeve. You’ve really got to be super-duper at what you do, and I think she is!”

“They take you more seriously if you’re from L.A. or New York. Even though [Phoenix] is a big city, there is sometimes a small-town mentality here,” says Pyrrha Sutra. She acknowledges that there will be plenty of challenges and battles in the next big city, but says she’s ready, confident and hopeful about the new challenges.

She will leave behind a close group of dancers, aerialists, contortionists and other performers that will continue the Phoenix burlesque legacy. “They will stay out here and continue kicking butt!” she declares. “You know what I need right now? I need a clean slate. Because there was a lot of drama that happened when Scandalesque split. My father [rip] always wanted to live in California. His favorite song was ‘Hotel California,’” she says. She says she thinks of him whenever she hears it.

Pyrrha Sutra will perform at a Latin fusion event put on by Cory Thomas at the Arizona Events Center Jan. 29.