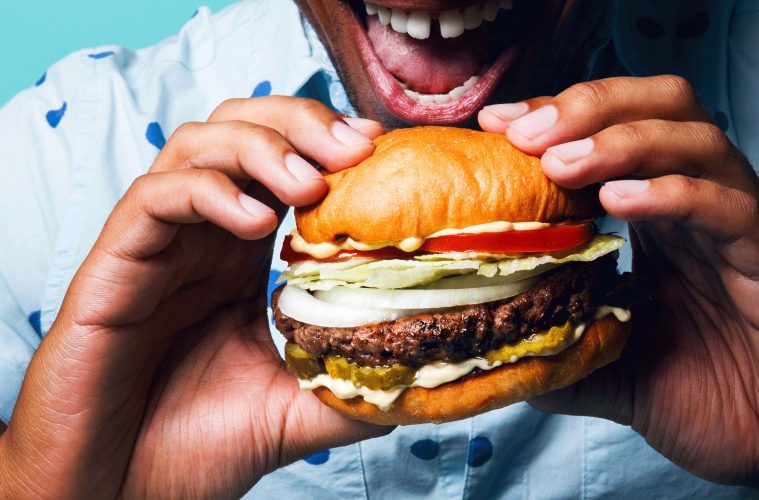 To Dream the Impossible Burger 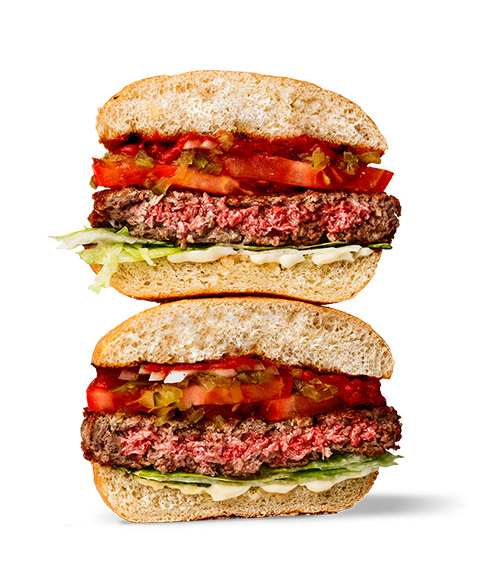 For the ten-ish years I was a vegetarian, I tortured my parents endlessly with every meat analog in existence. Faux bacon? But of course. Marginally tasty bean burger? To be sure. Texturized vegetable protein? Barely – even I, as a vegetarian, could hardly stomach that atrocity. In the years since I found my way back to raging carnivore status, a plethora of vegetarian and vegan options has flooded the market. To be honest, some of them are even good, like Veganaise (which I love), Daiya cheese (not bad) or the Ranchero Salad from Green (with my favorite BBQ wings in town, and they aren’t even real meat!).

While meat-free options are everywhere now (you can buy Gardein at Target), there hasn’t been anything that looks like a real burger. The sizzle, smell, taste or, let’s just be frank, the look of the pinkish middle of a properly bloody piece of beef has been ignored in favor of a passable patty. But not anymore.

Impossible Foods is a Silicon Valley start-up that spent five years trying to perfect faux beef – not just the taste and smell, but the visceral look and feel of real ground beef. As a former vegetarian and currently committed carnivore, I feel qualified to say: they did it, and it’s amazing. Like, let me eat it again and again while I buy stock in Impossible Foods. And surprisingly, ounce for ounce, its nutritional content is nearly identical to that of 80/20 ground beef (i.e., three ounces has 220 calories, 13 grams of fat, 20 grams of protein and an eye-popping 1,360% of your RDA of thiamin).

I remember reading about Impossible Foods several years ago. If memory serves, they were moderately successful with their early efforts, but the product came in at around 200 bucks a pound. That just reeked of Bay Area bougie to me, and I figured it would be, oh, never before it showed up in the Valley of the Sun. But after a recent visit from a friend, I discovered there are actually four places in town where you can get it (check Impossible Foods’ website, which is updated daily). Today there were two outposts of HopDoddy and two of the Counter. I did my taste testing at the Counter on Central and Adams.

While the price has dropped, still expect to pay top dollar. At the Counter, the Impossible Burger is a $5.50 upcharge, making it $16. It’s about the same at HopDoddy, but at the Counter, the service is not fast casual, so you won’t have to get up to refill your own iced tea (that is a big deal for me with a burger that costs this much). You can substitute the Impossible Burger with any pre-fab option, or build your own. I’d advise build your own, and we will get to that.

But now, let’s cut to the chase. Does it look like a real burger? YES. It’s almost magic. The Impossible Burger has an almost identical texture and consistency to a real ground beef patty. The center stays pink (assuming it’s not cooked until it is unrecognizable), and when you press the pink center with your knife, it does bleed a little. Gross, right? BUT SO COOL. The reason is heme – this is the substance that forms the non-protein parts of hemeglobin. And hemoglobin is the iron-rich metalloprotein that brings oxygen to red blood cells of every vertebrate, so basically the stuff that makes meat smell like meat. This is why the Impossible Burger slightly crisps up on the outside like a real burger, and stays pink in the middle, and smells like meat. Note, I didn’t say hamburger. This is an important distinction – while it looks like a beef burger, the Impossible Burger tastes like a fancy-ass mix of bison or buffalo or some other bougie big-game protein mixed with beef. If you handed this $16 wonder to your hunter friend in a blind test, they’d love the burger and think the $16 price tag was because it was half antelope or something.

And as for the taste – it’s umami all day long. Savory, complex, real, like some Gordon Ramsay wanna-be yelled at his underlings for weeks to get the perfect spice blend. The Impossible Burger is so balanced, it is the taste definition of “well seasoned.” It doesn’t taste fake, it tastes like someone who knew what they were doing made it. With an even more savory finish. 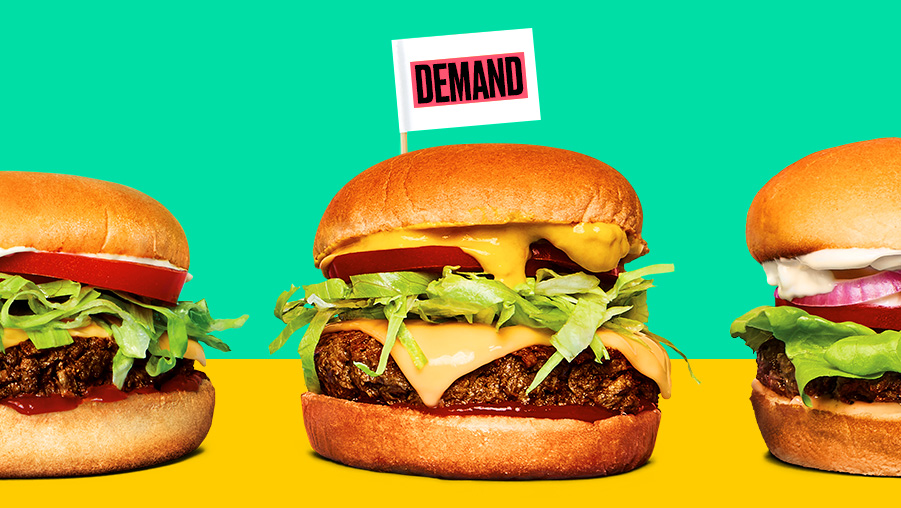 And the full-frontal umami deal was why it was so interesting that so many flavors worked well with it, while others didn’t. Cheddar cheese – total winner. No cheese – total winner. Swiss cheese – not even close. Because it’s so fully seasoned, the cheese (or lack of it) should be at least as kicky. Mayo – yes, works well. Mustard – all day long and all kinds (dijon, yellow, grainy). But ketchup? Not so much. Sweet BBQ sauce? Absolutely not. For some reason, it killed anything that tasted good about the burger. But a spicy, more well-rounded sauce? All day long. Mushrooms? You would think they would nail it, given the umami flavors going on in the burger, but it worked about as well as Swiss cheese. Even spinach was a disaster – I would pick a thick green with the bitterness of iceberg (this is officially the first time I have recommended iceberg for anything).

For buns, we were huge fans of the grilled whole wheat bun and the English muffin, but the brioche bun was too sweet, and the King’s Hawaiian bun was probably my least favorite of any we tried. The hearty texture and savory flavors of the patty really needed something more sturdy and strongly flavored to stand up and not get lost in the mix.

So how do they make this? In a lab, obviously. A genetically modified yeast creates the heme (which is soy derived), and other ingredients include coconut oil, wheat protein and potato protein. The rest appears to be super secret, at least for now. From the look and the feel, anything else would be a guess. There’s only five grams of carbs for a three-ounce patty, which would mean that there would be almost no grains, like wheat, rice or oats, and to be fair, it doesn’t look like any grains are in the mix. As I experienced, it just looks like a fancy, high-end beef and bison/elk/buffalo/fancy protein mix. And tastes just as yummy. 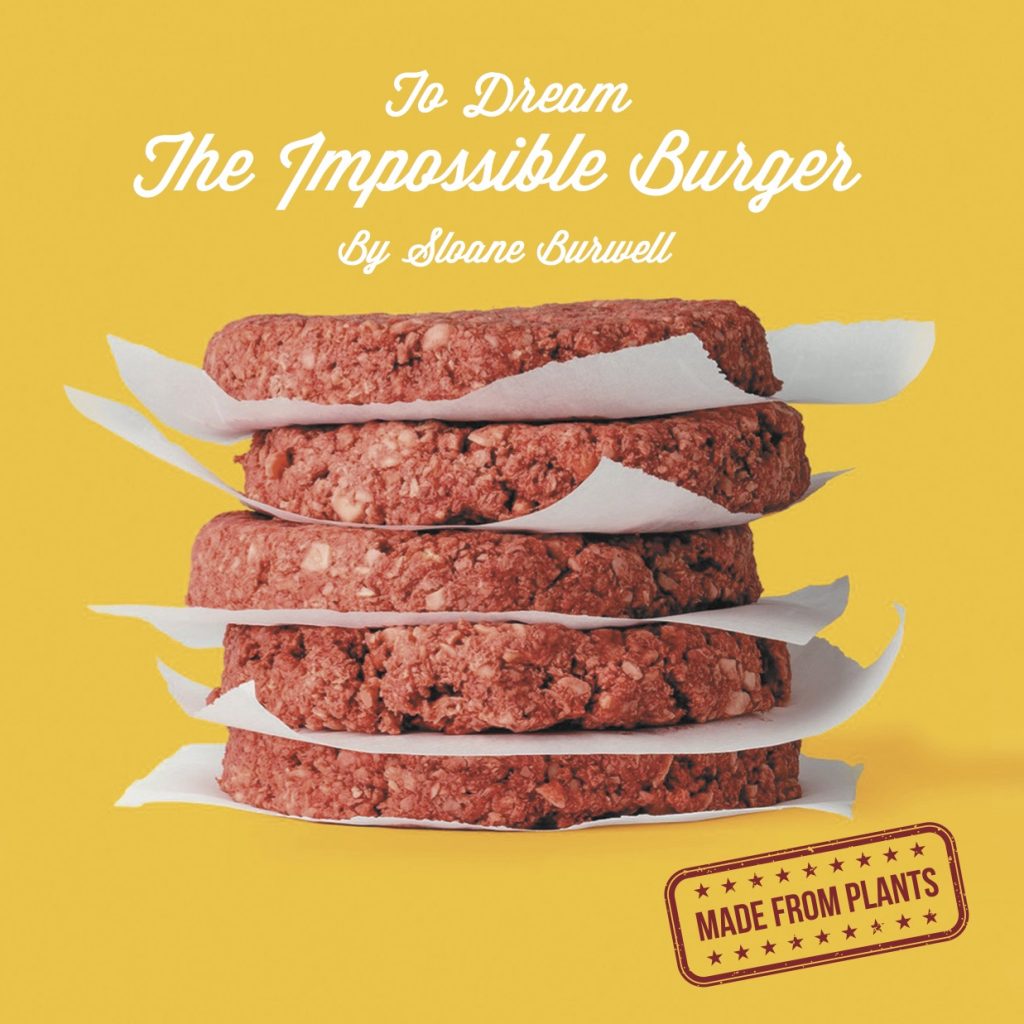 In the past, I made my poor folks eat pre-fab frozen faux meat and tried to pretend it was a burger, because if it is in a bun, it’s a burger, right? No, and the soul-crushing sadness in their eyes always said as much. But this time around, I’ll be confident enough feeding an Impossible Burger to them, unawares, and telling them it costs almost 20 bucks (with the bacon upcharge it’s pretty close). And you know what? I’m pretty sure they will debate the merits of a burger that expensive, and not the fact that it isn’t even real meat. I can’t wait.