When Lord Kash of The Stakes arrived for our interview at The Lost Leaf, his bandmate Ben Scolaro asked him how his day was going. “Everything at once,” the day-worn Kash replied, and with a deep breath, he shook off what residue remained from his day and rose to face the present. “Let’s do this.”

If you didn’t already know, Phoenix is quickly becoming a hotbed for jazz fusion of various forms. In the last five years, the city has seen many of her hometown bands rise from house parties and small clubs to the larger stages usually reserved for national touring acts. Last month, Phoenix Afrobeat Orchestra held their Laugh to Keep from Crying album release party to a packed house at the Van Buren with Jerusafunk, The Stakes and many other special guests. All three of these bands include musicians who claim jazz influences. But to put it simply, Phoenix is inundated with musical talent­­, and it’s time to go out and grab a ticket. 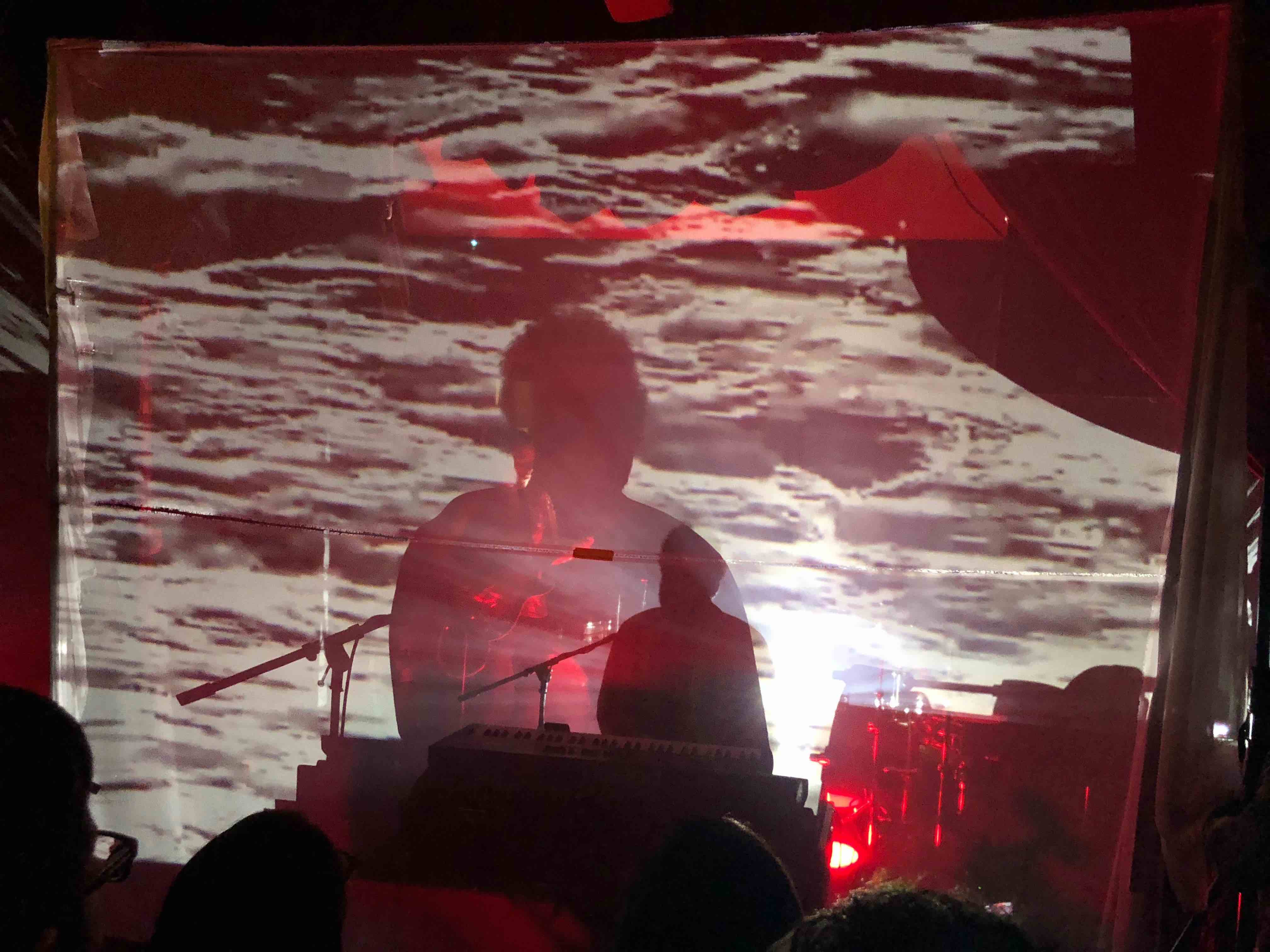 We start with Alassane, the brainchild of keyboardist Greg Diarra, joined by drummer Caleb Michel of the Afro-Cuban All Stars and bassist Bailey Zick of Jerusafunk.

On a Tuesday night in February, Alassane appeared at The Lost Leaf for what was only their third show. A series of strobe lights silhouetted the trio against a drawn curtain that separated them from the unsuspecting crowd, and the music began. From there, the listeners were quickly transported far beyond any conceivable expectation.

Diarra’s haunting vocals sailed over contagious synth hooks and ominous bass lines as listeners rejoiced in awe at the Wizard of Oz–like spectacle that played out before them. Michel’s drumming was sublime and emotional, with equal parts beauty and violence. Heads bobbed and bodies swayed as all were drawn to a single breath. If you had a pulse, you could feel the music within each and every vein of your being, straight down to your bones, where it cleansed your spirit and illuminated your soul, forcing you to question pain, accept truth and honor beauty.

“It’s been a work in progress for quite a while,” Diarra tells me outside a recent gig at Arcosanti, the arts community located just north of Phoenix. Diarra mentions a few influences in contemporary jazz – Kneebody, The Bad Plus, Tigran Hamasyian – and he refers to these artists as contemporary heroes. Much of Diarra’s inspiration for this project comes from the simple fact that he’s been listening to these artists regularly for quite some time.

Even though Diarra has found influences in jazz, he doesn’t consider himself a traditional or even legitimate jazz musician. Instead, he prefers to refer to himself as a pop songwriter. In Diarra’s view, it’s not so much that jazz is back in vogue, as it is that the listeners of pop music have become more sophisticated.

“There seems to be an expanse at what an audience is able to hang with. Our ears are evolving,” Diarra explains. When asked to describe the genre of the music he writes, Diarra admits that his goal is for such an explanation to not be possible. When pressed, he offers the long-winded tag, “contemporary art-rock, influenced by prog-jazz.” 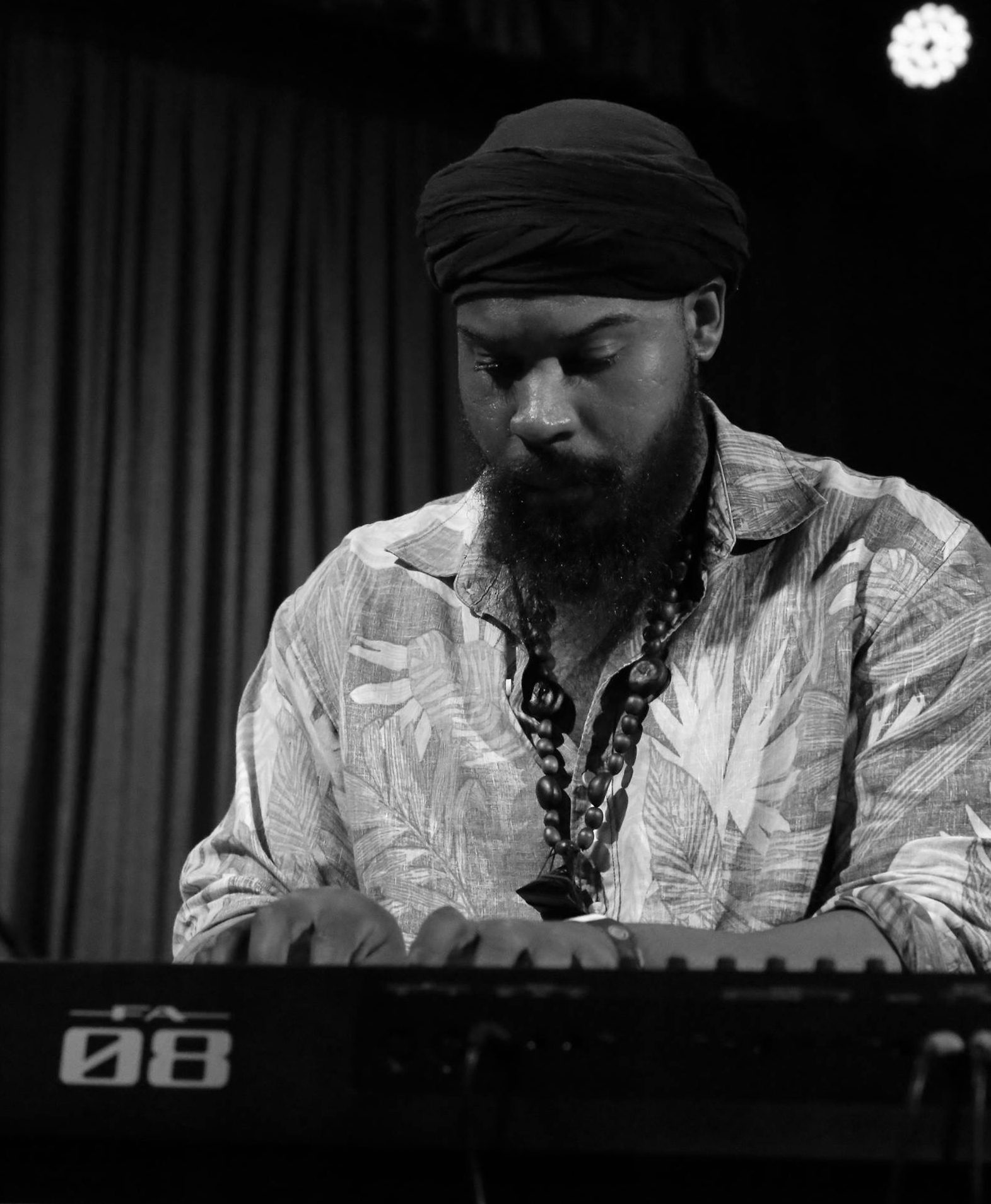 Geibral Elisha of The Geibral Elisha Movement has a different name for their version of the alt jazz genre, which he explains was coined by David Moroney (aka Mitch Freedom) of Phoenix Afrobeat Orchestra: spiritual jazz.

Elisha is equal parts musician and spiritual explorer. His shows are largely improvised and do not include lyrics. His bandmates are an ever-revolving cast of virtuosi, intent on pulling the spirits of the crowd through the depths of the unknown and up to the peaks of imagination.

Elisha is not like most of the other jazz musicians in town. He did not study jazz in college or spend time memorizing the standards note for note. “I don’t think that’s what guys like Miles Davis or Bill Evans wanted us to do,” Elisha says. “They were playing their own music, which is often overlooked.”

Phoenix’s own KJZZ first introduced Elisha to jazz. Elisha’s father was a regular listener of NPR talk radio, and he would often leave the radio on throughout the day. At some point in his youth, Elisha began to notice that the station would switch over to a different kind of programming at night. “I didn’t know what it was,” Elisha explains, “if it was music or magic. I just knew I liked it and I had to learn how to play it.”

After his discovery, Elisha told his parents that he wanted to learn the piano. He took a few introductory lessons before he resolved to learn the instrument on his own by ear. “I probably sight read [music] only as well as a second grader reads a book,” admits Elisha, explaining that he aimed to find a way to tap into something greater than himself. From that source, along with years of practice, he was able to find his own musical path. Like Diarra, Elisha feels that his project has been years in the making, and he says that after a long time of playing like other people, he’s finally begun to play like himself.

Elisha credits Phoenix’s musical renaissance to the large amount of diversity in the city. Music like salsa, jazz, samba and bossa nova were all a result of cultures coming together. “When you bring cultures together and they mesh, beautiful things happen,” says Elisha. “That’s what we have in Phoenix, a melting pot.” 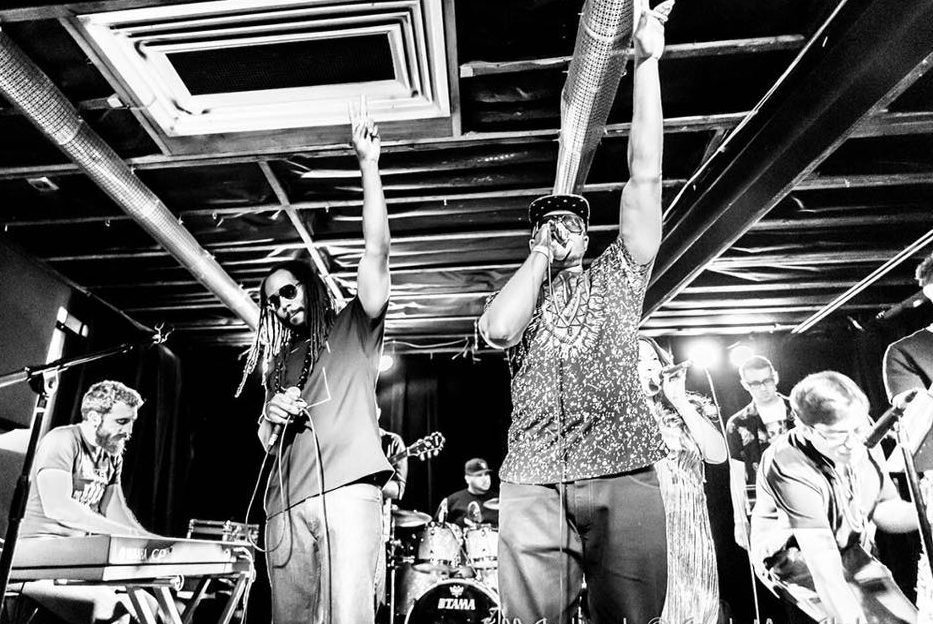 While Alassane and The Geibral Elisha Movement are more closely aligned to progressive experimental jazz music, there are other artists in Phoenix who are incorporating jazz in different ways. The Stakes are often referred to as a hip-hop band, but anyone who has been to one of their shows can tell you that they exhibit a multitude of musical stylings.

“The Stakes have something for everyone,” says pianist and founder Ben Scolaro. “There’s definitely hip-hop and R&B in our music, but our jazz backgrounds influence our harmonies and arrangement choices, and from there you’ll find rock ’n’ roll, soul and even classical music.” Scolaro explains that on their song “Unified,” the band employs a classical chord structure in a hip-hop and rock fusion that’s unlike music you’ll find elsewhere.

Lord Kash, one of two MCs for The Stakes, remarks, “This group is essentially people who don’t speak the same language coming together to communicate through music.” For The Stakes, it’s all about community and bringing diverse listeners together. Lord Kash notes that this mind-set has enabled him to take hip-hop to places it doesn’t normally go. Perhaps the clearest representation of The Stakes’ spectrum was exhibited when they went from playing a show at The Nash, Phoenix’s most revered jazz club, to a show at the Van Buren, opening up for hip-hop veteran Too Short, in a single day this past February. 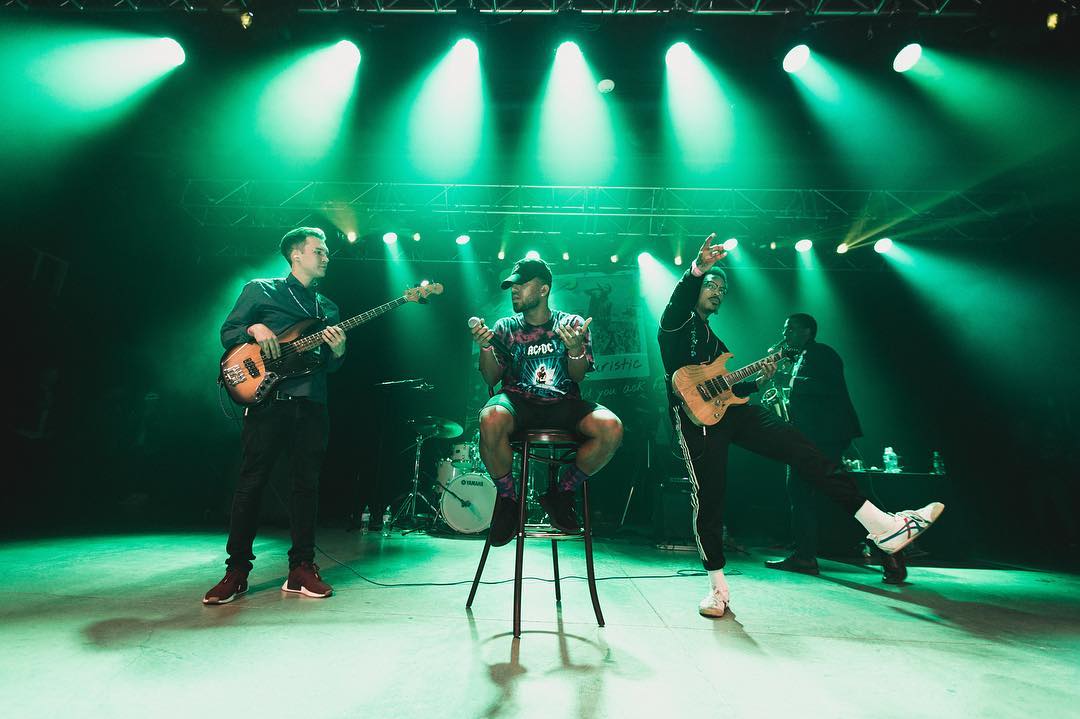 Another Phoenix band that blends hip-hop with jazz is The Color 8, but that’s pretty much where the comparisons end. The first time I encountered The Color 8, they were in the middle of a head-banging rock jam reminiscent of Rage Against the Machine, with guitarist Kal Benion wailing his way through a raucous solo.

Once the song ended, the band switched things up and went into what I can only describe as cool jazz. Saxophonist Austin Charles, dressed in recital attire, played the crowd a sweet, sensual solo that evoked dream-like imagery. He was joined by vocalist Lee Water, who cooed R&B vocals while bassist Jeremy “Jerm” Smith kept a cool bass groove over Emmett Nash’s tight pocket on the drums. But then, just as quickly as before, the band launched into their most vicious song, “Raw,” in which Charles puts down his horn and transforms into his alias, The Dapper Rapper. He was joined by MC Clev Pro on the mic, and the pair proceeded to tear the audience from their comfort zones into the palms of their hands.

On a phone call while on a recent tour, Charles explained that the band often doesn’t know what songs they’ll perform until they get up on stage. “It all depends on the energy,” he says. “There’s nothing wrong with having something structured, but if the energy shifts, what you had planned might not go with the energy that’s there in the present moment.” 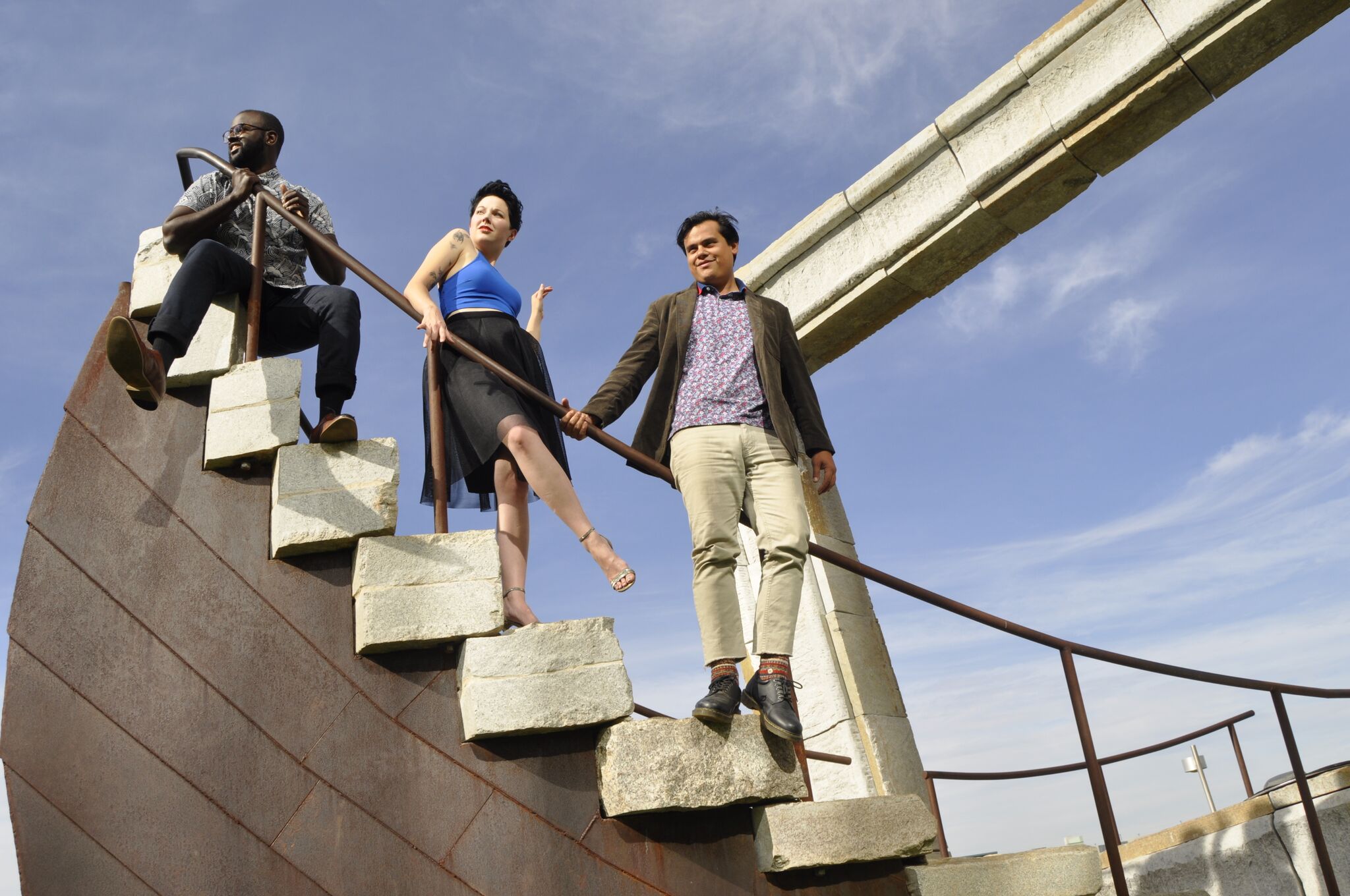 Garrison Jones, the keyboardist for House of Stairs, cites free expression as the cornerstone element of the band’s music. The group is made up of Jones, vocalist Holly Pyle, drummer Stephen Avalos and saxophonist Shea Marshall, along with a revolving cast of guest members in their live performances. The band formed after Pyle, Jones and Avalos met while performing around town at the various jazz jams, like the one held on Sunday nights at The Nash. Not long after their inception, the trio began to write their own original music.

The members of House of Stairs each have different musical backgrounds, including studies in classical music, progressive rock and even metal. But according to Pyle, the music consistently finds itself in jazz.

Pyle utilizes a loop machine to create spacious vocal harmonies that fit perfectly with Jones’ melodic sorcery and Avalon’s relentless drumming. The band likes to change the rhythm, tempo and key signatures of their songs to keep themselves and their audiences interested. As a result, no two House of Stairs shows are the same. “We’re constantly trying to test the boundaries of a piece,” says Pyle. “We want to keep our songs present, and we’re constantly changing, so we try to make the music change with us.” 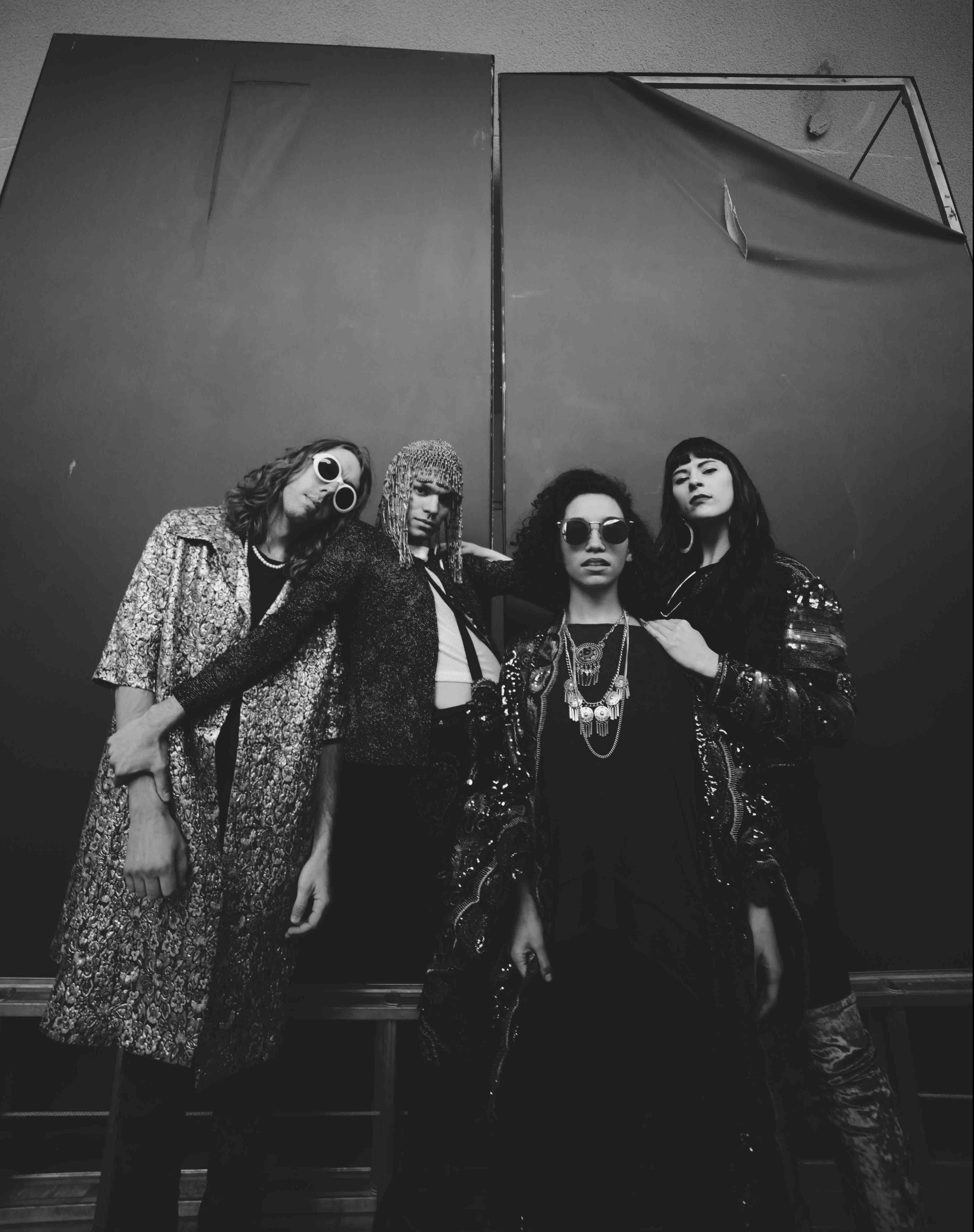 One of the most recent additions to the Phoenix music scene is the neo-soul/jazz-funk project Hyperbella. The band comprises guitarist Cassidy Hilgers, pianist Carly Bates, bassist Brenden McBride and drummer Marcus Leatham.

Hyperbella has been together for less than a year, but they’ve already managed to create an impressive sound that is both cathartic and danceable. Their soulful melodies are tied together by tight funk grooves, transcendent solos and powerfully enchanting harmonies. Any fan of Hiatus Kaiyote will quickly find a new local favorite in Hyperbella.

Many of the musicians mentioned here grew up in Arizona and credit the state’s various high school and college jazz programs for introducing them to the possibilities of jazz and performance. More than a few of the musicians wished to pay their respects to those musicians who came before them and paved the way for jazz in Arizona – many of whom still perform in Phoenix. Whatever your taste, do not miss this amazing alt jazz music happening around this great city of ours.