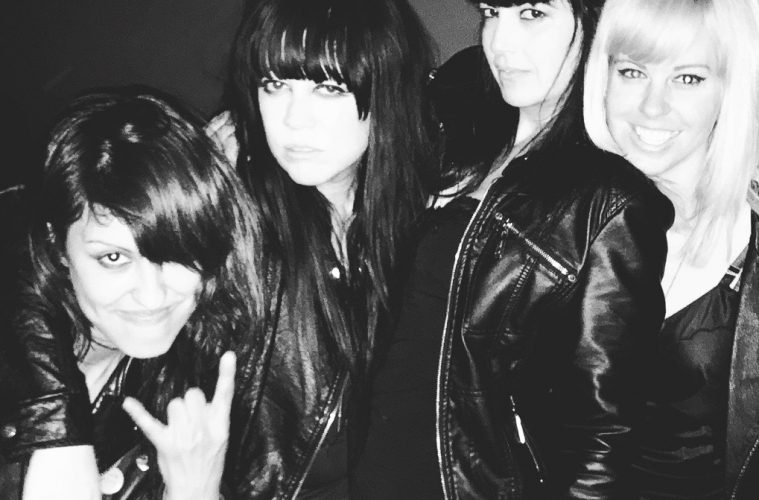 The Darts Are On Point 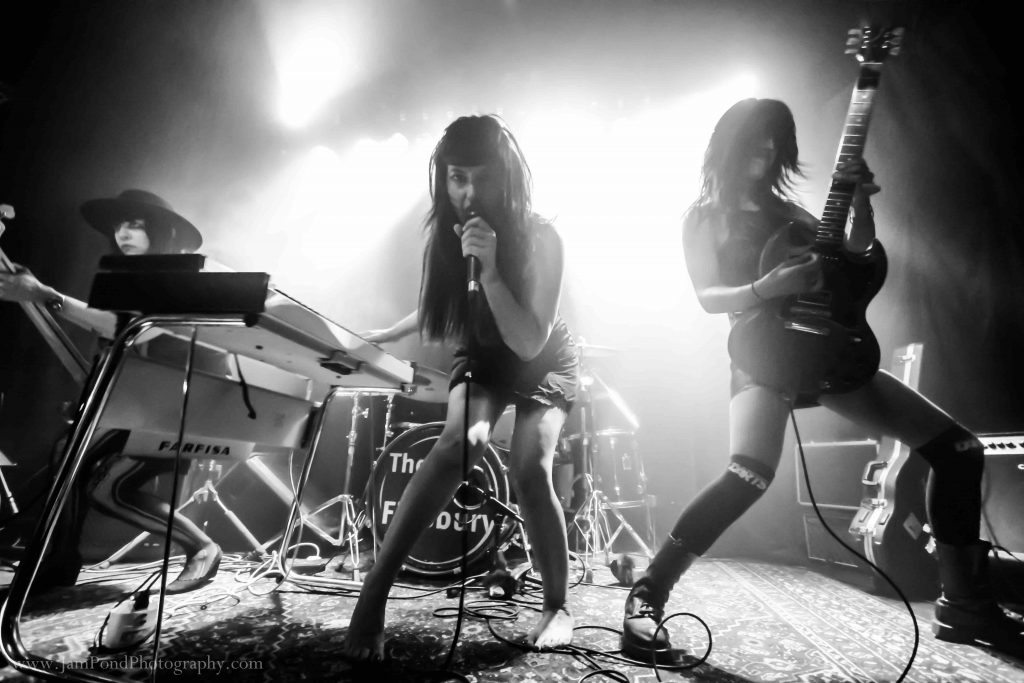 Since their inception in 2015, The Darts (following the UK’s “Darts” by about three decades) have been circling music communities in Phoenix and LA and soon the world, like a predatory jungle cat ready to pounce and devour its prey.

Led by Phoenicians Nicole Laurenne on organ and vocals and Christina Nunez on bass and vocals, The Darts are rounded out by Los Angeles area–based Michelle Balderama on guitar and vocals and Rikki Styxx on drums and vocals. The combination of these four talented musicians is nothing short of spectacular. This is a whole new level of “Girl Power,” but let’s get one thing straight: forget about gender for a minute, The Darts are a good f*cking band.

Just because they happen to be four attractive females who look great in all black, The Darts are no gimmick and are definitely not to be taken lightly. Give a listen to their latest release, Me.Ow. on Dirty Water Records (Laurenne is an owner of the US partner, and Nunez provides A&R work), and try not to get sucked in immediately by the fuzzy, hypnotic bass of opener “The Cat’s Meow.” As the record goes on, it actually gets stronger, which is nice in this day of artists cranking out one or two good songs and surrounding them with filler. 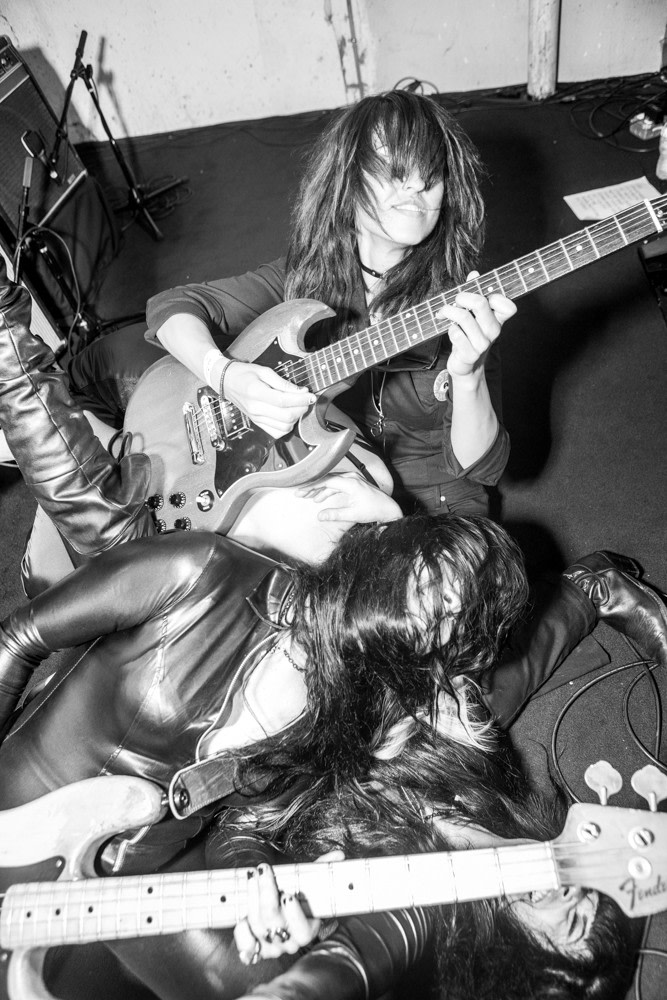 With strong nods to garage heroes like The Cramps, Fuzztones, Thee Headcoatees and The Trashwomen, fans of killer organ-driven, fuzzy garage rock with swagger and soul need to get on board this train right now. Songs like “Get Messy” and “Gonna Make You Love” show a combination of ass-shakin’ groove and psychedelic muscle that lesser bands can only aspire to.

Laurenne and Nunez are seasoned vets (and really, leaders) of the garage scene here in Phoenix, having been part of local favorites like The Love Me Nots, The Madcaps and Zero Zero. Balderama spent time in LA’s Brainspoon, and Styxx drums in LA’s The Two Tens and The Dollyrots, in addition to handling the skins in The Darts. As 2018 unfolds, the band will be extremely busy with multiple trips to Europe in the works and a possible Japan tour later in the year, as well as a slate of releases ready to dot the calendar.

In an effort to get to know the busy band a bit better, we exchanged some emails and instant messages over the first few weeks of December. Here’s what we learned:

So Nicole, you and Christina both live around downtown Phoenix. What do you like about it?

Nicole: I like being able to walk to Durant’s, Pino’s and Oven & Vine, and I like all the old houses and great venues nearby. Downtown is so fun these days.

Rikki and Michelle, how has it been for you to spend a lot of time here in town?

Rikki: I love Phoenix because I love hanging out at Nicole’s house. We just “girl talk” and drink tequila and try on outfits. It’s everything you’d want to happen when four girls in a band get together. We made our last video there in her backyard and dressed as mermaids and threw cake at each other. So, to me, Phoenix is rad and some of my favorite venues are there: Valley Bar, Rebel and Crescent.

Michelle:  Phoenix has been amazing to us and it’s become a second home for me. I’ve been a fan of many bands from Arizona for quite some time. Their acknowledgment has brought us support in building success outside of Phoenix.

Michelle, tell me about your musical path. What have you been up to?

Michelle: Being brought up in a musical family, learning to create and play music came naturally. One of my early influences was my school band teacher, with the amount of love and dedication she put into knowing how to play over 10 instruments.

My father was one of my biggest influences. All his stories about playing, writing and recording music had a huge impact on my buying of my first 4-track recorder and falling in love with the creativity of songwriting. My first band was Brainspoon in 2005 and we made two amazing records. I spent most of my 20s practice/writing/recording and performing in Los Angeles. To this day, that was still some of my best work in songwriting.

A lot of the first songs I contributed to The Darts were extra songs I had sitting on my 8-track that I didn’t get a chance to record in Brainspoon. [This] all led up to writing some songs with Nicole and joining up with Rikki and Christina to record a few tunes in 2015. 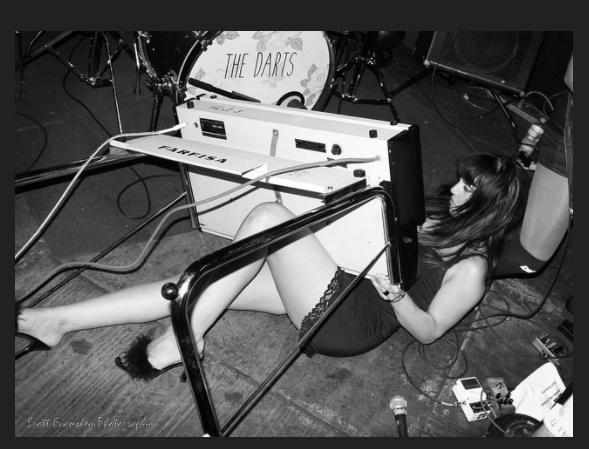 Why are The Darts a great fit for you?

Michelle: The drive that each of us has to pursue the mindset that anything is possible. Second, the amount of fun we’ve had in the process. It’s been so amazing the dreams that have come true this year, pretty epic!

Teaming up with Nicole has been so wicked cool! Finally being able to pursue the passion of creating music [with someone else] is a priceless feeling. We’ve been able to accomplish so much in just being around for a year now [as a live act]. It shows that anything is possible with this band and I am so grateful to be a part of it all.

Why are The Darts different from other bands you’ve been in?

Nicole: Darts are different because all the band members are in it to see the world together and share as many good moments as possible on and off stage, which is equally as important to us as making the best noise we can come up with. When you prioritize fun, food, sights, laughs and wonder as much as creativity and all the usual band goals, it really changes everything. Everyone just values each other more as friends and people, and it turns into the best freaking international slumber party ever.

What would you like people to take away from a Darts show besides lots of records, t-shirts and posters?

Ricki: What I would like people to take away is how much we love the music we play. I think some musicians go thru the motions but we give everything with every note, every hit, everything.

What, if anything, would constitute a Darts pre- or post-show ritual?

Christina: Usually after driving all day, we will load in and sound check at the venue and then scramble to go see as much cool stuff in whatever city we’re in before we have to go back to the club. Then usually we’re sitting in a green room running through the set and trying to find all of our lost pantyhose, phones, etc. 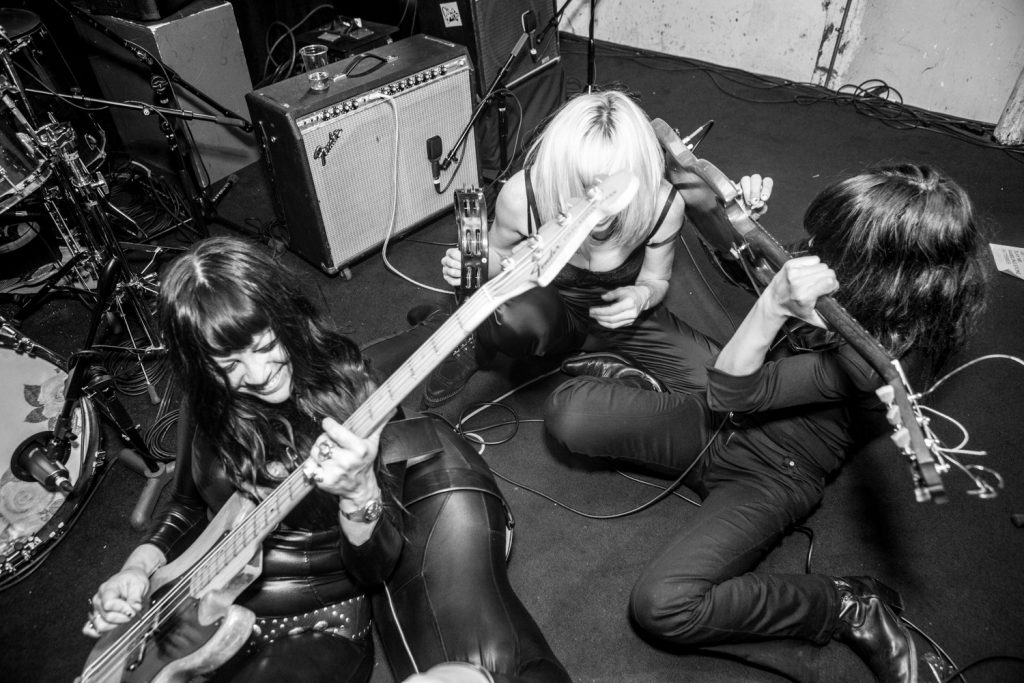 That sounds like a lot of fun. What makes a good rock and roll show?

Michelle: It always comes down to the fans, helping to make it an epic night, because without them, [there is] no show. We feed off the crowd and they feed off of us and that connection is what makes a great rock ’n’ roll show. As a passionate fan, music has brought me a sense of happiness throughout my life. Becoming a rock ’n’ roll entertainer and being on the other end, I hope I can inspire and spread the positive vibes.

What is your gut reaction when people refer to The Darts as a “girl band”?

Ricki: I love it, because we are.

Christina: Haha! It’s just funny because no one is like, “This all-dude band is awesome.” It’s also just so nice to have a band filled with girls who can play the shit out of their instruments, at last! It’s a whole new kind of rad experience.

Nicole, why are keyboards so underutilized in rock ’n’ roll today? Or are they?

Nicole: Keyboards have always been underutilized in rock, speaking from a possibilities standpoint. But I don’t think that’s a bad thing necessarily. Keys don’t always provide enough hard-hitting attacks to speak well in the rock genre. They work best when there is a good spot for a melodic line or a pad underneath, or a gentler rhythm part than a guitar might offer. So, it makes sense to me that they don’t always fit.

What are some of the band’s biggest influences?

Michelle: I have such a huge range of influential bands, I would say for this band: The

Christina: Billy Childish, Holly Golightly, The Trashwomen, Nick Cave, any band Ian Svenonius has ever had, Marc Bolan and so many more. 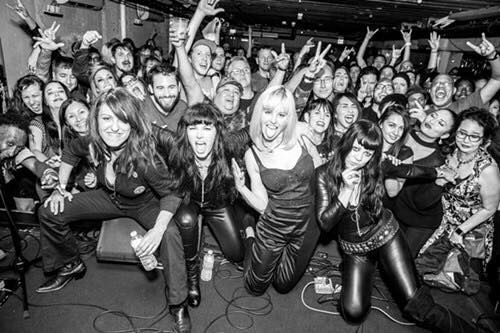 What other local bands do you love?

Christina: I feel like there are a lot I don’t know about since I haven’t gone out much lately but love Scorpion Vs. Tarantula, French Girls, Shovel, Playboy Manbaby, The San Jacinto Death Row Prison Band.

Nicole: Ultimate Phoenix show: The Darts, Playboy Manbaby and Shovel, either playing at every local record store during the course of Record Store Day, or during an Arizona-labels-only record swap event, which I would love to put together in 2018.

What’s the perfect length for a song?

Christina: Depends. Some songs say it all in a minute and some songs can go on for 15 minutes and I still won’t want it to end.

Favorite Darts song to play? Why?

Michelle: “Gonna Make You Love” because I actually get to sing main vocals. It features a lot of tape echo, which is a new sound element added on this latest record. I’m excited to capture it live. There’s even a groovy music video that we recently put out for it.

Christina: “Evil Wayz” because it’s so heavy and is filled with triplets [musical term, not three babies]. I love that.

Nicole: “Strange Days” because I love pulling my Farfisa down on top of me during the bridge (much to the chagrin of my legs which are later covered with bruises), and “The Cat’s Meow” because it is just so dang sexy.

Rikki: Whatever is first on the set list because that’s when we get to really hear the room for the first time and get to see what we are in for as far as the crowd goes. 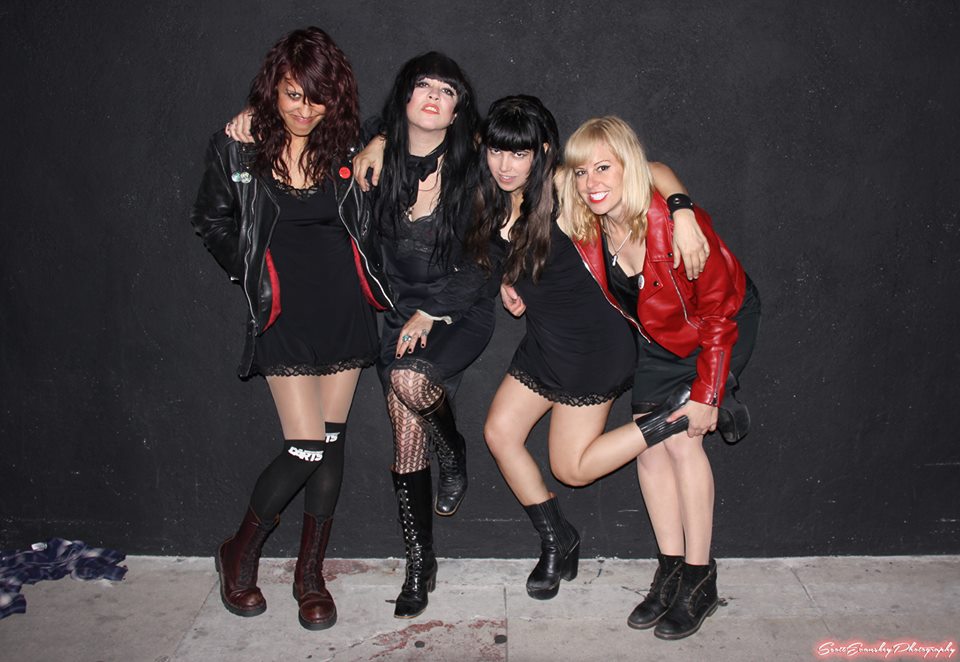 Christina: 2018 is already looking very fun for the Darts. Lots of touring, festivals, Europe and maybe Japan. We will be able to have fun together and see tons of cool bands, play really amazing shows and see sights all over the world.

Nicole: We will be recording four new songs by February, for release on various split 7”s with other artists [like Japan’s Mellvins] and labels [like Alternative Tentacles] that we love. Then we’ll do another six to eight songs before we leave for Europe in April. By August, if all goes well, we might have the next record ready for release. And then we are planning a November tour in Japan with The Fadeaways. Probably several more videos will seep out of us too, as the year goes forward.

Michelle: We strive in making records, baby! Playing lots & lots of festivals and touring the world, one day at a time. Rock ’n’ roll must be saved!