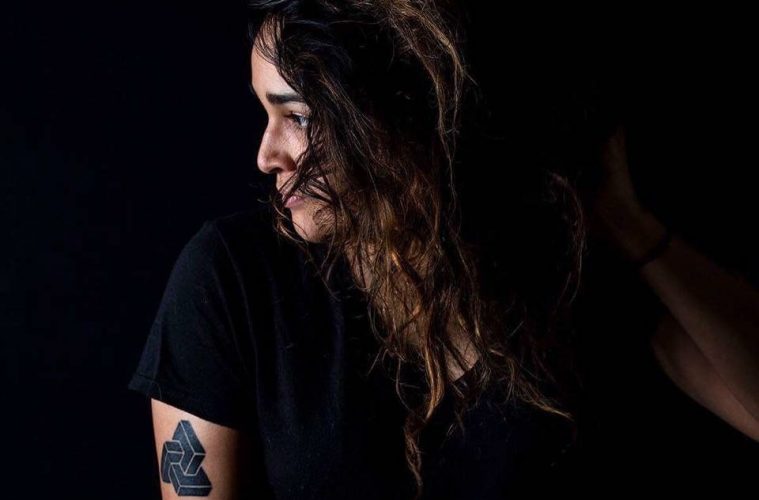 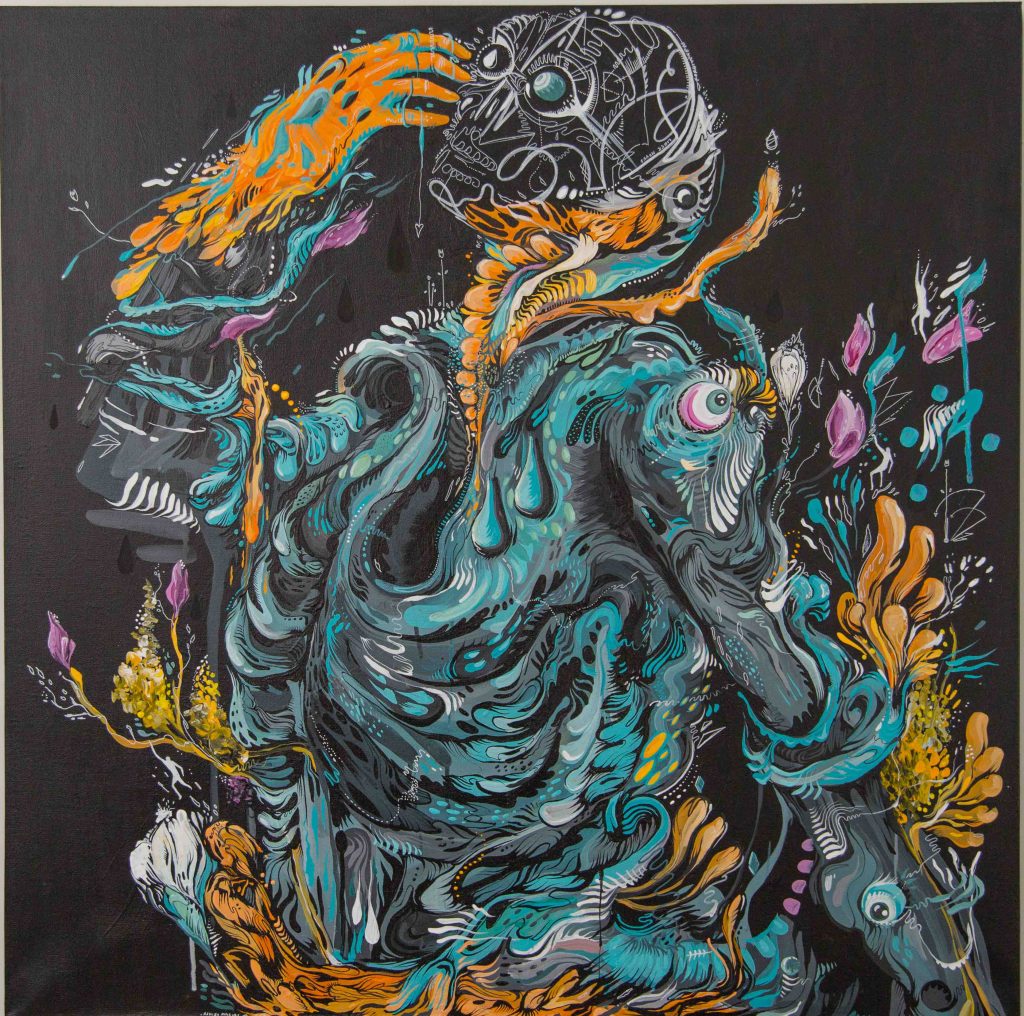 While waiting for our meeting at Gracie’s Tax Bar on the day before one of the biggest First Fridays of the year, I take in the decor and sip a beer. It’s late afternoon, and Ashley Macias is texting me, telling me she’ll be a bit more delayed, as she’s still waiting for a completed painting of hers to be delivered to Legend City Studios for Chaos Theory 18. Gracie’s has also commissioned her to paint a mural on their patio, just days before Macias leaves for Mexico City indefinitely. Aside from meeting me, she will be participating in Chaos Theory, completing this last-minute commission, delivering more of her pieces to collectors and attending the wedding of a close friend.

Macias finally arrives in a frenzy, still catching her breath. I thank her for meeting me and she replies, “Of course! I don’t really know how to say no, anyway. I’m always like, ‘Yes! Yes! Yes!’ but then I end up tearing my hair out. I’m just stoked for things. New projects, anything. I just want to do as much as I can before I go. A lot of people want me to do pieces. They’re like, ‘Oh, you’re leaving? Oh, let me get a piece now!’” 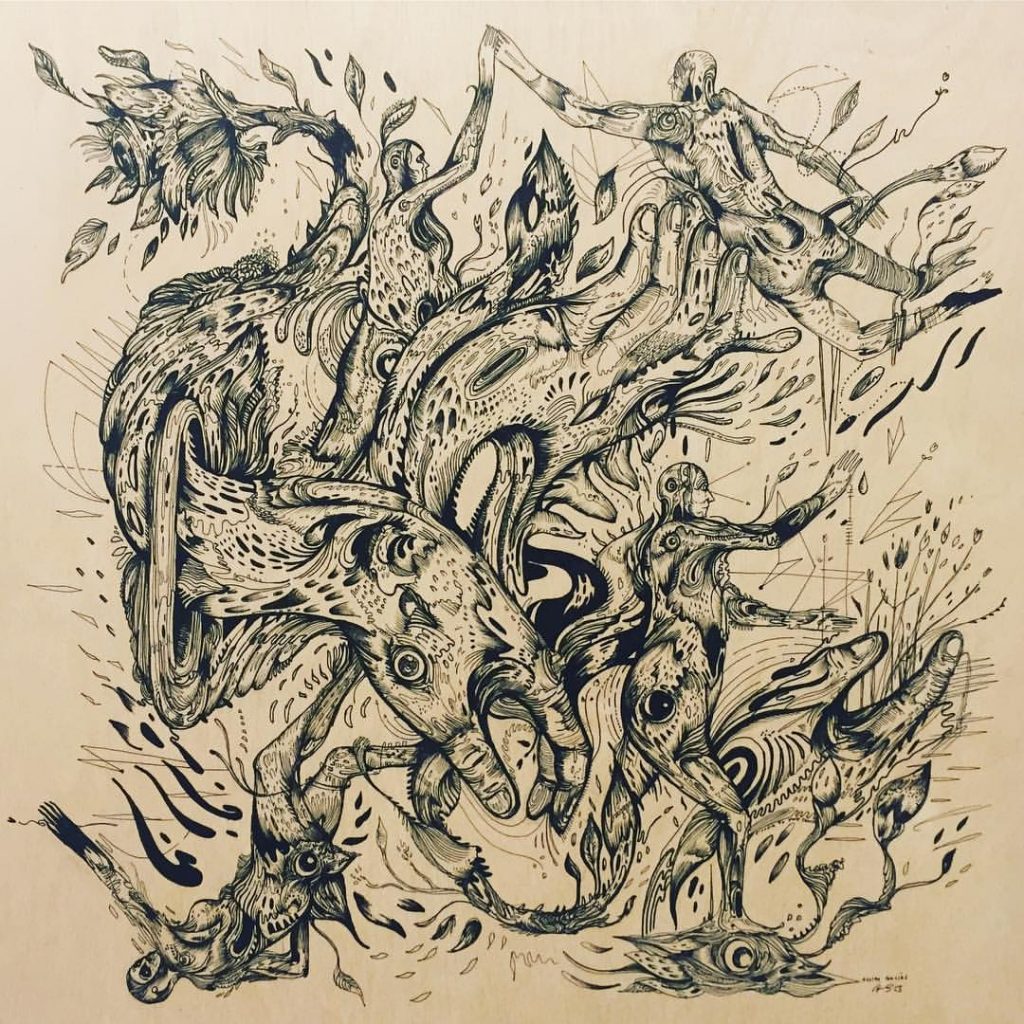 The recent weeks of unrelenting tasks are a side of this artist’s life that the general public doesn’t often see. “There’s not that much time in the day,” Macias says. “It’s not just the process of getting a painting done, it’s also getting it over to someone. There’s really not enough time. That’s probably why I don’t sleep. I want to have time to paint.”

Macias has been a fixture in downtown Phoenix for several years, and has amassed a very large body of work, including canvas paintings, illustrations, murals and live interactive pieces. She has even painted her surreal creatures on live humans for Canal Convergence, among other events. While the past week for her has been a prime example of the behind-the-scenes stresses of an artistic life, Macias can’t imagine a different lifestyle. 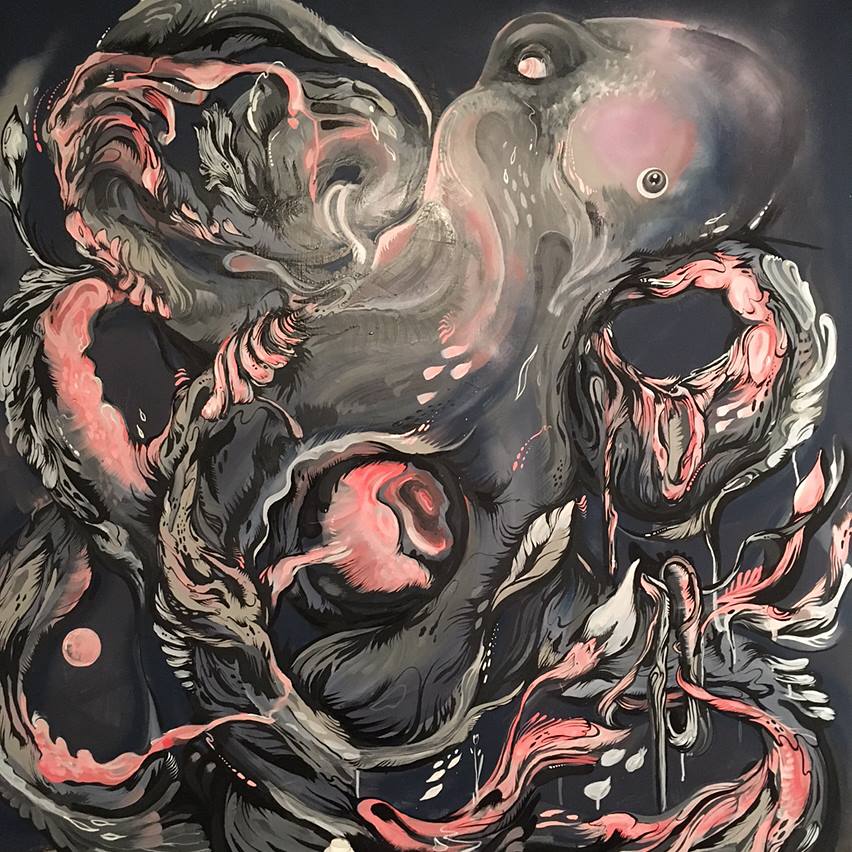 “Every now and then, as a joke to myself, I say, ‘What was I thinking?’ I feel like I’ve always created, so [being an artist] comes naturally, but I didn’t really know I could do anything with it. I wish I had known. I could have done something with it sooner, but I feel pretty good now. It just feels like what I’m supposed to do—my lifeline. It’s difficult, but everything’s difficult at some point, and when I take that deep breath, I’m happy. I feel like I’m getting better every year.” 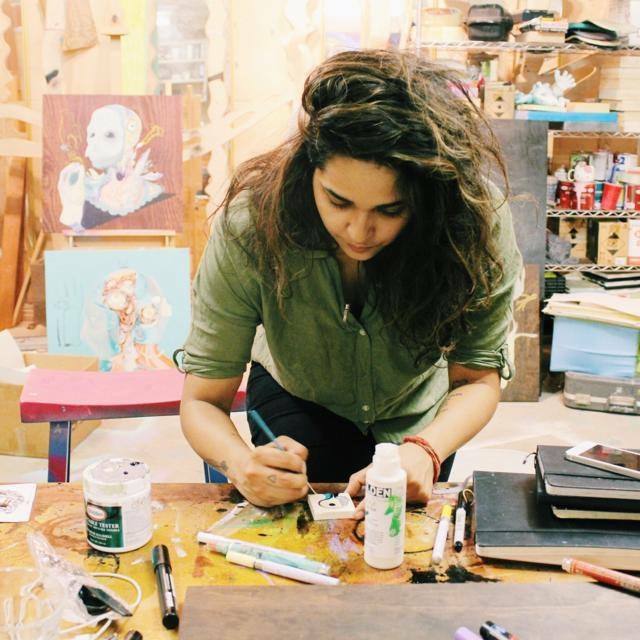 Macias’ approach to creating rides the line between having a deliberate goal in mind and allowing the work to take on its own shape. “It’s a little of both depending on the mood. I like to plan and have a more definitive process, but I feel like the more I grow into this, the harder it is to try and force the direction. A lot of what I do is very organic and fluid. I have something general in mind and then it grows around that. It’s hard to explain, because when I’m in the process, I feel like I’m in another place. I’d like to be a little bit more formulated, and I feel like I’m getting there as I start to understand my art better.”

While Macias is a native Arizonan, she’s venturing into Mexico for some mural commissions and to meet up with a past collaborator as part of the SEED project. SEED, an acronym for Stellar Emissions Encapsulation Device, is a project spearheaded by Devin Fleenor, a Phoenix artist best known for his work with the band Mr. Meeble and other audiovisual projects. The project is described as an artificially intelligent art installation and will be on display at Museo Franz Mayer as part of MUTEK.MX and Abierto Mexicano de Diseño from October 11th to 22nd. Macias calls it “the next level of what Fleenor is doing with AI light art. It’s meant to be therapeutic, but it’s also intelligent art.” 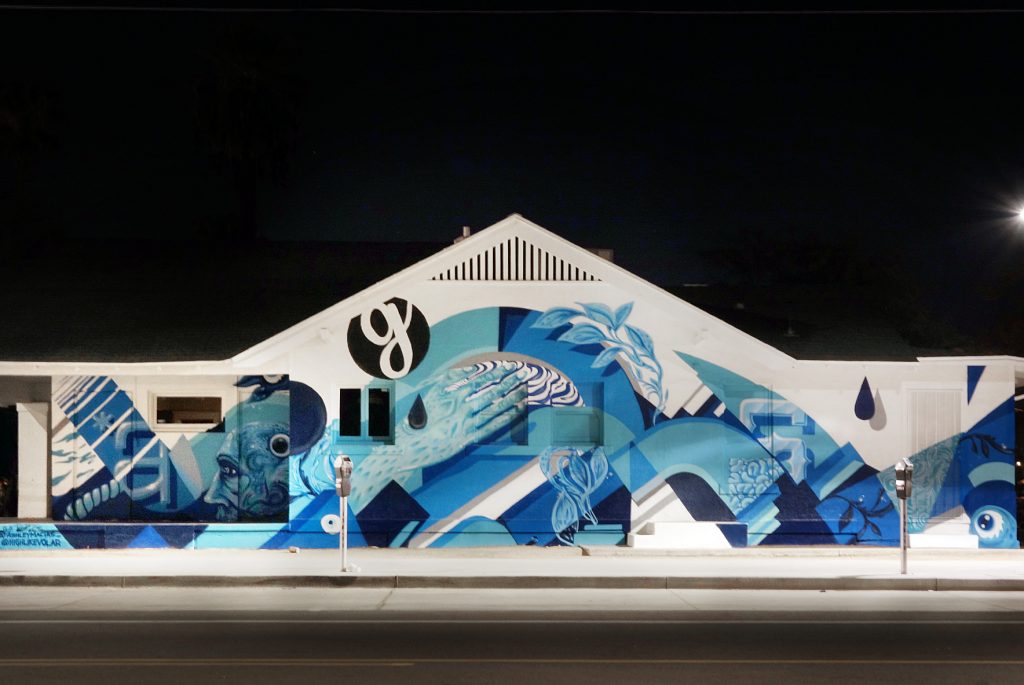 Macias’ role is loosely defined as an assistant on the project. “I just get to see what they do and learn as I go. Mostly, I’m just really great moral support!” She laughs. “You know, Devin’s an alien! He’s the only person that makes me feel normal. When I say I’m an alien, he’ll give me a look like, ‘Yeah, but it’s OK.’ He always has this genuine warmth, like, ‘It’s OK that you’re weird. Weird is good.’”

Another large-scale mural project that Macias recently completed is plainly visible to passersby at the intersection of 6th Street and Roosevelt, on the Grateful House. “I had been talking to Grateful for almost a year now, and it never really happened. Finally, I was like, ‘Hey dude, do you wanna keep having an ugly house or not?’ And he was like, ‘You’re right. Let’s get this going.’”

The former black and white abstract design strewn across the Roosevelt-facing wall was recently replaced with a monochromatic blue mural painted by Macias and another local artist who goes by the name Volar. “He’s a really good graffiti artist, but he’s also great at doing abstracts. We worked together really well. He’s really great with the [spray paint] can, so I figured if anything, it would be a good experience. We came up with a concept that was exactly what I was envisioning. That’s what I mean by really good chemistry—working with another artist that really gets what you’re thinking.” 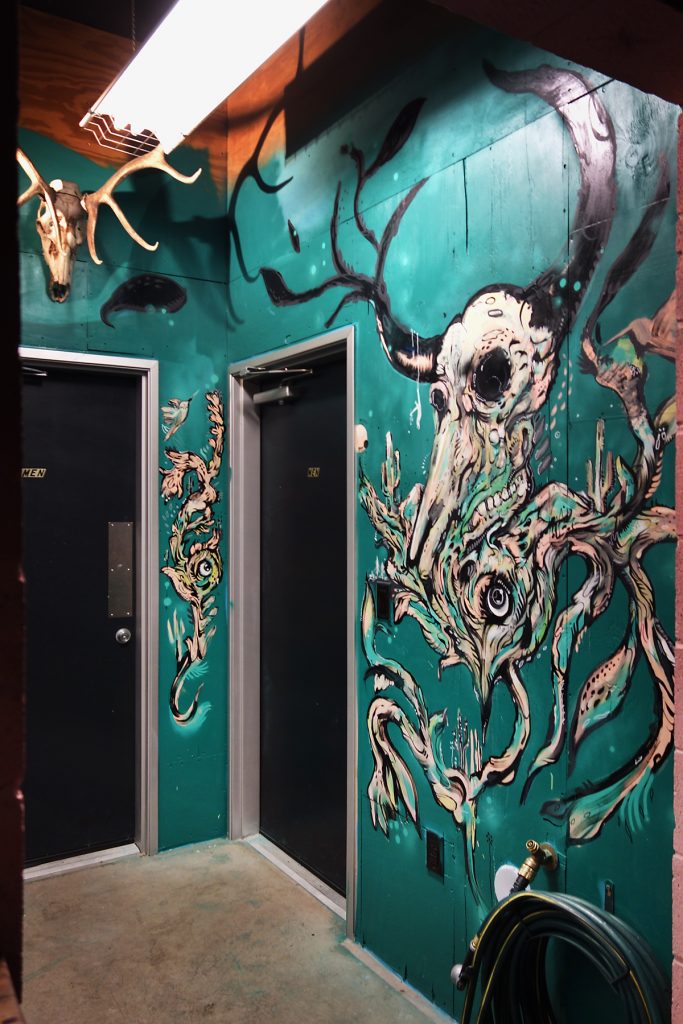 “Grateful House is going through a partner change, and they’re teaming up with USA Today. That’s why we went monochromatic blue. Grateful will be in contract with them, so there’s going to be more artwork and opportunities. I’ve been talking to the building owners, Kyle [Cox] and Justin [Rainbow], and they’re really wanting to get more in touch with the community and potentially get more artists involved. The city’s growing and this could be a really exciting thing.”

I asked Macias if she thought Phoenix would permanently lose her presence, and she reassured me that she would return. “This is home. I really love Phoenix. I feel like it made me grow up in a lot of ways, coming downtown to the arts scene and becoming part of such a supportive community, but I feel like it’s necessary to move somewhere where I feel newly inspired and bring what I have there from here and vice versa.”

Like many in downtown Phoenix, Macias has seen her life and career as an artist directly affected by the swift changes to the physical and social landscape. “I’m kinda confused about where it’s going. But I am optimistic because I feel as long as the artists are here, they can create a greater influence and awareness. Right now, I feel like the city is confused, like it’s going through puberty. I feel like having a voice is really important, but it’s also about action.” 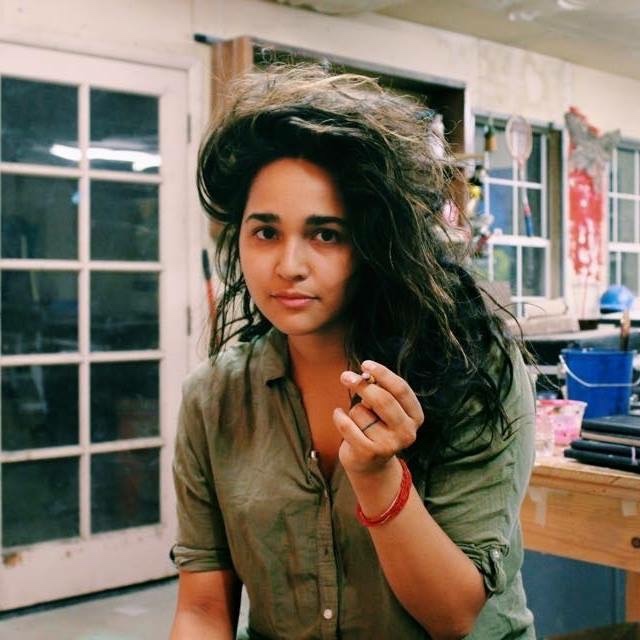 “Whether or not you like the changes, how are you going to be a part of it? There are a lot of things happening that might make us uncomfortable, but it is our duty to seek and create opportunities that make the [broader community] recognize artists. I think voicing an opinion is healthy, but action really does speak louder. It’s still a very fresh playground and there’s room for everybody. Keep creating and be consistent. Artists are the reason these changes are happening, because people want to be part of the arts. We just can’t give up that easily.”

Those who have seen Macias’ surreal and colorful pieces can immediately pick up on their depth. “Obviously my art is very personal. It’s always hardest to talk about my own work because there are so many points to make, and it comes from an internal, emotional place. My art is always about exploring deeper consciousness, the human psyche and human nature. I always try to portray this. I want to create the human element through plants, through, well, everything that exists, but also create this very deep construct of what goes beyond the human mind. What’s underneath; what really defines us as living things and how beneath it all, we are all part of that same origin, that same beauty.”