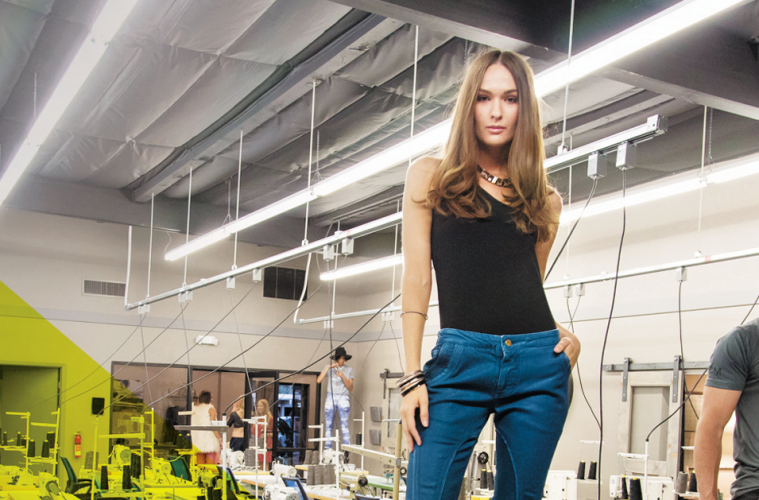 Fashion Manufacturing in the Valley

On the manufacturing floor of Scottsdale luxury jean-maker Diego Milano, fashion designer, instructor and LabelHorde directory founder Angela Johnson is giving a presentation on what it takes to get your fashion dreams into production. 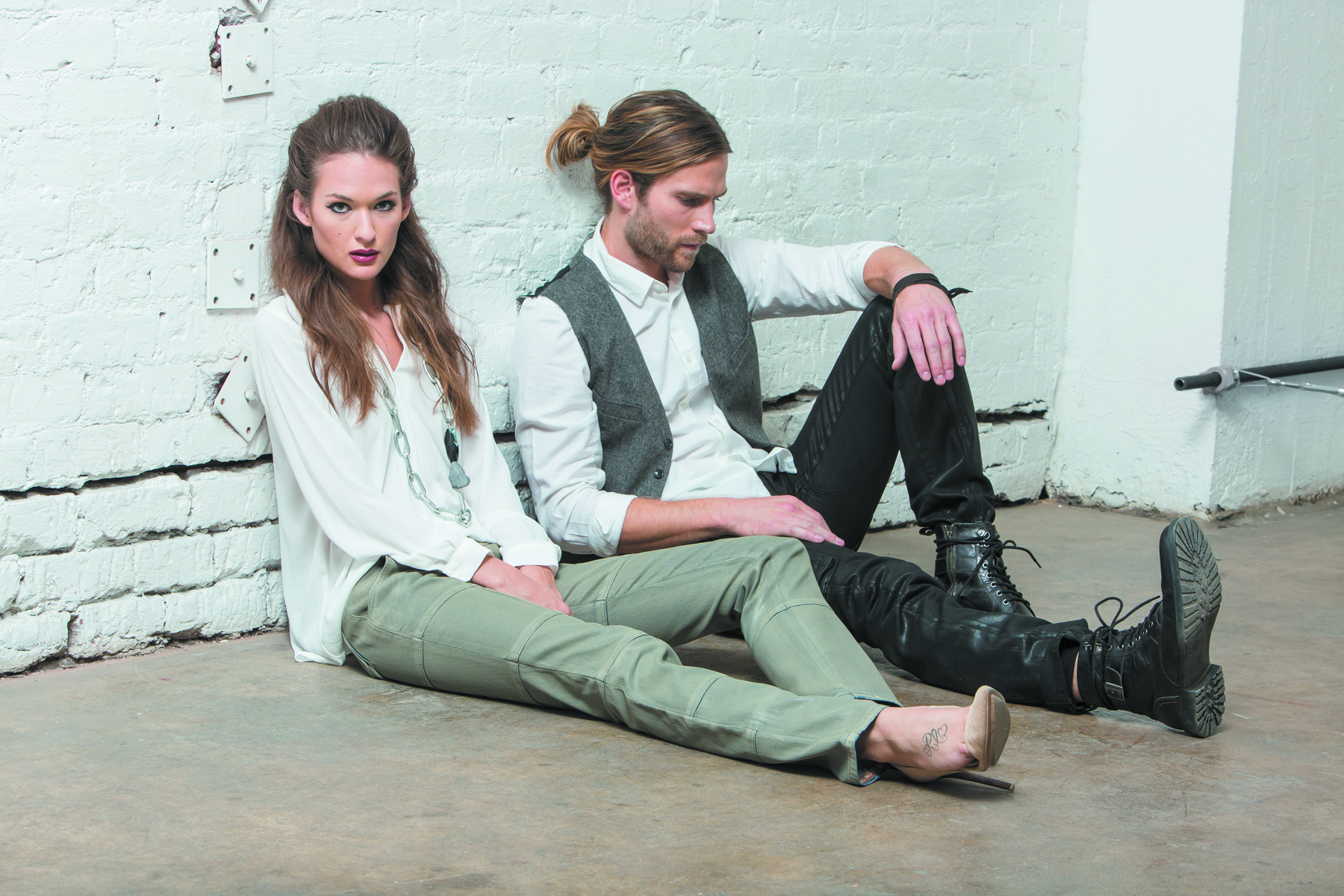 “Some people watch ‘Project Runway,’ where they do these drapes and create one-offs. That’s so not the way to do it!” Johnson declares. The process is actually arduous and costly.

“The first part of manufacturing is coming up with ideas and design,” Johnson says, “then you must develop a collection that is saleable and put together a tech pack and everything.”

An additional hurdle for local designers is that much of the industry is out of state. Los Angeles is pretty close, but it’s still not at our front door. This means a new design company has to plan on a lot of travel, often dealing with patternmakers, sewing professionals, fabric brokers and manufacturing houses. Another obstacle is getting the big sew houses to take a 50- or 100-piece order seriously, and then getting bumped by a bigger company. This puts a designer at risk of missing a deliver-by date for buyers, and missed deadlines can seriously jeopardize a start-up’s reputation.

Things are simplified dramatically when designers have the control of their operation entirely in-house. Amelia Walsh is president of Diego Milano, which started manufacturing in the Valley about two years ago. In April they moved to a larger facility to expand their production and accommodate their growing staff of more than 20 employees—up from the original four.

“We started out in New York,” in a very small studio space and with only two sewers, Walsh says, “but actually moved to California, because the West Coast was more well-known for denim.” Because their costs for production were so high, the initial retail price of a pair of Diego Milano jeans was about $1,200 (which was not even the highest of the high-cost luxury denim available).

In L.A., the company moved to the next level, completing a lot of firsts: their first full collection, first look book, and first website. L.A. was a huge learning opportunity for them. But it’s expensive to start a fashion company, especially a denim company, in a major metropolis. A lot of fashion companies move production overseas, but Chris Kay founded Diego Milano with the idea to create and keep jobs in the U.S. 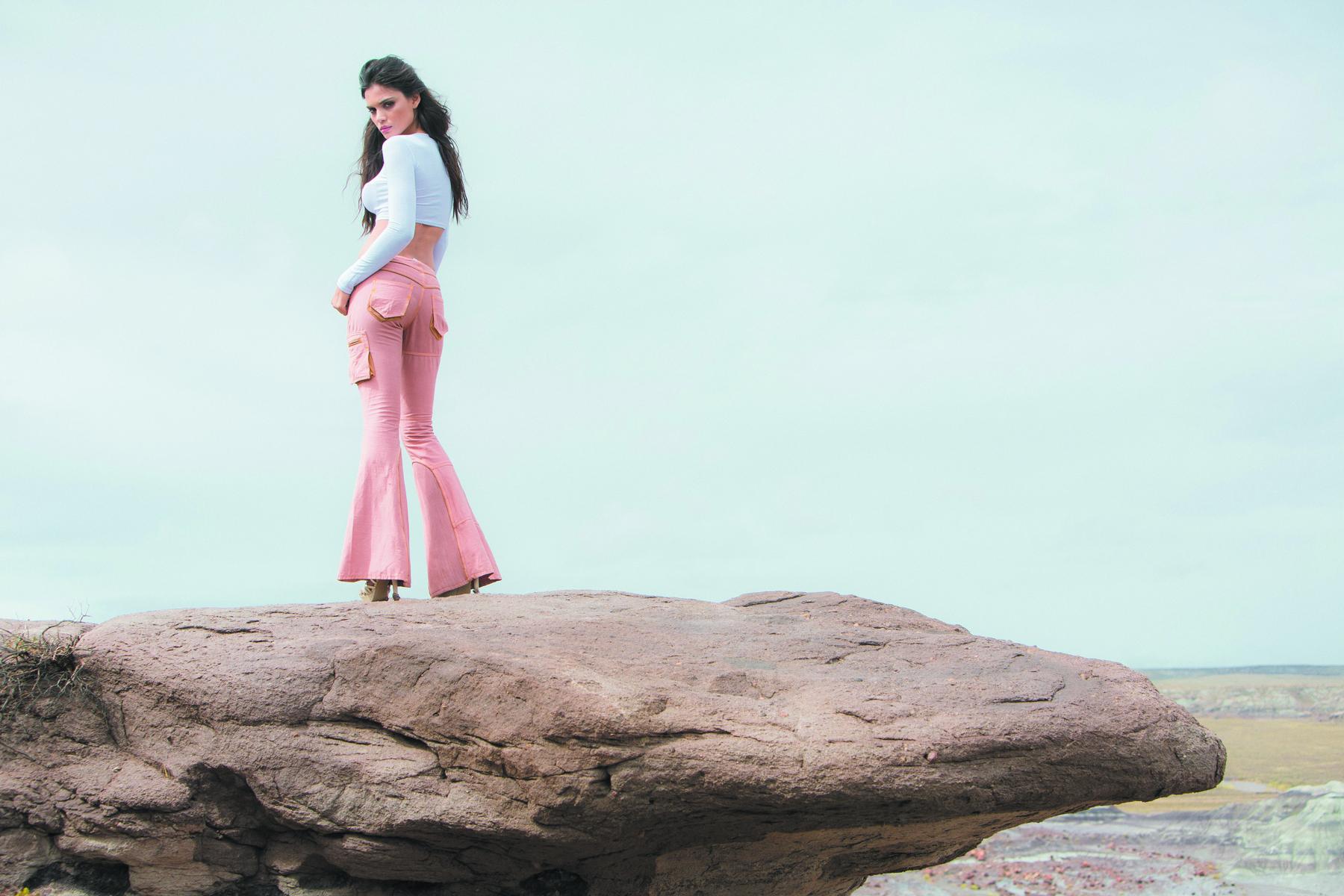 After nine months in L.A., the company made another big decision, one that would redirect its history.

Kay was living in Scottsdale and had a vision for a full production house and showroom in the city he called home, so the crew packed up a U-Haul and moved to a space in the Scottsdale Airpark.

Each Diego Milano creation is made only 150 times, according to Walsh. The jeans line is considered luxury denim, because of its high quality, unique design and limited-edition runs.

Each pair sells for $400 to $450. There are seven different women’s styles and five different men’s.

At Diego Milano, all the fabric marking, grading and cutting are done digitally and in-house. This saves a significant amount of money and keeps the quality control in the hands of the company. After the pieces of the patterns are cut, they are moved to assembly.

Walsh explains that when a design company hires a manufacturer for assembly, the designer doesn’t always get the last say in the process.

“Manufacturing happens so fast that some decisions have to be made in a split second,” Walsh says.

“They don’t have time to wait on you or to wait for you to come back on an email. Decisions are made in the moment. It may not be a decision you like, but you just kind of have to roll with it.”

Walsh says that this imperfect system was a big reason why Chris Kay wanted to bring Diego Milano manufacturing in-house—so that he and his design team could be more hands-on.

They pondered the idea of building a manufacturing plant in Arizona and weren’t sure of the risk, but they decided to make the move. “It hasn’t been an easy road, but it has been a wonderful one,” Walsh says.

Walsh feels that manufacturing is slowly coming back to America, but so far the movement is in small operations. As far as denim goes (the actual fabric, before it’s treated with various washes and cut into jeans), it is almost always made overseas. Diego Milano sources its raw denim and textiles from a manufacturer in Milan, Italy.

There is also evidence that the apparel manufacturing industry at large is growing across the Valley.

Other Arizona manufacturing companies include Star of India, Antigua, BodyAware, Inc. (men’s lingerie) and Lawless Denim. Phoenix Fashion Week has exploded in popularity, gaining national recognition, under the leadership of Brian Hill. And other niches are catching on in Arizona, as well. Arizona now has four fashion weeks, including a children’s apparel week and Tucson Fashion Week. 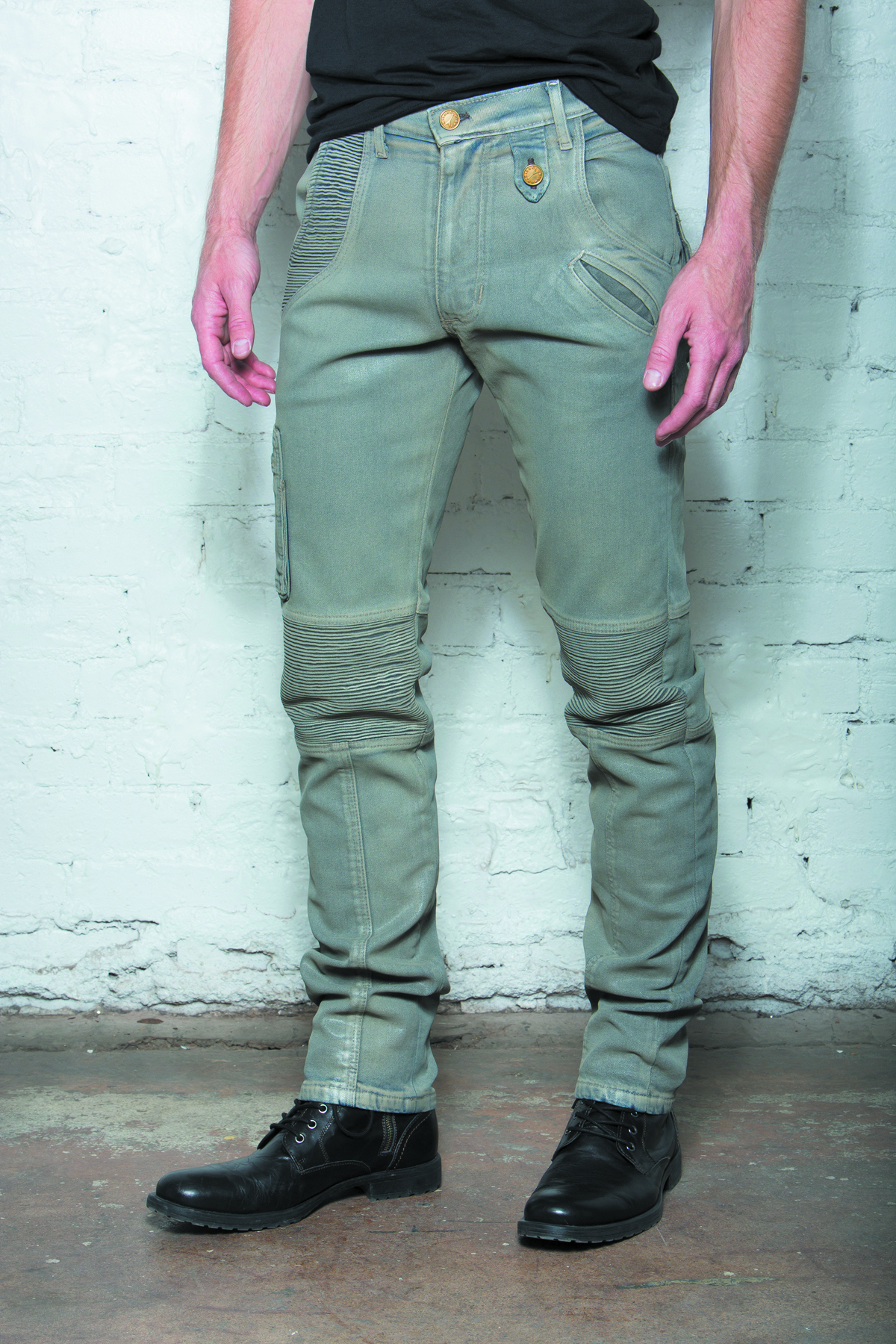 Price is linked to quantity, as Johnson explains. Finding ways for the community to share facilities, sewing skills and labor, and ordering power in a co-operative situation could be a win-win for everyone. Like hack spaces and incubators such as Seed Spot and CO+HOOTs for small businesses, Johnson dreams of opening a space where she would train designers in sewing and construction, working with patterns and making samples by hand.

Johnson already provides consultation services for designers who want to go into business. The first thing she helps designers figure out is cost. Johnson says, “I provide business consultations where I can explain this process, and I can explain tech packs” and other aspects of the business. She helps would-be designers figure out how much money they need to charge per item to actually make a profit, and also how much it will cost to go into production.

Walsh had a dream to rent out the manufacturing floor of Diego Milano to outside designers for their product construction. She named her idea Sew Haus, and even launched social media for the shared manufacturing space about a year ago. The demand was there, she says, but she realized that a lot of planning and logistics needed to be worked out before she could actually open the doors to other clothing makers.

Many of the machines would need to be recalibrated regularly, and the changes might lead to interruptions in production. Also, not all of Diego Milano’s machines are appropriate for all types of garment making. For example, the kinds of needles and machine settings used for denim would not be used for lingerie or knits. In many instances, a clothing maker might need an entirely different machine.

“The idea of a one-stop shop where everyone in Arizona can get things done—that’s going to take a little more time,” Walsh says.

Walsh still has hopes of one day expanding the facility at Diego Milano to rent out to other small-scale local designers for production, and owner Chris Kay supports this idea.

Meanwhile, Johnson has plans for a large-scale sewing and production training learn-space. She has amassed equipment and is currently seeking an affordable venue to rent. “It is going to be LabelHorde’s physical location and an incubator space to help scaffold the fashion industry and train professionals,” she says. “I’ve got the machinery, cutting tables, dress forms, pattern paper, a mini-library and tools needed. I just need to find the location.” Johnson has her eye on Scottsdale, and in addition to training students on how to construct clothing and do patternmaking, she also plans to host fashion parties and offer custom-made clothes and alterations. 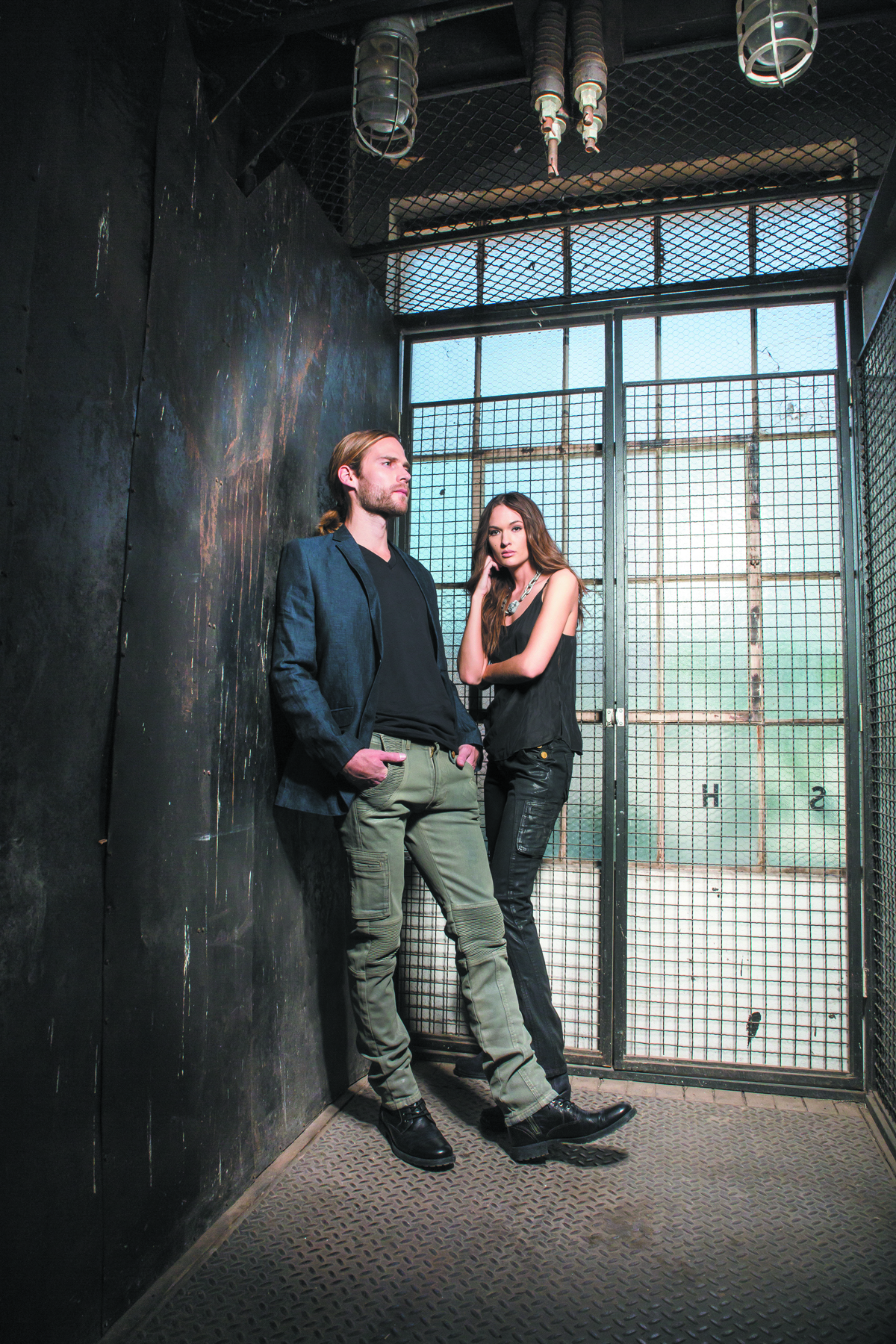 “I’ve got a business plan that I’ve started sharing with the City of Scottsdale as well as some investors and builders,” she says.

“I have a lot of supporters and volunteers waiting to help manage the space, and I know it will be a benefit to the fashion community, as well as to the economic development of the city.” -Angela Johnson

Walsh cites recent changes to federal regulations regarding the use of the “Made in the USA” tag that now require manufacturers not only to list where items were assembled but also to tell where the fabrics came from. This could mean some of those labels on your clothes will grow tediously longer. Walsh predicts that in the next decade, there may be a surge of homeland clothing makers. With any luck and a lot of hope, the seedling industry in Arizona will see its fair share of market growth.