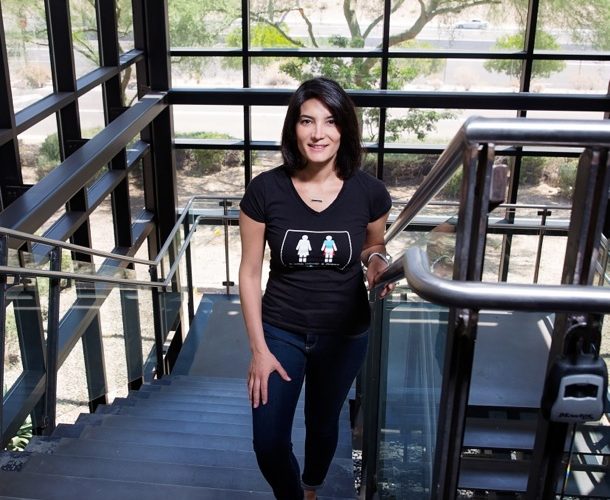 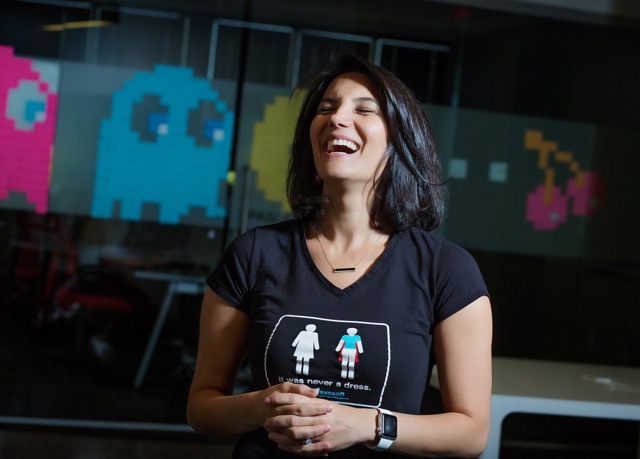 In an otherwise nondescript building in Scottsdale, right off the 101 freeway at Thunderbird, giant windows provide views of the surrounding mountains. This is where the Arizona-based software company Axosoft has its home, and CEO Lawdan Shojaee has her desk in a shared workspace. It is tempting to stop and gawk at the amazing views blending Phoenix’s natural attributes with its modern, expanding cityscape. But we don’t have time to stand still in this bustling work environment. And the view is only one of the many remarkable things that Shojaee and her squad of developers, code curators, Scrum masters and company evangelists get to share.

Acknowledged for its unique work environment, Axosoft was named one of the “Top Companies to Work for in Arizona” (by CareerBuilder and Republic Media in 2013). Without the vestiges of buttoned-down corporate workspaces, employees can graze freely, moving from a cluster of computer monitors to a meeting space, kitchen, gym, shower and, occasionally, a climbing wall.

Shojaee stands in the middle of what resembles an activities room at an exclusive middle school for gifted children. There are bookcases filled with good reads, cozy chairs, yoga mats and an impressive collection of Xbox accessories. Each room off to the east and west is a different department, for example IT or development, with sliding glass dividers.

“You are in smaller rooms with others based upon who you interact with and need the most,” Shojaee says, describing various tasks and projects. “We don’t have walls and we don’t have cubicles.” Developers sit or stand at computer workstations and freely commingle. Perimeter walls are covered with white boards, and employees can even write on the glass doors in order to work out a certain task or challenge.

In front of the shared space is a large, open kitchen with coffee makers, microwaves, a spice rack and the smells of delicious catered lunches. The kitchen also has three large vertical herb gardens, growing from a warmly lit hydroponic system (employees often go home with bags of fresh cuttings for the weekend).

There is also a shared necklace wall. “The sparkly one at the top goes to Vegas a lot,” Shojaee says. “Kids who come here love to wear these [bubbly] ones. We’ve had a lot of photo shoots with all of them.” Why have a necklace wall, one might ask? In case you want to “look a little fancy. It’s a very subtle way to show that women are wanted in this space, and that women are honored,” says Shojaee. It is meant to resonate a certain, perhaps nonliteral message. At Axosoft there are also unisex bathrooms with feminine products in baskets, set out in plain view. 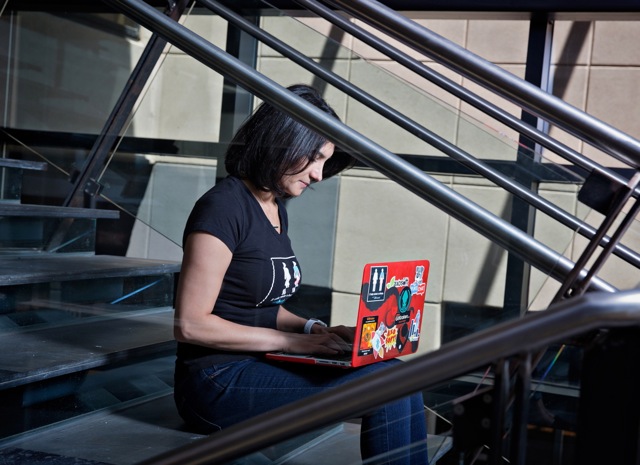 Why worry about women feeling comfortable in the workspace? When it comes to software development, the female population has been traditionally underrepresented. But Shojaee and her team of innovators and disruptors are taking on a gender gap that’s been in place not just decades but likely centuries, and has its roots not only at work but in education, religion and the home—deeply entrenched stereotypes with different ideas of worth and merit for men and women.

Let’s back up and explain how Shojaee got here in the first place. Axosoft was started in 2002 as an “agile project management software.” For those who don’t know what that is: “We are a very niche market. Specifically, developers use our tools to make software,” Shojaee says. She does not have a background in IT or software development but earned a PhD in physical therapy. She entered the tech industry the day she met her husband, Hamid Shojaee, founder of Axosoft. He turned the company over to her in 2014 and stepped away (but only a few steps, literally) to run his startup, Pure Chat.

There are many models for companies dealing with a conglomerate of techie-minds collaborating on projects. The challenge of getting everyone in one place and keeping them happy has been taken on by Apple, Google, Yahoo! and many other tech giants, with varying degrees of success. Axosoft is a smaller company—with 50 employees currently—but they have a unique approach to employee satisfaction, a system that Shojaee designed herself.

When asked directly: How do we get more women into tech? she answers that a big step is simply hiring more women. But the challenge of finding them is not so simple. “We have diversity programs. But what does that really mean? First you need diversity in the field for these programs to work,” Shojaee says. To solve the problem of lack of representation, she suggest that we move one step further back and get more girls interested in pursuing technology studies in school. She is working with community members, educators and scientists to address why girls drop out of tech- and science-focused curriculums much earlier than boys. “We work on hiring more, and we work on educating them younger,” she says. 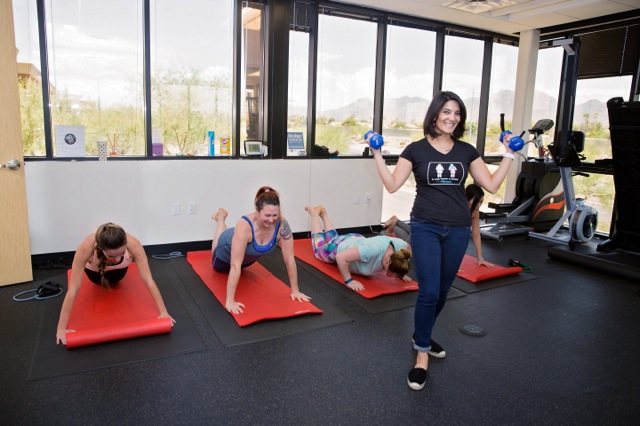 Last year, under the smart guidance of artist, provocateur and monologist Tania Katan, Axosoft’s current “evangelist” and “code curator,” the company launched the #ItWasNeverADress social media campaign to urge more women to enter the tech industry. The idea co-opted the international symbol for woman (the familiar icon used on public restrooms), and highlighted the dress portion, showing it instead as a superhero cape. Since then, the idea has taken on a life of its own, going viral and getting international recognition and support.

Shojaee is on the board of Girls in Tech (girlsintech.org), and Axosoft lent much support at the Girls in Tech Catalyst Conference held this past April at the Palomar Hotel in downtown Phoenix. (Axosoft has also participated in the Sally Conference for Women in Tech and conducted Women Who CODE and Girls Develop IT meet-ups.) Shojaee says that the speaking events and conferences are an important part of Axosoft’s outreach.
Axosoft has committed to a model where their developers work together, in person, much of the time. All of the developers are local, and they rarely work remotely. They do occasionally have “Remote Work Wednesdays,” Shojaee says, but they rotate through team members, so they don’t have many missing at the same time.

Applying Shojaee’s knowledge of physical therapy, with an attitude about embracing work as an integral part of life, Axosoft has intentionally built out the workspace so people will stay longer. Shojaee expects her employees to work mostly nine-hour days. That is why they have the gym, showers and other amenities, such as a large, comfortable lunchroom. “We have what I think is the best wellness program of any company,” she says. “Other companies give you a pedometer or they kick you $50 to join a gym, but who knows if anyone even does that.”

The idea of the nine hours is that nobody is keeping track of one another. “There are many business schools that say if you have friends at work, you are happier at work. So we create an environment conducive to that here. 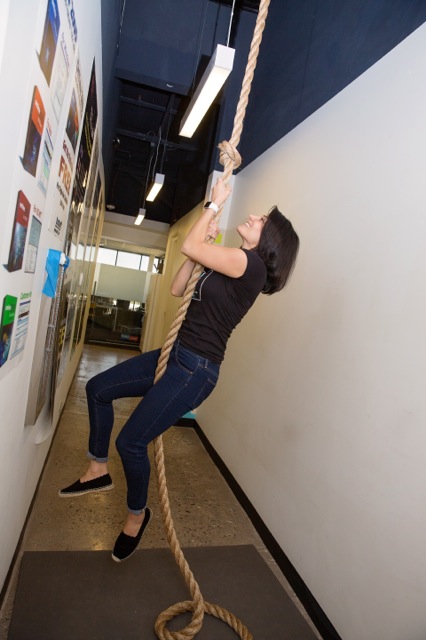 “Our interview process is about four to five hours long,” she says. They screen potential employees first by phone to see if the candidates will answer silly questions, indicating they have an easygoing personality and a sense of humor. If they pass the phone interview, they will meet with two associates. If those fellow employees give the thumbs-up, they will move to the next HR round. “I’ve hired people who were right skillset-wise but not the right company culture fit, and I’ve had to let them go,” Shojaee says.

Another benefit of working at Axosoft is that they provide a sort of in-house incubator period. In the summers, they give developers 30 days of paid time off to work on their own individual software projects. Axosoft even offers incentives to employees who choose to move closer to the office ($1,500 to $5,000). Some employees ride skateboards to work.

Last year, the staff banded together and completed the Spartan Race with a team of 25 employees and spouses. They trained for almost a year prior to competing. It was crazy, according to Shojaee, but really valuable as a team-building effort.

“Nothing takes forever here. We move so quickly that sometimes speed is the issue,” Shojaee says. “We’d rather put something out there and have it fail than be stuck on it forever.” The emphasis is still on producing quality products, but if something doesn’t work for clients, then they can always rescind. “The sooner you catch it, the better. Then you iterate and move forward,” she says.

Just as the Spartan Race runs on endurance and high energy, the leader of this successful Valley tech company is always on her toes—steering, motivating, inspiring and investing in the community. “Tech is getting somewhere now in Arizona,” Shojaee says.