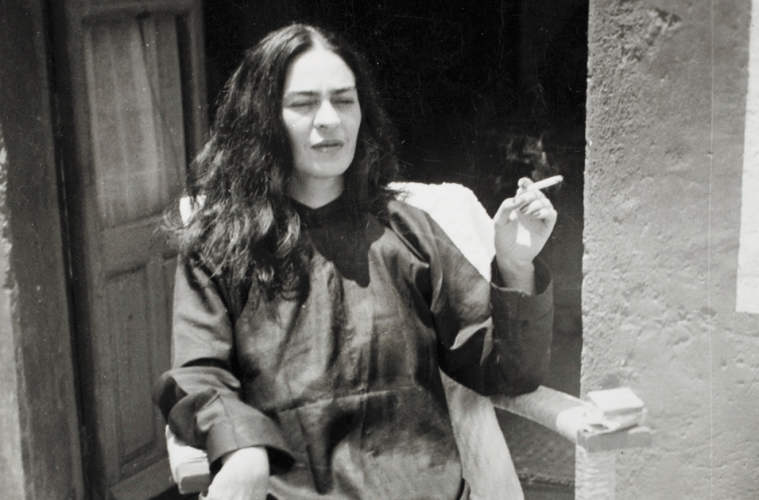 The secret to Frida Kahlo’s intrigue could take centuries to fully explain. Not afraid of recognition, the painter frequently made herself the subject of her own works, and she wasn’t shy before the camera. Her unorthodox marriage to fellow artist Diego Rivera has been the focus of several bios, including the well-read tome by biographer Hayden Herrera and the big-screen 2002 hit Frida, starring Salma Hayek.

Not long after the Hollywood buzz about Frida and her intense, boundary-crossing love affairs simmered, another of Frida’s secrets was unlocked—a virtual treasure chest of her most intimate belongings and prized possessions. 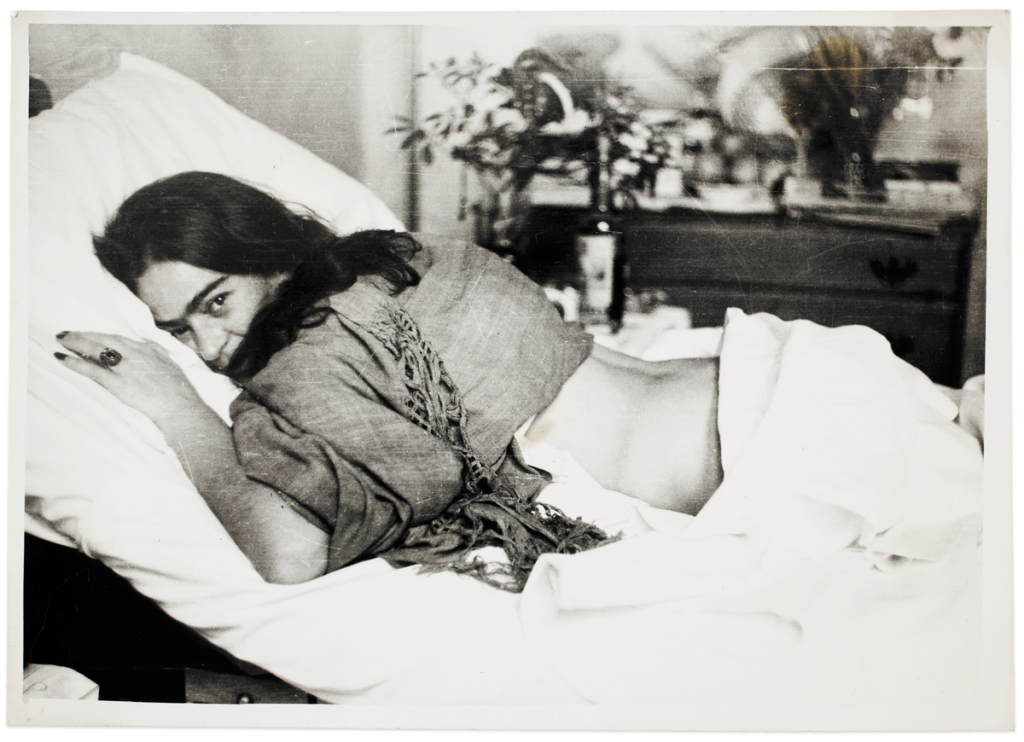 In 2004, after sitting dormant for almost half a century, a locked closet was finally opened at the Blue House Museum—Frida Kahlo’s family home. This closet had been ordered sealed around the time Diego Rivera died in 1957, Heard Museum Curator Janet Cantley says.

In Frida’s closet, museum workers found clothing and personal objects, letters and thousands of photographs, and even her prosthetic leg, Cantley says. Because she spent much of her life in convalescence, letter writing and taking photographs were very dear to her heart. For Frida these processes allowed her to stay connected to the outside world.

“Photography and letter-writing kept her in touch with people,” Cantley says.

Frida: Her Photos is on view in the Bernard Jacobson Gallery, a two-story space on the Western side of the Heard Museum. The exhibit is divided into six expressly themed sections, including Frida’s Origins; The Blue House (her childhood home, and the house where she died); Politics, Revolutions and Diego; Her Broken Body; Frida’s Loves; and Photography. More than 6,000 photographs were discovered in the Blue House closet, Cantley says. Among them were some historic daguerreotypes and other antiques. Of the items discovered, most were in very good condition; not many required restoration.

To add to the narrative, many of the photographs are marked by Frida’s special, personal touches, Cantley explains. For example, some of the photos have faces and bodies of people Frida may not have been getting along with cut out of the picture. One photo of Diego Rivera with his first wife was found folded in half so Frida wouldn’t have to look at this rival.

Another photo of Rivera is marked with Frida’s bright red lipstick kiss, “almost like a comment directly from Frida!” Cantley says.

Many of the notations from the backs of photos have been enlarged and adorn the gallery walls. 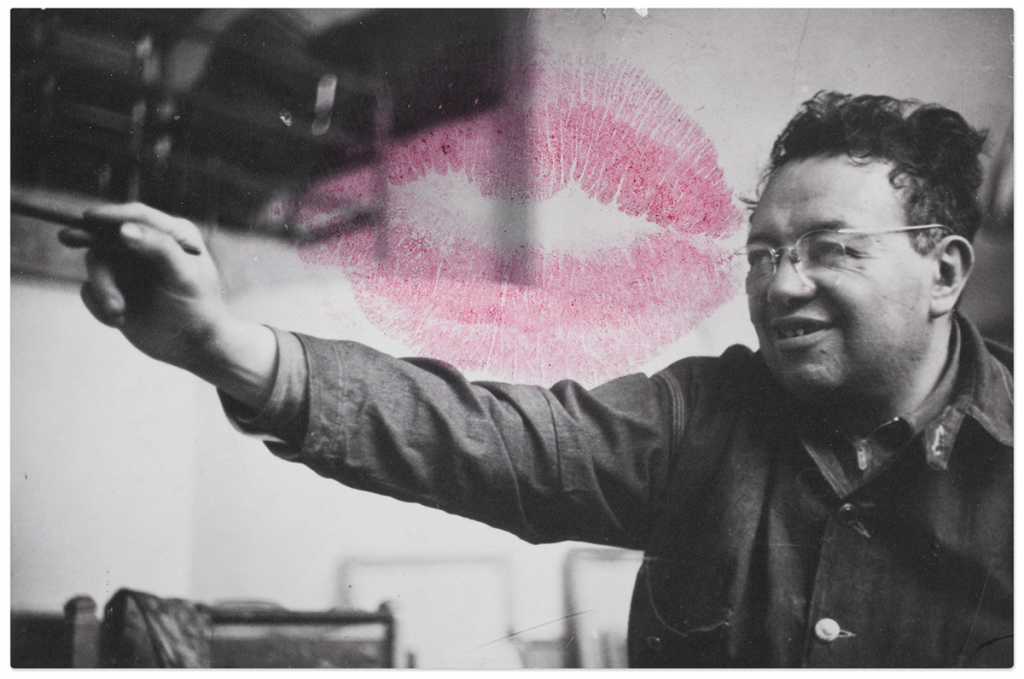 Within the photography section are not only photos shot by Frida and of Frida, but also images by Manuel Álvarez Bravo, Nickolas Muray, Gisèle Freund, Martin Munckácsi, Man Ray, Edward Weston and Guillermo Kahlo (Frida’s father). Many of these  well-known photographers were friends, associates and colleagues of Frida’s, Cantley says, so it’s fitting that their works should appear in this recently unearthed collection of her prized possessions. 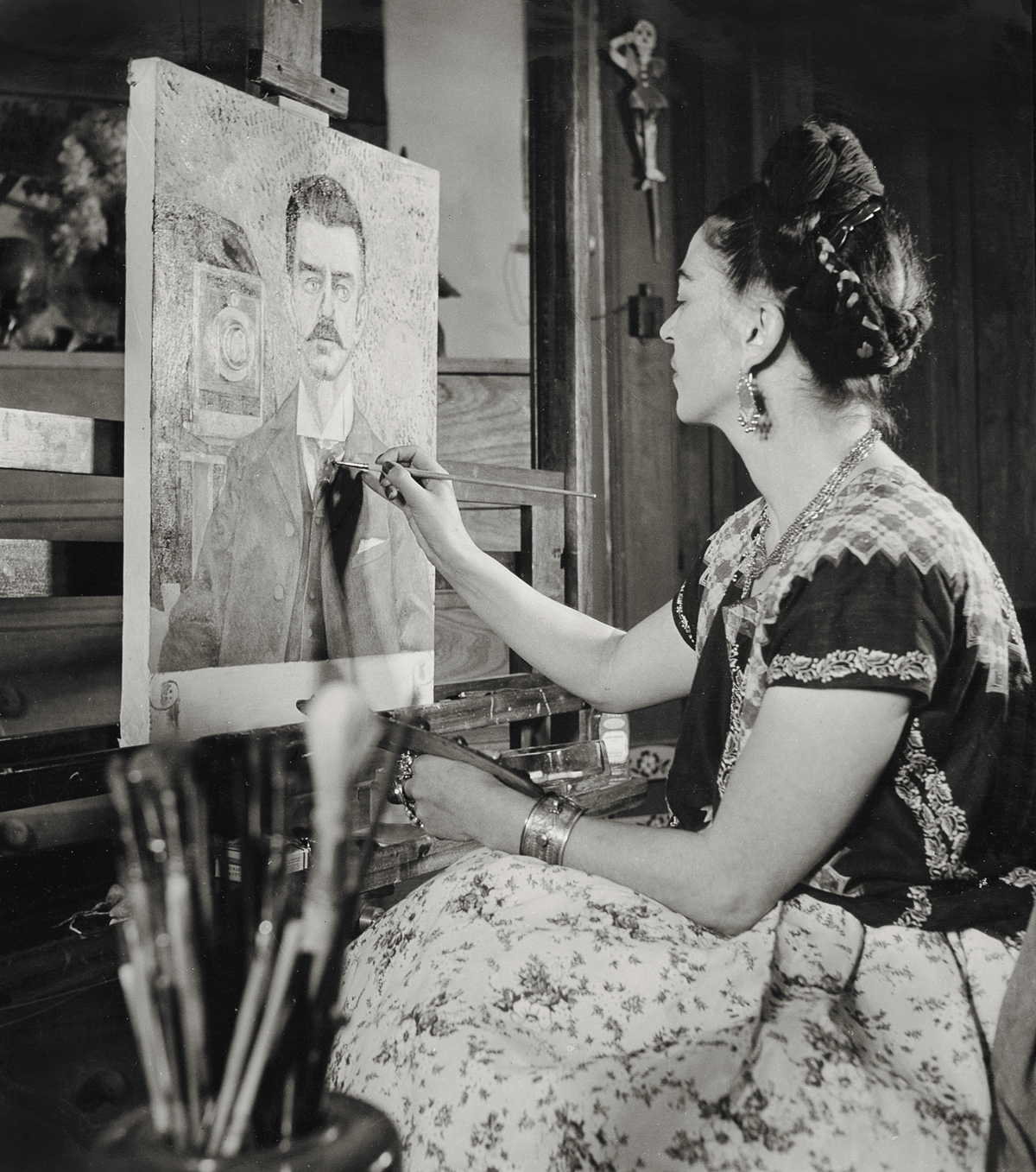 Frida painting the portrait of her father, by Gisèle Freund, 1951 ©Frida Kahlo Museum

Frida Kahlo grew up around her father’s photographic studio and reportedly even worked as his assistant from time to time, helping mix chemicals and process prints. There is no doubt her early artistic interests were fostered and supported in her family home. 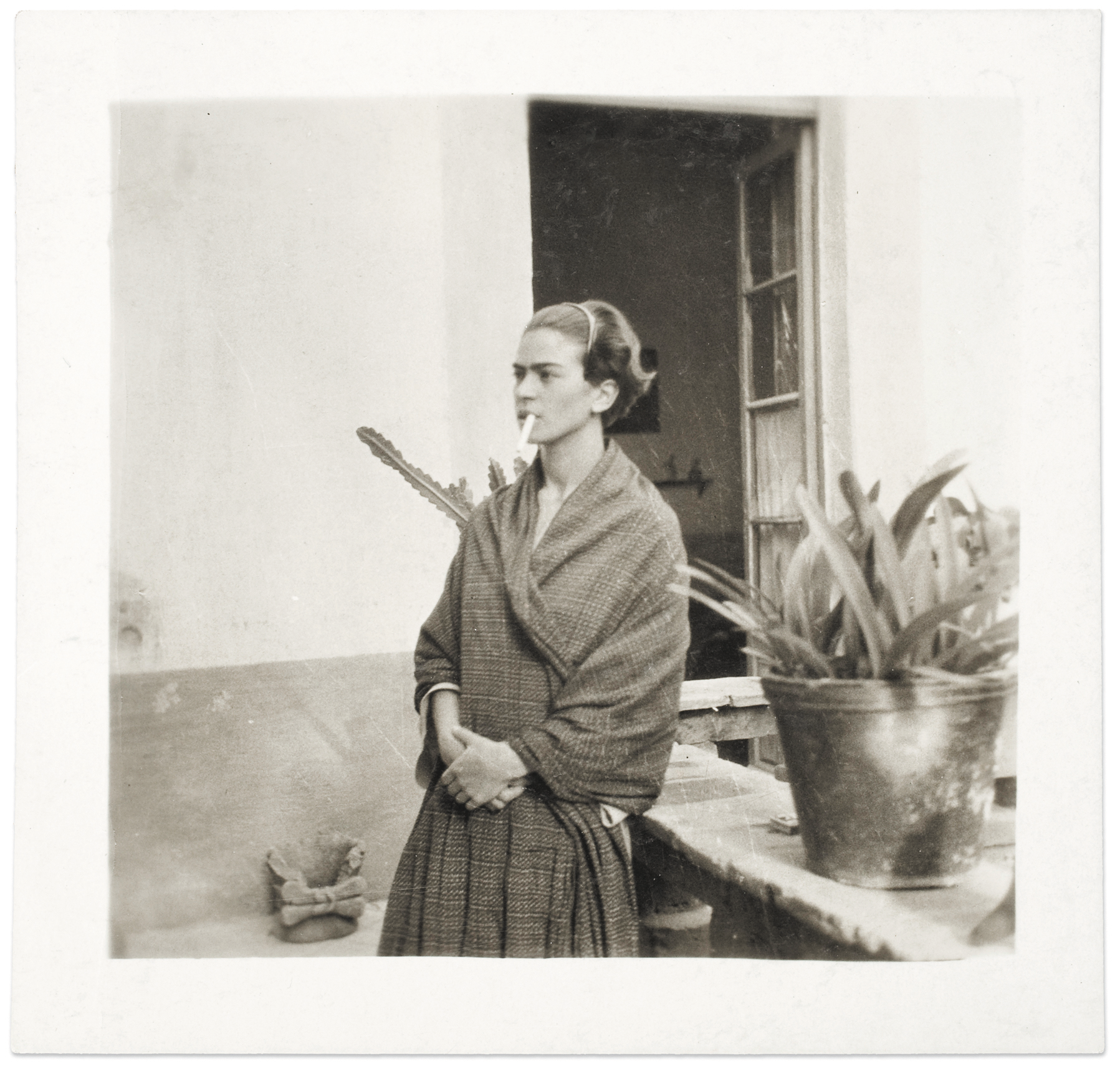 Among her photos are not only self-portraits from which she painted, but also photos of her beloved animals. Frida was known for keeping a menagerie in her house that included cats, monkeys and birds. Some of her beloved dogs were Xoloitzcuintli, a breed of Mexican hairless dog that looks similar to the Chihuahua, but with longer legs. At the exhibit’s opening, fans of Frida and this famous breed will be allowed to bring their dogs, and many are expected to show up in costume. 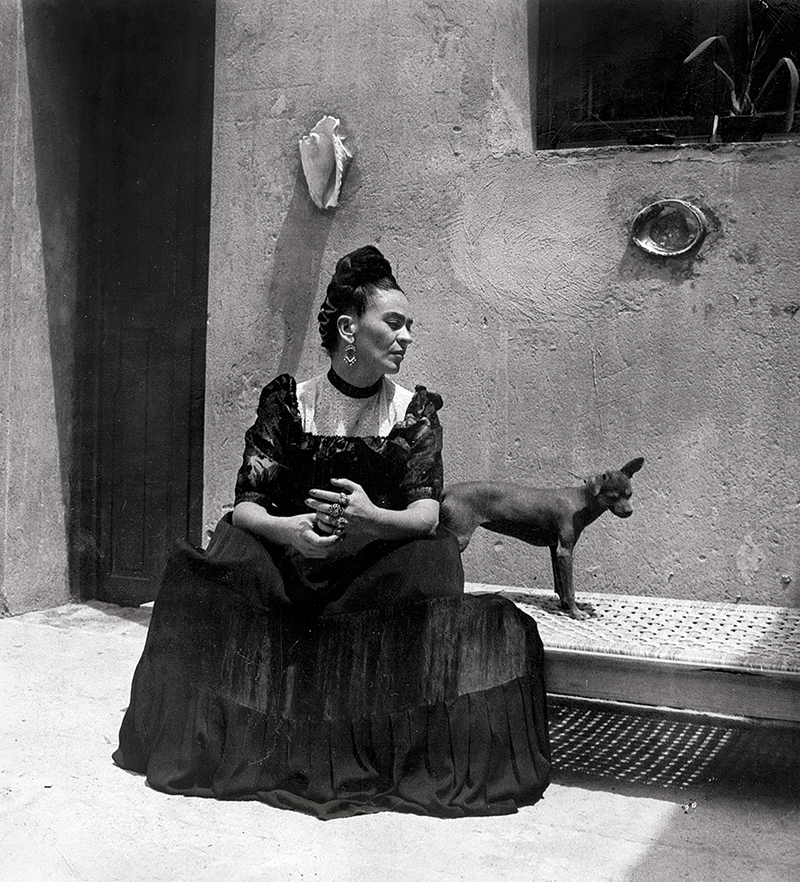 As an extension of the traveling show of photographs, the Heard Museum invited local artist collective the Phoenix Fridas to curate a related show honoring Frida Kahlo. For Los Favoritas de Frida, the Phoenix Fridas scoured the Heard’s permanent collection for items that connected to Frida Kahlo’s life and indigenous roots and assembled a collection including objects such as Oaxacan women’s garments, ceramics and textiles.

Displayed centrally are some Zapatec tapestries from Oaxaca, which museum staff say are very rare. The walls of the Lovena Ohl Gallery, located closer to the museum’s entrance, are painted in daring greens, blues, yellows and reds to match the vibrant colors of Frida’s artwork and the decorative arts of Oaxaca. The Los Favoritas exhibit includes hands-on activities for Frida fans of all ages, including a letter-writing station (Querida Frida) and a mock kitchenette called Cooking with Frida where younger visitors can pretend to fry felt tortillas and stir kettles over an imaginary cooking fire.

Opening weekend, human-sized puppets, or flacas (the artistry of Carmen and Zarco Guerrero) will dance around the courtyards of the museum. The flacas are built as giants, and a human player, or puppeteer, animates them from inside. One of these flacas, an enormous Frida puppet, on loan from the Guerreros, will greet patrons at the door near admissions.

First Friday (Nov. 6) should be a full house at the Heard when the museum hosts “Frida in Focus” from 6 to 10 p.m. Guests are invited to dress up as Frida and her friends (there will be a photo booth on site), and local dance artist and choreographer Liliana Gomez will present a special dance performance. Gomez invited six other dancers and cast them in solos and duets based on some of Frida Kahlo’s paintings, including The Two Fridas, Frida and Diego Rivera, and Self Portrait with Cropped Hair, as well as a photo of Frida by Nicholas Muray.

Gomez explains her personal connection to Frida Kahlo in her artist statement.

“The work I created is based on the research I did on each painting and also reflects what she means to me as a female artist. Each dance is emotional and heartfelt, and after viewing them all, I hope the museum patrons can gather the connection between them. Each piece created for the evening represents different versions of Frida; who she was as an individual, who she was in her marriage, her sexual fluidity, the woman Frida wanted to be, and who she became after her death,” Gomez writes. 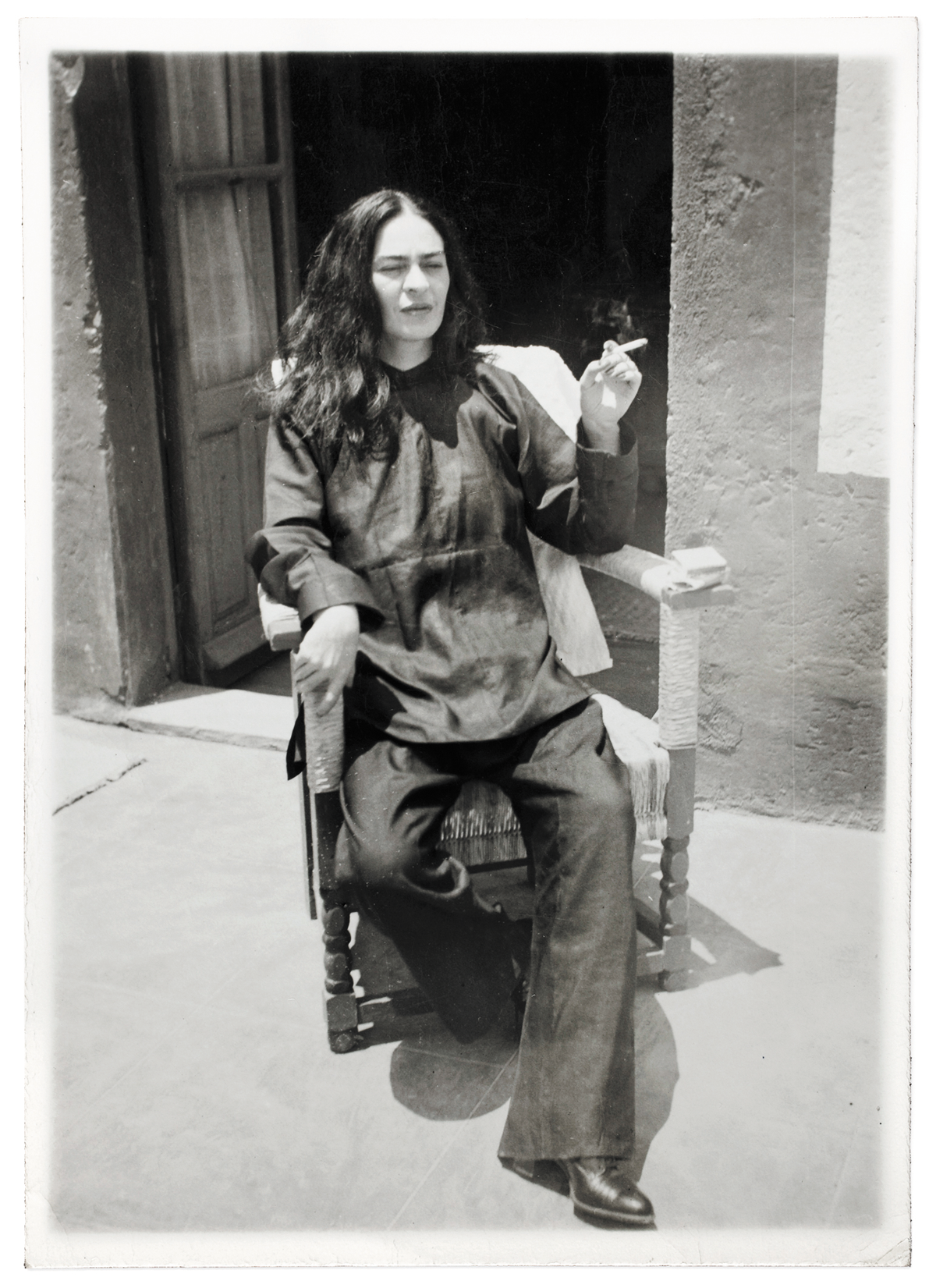 “My family spent Saturday afternoons sharing stories about art and history from my culture. We learned about Frida Kahlo and many other painters from Mexico,” Gomez says. “My parents collected Mexican-inspired art and home decor, and every weekend we searched for beautiful objects and bright colors to add to the warmth of our home. The home my parents created inspired creativity and imagination. In a way, it was a prelude to my life as an artist.”

The Heard will also host a Frida-inspired dining experience, “Fiesta con Frida,” Dec. 4, Cantley says. “Fiesta con Frida” will offer a buffet-style party spread including mole, poblano peppers, meatballs in chipotle sauce and corn pudding with chiles in cream. The dishes that will be served are based on Frida’s Fiestas: Recipes and Reminiscences of Life with Frida Kahlo, co-authored by Guadalupe Rivera, Frida’s step-daughter. Tickets are $35 for members and $45 for non-members, available online.

Frida Kahlo’s life was short; she died at age 47 in 1954 after undergoing more than 30 surgeries for complications after a devastating bus accident she suffered during her college years. But her intensity and eccentricity inspired generations, and through her many loves, she lives on. 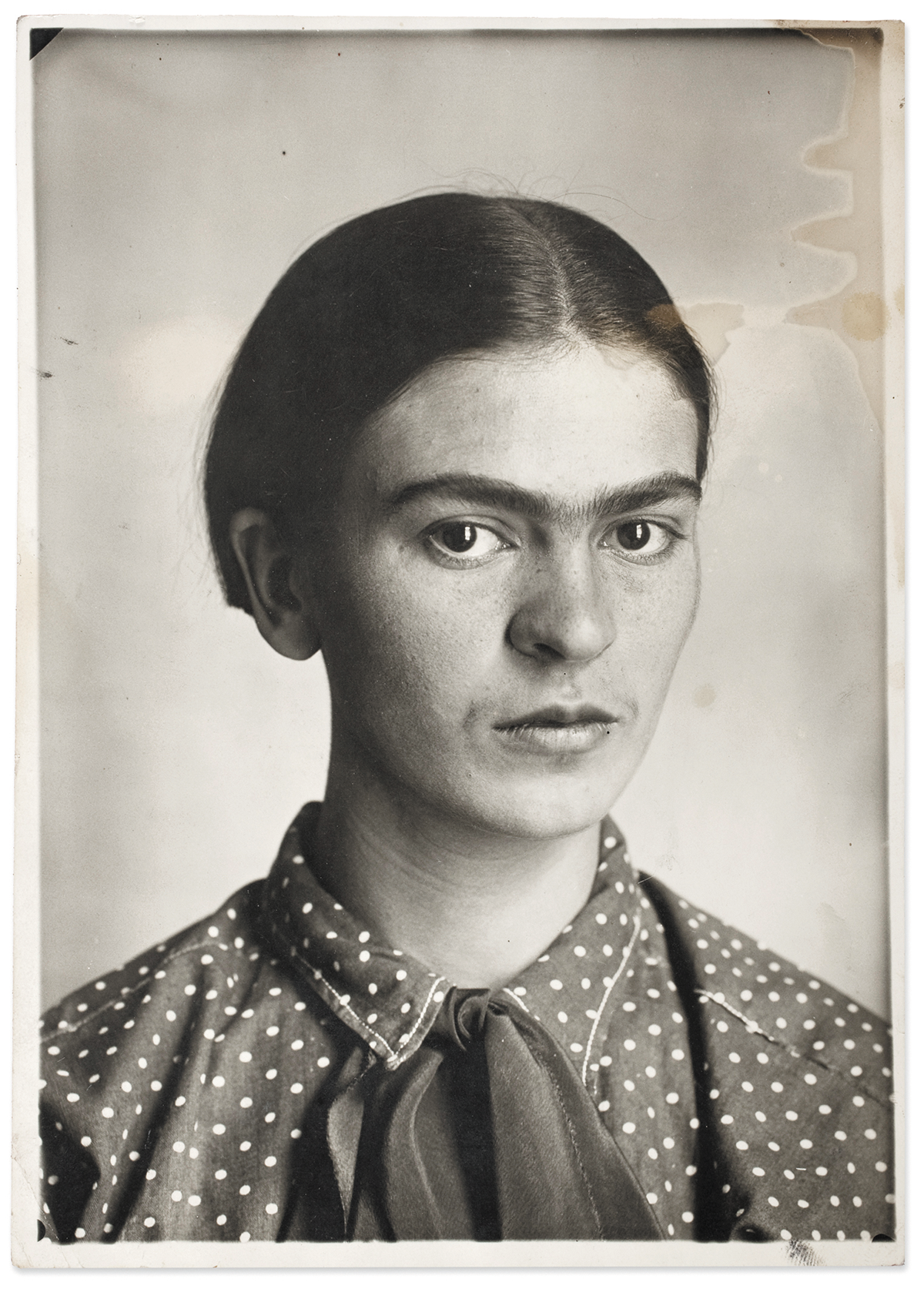