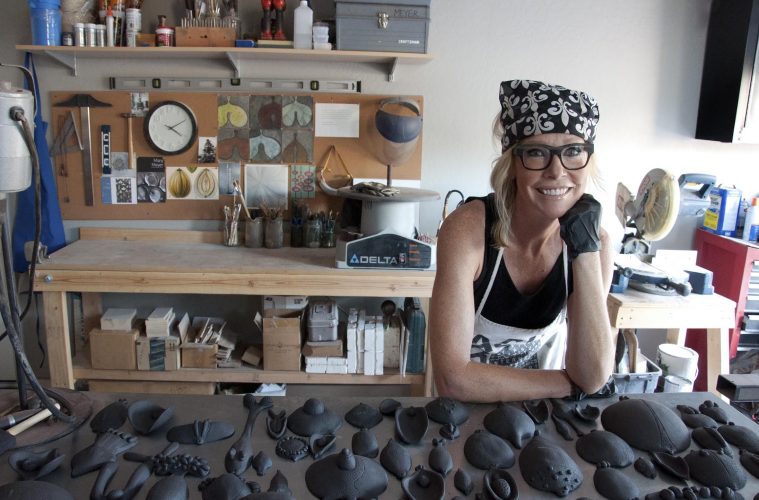 Mary Meyer an Art of Conscience and Consequence 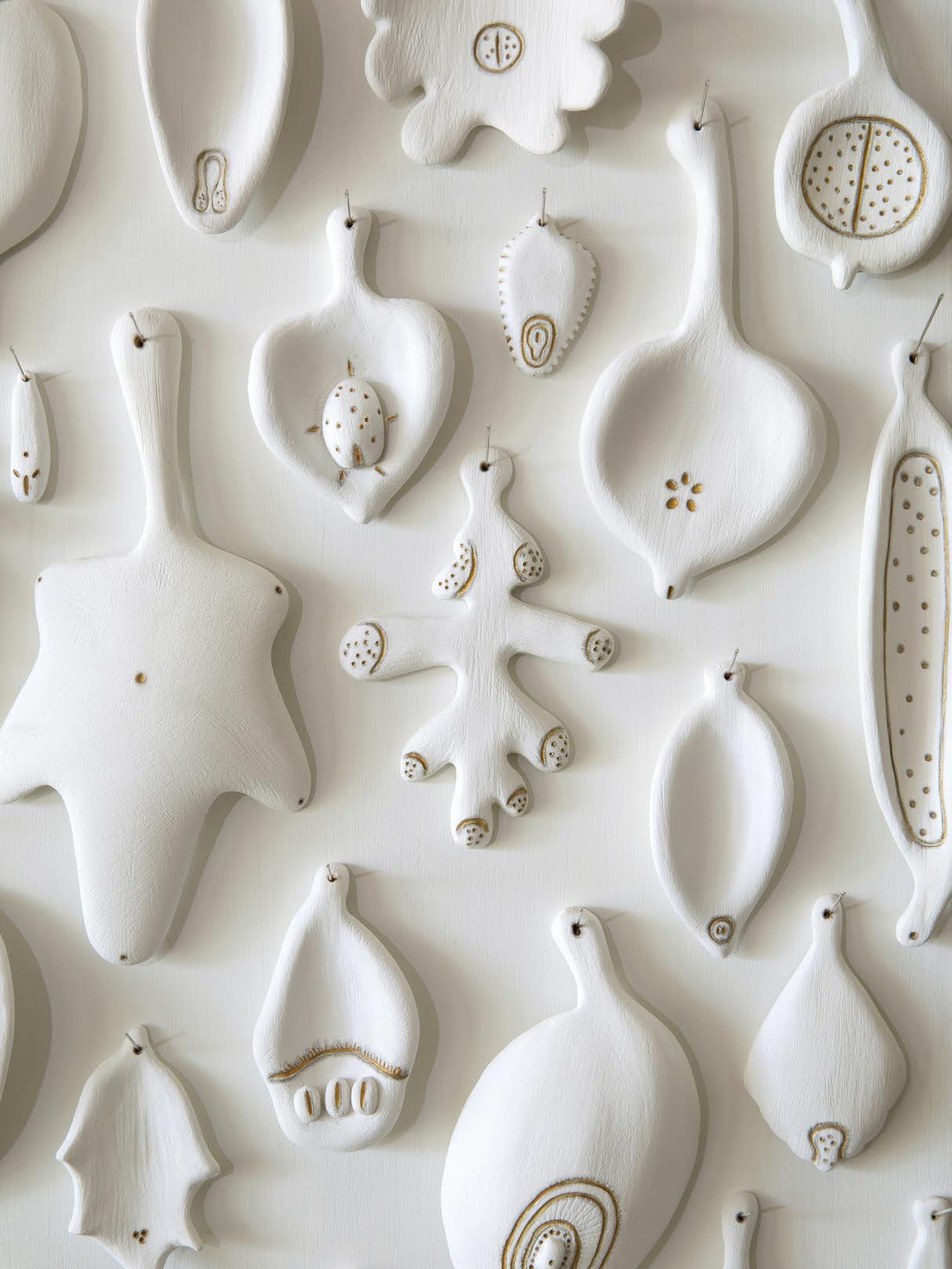 If you asked me to describe Biophilia, Mary Meyer’s solo show at Mesa Contemporary Arts (MCA) Museum, in just two words, I would have no trouble choosing them: absolutely uncompromising. The exhibit consists of two large pieces, each nearly cinematic in scale, where viewers are invited to be awed by the virtuosity of the hand-formed taxonomies of two collections: one of seeds, the other of leaves.

“Biophilia Seeds” is composed from a black matte clay that spans the entirety of the work, save for the small flecks of reddish-auburn that appear wherever the artist has incised specific shapes and patterns into the larger ceramic forms. By contrast, its sister piece, “Biophilia Leaves,” produces a dramatically different feeling, one that relies on the affective power of delicately hewn subtractions etched into the otherwise pristine surface of porcelain, distributed across a monolithic white substrate.

While this alone makes for nothing short of a striking aesthetic encounter, Meyer’s work is also deeply engaged in transforming symbolic references that we tend to take for granted. There are deep primordial associations regarding the use or absence of color, high value contrasts, and the tension created by compositional counterpoint, which play heavily in Meyer’s oeuvre. But if we take the time to analyze the pieces in Biophilia individually, we can better understand how Meyer’s use of black seems to undergo a hidden process of transmutation beyond its culturally codified meanings. 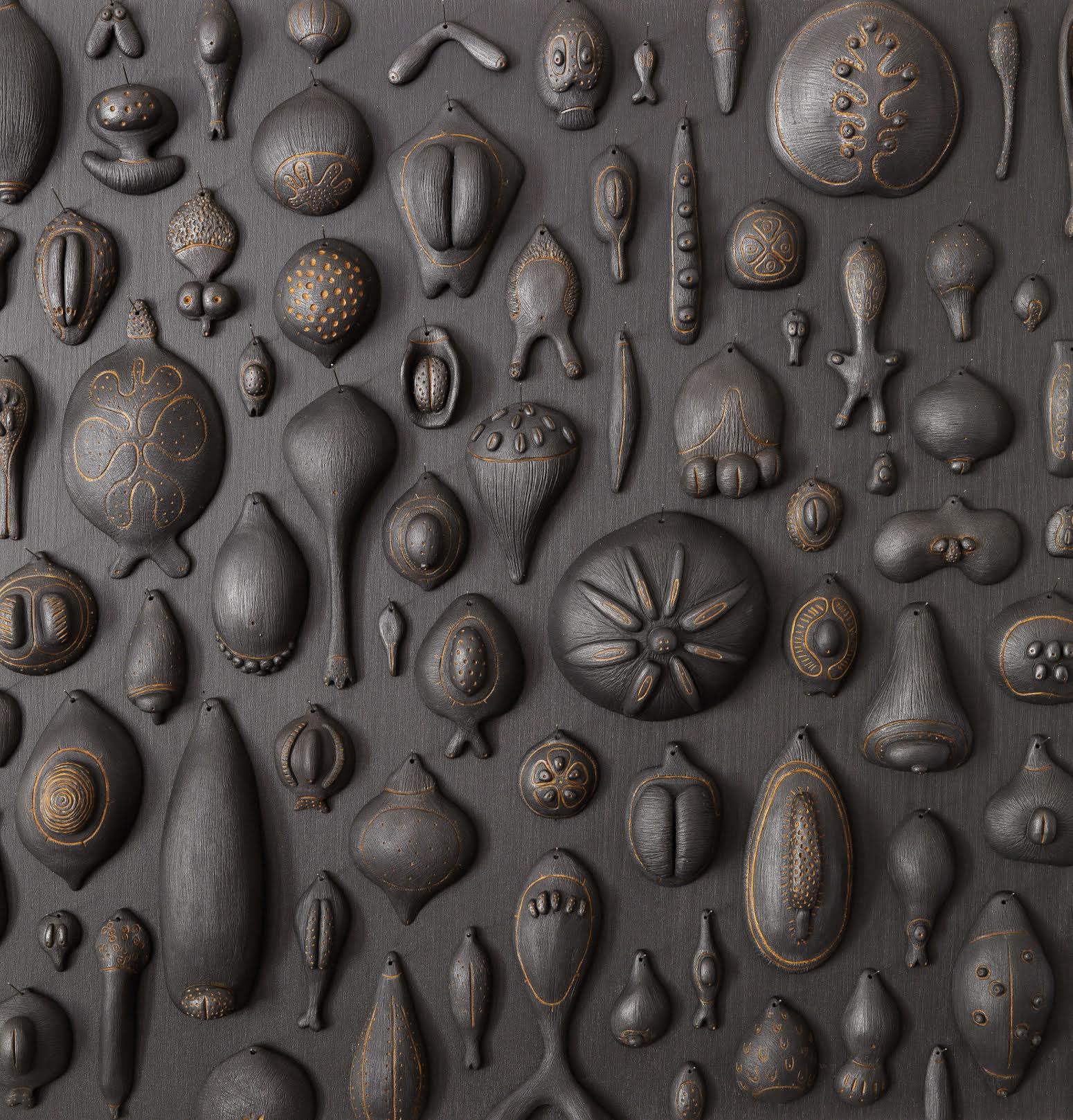 This happens because, in the West, black usually functions as a signifier of death, negativity, and mourning. But the hue strikes a wholly different chord in Meyer’s work when applied to the wealth of seeds that produce life. This counterintuitive move makes Meyer’s project feel closer to certain Eastern and esoteric philosophies, where blackness is seen as a kind of fullness, as a source that defines and shapes light, or as a container for the emanation of life before its appearance in this world. Thus, we can say that Meyer’s work actively bridges these two different cultural connotations by allowing form to emerge from the flatbed of the picture plane, in much the same way that plants emerge from a seedbed. Meyer ultimately gives us a model of artistic practice as a kind of creative mitosis. 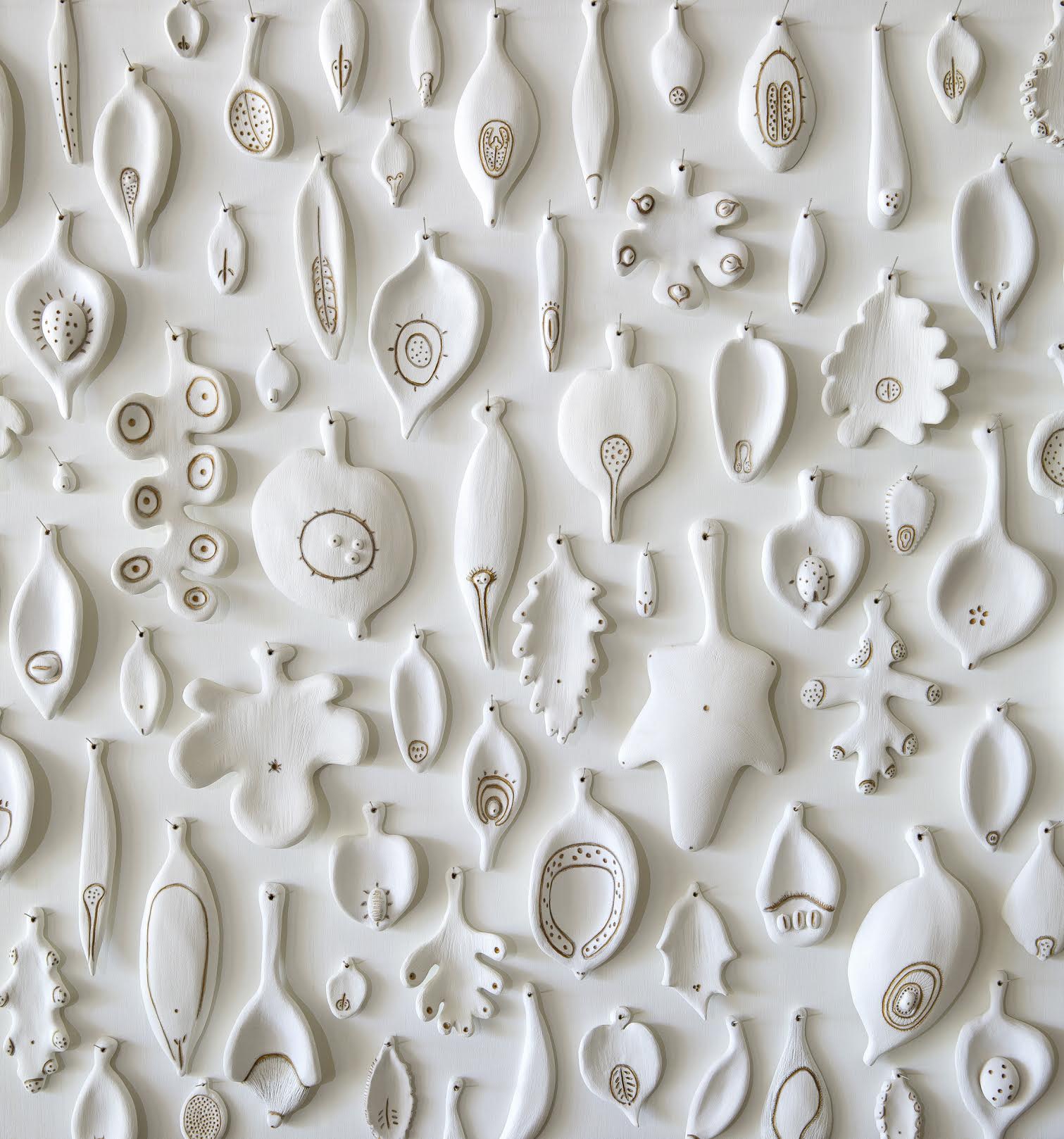 This method of making is also implied by the use of white in “Biophilia Leaves.” White is the color that contains all other colors, and it is used here to envelop the wild diffusion of plant forms that cover the earth as a life-sustaining force. And yet, this plurality of plant life, united as an image on a single substrate, floating in space like an encyclopedic picture book of enlarged specimens, also functions as a code of sorts allowing us to decipher a greater series of life processes on earth. This is true inasmuch as Biophilia, while itmakes a space for us to appreciate the highest degree of artistic craft through elegantly contoured forms, also allows a wider set of associations that come with forms of life presented as content and as means for contemplation.

Projects like Meyer’s seem to have a genuinely moral perspective, conjuring the idea of world where bio-diversity is dramatically reduced due to the effects of globalization and climate change. At the very moment of writing this, the Amazon is burning so intensely that the light of day has become indistinguishable from the dark of night throughout the region. Meyer utilizes such poignant contrasts throughout all of her projects in an effort to provide us with an artistic form of meditation on issues that are becoming more and more black and white, especially when considering the future on this planet. Biophilia is undoubtedly one such clarion call.