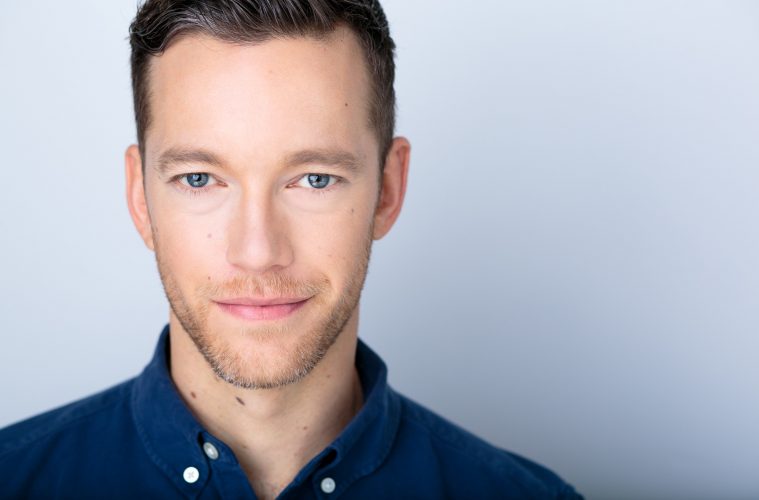 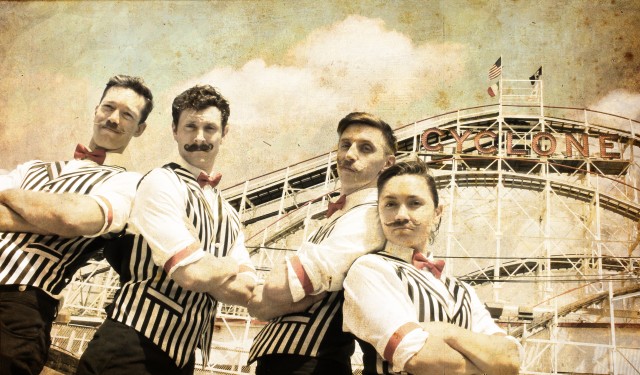 Although Jonothon Lyons was born in Scottsdale and lives in New York City, his true home is the stage. Whether as an actor, dancer, puppeteer, or playwright, Lyons has dedicated his life to theater. He has performed on and off Broadway with the Blue Man Group, “Sleep No More,” and in Basil Twist’s “Symphonie Fantastique,” to name a few.

His most recent original work – “The Apple Boys: A Barbershop Quartet Musical” – wrapped its premier off-Broadway run at the HERE Arts Center in New York City on December 23. Having received rave reviews from dozens of prominent publications – The New Yorkerdescribed Lyons’ writing as “wonderfully silly yet tightly constructed” – the offbeat musical seems set to run for seasons to come, with the possibility of a national tour in the not-too-distant future. 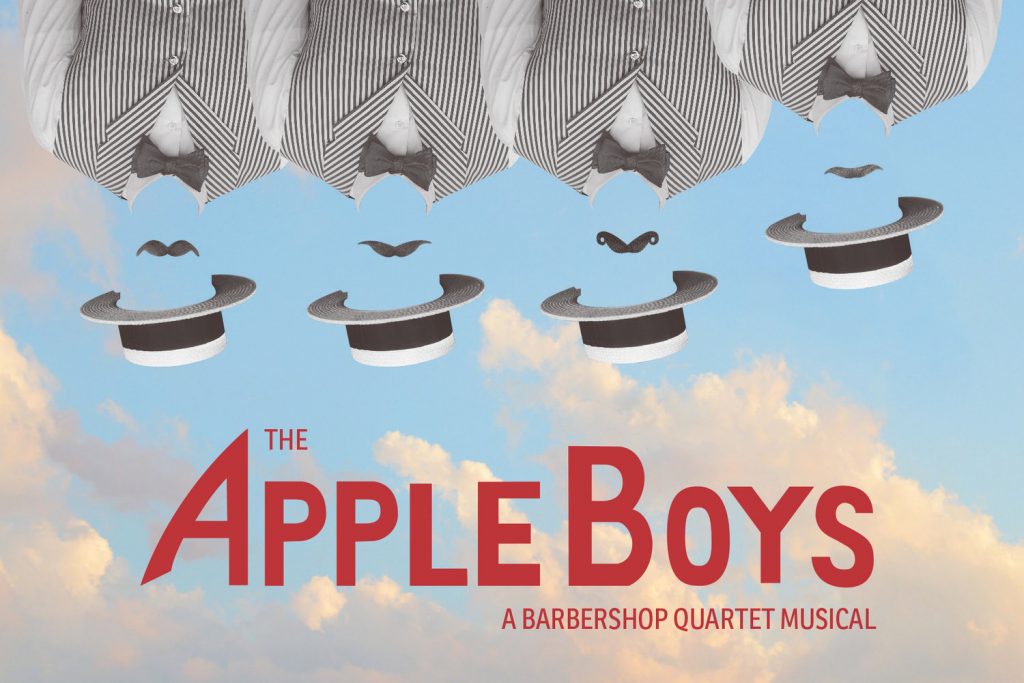 Lyons’ dream of conquering the theater world’s capital city didn’t begin on the streets of Manhattan. At just age seven, he wrote his first play – “The Fox, the Hunter, and the Rabbit” –which tied for first place in a competition with a play written by high school seniors. A 10-minute version of the play was staged, with Lyons’ father (Richard Howard, a mixed media artist who passed away last year) contributing an original song. A local TV news station seized on the play, which reporters interpreted as an allegory for the then-ongoing Gulf War.

“They thought the hunter represented George Bush and the fox represented Saddam Hussein,” Lyons recalls with a laugh. “I had no idea what they were talking about. I was seven years old. To me, it was just a fable.”

Lyons father returned to ASU to study theater around that same time, exposing his son to more plays. At nine, Lyons stepped in front of the curtain, performing as Man Number Two in a production of “Rumpelstiltskin” staged byGreasepaint Youtheatre in Scottsdale. Lyons didn’t let the part’s supporting status deter him in the slightest. “When I auditioned for that play, something really clicked,” he said. “I knew that’s what I wanted to spend my time doing.”

Lyons continued to audition for and land parts in community and school productions. The next big step forward was enrolling in the Arizona School for the Arts for high school, a charter school with an emphasis on performing arts located in downtown Phoenix. Lyons recalls thepassion and professionalism of his theater teacher, Ron Bonanni.

“He set a new bar and demanded that acting and theater be taken as seriously as the ballet program, which, at the time, had students dancing with Ballet Arizona,” Lyons said. “He was also a multidisciplinary artist. He was our director, but he was also the scenic designer, lighting designer, and construction craftsman. The sets in our school productions were unbelievable. That really raised the bar and taught me about the collaborative aspect of theater.” 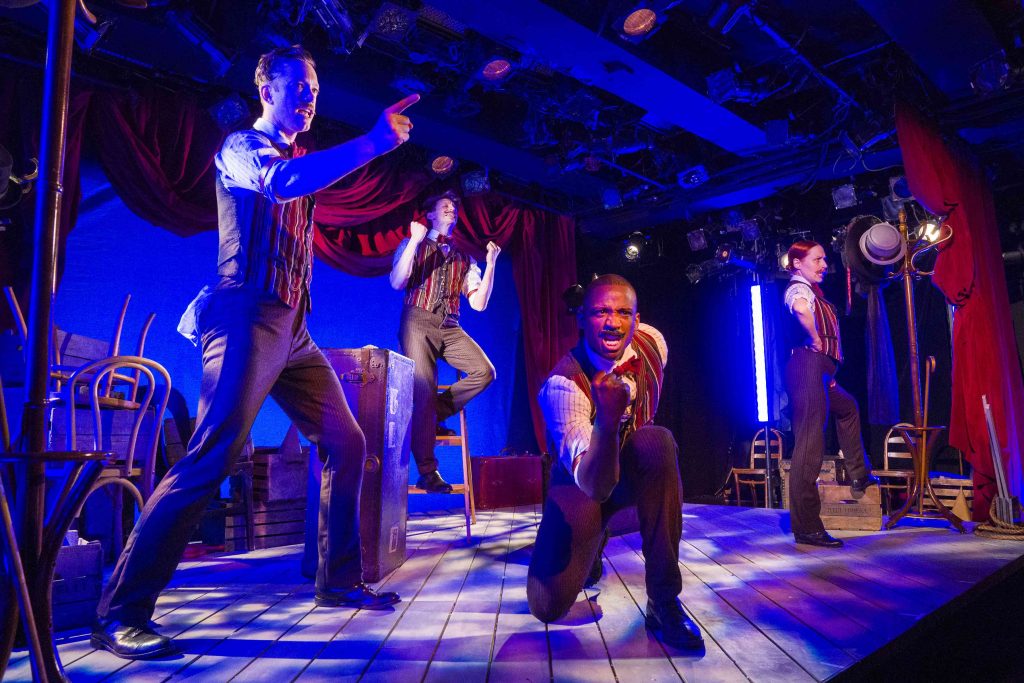 The first play he performed in with the school – “The Fantasticks” – still holds a special place for him and was a deep influence on “The Apple Boys.” When the Arizona Republicdid a series profiling promising graduates from the class of 2000, the school put him forward. ASU faculty saw the article and suggested Lyons apply for an Arizona Community Foundation scholarship, which he received.

Though adjusting to the larger class sizes at ASU took some time, Lyons connected with his professors and performed in numerous plays and improv nights. One of his professors, Marshall Mason, received a Tony Award for Lifetime Achievement in the Theater in 2016 for work on numerous Broadway productions. One aspect of Mason’s class that strongly impacted Lyons was the weekly quizzes about the New York Times’ Sunday Arts & Leisure section. “It really gave us a New York–centric view of what it takes to succeed in theater,” Lyons said.

Gitta Honegger and Lance Gharavi were two of Lyons’ ASU professors who encouraged him to think about producing his own original work. “Gharavihad a thing he called the ‘edifice complex,’ where he sees breaking into theater or the entertainment industry as a process where you have to get inside an existing building, as opposed to building your own thing,” Lyons said. “I took that to heart, and now I’m finally at a place where I have built something myself and it is breaking down walls.”

A performance highlight from this period was landing the leading role of Alex in a Stray Cat Theater production of “A Clockwork Orange,” based on the novel by Anthony Burgess.“That was just a dream come true, being 21 or 22, playing Alex,” Lyons said.Robert Pela praised Lyons’ performance in a review for the Phoenix New Timesin 2004, as “a swaggering recital that’s equal parts Iggy Pop and Joan Crawford.” 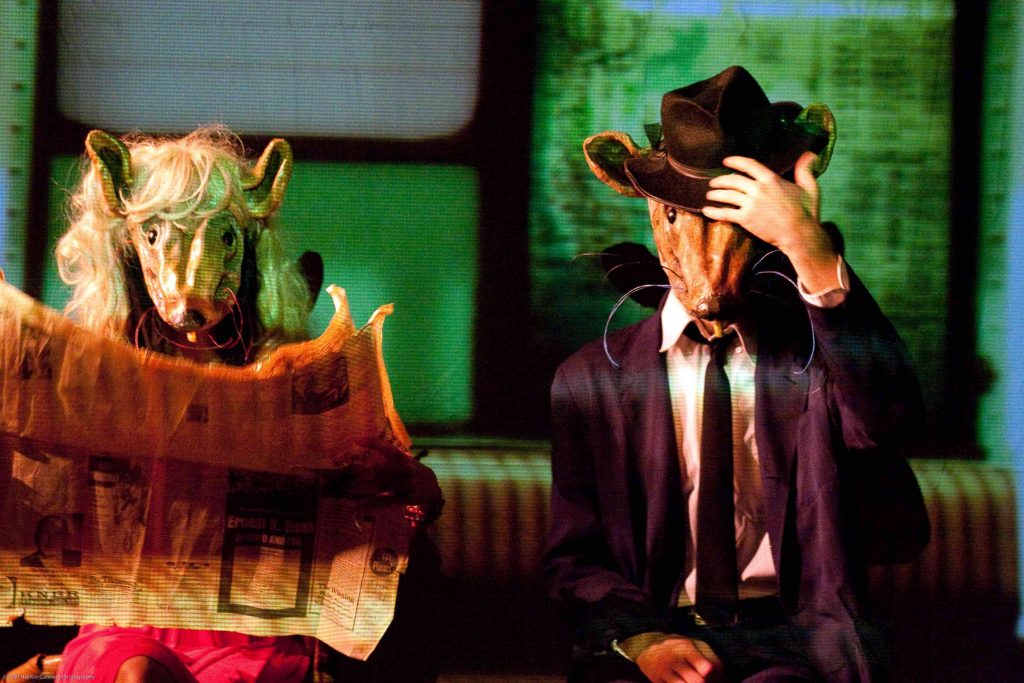 After graduating from ASU, Lyons relocated to New York City intent on pursuing his dream. He soon landed a job working for a mask puppetry theater. Inspired by the elaborate papier-mâchémasks he encountered there, he created his first large rat mask. A theater in Brooklyn hosted a night of 10-minute dance and movement-based plays, and Lyons create a piece for it. “The rough idea was that an old man in a New York apartment dies, and a giant rat eats his brain and becomes a human,” Lyons explained. “Then he notices the audience and realizes he’s a naked rat and puts his clothes on.”

After the performance, Lyons continued developing the story, using his anguish over a recent heartbreak as creative fuel. He gave his Kafkaesque anthropomorphized vermin a darkly ironic profession and tragic arc worthy of a German Romantic opera. He submitted it for a program at the HERE Arts Center,which provides subsidized space for new works. Lyons staged roughly a dozen performances of “The Tenement” at the Dorothy B. Williams Theatre in 2009.

The judges for the New York Innovative Theater Awards were in the audience and liked what they saw. “The Tenement” received nominations in many categories, and Lyons won for Outstanding Original Short Script. In 2013, ASU commissioned a new and expanded version of the show, which Lyons wrote in collaboration with another playwright, Matthew Keuter, who helped with dialogue. 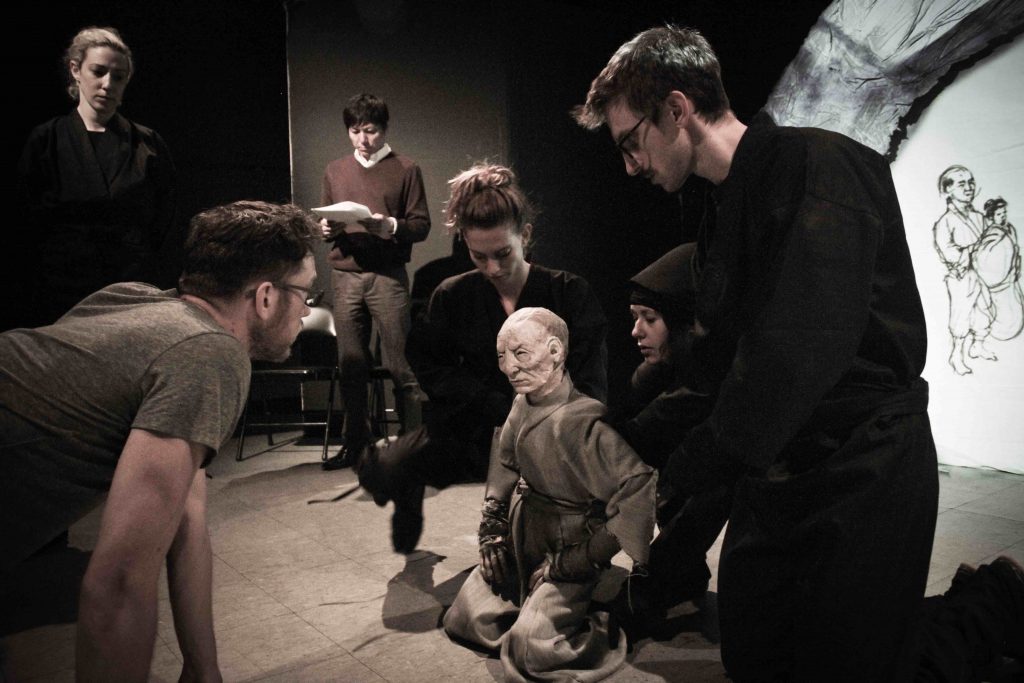 Around this same time, Lyons began working with renowned puppeteer Basil Twist – recipient of a MacArthur “Genius” Grant in 2015 – on the Broadway staging of “The Addams Family Musical.” Lyons continued to work with him over the next few years on productions such as “Petrushka,” “The Rite of Spring,” and “Symphonie Fantastique.”Twist became a mentor and role model for Lyons, who was inspired by how Twist developed unique works on his own terms that were both critically and commercially successful. “I’ve absorbed so much from him that’s led to my ability to write, produce, and perform in my own work,” Lyons said.

In 2011, Lyons joined the Blue Man Group, a unique performance art company famous for their stage, film, TV, and even audio work. Being a member of such a well-known production group changed his status within the industry. It was also a reminder that truly unique acts could succeed.

Lyons’ next original project, titled “Ensō,” made use of Bunraku puppetry, a traditional form of Japanese puppet theater where a single puppet is operated by three individuals. Lyons was inspired by Philippe Genty’s famous work “Pierrot,” in which a marionette puppet slowly becomes cognizant of its strings and the one who pulls them. “Ensō” was to culminate in a scene where three Bunraku puppets, operated by a total of nine puppeteers, would pick up and operate a fourth one. Though he received a grant from the Jim Henson Foundation, the project didn’t advance far past the developmental stage. 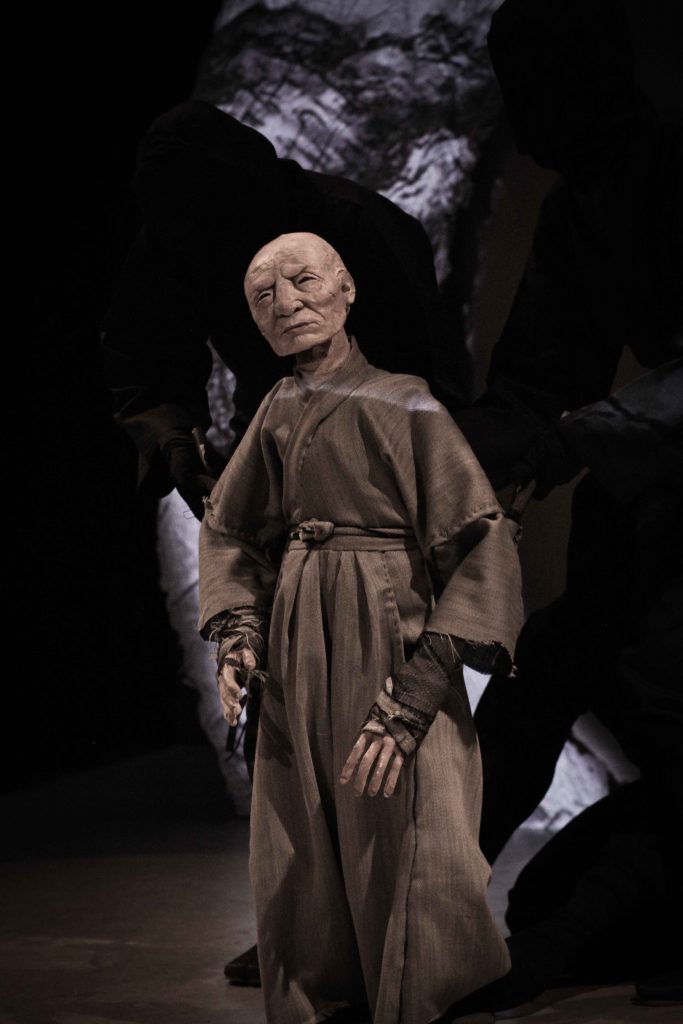 In 2012, Lyons joined the cast of “Sleep No More,” an award-winning New York City production by Punchdrunk, a London theater company. An example of promenade or interactive theater, the show’s stage sprawls over several floors of the McKittrick Hotel, a renovated warehouse in the Chelsea neighborhood of Manhattan. The audience wears masks as they follow performers through psychedelic sets in a show inspired by Shakespeare’s “Macbeth,” Alfred Hitchcock movies, and the 1697 Paisley witch trials.

Also in 2012, Lyons began forming a barbershop quartet with another Valley transplant, Cameron Malstead. Their first performance was in a show held in the Manderley Bar, a venue within the McKittrick Hotel with a 1920/30s theme. Having recruited Zach McNally, another actor, to be the third member, they still needed a tenor. In the dressing room while preparing, they askedLily Ockwell, another “Sleep No More” performer, if she would don a mustache and striped vest. She accepted, and the Apple Boys’ first incarnation was born.

A few years later, at a cast party, Lyons discussed his vision of a musical built around the Apple Boys with actor and writer Mat Fraser (who has thalidomide-induced phocomelia and appeared in the third season of “American Horror Story”). Fraser told Lyons to stop worrying and just write a draft. This encounter proved the final impetus.

Lyons approached composer and lyricist Ben Bonnemafrom “Sleep No More,”who agreed to write the music and songs. Lyons then wrote the rest of the script (called the “book” in musical parlance). Tired of schlepping puppets, masks, projectors, and other props, Lyons wanted this project to be performance driven and require minimal set-up. “I decided I’d do it as long as everything fit into one suitcase,” Lyons said.

The story is set on Coney Island in the first half of the 20th century. The four protagonists are drawn from American and New York lore, with Lyons himself portraying Warren Lincoln Travis, the world’s strongest man. Throughout the play, the four actors portray more than forty characters. Even before it was finished, the pair started submitting it to various development projects. “It got rejected from basically everything,” Lyons said.

Finally, they secured a venue for August of 2016 and staged what would become the first act of “The Apple Boys.” The next spring, they held a number of table reads. With their tenor Ockwellunavailable, Emily Skeggs, a Tony-nominated stage and film actress, was recruited to fill in. She drew further attention to the project. 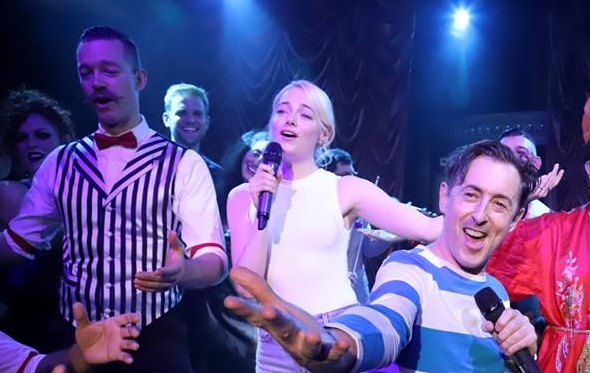 Then one April afternoon, while working on “Symphonie Fantastique,” Twist turned to Lyons and asked what he wanted to do with “The Apple Boys.” “I said, ‘Honestly, I’d love to have a production in the Dorothy B. Williams Theatre in December,’” Lyons recalls. Twist informed him of an available slot due to another show’s cancellation.

“Our hope is that next year we can be produced by an established off-Broadway company or maybe an out-of-town production,” Lyons said of the show’s future. “With the right reviews and the right advertising, we could really run for a while.”

However far his dreams and craft may take him – whether performing in shows such as Anthony Minghella’s “Madama Butterfly” or harmonizing his own creations – the commitment and focus Lyons honed in school and community theater productions in the Valley will ensure he’ll never forget where he’s going – or where he came from.