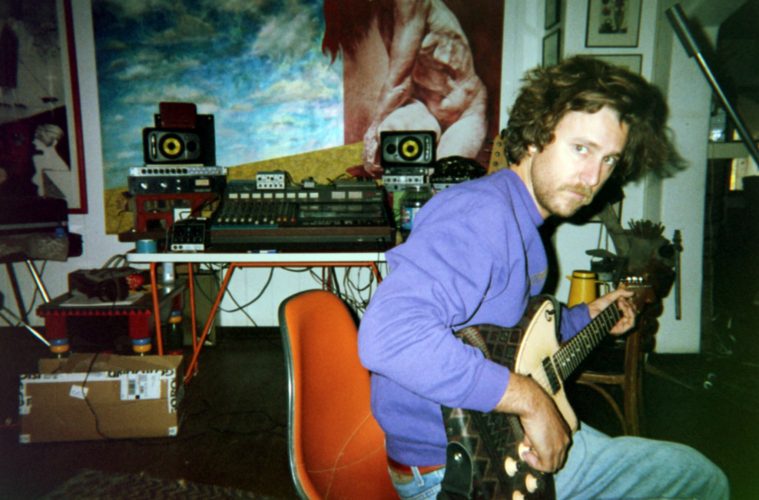 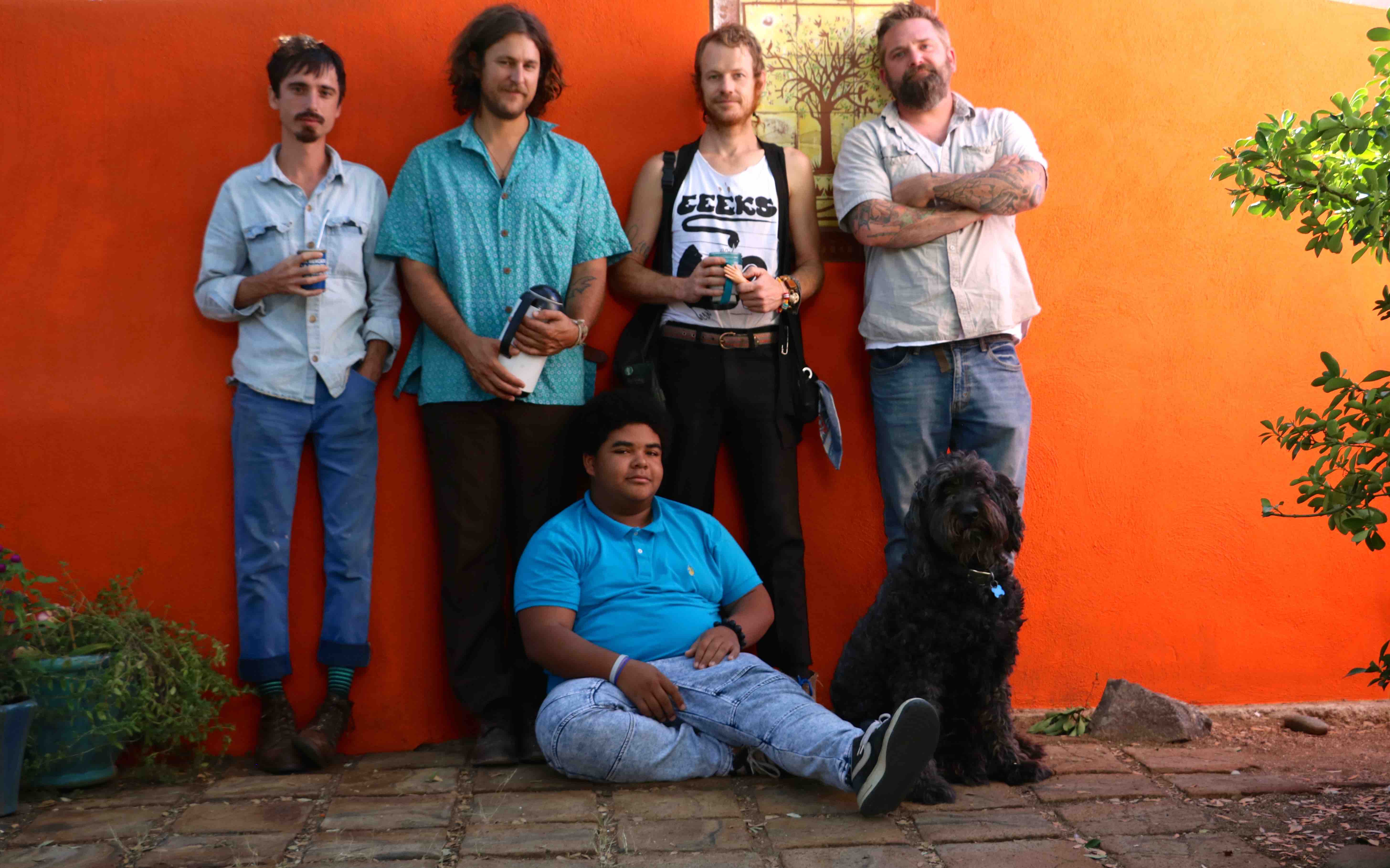 If you have ever traveled south from Phoenix and visited Biosphere 2, you have an idea of what a lovely piece of Arizona the Oracle area is. Nestled beautifully on the northeast side of Mount Lemmon, Oracle is also home to one of the most exciting new-ish bands in Arizona, Los Puchos, a passion project of ex-Phoenician Austin Owen.

Owen, 31, is tall with longish, curly hair and an easy smile. Imagine if Heath Ledger and Rosanna Arquette had a son who was totally into the music of the late, great Harry Nilsson, especially if he had gone through a garage rock phase, and there you go. The multi-instrumentalist, known in the Valley for bands like Ladylike, Wooden Indian and Slow Moses, started Los Puchos in 2013 to challenge himself to write more of his own material, but timing was not on his side for the band to come to fruition at that point.

Before Los Puchos could become a full-fledged band, Owen spent two years in Paraguay between 2014 and 2016 with the Peace Corps.

Figuring out the next step was on Owen’s mind as he returned to the United States. With a degree from the University of Arizona in business management, Owen felt as though joining the Peace Corps was sort of a last hurrah and that music, which had been a primary focus for him prior to his Paraguayan adventure, would take a back seat to moving on with “real” life when he got home. The music bug, though, never left, even while he was abroad. 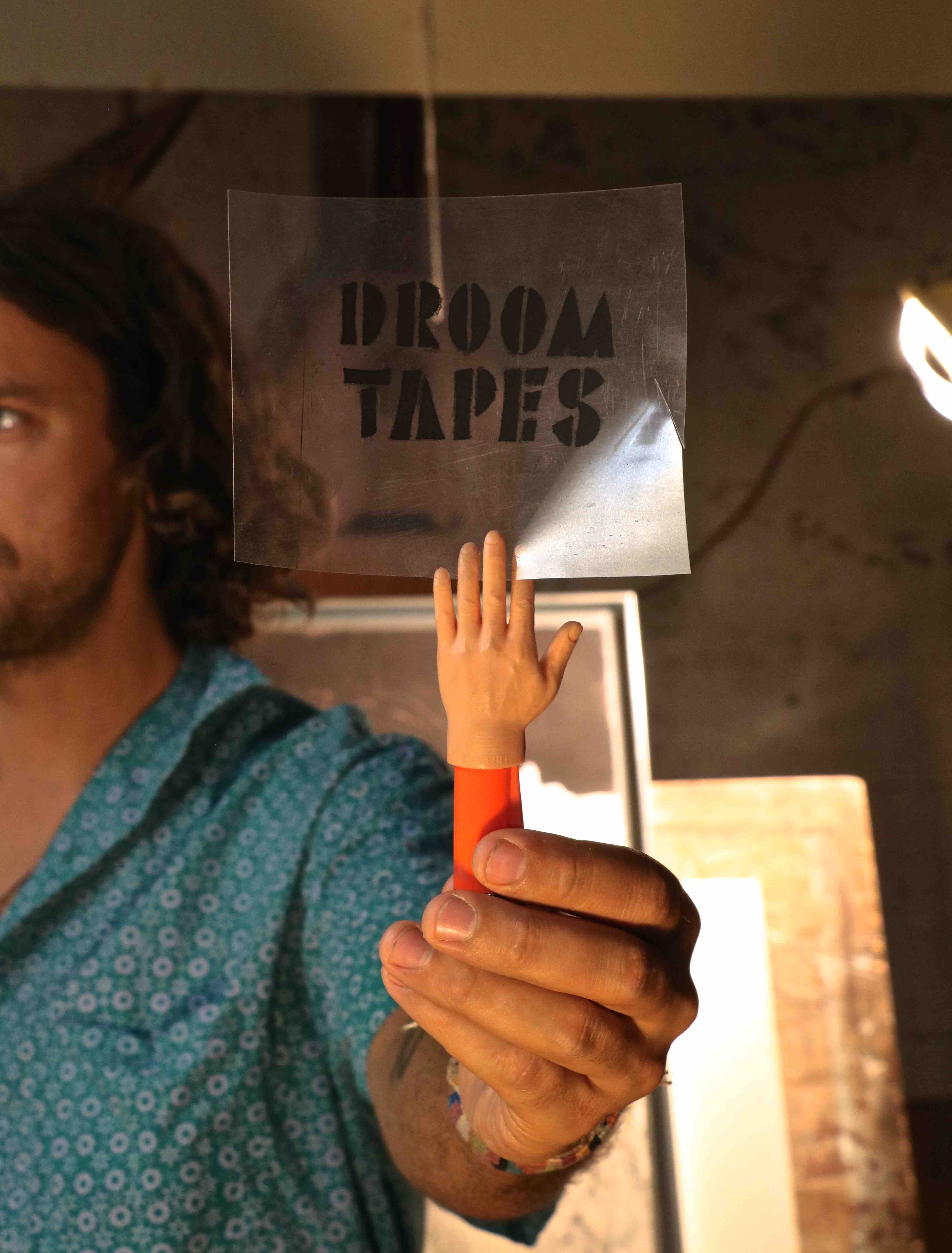 “Because leading up to Peace Corps, it was like the whole hustle, bartending and all that stuff, and playing in a million bands trying to make it, but always being like, ‘I have a degree and I’ll probably end up doing something to pay the bills at some point, in business management.’ Peace Corps was supposed to be the farewell to trying to do anything, trying to make it in any way with music,” says Owen, before continuing:

“But then I found out that in Peace Corps, music was just as much of a tool as anything else that volunteers did in that country. And so, when I came home I was just kinda like, ‘I’m going to take a shot at music, and I’m not gonna do anything if it’s not music related for six months or a year and see how it goes.’ It’s been going really well.”

Prior to Owen’s heading to the Southern Hemisphere, Rubber Brothers Records released an EP of Los Puchos material on cassette, as well as a split cassette with Owen’s former band Wooden Indian. These early songs are delightful and have a great garage rock vibe. Imagine early Sebadoh meets Beach Slang with a hint of Nick Lowe. Definitely worth checking out if you have access to a cassette player. 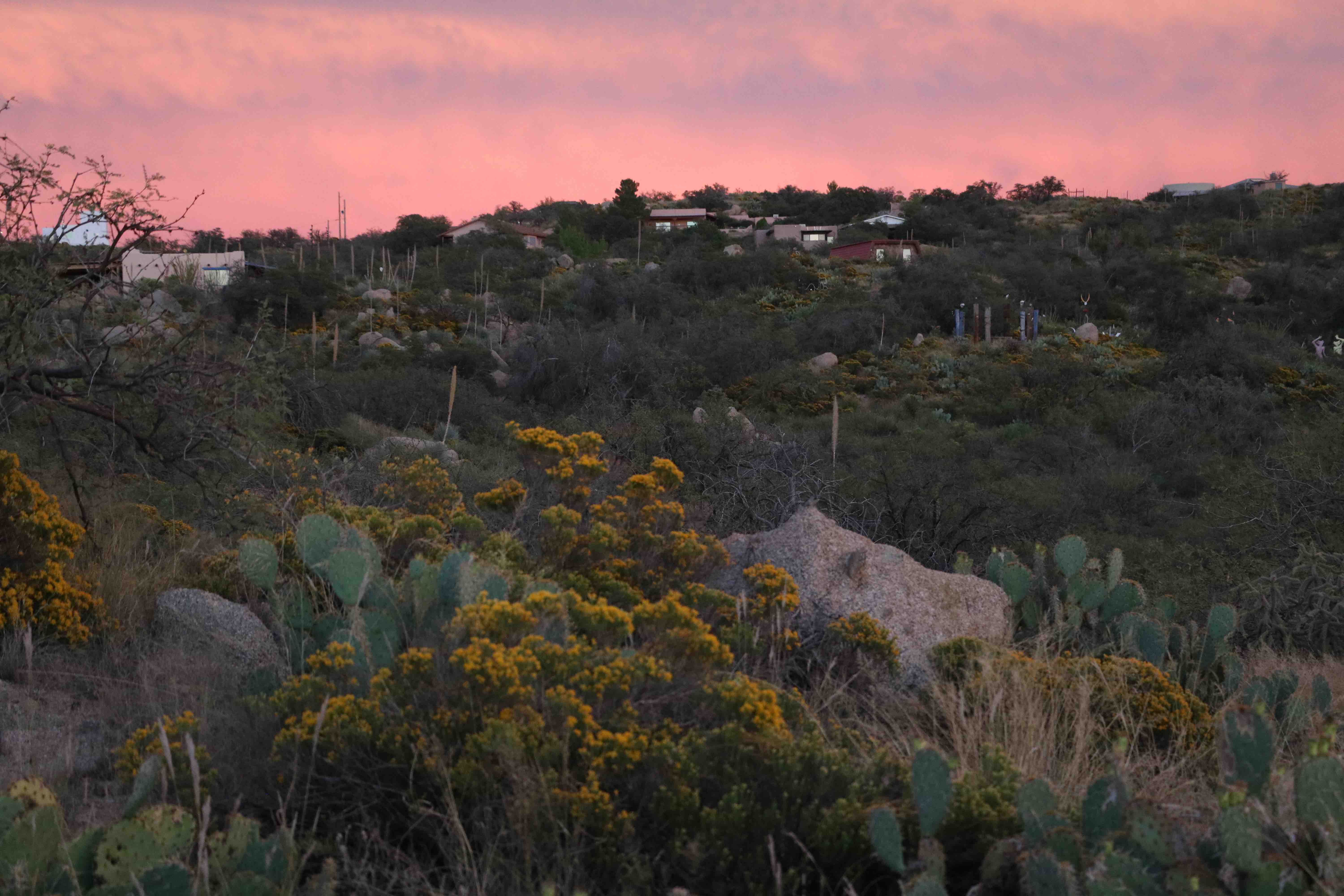 During his time in Paraguay, Owen wrote several of the songs that will appear on Los Puchos’ first full-length release, Droom Tapes, which will come out later this year. Of the newer songs written for Los Puchos during his Peace Corps stint, “Floating on the Water” has a decidedly strong nod to the aforementioned Nilsson’s fantastic 1970 album The Point, and could even be a lost track off that record. Inspired by a trip to the Rio Manduvira with friends in Paraguay, “Floating on the Water” is one of the best songs on the album and will surely bring a smile to the face of many listeners as Owen confidently sings:

“Cool water deep, I’d like for you to carry me.

I’m trying to take it easy. And just to make it easy, I lay back my head.

Floating on the water.

Floating on the water, no one else around me makes a sound that I can hear at all.

It’s like I disappeared when I got in here. And life is just a breeze when you disappear.”

“Good Love” is another great song Owen wrote while in Paraguay, about his feelings for his longtime girlfriend, Tina Bolt. The two were in a relationship prior to Owen joining the Peace Corps but decided to go their separate ways while Owen was out of the country. As the time approached for Owen to come back home, he realized he wanted to broach the subject of rekindling their flame but didn’t know how to bring it up. So he wrote “Good Love” and sent her the demo.

Luckily for both, the song was a hit, and while it is reminiscent of the indie rock stylings of James Mercer (The Shins, Broken Bells), it is nothing short of brilliant. Like Natalie Portman’s character Sam said of The Shins’ “New Slang” in the 2004 film Garden State, “This song will change your life.” Indeed, “Good Love” changed the lives of Owen and Bolt, who remain together to this day. Romance is a key element in Los Puchos’ songs, and Owen clearly displays a deftness for crafting hook-laden songs featuring well-turned lyrics that tug the heartstrings. 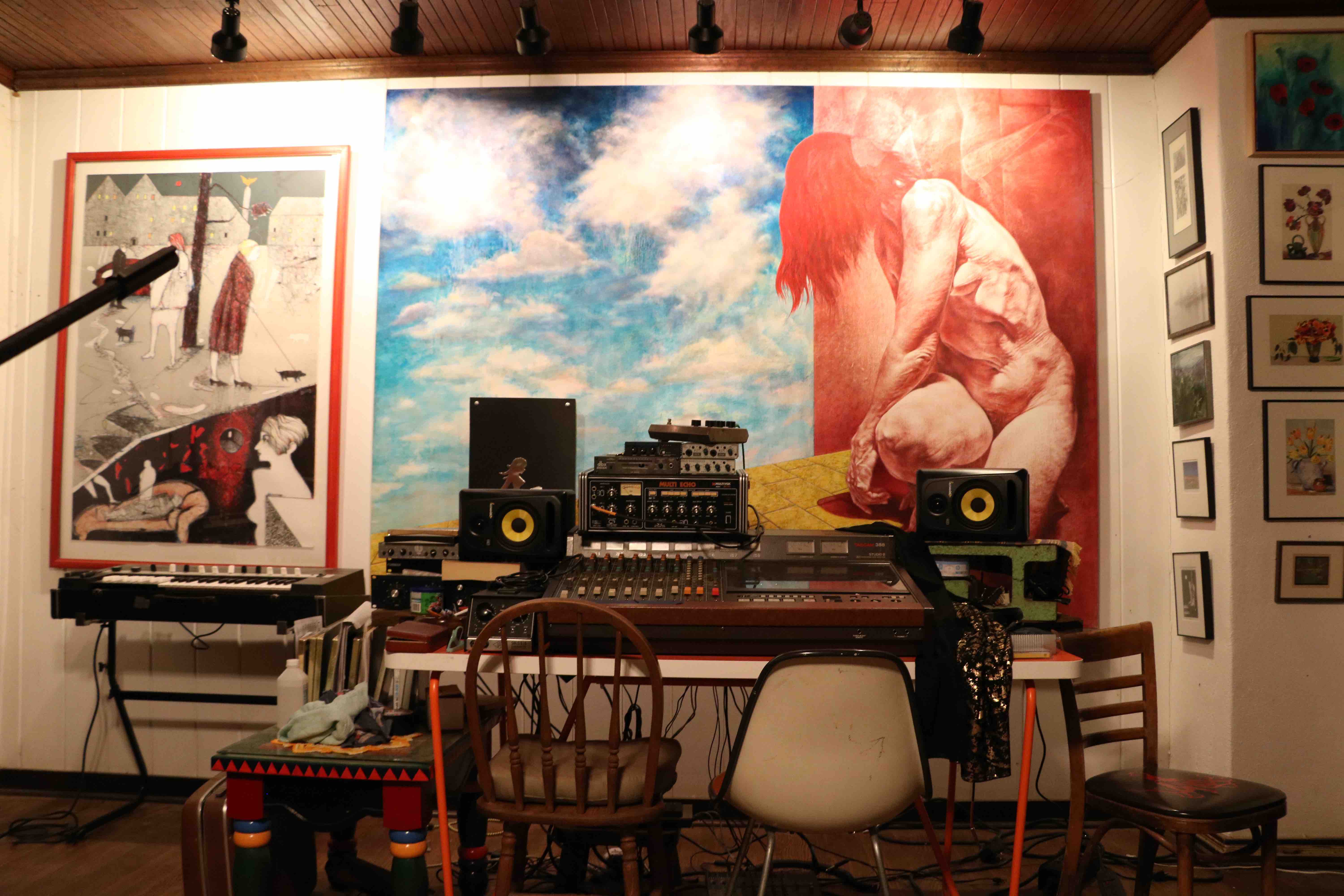 Owen shows a remarkable talent for storytelling with lyrics, and it takes his fantastic musicianship to the next level in Los Puchos songs. Every track on Droom Tapes has a story behind it, and according to Owen, there were more than 30 possible songs to choose from before he selected the 11 songs to release later this year. There is a diversity in the sound across the album that is refreshing, as Owen draws his work from a variety of influences, including what seems to be a tremendous amount of inspiration from his partner.

Another standout track on Droom Tapes, “Found Letters,” was inspired by Bolt. After the couple moved to Oracle, Bolt found an old letter from 1982 whose author was most likely in her teens and writing to a friend about her sexual desires. Bolt suggested that Owen write a song about the letter, and while the two were on a drive from Oracle to Tucson one night, they saw a full moon rising over Curves Cabaret (an adult entertainment establishment on Oracle Road in Tucson, for those familiar or curious). At that moment, Owen decided to write the song. The finished product is tinged strongly by Owen’s neighbor Matthias Düwell’s skronky saxophone, which is reminiscent of early 1970s David Bowie songs.

Apparently Düwell had been in some post-punk bands in Germany in the late ’70s and early ’80s, along with being a visual arts instructor at Pima College in Tucson. Owen was pleased to see him standing outside his house smoking a cigarette as he walked back from the studio one day after recording the drums and guitar for “Found Letters.” 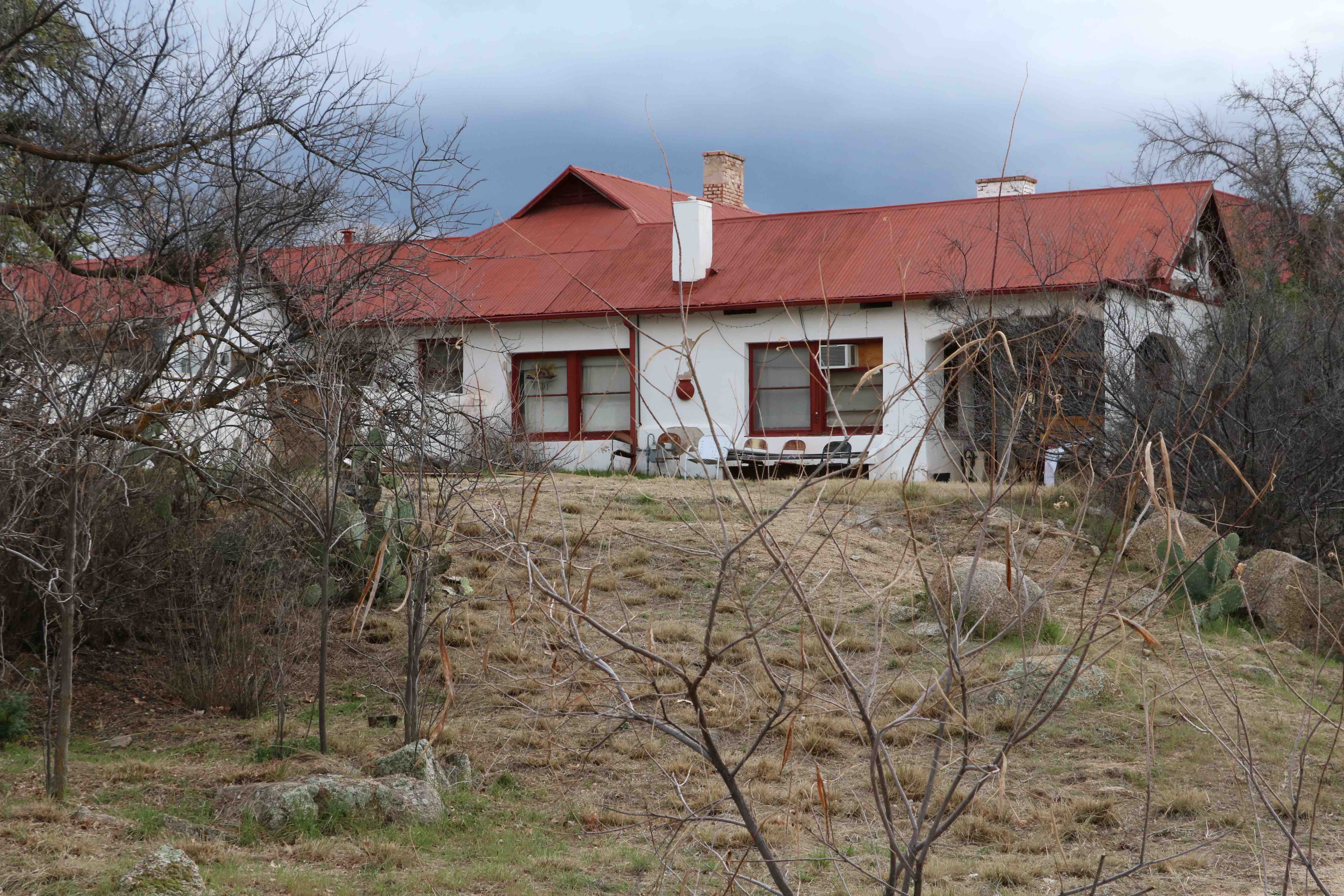 Owen put on a German accent as he quoted Düwell: “This riff you play, I like this riff. But do I have to hear it anymore? I would change a couple of things about it, but it’s a good riff.” Owen continues, “I was like, ‘Yeah, we’re done. You don’t have to worry about it. Do you want to play saxophone on it?’ And he was like, ‘I will play saxophone. No melody though. I don’t like melody. I make noise.’ And I was like, ‘Great. That’s perfect.’ And so he came in and did it in two takes.”

In addition to Düwell, longtime Owen collaborator Wally Boudway (drums) and Andy Hillard (guitar), Stephen Booth (bass) and Cougar Miller (percussion) are all part of the live version of Los Puchos. At 15, Miller is the youngest member of the group by 16 years and a neighbor of Owen’s. Thanks to Owen’s dog, the two have become fast friends and musical collaborators.

“Yeah, his dog comes up, eats all our food, then goes back to his house and throws it all up. First time I met him I fell out of a car. That was unusual,” shares Miller.

Miller’s grandfather, renowned Tucson artist Andrew Rush, is creating the album artwork for Droom Tapes. Rush is a founder of Tucson’s The Drawing Studio and lives at the Rancho Linda Vista arts community, where Owen and Miller also reside. Working with Rush has been a dream come true for Owen. 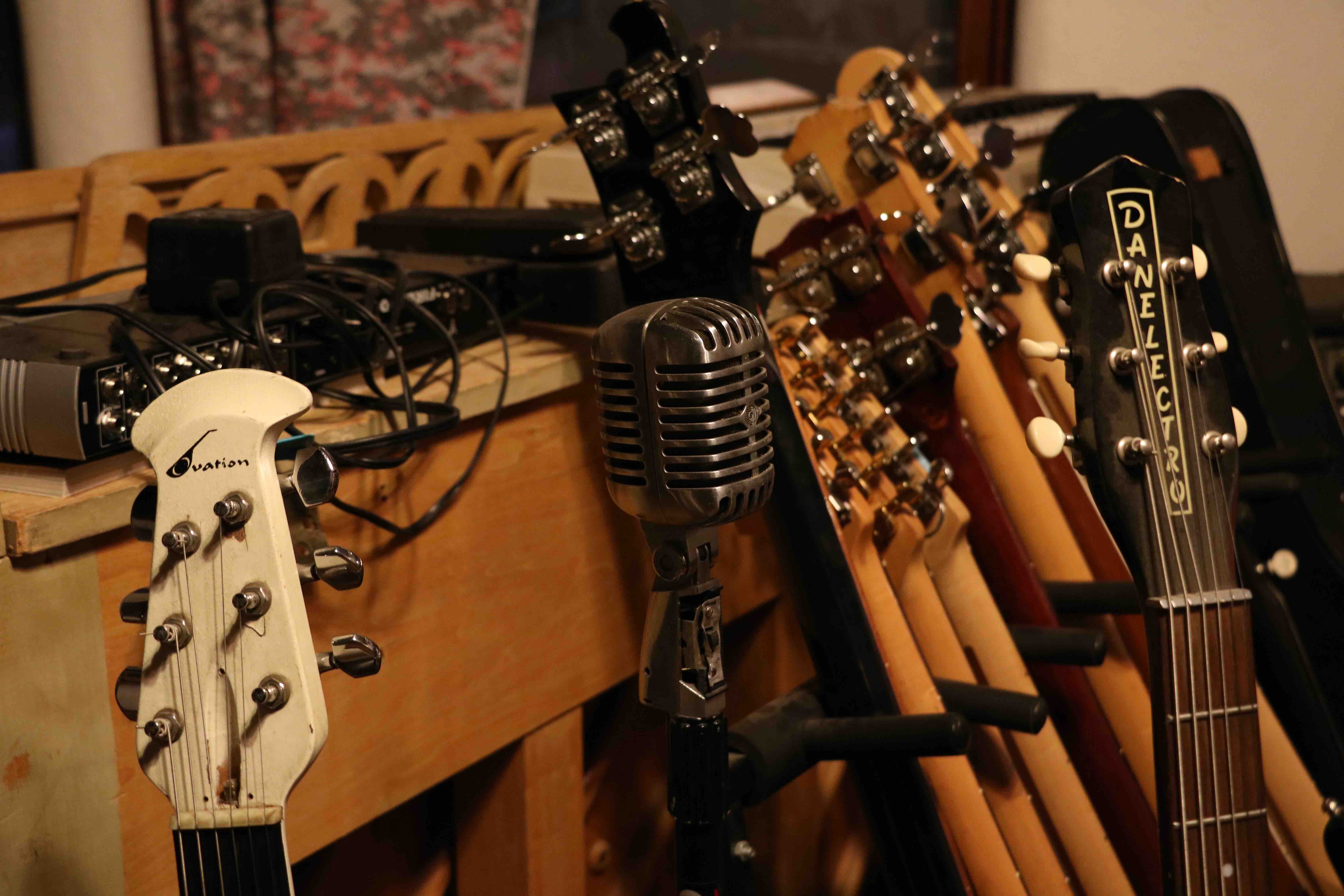 “If I’m half as open-minded as Baba [Rush] is when I’m 85, I’ll be doing good. It’s an honor to have him doing the artwork, and he has had me extremely involved in the process since the beginning,” says Owen.

If Los Puchos were a stock, our advice would be to buy, buy, buy and buy some more before everyone else grabs all they can. Owen’s songwriting is top notch, fearless and ready for the next challenge to come along. The band is looking forward to their first Phoenix performance and are currently in the process of booking a show at one of the downtown venues for late summer or early fall, so keep your eyes open. But for now, if you’d like to check them out, you can find live videos of several new Los Puchos songs on YouTube and some older material from 2014 on the Rubber Brothers Records bandcamp.com page. 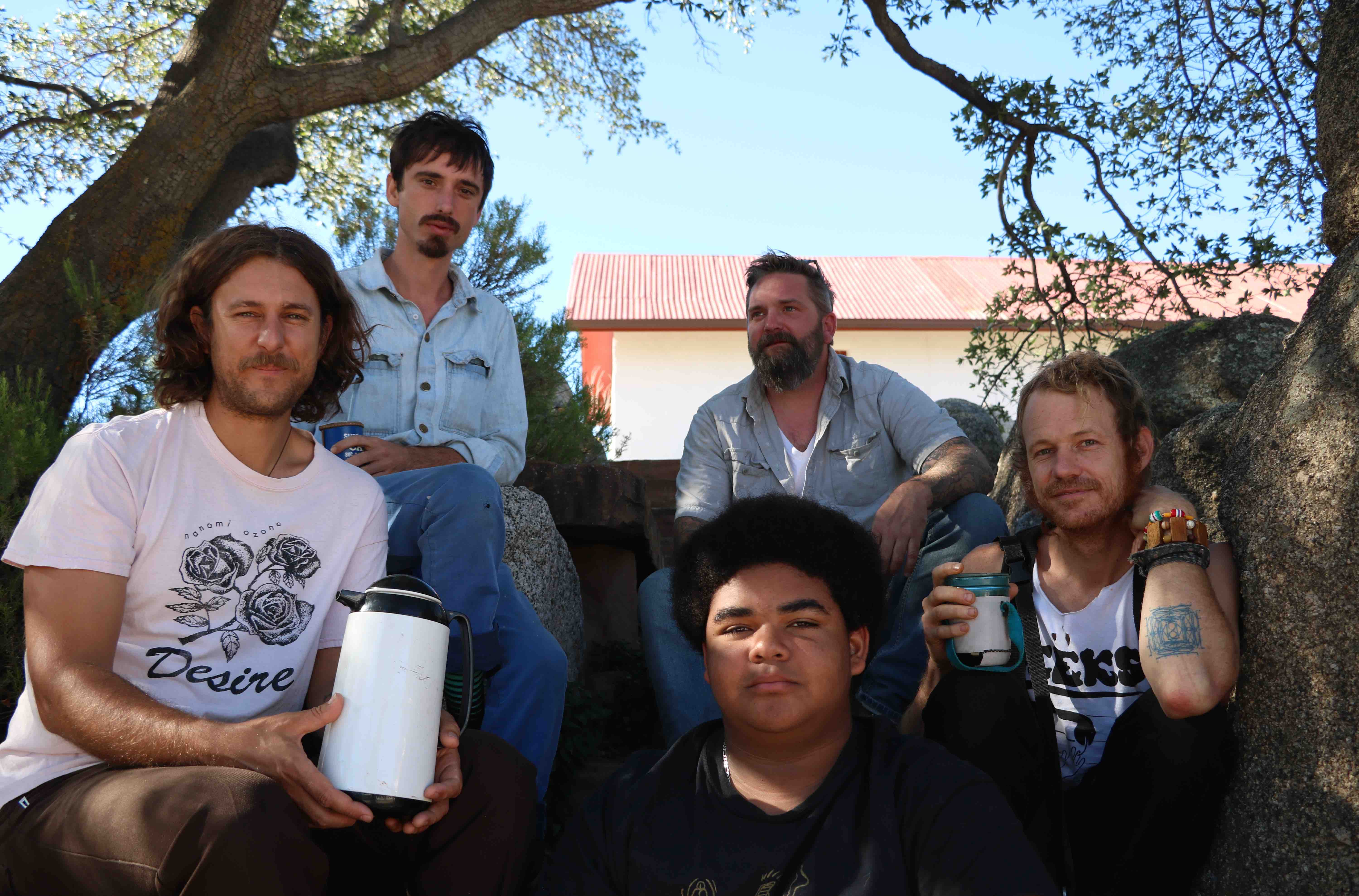