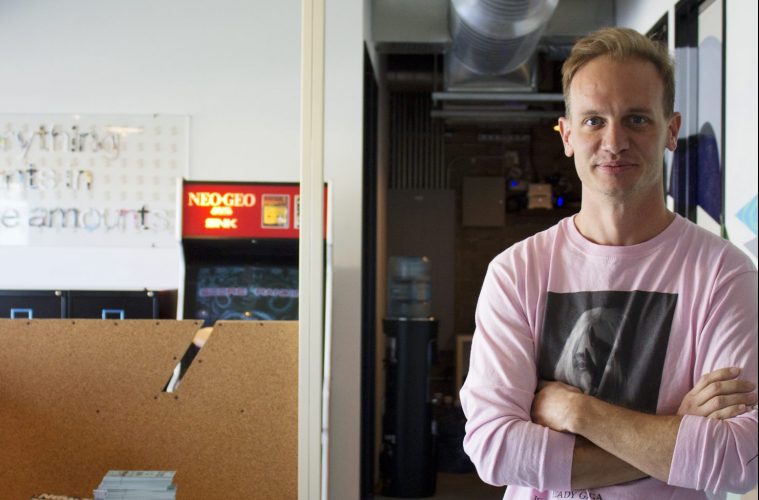 Who Is Chuckie Duff? 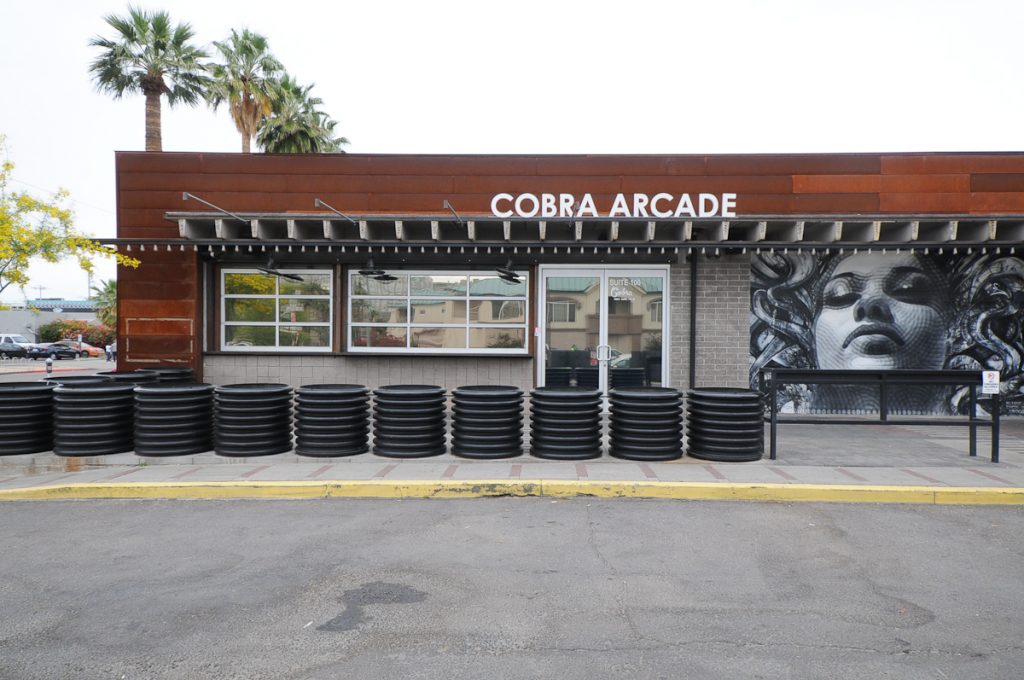 Downtown Phoenix was a different place even just a few years ago, especially on a Friday night. Think of the corner of McKinley and Second Street. Where once sat a sleepy office building now is Cobra Arcade Bar, with its raucous Friday and Saturday night crowds spilling down the block.

Ariel Bracamonte, or Ari as he prefers, assembled and restored vintage arcade games for years while trying to get Cobra opened. Even he had his doubts about the location. But not Chuckie Duff. “He’s a visionary, he can see things. I would have never thought Cobra worked in that building, but he knew it would,” Ari recalls. “When we first looked at it, it was just cubicles.”

It seems like every day a new building packed with condos appears on the skyline and the units sport whopping price tags reminiscent of LA or New York. Often enough, in the coffee shops and bars that are sprouting up with nearly equal frequency, you’ll overhear someone bemoaning the speed and character of this development. They’ll likely throw around the word gentrification, usually contorting their face as they do.

And it’s true, whether you like it or not, downtown Phoenix is gentrifying fast. But it’s important to remember what the area was actually like before the recent boom.

“If you look at when Chuckie and those guys first came into downtown, it was a pretty desolate place. It was the kind of a place that the sidewalk rolled up at nighttime,” said Christine MacKay, the community and economic development director for the City of Phoenix. “Fast forward to 2008, when the light rail opened and ASU’s downtown campus really kicked off. Now there are about 13,000 ASU students in downtown, but more importantly, this has really driven the residential. There are about 4,000 high-density residential units either planned or being constructed, with 1,900 of them finished in the last 12 months.”

While many of the downtown developers are giant corporations or out-of-state private equity groups, not all are such distant, impersonal entities. Once the bassist for local indie band Dear in the Headlights, Chuckie Duff is a Phoenix developer who focuses on rehabbing and restoring old buildings rather than tearing them down.

Without Chuckie, you wouldn’t be able to drop tokens at Cobra, pick up a plant at Pueblo, take a yoga class at Sutra, catch a show at the Rebel Lounge or – the most recent addition to this small empire – throw back a pint at Gracie’s Tax Bar. And this isn’t even the complete list. Chuckie owns the buildings that house these businesses, and he’s not just some suit collecting a rent check. He is involved, in varying capacities, as a partner, advisor, investor and friend. 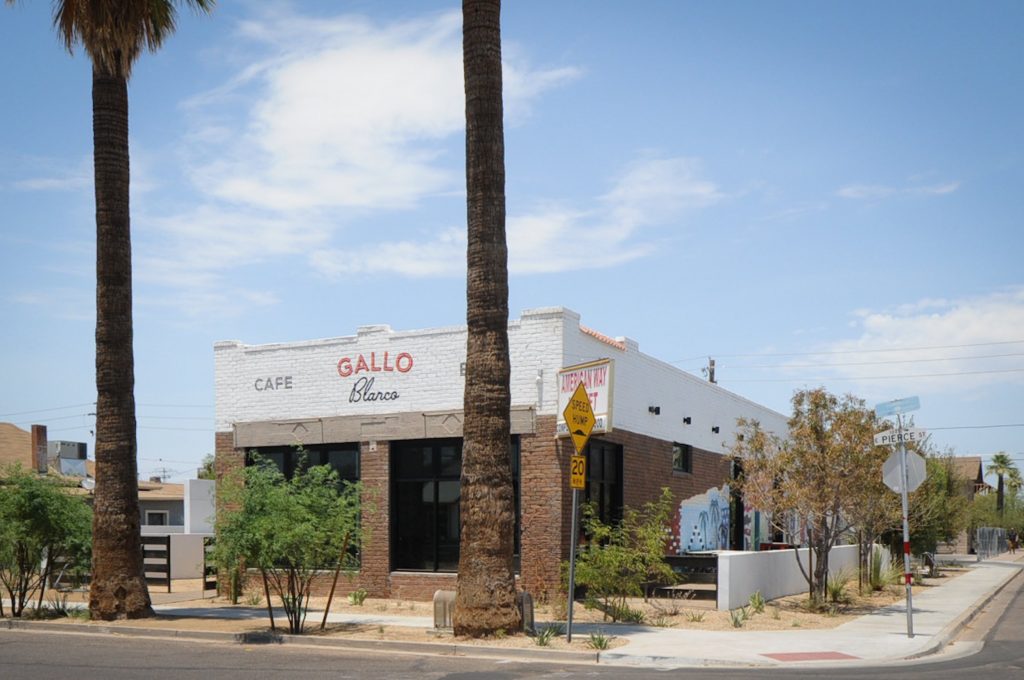 Gallo Blanco, at Ninth St and Pierce, is one of Duff’s more recent tenants

One of his renters, Michael Lanier, founder of The Bosque and Pueblo botanical shops, summed up Duff’s model succinctly. “Chuckie buys old buildings that need work, that could easily get torn down and rebuilt into high-rise apartments or expensive retail, but he finds local businesses that would do well in them and then rehabs the places, putting in all the upfront money.”

Before Duff was a developer, he was a musician, and before that, just a kid who loved to play music. His parents were affluent and insisted on homeschooling prior to college. He said there were times he begged to go to school, especially after he hit puberty, but his parents never relented. Church groups and then music provided him with social interactions, and it seems this early musical influence was seminal both personally and professionally.

Duff is not successful just because of family resources, though obviously that helps. Lots of developers have money. Chuckie is successful because he knows the area, chooses his partners wisely and doesn’t cut corners on the builds. And, of course, having the capital at hand helps. The people he works with aren’t just business contacts, they’re friends (or friends of friends), fellow musicians or part of that certain group of creatives that swirl around downtown in various interminglings and make up the scene. 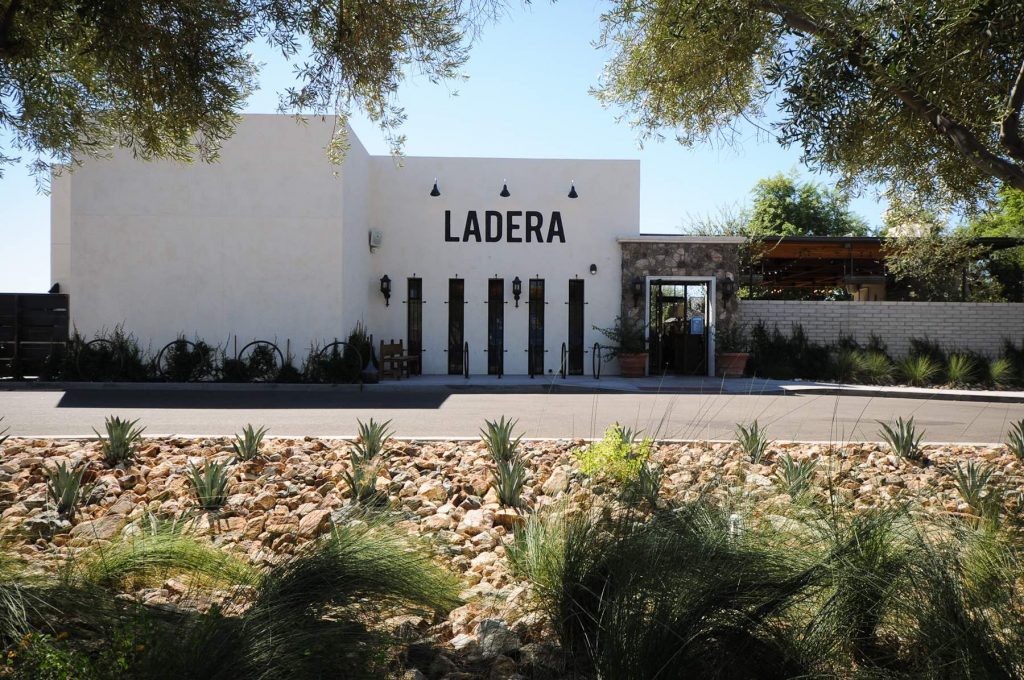 Duff works with Genuine Concepts on Ladera in Sunnyslope

While operating Flying Blanket recording studio and playing with Dear in the Headlights, Chuckie met lots of musicians, promoters and artists whom he would later work with as a developer. There is Dan Hargest, once the vocalist for Pollen and currently the owner of Acme Prints. There is Grace Perry, the founder and namesake of Gracie’s Tax Bar and former lead singer for death metal band Landmine Marathon. They both rent from him.

Although Chuckie has never lived outside the Valley, he has travelled and seen other places, particularly when touring. He saw lots of bars and entertainment districts. He saw that these cities had things that Phoenix didn’t, but maybe could.

“This is sort of my soapbox about Phoenix,” Chuckie said as he leaned back in his chair and began animating his words with sweeping gestures. “There’s just so much opportunity here because we tend to be one or two steps behind other cities. So it’s just finding something that doesn’t exist that people want and filling it in. In Los Angeles, there are plenty of dive bar concepts, with tons of competition in that arena, but in Phoenix there is the first-mover advantage.”

“There have been arcade bars across the nation for the last decade in cities much smaller than Phoenix that are very successful. No one had done one here correctly and in the right location. It’s just fun to be able to bring an idea like that to completion and have people get it right away. I’m obviously a big proponent of Phoenix and am always trying to convince people to come here and do things, because there’s still a lot of demand to be filled.” 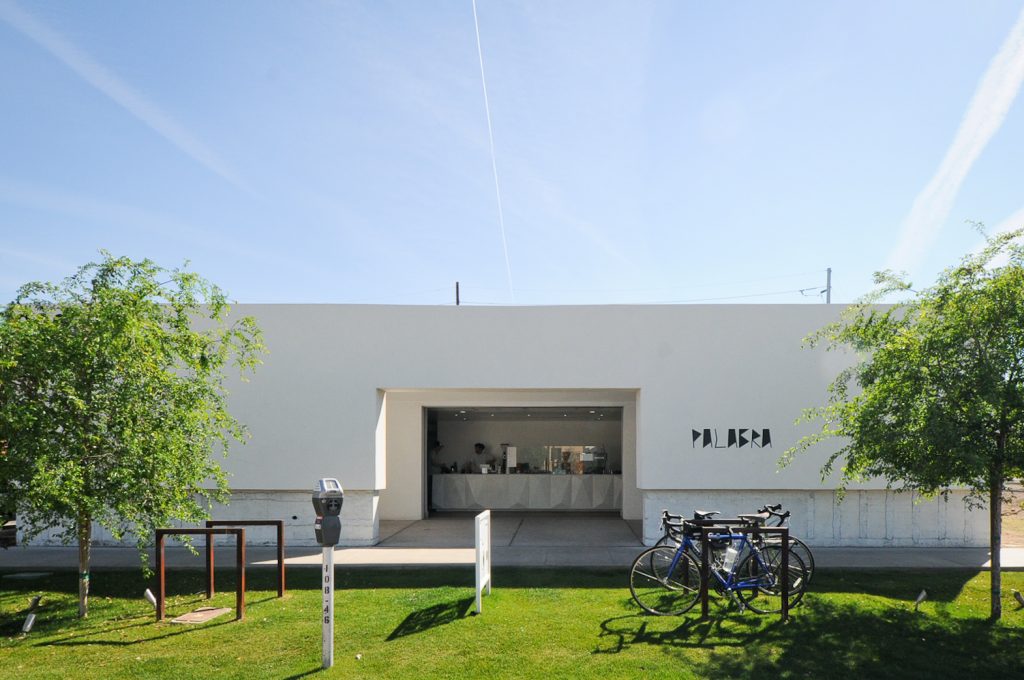 Palabra, the design-conscious salon, café and gallery is housed in a Chuckie Duff building

The way Chuckie catalogues the businesses he works with is emblematic of his approach. When he recalls how a particular venture started, it’s always in the form of a story and, more often than not, one set at a bar. Take the night Chuckie learned about Ari’s plans for an arcade bar. “I was at the Monarch seeing Boys Noize, hanging out with my friend Jeremiah, who is president of Gator Records,” Chuckie recalled. “He was telling me about his friend Ari who has all these classic video games and wanted to start a bar, and I was like, ‘Hey, I just bought this building and you should come look at it.’ These things always seem to happen that way, a little bit fortuitously, a little bit randomly.”

There’s also the story of how he began working with Jorge Torres of PALABRA, a hair studio, gallery and café on First Street near Roosevelt. “My stylist, Zack, worked there, and that’s how I met Jorge and found out they were losing their space,” Chuckie said. “We were having a few drinks one night at Lux, and I was like, ‘Well, let’s find you a building.’ After looking at a few, that one seemed like the right thing. We were actually able to pick up two dirt lots to the south as part of the purchase, and I feel like we paid below market for it.”

After realizing that the touring life wasn’t for him – Duff was married at the time, with a young child – he pursued the most immediate opportunity available to him. “My dad said if I got an MBA, he’d hire me, so I went back to school, did that and started working for his company,” Chuckie said. “They own apartments, most of which are straightforward suburban stucco buildings, and so I got a feel for doing that for a few years.”

In 2010, Chuckie started exploring some of the smaller apartment complexes downtown. “I was looking at these deals downtown, and the economics just didn’t make any sense to me. They were so inexpensive. Of course, we were in the recession and things were difficult, but I was like, ‘There’s no way we can lose money on this.’” Eventually they acquired the Continental Apartments, a two-story 1960s garden-style building on Third Street and Portland. 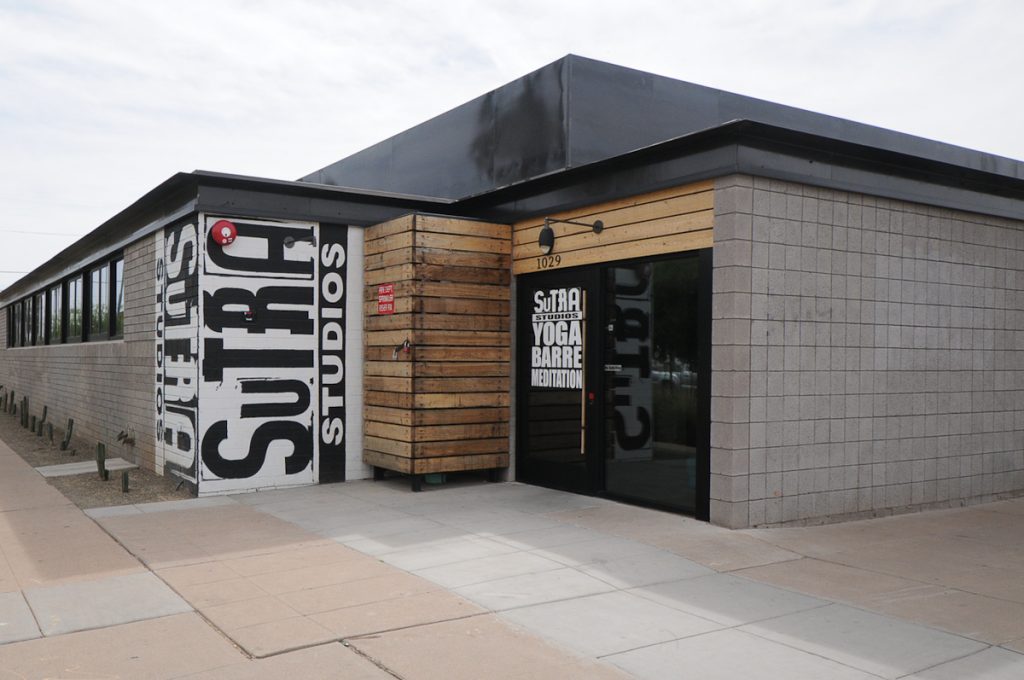 “We sandblasted it, picked an interesting contrast in paint color, went inside and did concrete floors and new countertops, and for lack of a better word, did a ‘hipster’ remodel,” Chuckie said. “And people really responded to it, so we started doing more of those. Next, we did one on Fifth and Willetta called the Carol Mary, which was vacant when we bought it, except for about 30 cats that we had to re-home.”

After a few of these smaller apartment buildings, Chuckie made the leap into adaptive reuse, which is urban planner speak for changing what a building is used for, like when an old factory gets turned into a bar or restaurant.

While it sounds simple, there is a lot of work and expense involved. There is the rezoning process, and then there is the construction side. Rehabbing old buildings is a costly and unpredictable endeavor, Chuckie explained, and once you start tearing out walls, you never know what you’ll find.

“I tend to spend about twice as much as I budget,” Chuckie explained. “I want to make nice places for people and not cut corners, but with old buildings, you never know. It’s like an onion, every time you peel back a layer, you cry.”

Chuckie’s most recent project, Gracie’s Tax Bar, is a good example. Wanting to preserve the shell of the building, including the faded signage from the bar’s previous life as a tax service, Chuckie and his team of architects and builders essentially constructed a new building inside the old walls. It was a crazy and kind of expensive route to go, but he doesn’t scrimp when it comes to preservation. To date, all of his projects downtown have involved preserving and restoring old buildings, rather than tearing them down.

“Phoenix suffers from just demolishing historical buildings and not preserving culture,” said Grace Perry, the owner and namesake of Gracie’s Tax Bar. “Chuckie is a huge advocate of preserving Phoenix culture, and both of us truly care about Phoenix and want to make it better.” 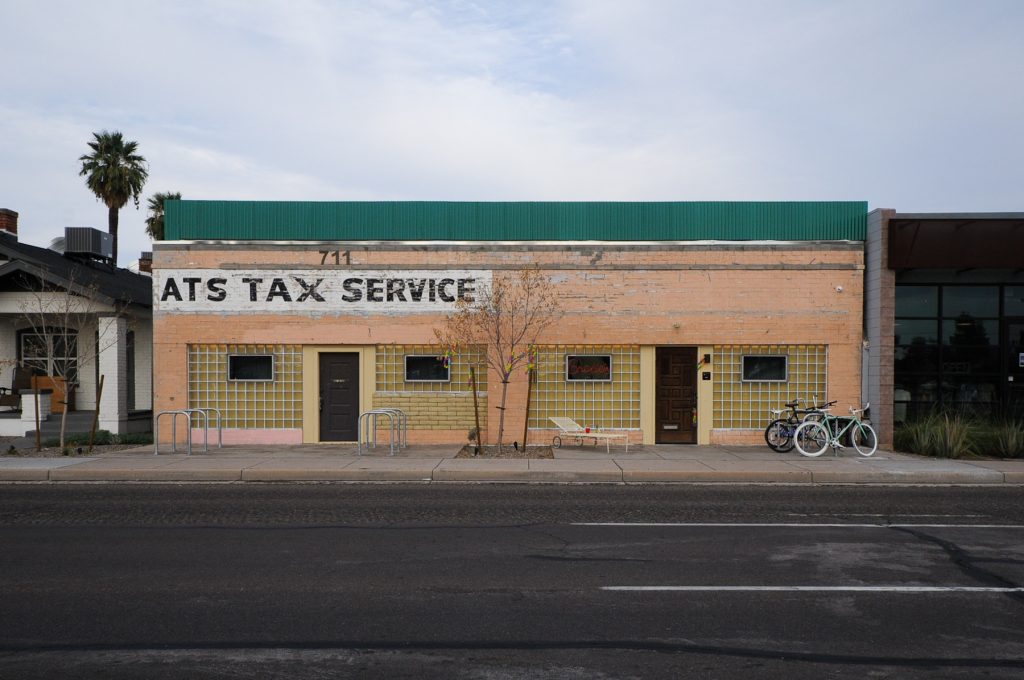 Unfortunately, even Chuckie is starting to be priced out of the area, shifting his focus further afield with a development at 10th and Pierce (home to Gallo Blanco) and a recent acquisition on the north end of the Warehouse District.

“It became 2015 and I couldn’t afford anything between Seventh and Seventh anymore,” Chuckie said. “Suddenly these apartments are coming out of the ground. You see cranes everywhere, and I can’t afford to buy anything with meat on the bone, where I can spend a little extra on my tenants and make sure to do it right.”

High-density residential units are coming available by the thousands, and they’re actually finding tenants, too. While this change does drive up rents, pricing out poorer people, it also creates areas that are more walkable and capable of supporting local businesses.

“I appreciate the trajectory. I think some of the buildings are kind of boring. There’s not as much character as there used to be, so that sucks,” said Lanier. “But the more people that come in, the more buildings with character you can eventually get. The artists that can stick it out will end up with some really incredible spaces to show and people that can afford to buy their work. It’s sort of this huge web of pros and cons, but I’m an optimist, so I kind of see all the positives in it.” 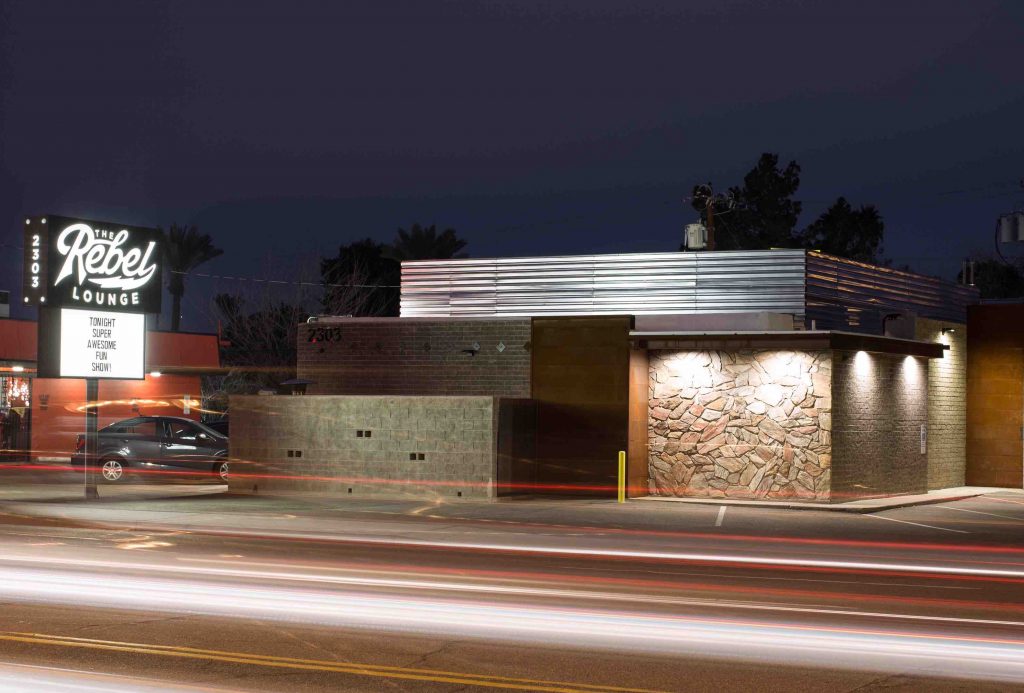