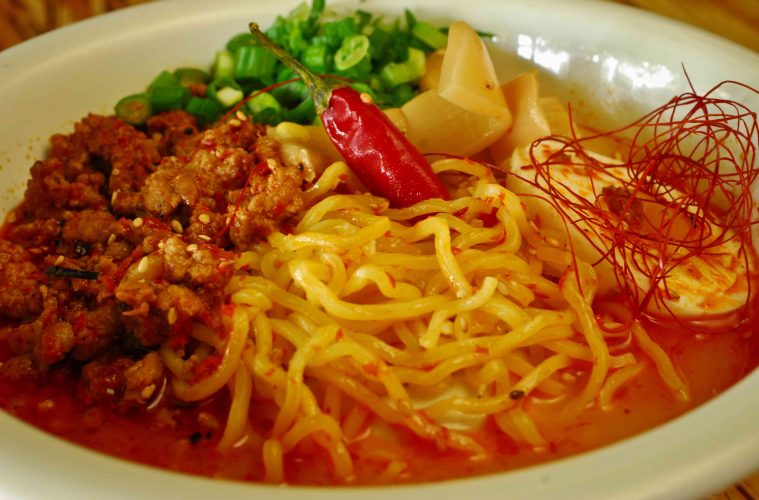 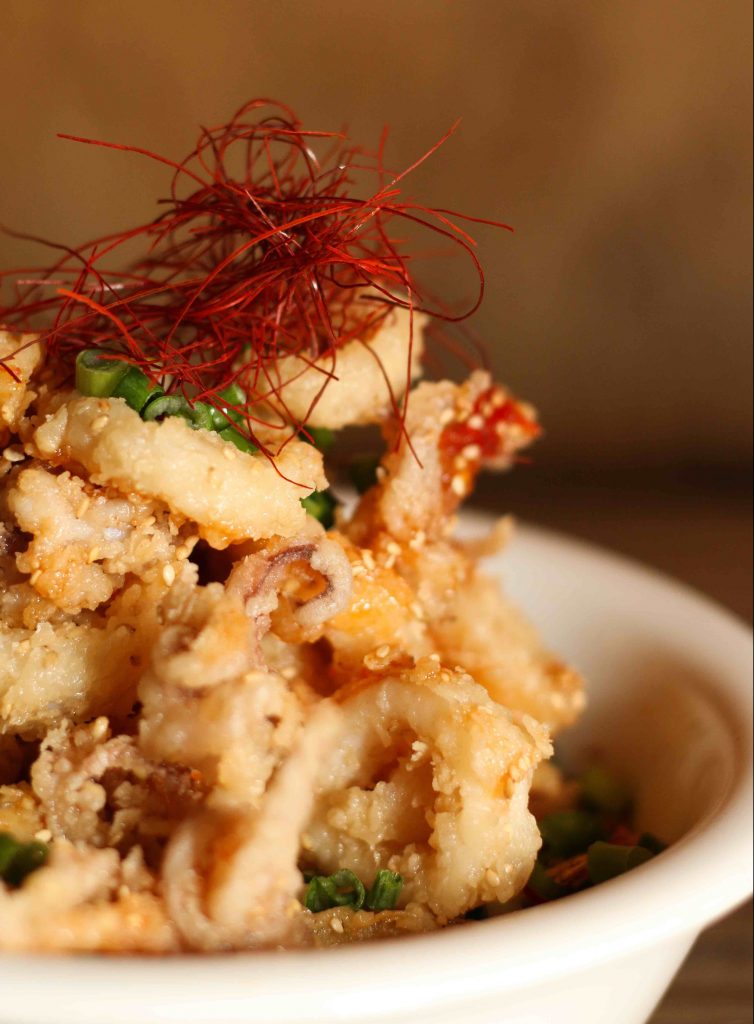 Foodies in Phoenix are used to exporting our good taste to the rest of the state. Local heroes like Pizzeria Bianco, Pita Jungle, Four Peaks and a litany of others have become templates of gastronomic goodness that have been formatted, presented and rolled out to other AZ cities. We’re the culinary big kid at the table. But every so often, a little gem from outside our funky Phoenix drops into one of our neighborhoods. Sometimes they stumble (I’ll miss you, Nimbus Brewhouse), and sometimes they plant a flag and emerge into the local foodscape.

SoSoBa Noodles is one of those spots. Transplanted from Flagstaff, these groovy guys see themselves as a “chef driven” noodle spot. What does that mean? After repeated visits, I’m prepared to say that means a couple of twists on some ramen favorites, paired with some killer cocktails and lovable late weekends until 2 a.m. Add exceptional prices, and you’ve got a spot that already seems like it’s part of our foodie family. 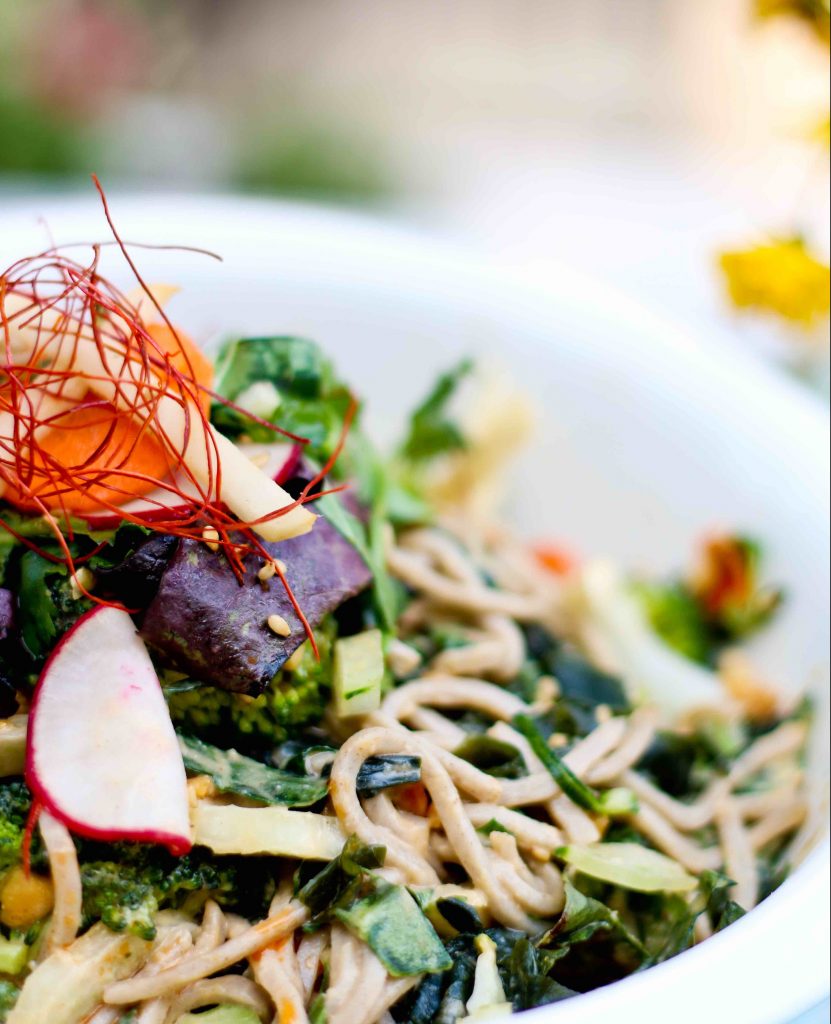 SoSoBa Noodles is on Roosevelt, in the same spot that once housed Centurion. You’ll find nothing else the same except the once-shared address. They’ve expanded the area, doubling the square footage, into a funky remodel that makes the most of the exposed red brick. Interesting local art dots the walls (and appears to be for sale), and a killer soundtrack accompanies your evening. Not kidding here—on one visit we repeatedly busted out our phones to Shazam the track. Evidently I’m a huge Kabul Workshop fan.

The service here is exceptional—on every visit a very happy server walked us through the menu and helped us find just the right choice. They never batted an eye on any request, and efficiently and effortlessly kept the dishes and drinks flowing. Apps are half off during happy hour, which makes for a massive meal with minimal investment.

We liked the Sweet Chili Calamari ($12/$6 at happy hour), a kicky and well-prepared mix of mostly calamari rings, fried to perfection and doused in a slightly sweet sauce. The side salad of shaved veg and greens was no slouch, either. Note: We found the sweet chili sauce to be repeated on menu items. It’s fine, just pay attention when ordering so your meal isn’t just one note. 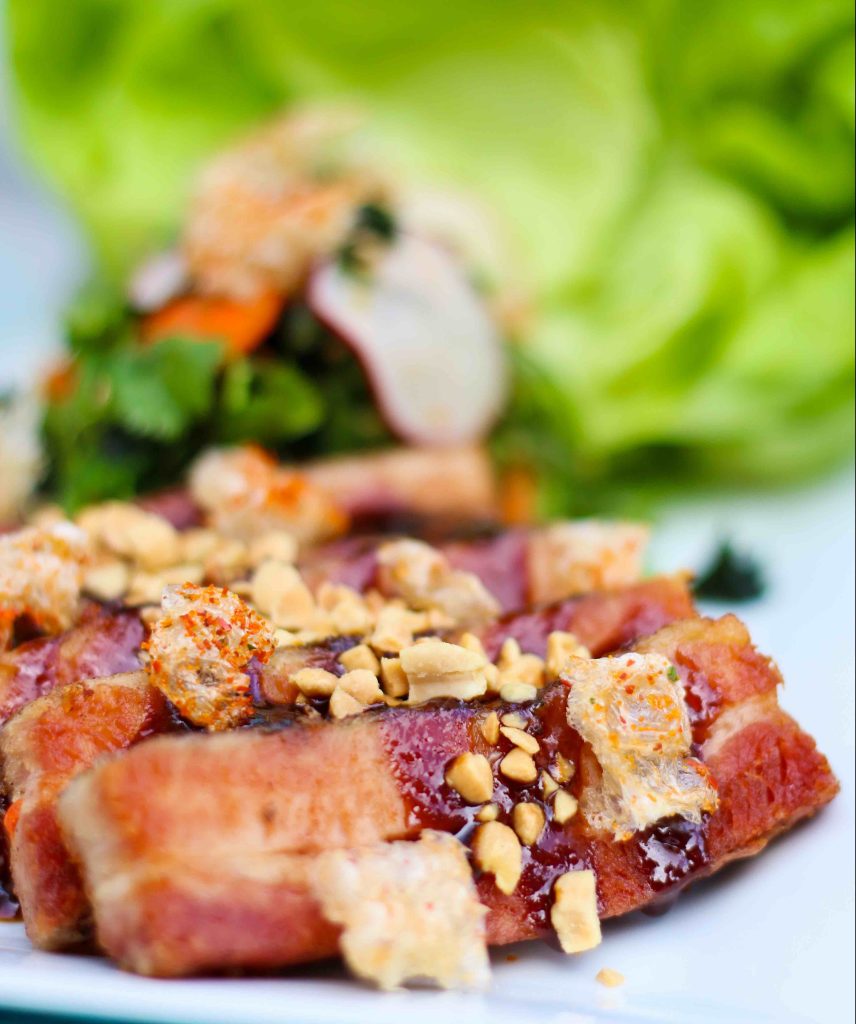 General Tso Tso Cauliflower ($10/$5 happy hour price) uses some of the same chili sauce. Here it’s goosed up with a smattering of peanuts, carrot shreds, mint and garlic chips. I plan on eating this tasty spin on cauliflower again and again. It was repeatedly the first appetizer to disappear.

Shishito Peppers ($9/$4.50 happy hour) defied the roulette odds. Fans of these peppers know that about one or two peppers of the bunch will be nuclear hot (of the wasabi variety: it will clear your sinuses and move on), but we found that proportion closer to 20% here. This is not a problem, since a quick dip in the cooling tahini-like sauce calms things down. I thought that the peppers could have benefited from a bit more time in the sauté pan, as they missed some of the usual blistering that happens, but apparently I was the only one who noticed, since these were gone in a flash.

But we’re here for noodles. Don’t miss our unanimous favorite, Mothra ($12). Buckwheat soba noodles are bathed in green curry—a heady concoction that doesn’t make this dish pho-like. Nuggets of perfectly cooked panko-coated tofu circle the bowl, dotted with sriracha, and they still seem to melt in your mouth even after significant time passes while you eat and chat.

Mr. Karl Katsu ($12) is exactly what you’d expect: a straightforward bowl of ramen with excellent broth, with a panko-breaded chicken cutlet perched on top. Thankfully, the chicken was cut into strips (makes noodle slurping much easier). I wouldn’t call this dish unremarkable—that would be unfair. Rather, this is more of an easy entry for folks who haven’t gone full noodle crazy—yet. 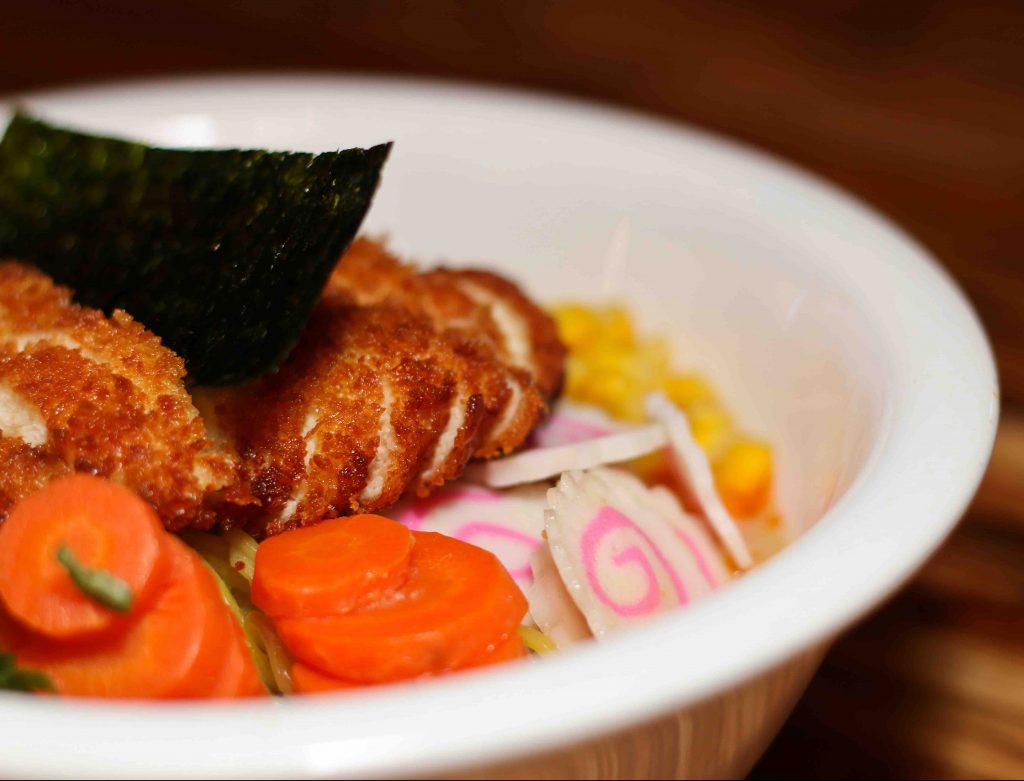 Full-on noodle fiends will enjoy the Mic Drop ($12), which is what happens when protein fiends craft an udon noodle dish. Pork belly, ham fries, chicharones and carnitas load this dish with enough pork to keep Dr. Atkins happy. The house-made kim chi kicks it up a notch. Try the broth before swirling the goodies together—the difference between the broth before and after spice is rather fascinating. I found the noodles to be slightly overcooked. This turned out to be a non-issue. I spent the rest of the meal guzzling all of the broth and seeking out pieces of pork. Pro tip: Chicharones are excellent when crunchy, and not so much when soggy from the broth. Seek and eat those first.

I don’t expect noodle joints to kill it in the dessert department. That would be a wrong assumption here. The Hatcho Miso Carrot Cake ($8) is a shareable homage to a more traditional carrot cake. A gingerbread-like square of cake, slightly chocolaty, is loaded with a massive amount of goat cheese whipped cream, in a take on the traditional cream cheese frosting, with thinly sliced carrots on top and soy caramel on the side. Sweet, slightly savory and slightly shocking (it takes a few bites for your brain to compute the somewhat tart goat cheese as opposed to the traditional whipped cream), we cleared this with no complaints. I thought perhaps there was too much goat cheese topping, but apparently that was just me—the whole plate was essentially licked clean by the end. 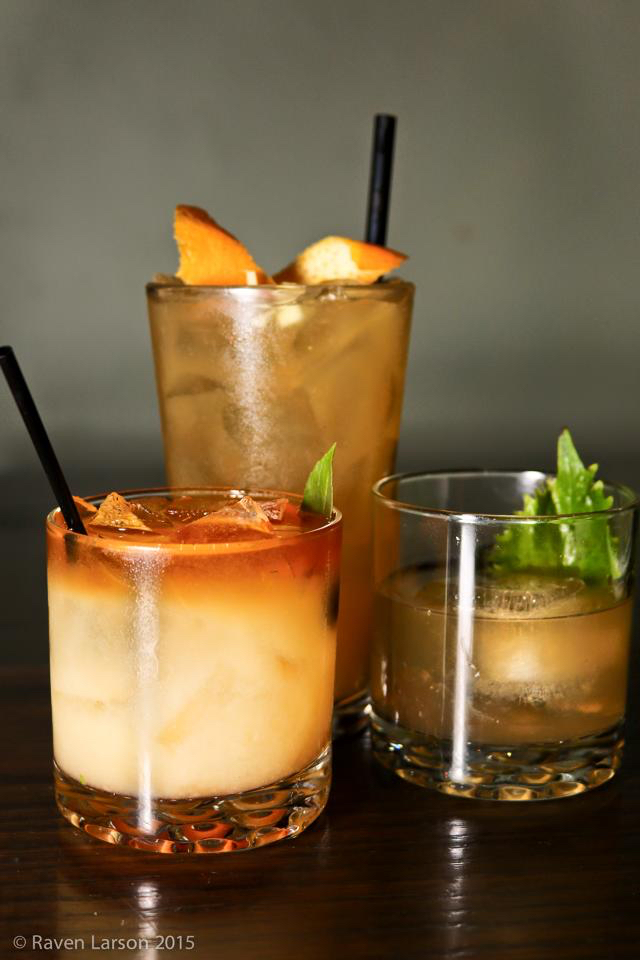 So well done, Flagstaff! SoSoBa Noodles is a funky spin on the classic noodle house, with interesting and whimsical cocktails, as well. And when you can eat cheap (find their Facebook page for their parade of discounts and special dishes) and eat late, what isn’t to love? While authentic ramen-heads might quibble with their non-traditional choices, I’ll leave the authenticity discussions to people who only do authentic. I tilt towards tasty, and I’m happy to go back. Again and again.