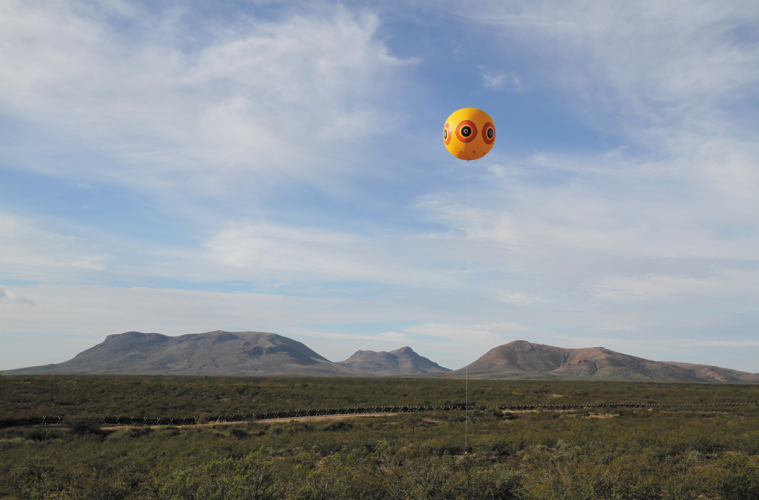 As is the case with any team, an arts collective is only as strong as its members. That being the case, Postcommodity is a powerhouse. An intellectual group, with a resounding concern for human rights and betterment of the human condition, who consistently use art and vision to create and present projects that perpetuate critical thought and action. On October 9, this dynamic trio strikes again with Repellent Fence.

The project is a two-mile land art installation that takes place at the United States/Mexico border at Douglas, Arizona and Agua Prieta, Sonora, and it also includes a series of public events until it closes on October 12.

28 tethered balloons will float 50-feet about the ground, 14 on each side of the border. The balloons are helium-filled and each is 10-feet in diameter. The image featured on the balloons is a replica of an ineffective bird repellent product and showcases traditional medicine colors utilized by numbers of indigenous peoples over many years. 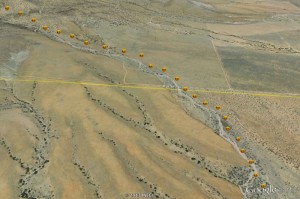 The group says that the purpose of the fence is to

“bi-directionally reach across the U.S./Mexico border as a suture that stitches the peoples of the Americas together,”

and the project’s inherent nature does just that. To make Repellent Fence happen was no simple undertaking. It is the manifestation of dialogues and relationships between people of different walks of life, from civic stakeholders, to citizens, to school districts.

It certainly spotlights the fact that border issues are prevalent, extremely important and in need of addressing but the inherent nature of their project demands looking at these issues in a broader fashion—in ways and with perspectives that take the value of all the residents into consideration. The respectful project is considerate of both the people and the land.

“Content is important to the piece,” says Twist. “A lot of land art pieces are about people making a mark, regardless of the history of the land or the area where the event is happening. This is about matching land art with the political goals of a community that’s divided by a border. It’s a collaboration between cities with both social and economic development in mind.”

Repellent Fence’s drive toward stronger and more inclusive communications between social and cultural groups is where a lot of the project’s beauty lies and that was a critical part of the mission.

Martinez says, “Even though it is only up for four days, it is about reinforcing interconnectedness.” “After it’s gone, what remains is the binational capacity to collaborate.”

Repellent Fence is a truly impactful project that should have a long-lasting effect on those who were active in the process of seeing it to fruition, as well as an endeavor that should be utilized as a model to engender a better state of human communications and interactions.

On the border between Douglas, Arizona and Aqua Prieta, Sonora