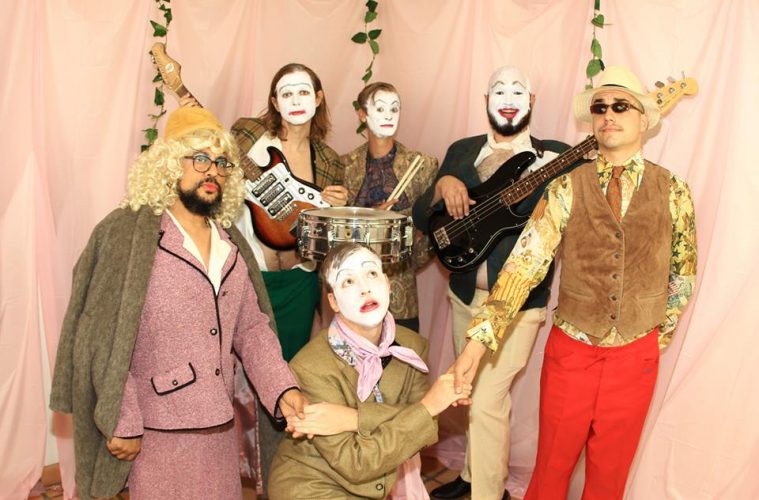 Playboy Manbaby: Don’t Let It Be

In July 2015, I got a message from Robbie Pfeffer that the next Playboy Manbaby record was going to be something extra special. They were still working on it, but he wanted me to know that it was feature worthy for JAVA. I had no doubts, and we agreed that the September 2015 issue would be perfect. I asked him to send me the album. The September issue came and went, and each month I’d hit up Robbie, and he’d tell me it wasn’t done. We played this game for months until I figured he’d just let me know when it was coming.

Just shy of a year from when he first mentioned Don’t Let It Be to me, Pfeffer hit me up with an advanced copy, but told me it wasn’t going to be released for a while. I listened to it, and it was everything he said it was going to be and more, because Pfeffer is actually pretty humble about his own stuff. Another autumn came and went, and finally Robbie said, “How about February?” So a year and a half after our initial conversation, it’s finally here. 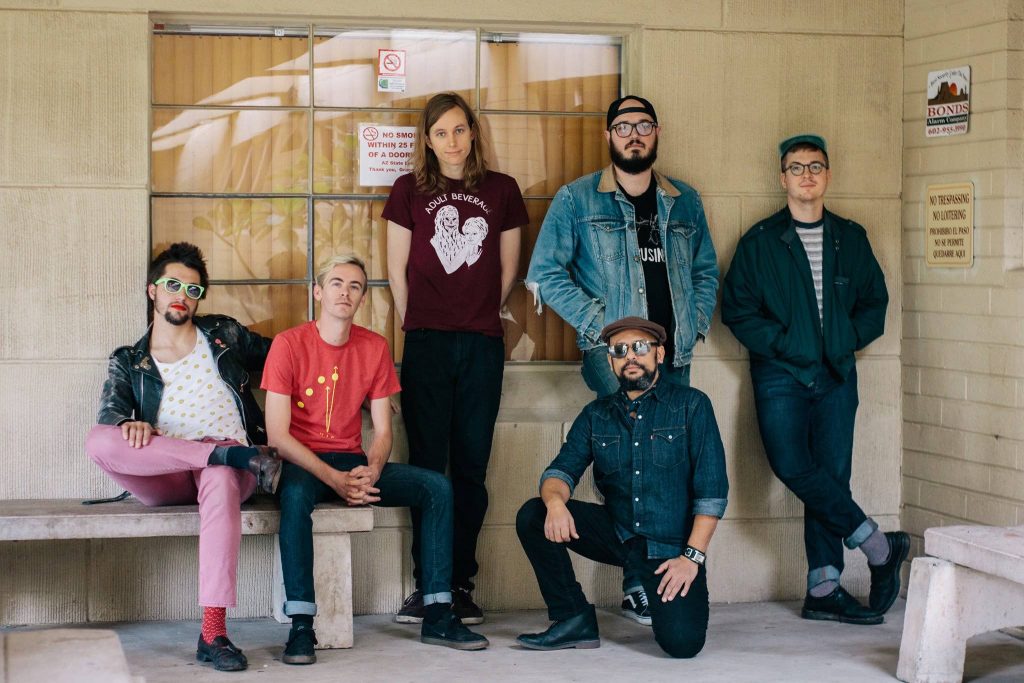 Playboy Manbaby really put their all into this record, and it was critically timed to release just after a new president took office. Their last album, Electric Babyland, was recorded, mixed, mastered and released in 24 hours in December 2014. Don’t Let It Be is a stunning contrast in terms of the two albums’ production methods. For the first time, Playboy Manbaby has captured the energy, spirit and raw vitality of their live show. It’s a damn difficult thing to do in a studio, but somehow they pulled it off with Don’t Let It Be.

In case you’re unfamiliar with Playboy Manbaby, they’ve been putting out some of the most exciting music on the scene since 2012 and could easily lay claim to the title of “Best Live Band in Phoenix.” I first saw them before they released their debut EP at Long Wong’s Firehouse on Apache, and they already had a huge following. It was some of the most original music I had heard in ages, and the tightly packed crowd was slam dancing as best they could. These days it’s the same, but they sell out Crescent and Valley Bar.

Playboy Manbaby consists of Robbie Pfeffer (vocals), Chris Hudson (bass), TJ Friga (guitar), David Cosme (trumpet), Austin Rickert (sax) and Chad Dennis (drums), and what these six men have created is their preeminent album at long last. I’m hoping this is the first of many to follow and that the rest of the world catches on to their sound.

With its clever title and lyrics, Don’t Let It Be is some of the finest socially conscious punk since the days when Jello Biafra led the Dead Kennedys through the 1980s. Playboy Manbaby kicks off the record with their finest single to date, “You Can Be a Fascist Too,” which was released on November 9 of last year. Let’s hope that new listeners understand its wry commentary when they hear it. Musically speaking, it’s filled with perfectly raging guitars, a manic furious pace, wild horns and amusing backup vocals. It’s a perfect punk anthem for the dawning of a new age. From the opening lyrics―“Society’s in the gutter man, it’s really in the pits. Wouldn’t the world be better without those undesirable bits?”―to the ending chant of “I am right. I am correct” the tune is as amusing as it is haunting. It’s almost as if it was written with our new leader in mind, and from his perspective, to boot.

The album shifts gears immediately and introduces “Last One Standing” with a vibe akin to ’60s beach-beat music, evoking a spy theme with its bouncing guitars and horn work throughout. It’s like a Herb Alpert/Hal David tune on Dexedrine. Pfeffer rages as ever, but this music is far from punk. It’s not all about punk anthems here. It’s more about an ever-changing musical landscape that is a showcase for the varying environments to highlight Pfeffer’s signature vocal delivery. He is as much a performer as a musician, and that comes across on this record. It is another politically conscious tune, but a bit less sharply honed. While the music is uplifting, the lyrics are neurotic and rightfully paranoid.

The musical acuity continues on “Bored, Broke & Sober,” where ska becomes a way of life and the level of songwriting and arrangement is even more apparent. Cosme’s trumpet alone would make this a great track, but the rest of the band creates a pure delight. It may be the first Playboy Manbaby track where I find myself more intrigued by the music and the composition than Pfeffer’s tales of modern neuroses.

“Cadillac Car” has a bit more of a garage-rock vibe, and things get a little darker in tone. It expresses dissatisfaction with the nine-to-five grind, at first, and then the situations become more comically perverse. Still, you’re going to cling to the chorus change of “I wanna Cadillac car, a new hair do, I wanna go to work and tell my boss, fuck you!” Every minute is filled with the urgency and rage of that chorus, upon which the rest of the song spins.

Hudson’s bass line for “Self-Loathing in Bright Clothing” could have been lifted straight out of a Black Flag song, and it sets you up for the hardcore action ahead. This is a fantastic rager with slam dancing in mind. For any “over thinkers” out there or anyone plagued by anxiety, the chorus of this track is your mantra: Pfeffer screams, “I can’t breathe, I can’t talk, my mind needs, to just stop.” It’s completely relatable. Whether you hate yourself or not, this is the perfect tune to sum up the feeling that the only exit would be an early death.

Playboy Manbaby takes on beach blanket bingo with “Cheap Wine,” about the joys of being poor and drunk, with the chorus, “I don’t wanna waste my time, I’d rather get wasted and say I’m fine.” At the core of the song is fantastic surf-tinged pop. It is complete satire about the damned who think they can drink their problems away. Pfeffer delivers the vocal so you can relate, but also so you can maybe think about what he’s saying with a wink and a grin.

“Popular” is an outright attack on everyone’s image on social media and the superficial gratification of it all. Friga’s guitar is on fire here, and the lyrics are delivered like a machine gun—easily one of my favorites live, and it comes off perfectly on the record. It’s a complete indictment of a generation living their lives in pursuit of online popularity, and finding themselves empty offline. 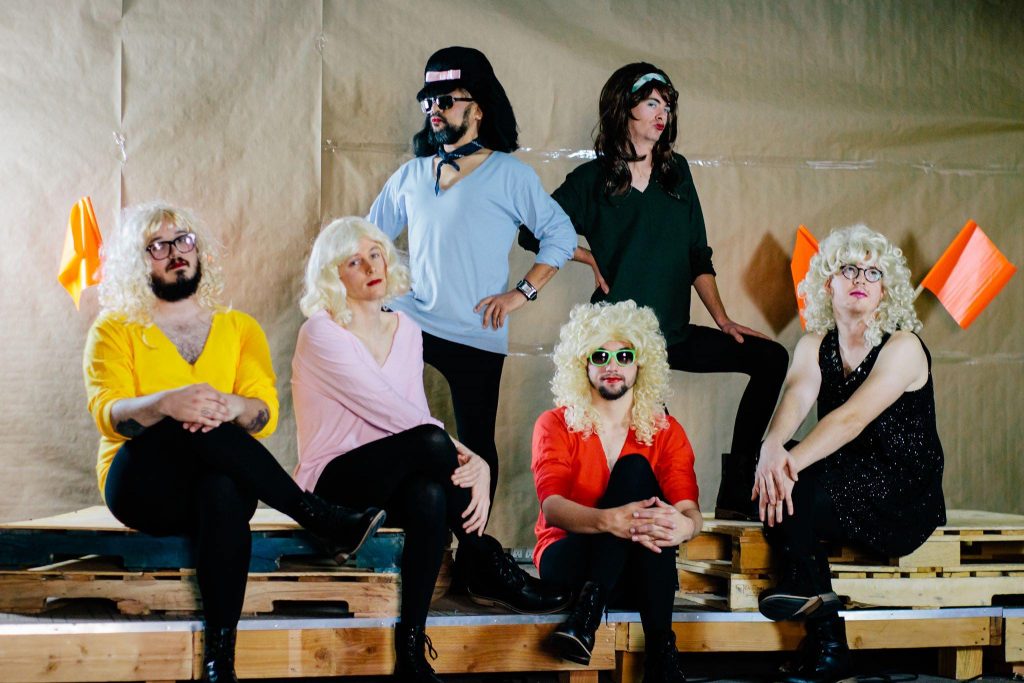 The band takes on a Cramps-like approach on “I’m So Affluent,” while mixing in fascinating backup vocals that provide a psychobilly, spaghetti-Western vibe. It’s like punk rock for the Wild West. You can make your own associations about the refrain, “I’m so affluent, it must mean I’m intelligent,” but it’s an obvious attack on the ruling elite and the billionaire boys club. It’s also as much about the plight of the working class and the working poor.

“Oprichniki” is another lighter tune musically, with flourishes of 1960s pop mixed with their spunky punk approach to everything. The horns are bright, the guitars are on fire, and Pfeffer attacks the post-truth era with, “When there’s a hundred different versions of the truth, it’s a brand new revelation, it’s a thing you can follow now.” You can make your checks payable to any truth you want to believe these days.

The amusingly titled “Don Knotts in a Wind Tunnel” is possibly the most fantastic rager on the record, and maybe it seems that way to me because it’s the one I’ve heard the least. It’s as tongue in cheek as it is a pointed attack and has such a broad reach it could be about anyone, but Pfeffer makes it feel like it’s directed at someone specifically. Early on in the song, the theme becomes “I don’t hate the world, I hate humanity,” which is not a difficult concept to understand lately, with the world being such a “fucked-up place.” This is actually too vicious to be amusing.

You wouldn’t expect the album to finish with a nod to Tom Waits, but that’s exactly what they do with “White Jesus.” Though the guitars explode from time to time, especially at the end, this could have been an outtake from Bone Machine. It’s a complete attack on the hypocrisy of American Christians, urging them, “Don’t waste your life in a fantasy, God quit his job today, he wants to watch the world filled with flames.” It’s the perfect ending.

Now that we have an actual playboy manbaby as our president, the emergence of Playboy Manbaby as a musical force is more necessary than ever. Be sure to celebrate the release of this record on Lollipop Records (US) and Dirty Water Records (UK) at the Trunk Space on February 25, and pick up a copy of this landmark release.