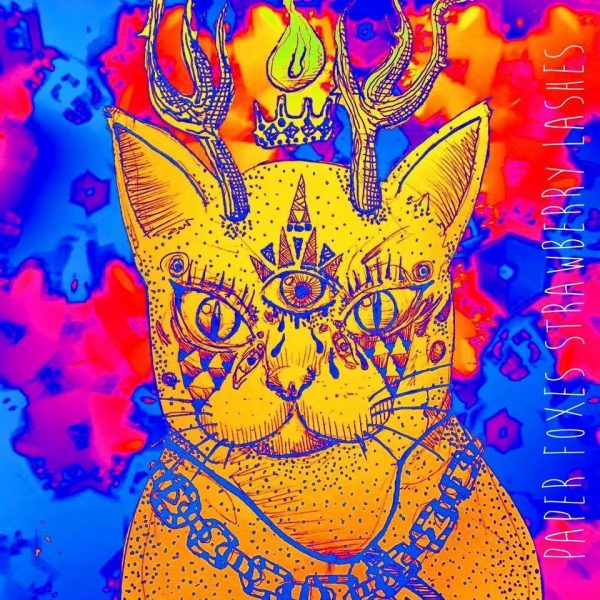 Since the release of their debut album, Paper Foxes’ lineup has changed completely, and they have become an incredibly tight outfit and one of the most solid live bands in town. Frontman CJ Jacobson and keyboard wizard Patro Gaston (Zodiac Bash) are joined by Uche and Jahlani Ujania on bass and drums on their sophomore effort, Strawberry Lashes.

The record is far more aggressive than their debut, and darker as well. There is no finer example of this than the opener, “Nightmares,” which pays homage to Interpol and Joy Division and indeed the whole of Goth, new wave and post punk. Jacobson has one of the most distinct voices in the indie scene, and it has become the centerpiece of their sound. “Indica” maintains the fast, steady guitars and pounding drums, with more than a hint of Peter Murphy/Bauhaus in this mix. Gaston’s synths absolutely make this song shine and come alive.

The cleverly titled “LSDaydream” gets into Love & Rockets’ territory in the introduction. At this point in the record, I was convinced that Paper Foxes had time-travelled to the 1980s to write these songs. It’s a swirling psychedelic fantasy of a number, with a tinge of darkness around the edges that becomes more and more trippy as it goes on. “Strawberry Lashes” is the finale of this all-too-short taste of Paper Foxes 2016, exploding with synths, guitars and rhythms that evoke Devo, Gang of Four and other post-punk outfits with that angular guitar sound. It’s a neurotically paced number filled with anxious chords, sounding exactly like an obscure band called Kitchens of Distinction from the early ’90s. I’m not sure if they’ve ever even heard of them, but they nail that sound with authenticity.