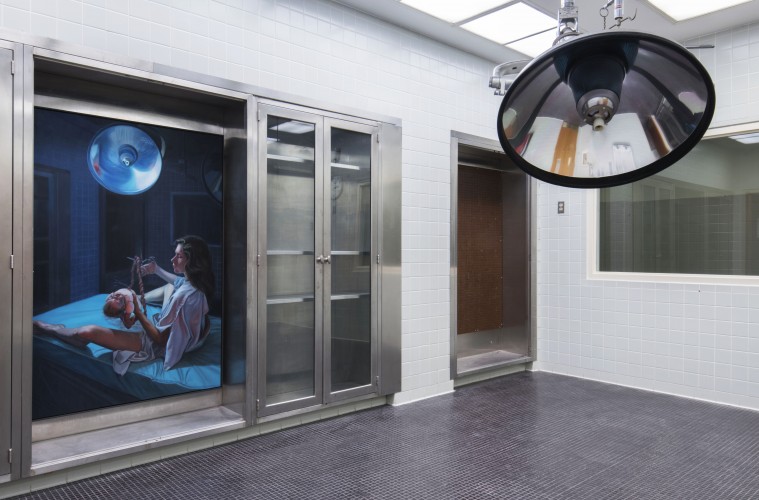 As part of an ongoing dialogue called Creative Push, connecting visual and immersive art works with women’s personal experiences of birth and delivery, Arizona State University Assistant Professor of Art Forrest Solis melds her paintings with a collection of recordings of women sharing their individual experiences of trauma and the trials and tribulations of the delivery of their children. The “L+D” show, now on view ASU’s extended campus site at 200 E. Curry Road in Tempe (second floor), is fittingly installed in what used to be the children’s ward of a former hospital.

“Since it is about memory, it’s a kind of bridge between reality and the unreal,” Solis explains. “So there is a doll with a real umbilical cord and a mannequin with a real vagina. It’s this kind of play between real and unreal.”

Solis says that during the actual process of birth, a woman may feel completely isolated in her experience, even if she’s come very prepared, communicates with her doctor and has a good support network. “In many ways, your body is totally treated like an object,” she says. 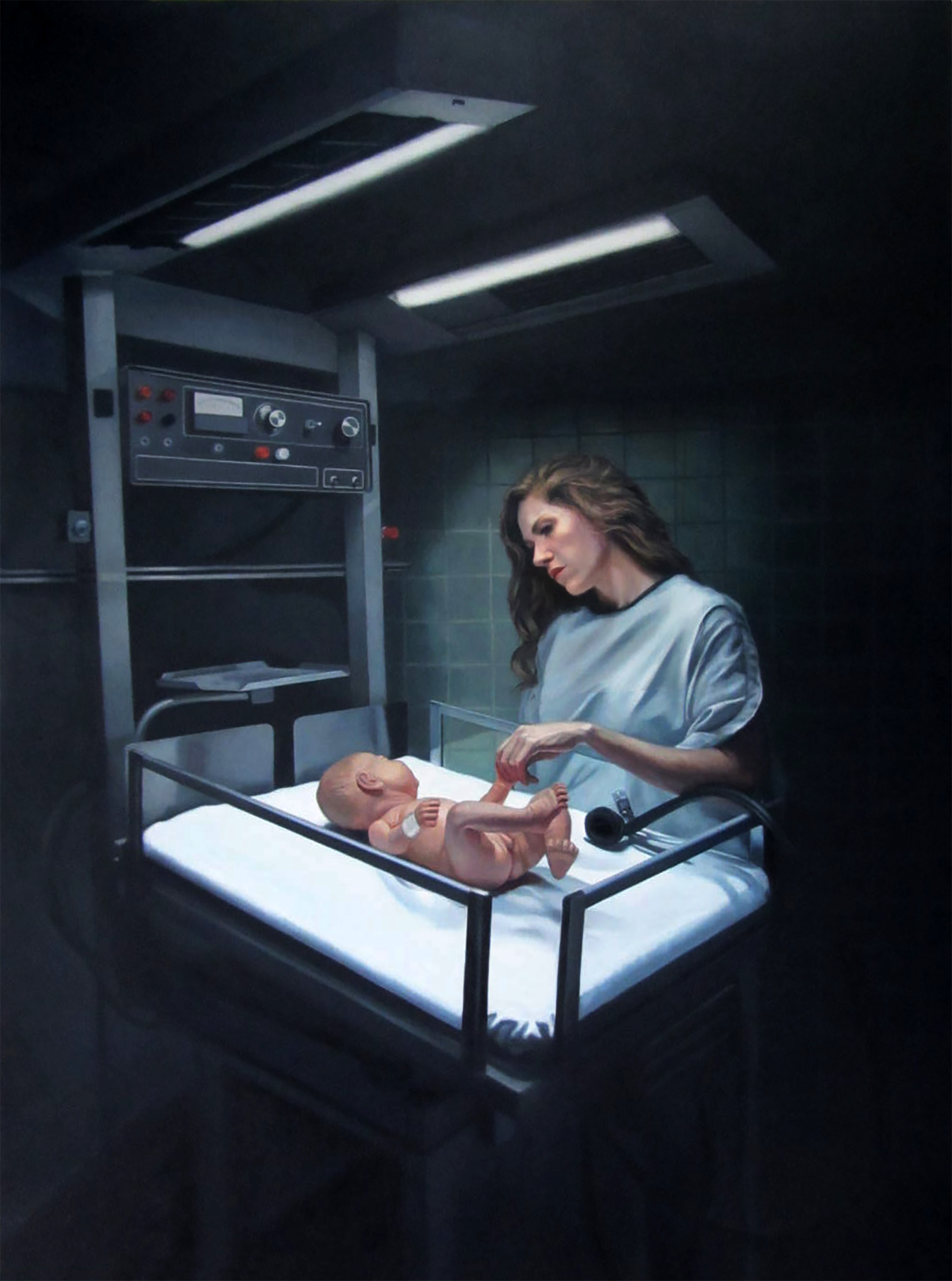 Within the walk-through exhibit, Solis’s paintings express some of the feelings of being objectified. Real women—mothers—share true audio accounts of their personal experiences. Solis has paired her visuals with some of the more gruesome, startling, disappointing and fragmenting experiences of the women she’s interviewed for “Creative Push.”

When visitors enter the second-floor hospital ward, they are met by ambient sounds in the hallway: the hurried hum of the hospital. People seem to rush and buzz from within; a sense of urgency is suddenly piqued. One of the first items of hospital ephemera to greet the visitor is a blue wheelchair; something Solis says is ubiquitous for almost every new mother’s experience.

The venue buzzes with overhead fluorescent lights and echoes, a den of sterility with tiled walls. Just beyond the flapping double-hinged doors, inside the surgical wing, one of Solis’s new paintings shows a woman (self-portrait) in a hospital gown with a river of blood trailing from between her legs. Solis says that this image was based on her own experience. After giving birth to her son, she rose from her bed and someone in the room nonchalantly mentioned that she was bleeding. “It was like someone had taken a bucket of blood and just thrown it on the ground,” she says.

In the first surgical room of the installation, Solis tells her own story of birth and the unexpected feelings of detachment from her body. In the room is another self-portrait, a painting of the soon-to-be mother reaching around her own spine to self-administer an epidural.

Another painting at the end of a hallway shows a fragmented marionette-like doll, her legs splayed all over the table, receiving stitches in her vagina from a female doctor (an episiotomy, which is a fairly routine practice for Western births). “This is as close as I think you will come to ‘getting it’ in this sort of subversive environment,” Solis says of the highly immersive show and deeply personal physical experience of birth.

In another room, well-hidden speakers play the story of a woman’s negative hospital birth in the 1970s. The room is decorated with prop books on gynecology and obstetrics published by Harper and Row. 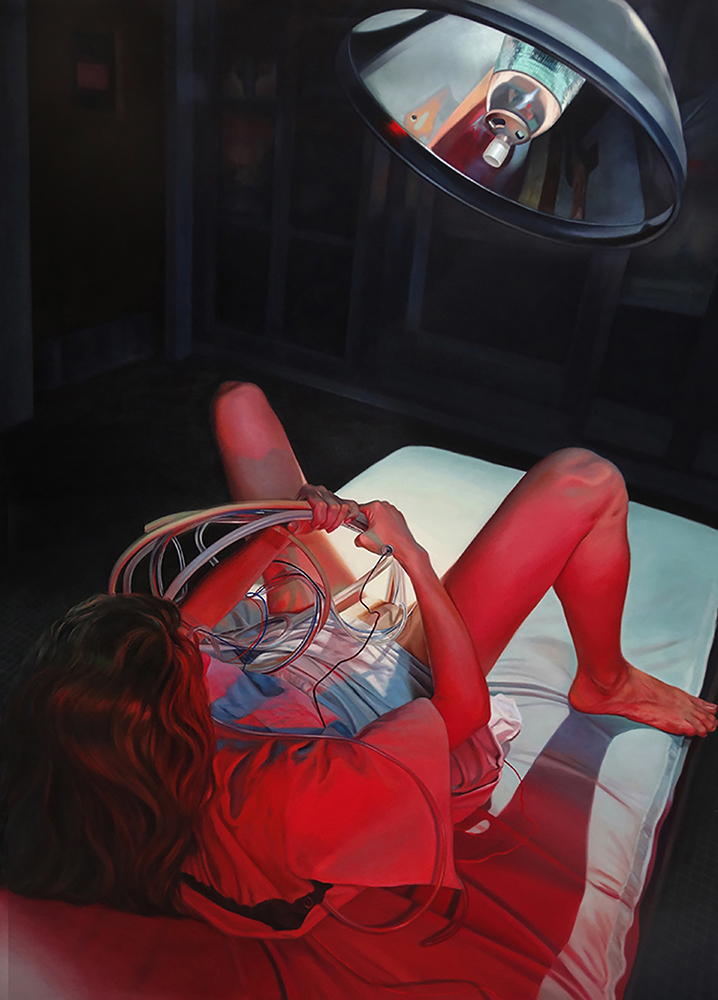 In different room, a woman cries: “I don’t care—cut me open!” She describes the unspoken responses she could read on her doctor and nurses’ faces. “No one can help you. You have to push this baby out!”

A woman explains that she and her husband had planned to avoid any drugs during delivery, for the safety of the baby. But she began to change her mind when the real pain and all the pushing came to her. She finally said “yes” to an epidural after a nurse assured and empowered her that the birth was HER experience. Her husband was so furious with her decision that he rushed out of the room.

Another small room that almost looks like a closet holds an incubator with a painting of baby in it, with audio of woman’s story about giving her baby up for adoption. “I failed her,” she cries. But then, almost in the same breath, she states: “I did the best thing for her.”

Two locker rooms on the ward contain no paintings but tell stories of loss—one woman’s child appeared to the world dead at delivery, and another woman learned that she had life-threatening cists on her ovary after a lengthy, extremely painful miscarriage.

This show isn’t about pink ribbons, teddy bears, fluffy pillows and cozy housecoats. “Creative Push: L+D” pulls the blue curtain back and reveals the true pain, discomfort and anguish of childbirth in a very matter-of-fact style, with empathy toward the women who shared their stories.

Originally slated to be on view from April 1-April 15, “Creative Push: L+D, a Solo Exhibition/Installation by Forrest Solis,” has been extended through April 29, at the ASU Community Services building, 200 E. Curry Road, Tempe (second floor). For more information, visit https://www.facebook.com/events/773349699465433/ or https://asuevents.asu.edu/content/creative-push.