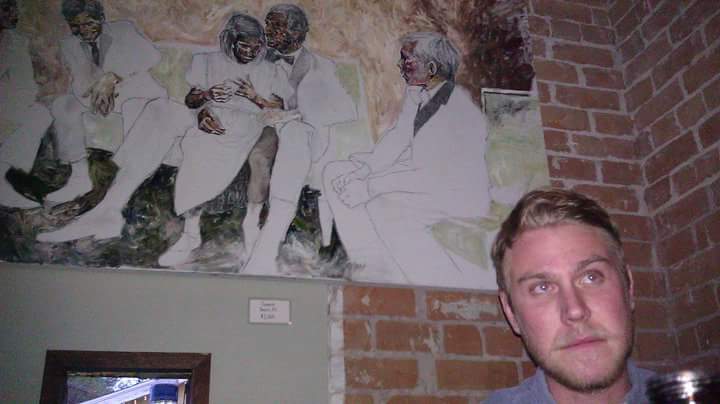 After Controversial Gallery Closing, Kasper Gets Another Chance in Bisbee 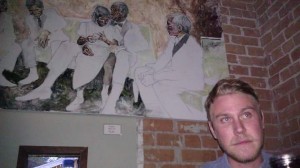 After several weeks of social media buzz, a handful of local write-ups and a national wire story circulated by the Associated Press, the Phoenix artist whose show of paintings was shut down in Bisbee after a few community members complained will get another chance to display his art at a nearby gallery.

After the buzz about requests from the landlord and Bisbee residents to remove Kasper’s art deemed “pornographic” by some, the show’s curator, Meggen Connolley, was contacted by a few other Bisbee galleries who sympathized.

Sam Woolcott and Poe Dismuke, owners of Sam Poe Gallery, invited Connolley to co-curate Kasper and McNeeley’s show, moving it to their space. “We thought it was the most appropriate place to show the art,” Connolley says.

According to the curators, Kasper’s work is quite different from the gallery’s usual work which often includes abstraction and mechanical sculpture made of found objects.

But the gallery owners were intrigued with the story behind the show and felt strongly that the work should still have a place for discussion and analysis.

“Whether you understand what he’s doing or not, it’s not up to just a couple of people to say it can’t be seen,” SamPoe Gallery co-owner, Woolcott, says. “The artist had something in mind, and he expressed it in his way. As a painter, it’s a very interesting painting… People should be able to make their own decisions and decide their interest in it.”

“The show sort of came and went so quickly, I never even got a chance to see it. A lot of other people also hadn’t,” she says.

“We couldn’t understand the conflict about it. We are proud to host it and have people come to see the work.”

Woolcott says that while she and her gallery partner, Dismuke, usually show their own work, they have had group shows and guest artists in the past, but they are pretty selective.

Since Connolley and her partner closed up the Windows Gallery and moved out, another art seller has adopted their window, Woolcott says. The owner of Vincente Gallery, 55 Main Street, will host an art opening the same night as Kasper and McNeeley’s show reopens. And, according to Woolcott, the new show opening has a theme of male nudes and will feature live nude models. She is interested to see how the community responds.

“We think it’s quite a hoot. We just think it’s so ironic that there was this carfuffle that there were some little suggestions in paint, and people went full tilt over it,” she says.

Woolcott says she and Poe Dismuke have operated SamPoe Gallery for eight years. She says they have a lot of support in Bisbee and local collectors, and she’s is not too worried about any backlash or negative feedback about the show.

“I’m happy with whatever response I get. But I do hope it’s positive!” Kasper says.

Kasper plans to have another show in the Phoenix area soon, possibly in the late summer, he says.