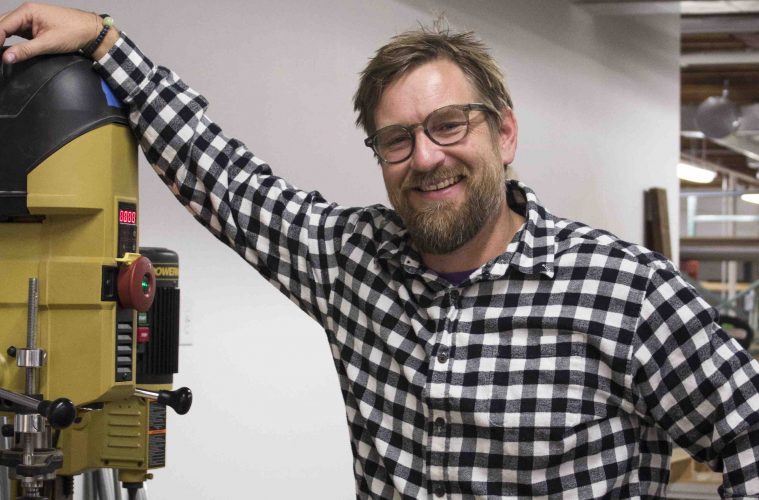 Matthew Moore’s UP Furniture: A Grain Runs Through It 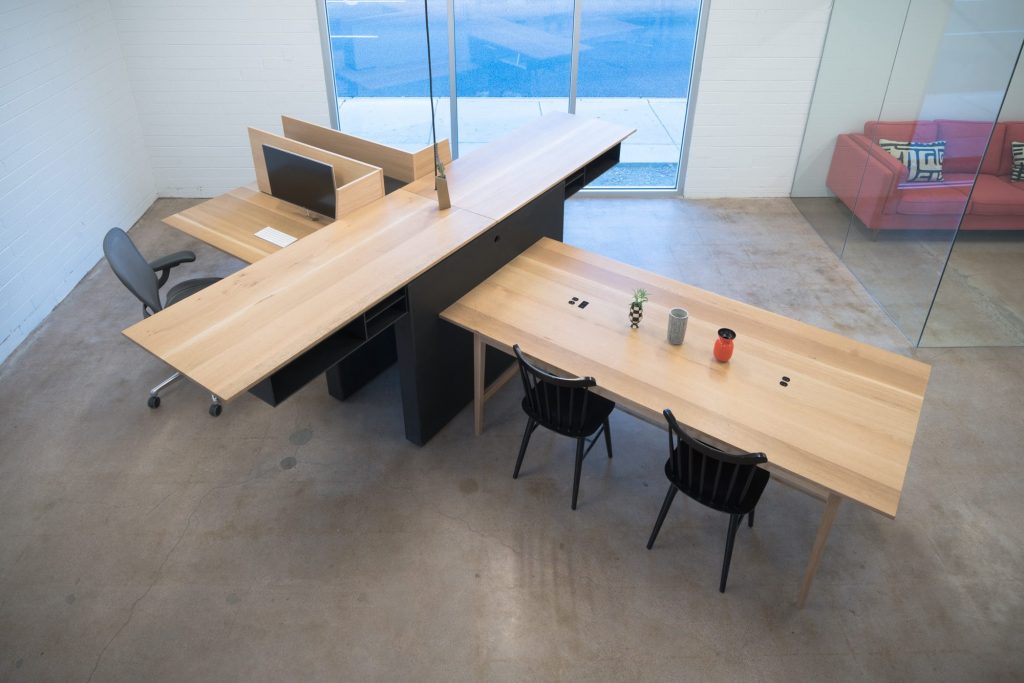 8.56 hours. That’s the length of the average shift for fulltime workers in the United States, according to the 2016 American Time Use Survey put out by the Bureau of Labor Statistics. For many, that’s 8.56 hours spent hunched over a desk in a cubicle under fluorescent lights.

Science is finally catching up to what workers knew anecdotally for years: such conditions are slowly killing us. Elevated rates of cardiovascular disease, diabetes and chronic back pain are just a few of the risks that habitually sitting for extended periods of time can lead to. And we haven’t even touched on the psychological impact.

But there are those who are trying to change these conditions, to make workplaces better designed for human beings. Matthew Moore and his company, Urban Plough Furniture (UP Furniture for short), are part of this movement.

“Design and beauty are sustenance for people,” Moore told me. His route to becoming an entrepreneur and starting UP Furniture was somewhat unconventional. When he first went to college, he was studying agricultural economics.

“I couldn’t stay awake in econ,” Moore recalled with a somewhat sheepish laugh. “I’d actually record the lectures, because I knew I was going to fall asleep, and then I’d fall asleep listening to the recordings of the lectures.” 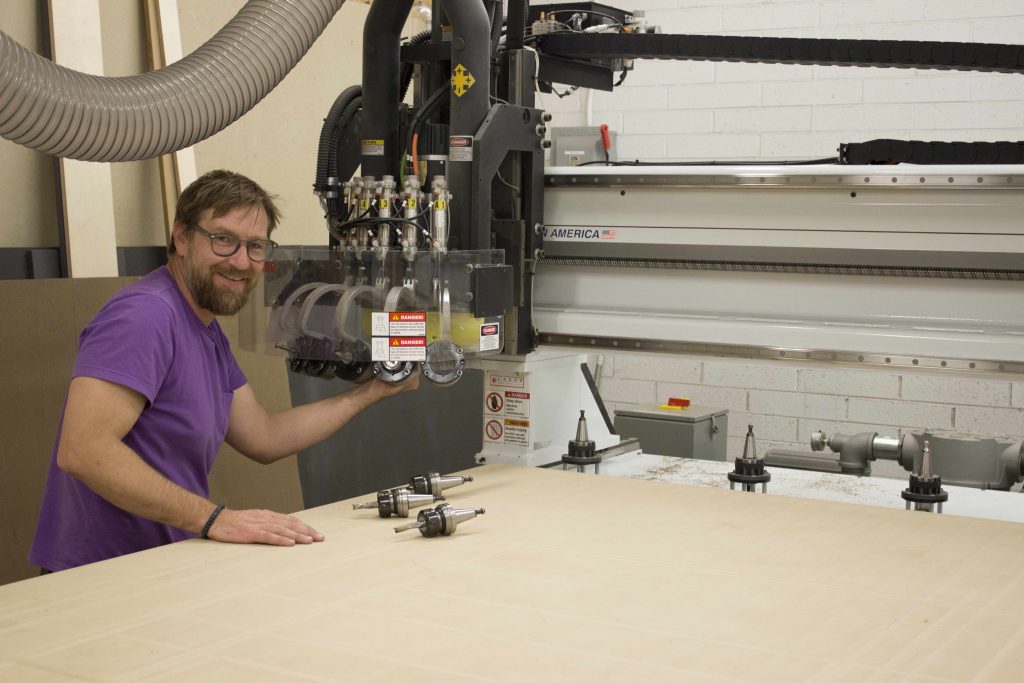 Clearly, the dismal science was not for him. Then Moore discovered his true passion. “I ended up finding art history,” he said. “And I fell in love with making artwork. I graduated and I thought, ‘I’m going back.’ But my dad said, ‘There’s nothing you can learn in school that you can’t learn on this farm.’”

With a BFA in Art History and Sculpture from San Francisco State University under his belt, Moore did just that, returning to work the family farm in Surprise, becoming the fourth generation to do so. His father’s advice proved somewhat prophetic, because Moore’s time on the farm ended up teaching him about art and business.

“There’s a process in agriculture that really deals with the hand and craftsmanship,” Moore said. “It displaces you from control, in a way. You have to be passive because you don’t know if there’s going to be a storm, or if a bunch of bugs are going to take over. You grow up underneath that and it gives you this agency to dream. It sounds weird, but there is a freedom in the lack of control, that moment where you can ask questions. I feel that’s why I excelled at art.”

As the Phoenix metropolis grew, becoming the fifth largest in the United States, the unstoppable march of suburbia came knocking on the farm’s door. “A lot of that encroachment pressure started to happen,” Moore said. “Then, all of a sudden, that whole career of being an artist made sense again, so I started to tell the story of the family as a generational farming operation.” 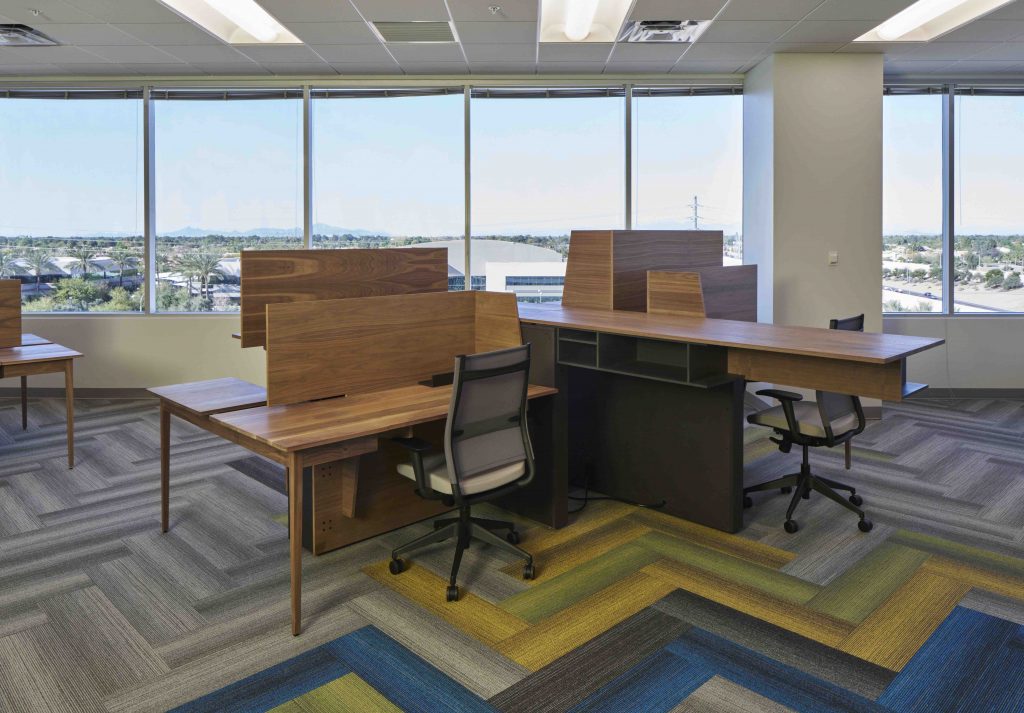 When his grandfather sold off the first piece of the farm in response to these pressures, Moore was upset. This inspired a unique artwork titled “Rotations: Moore Estates,” a one-third scale model of the planned subdivision, envisioned using crops. Moore utilized 35 acres of land as his canvas and plants as his medium. Black-bearded wheat represented the roads, and sorghum depicted the houses (mimicking ubiquitous red-tile roofs), so the aerial view would appear as a typical subdivision.

After the financial downturn of the last decade, Moore began a work titled “And the Land Grew Still.” Spare but sprawling, the large installation piece was composed of a number of elements: the scaled-up wooden frame of a tract house that appeared to be sinking, embossed scrolls that patrons were encouraged to run their fingers over and thus “ink” the letters and walls featuring intricate relief patterns, many integrating maps. Occupying a bottom-floor space at the Phoenix Art Museum, many of the works appeared to be blank white walls until you looked closer.

This project proved seminal for UP Furniture. It was during this time that Moore began collaborating with Claes Bergman, a Swedish artist and craftsman who now works for UP, along with architect Aaron Forbes, another collaborator. To construct the debossed panels for the art installation, Moore used a huge CNC mill, the same kind that UP now employs to carve and shape pieces for the company’s line of desks and other furniture. On a more conceptual level, the project gave Moore and the burgeoning team a taste for designing and thinking about big spaces and how people interact with them.

The project, with its minute detail that at first was almost invisible, was intended to slow down viewers, to force them to contemplate and observe. “The museum is amazing, but you create this show, and then a month or two later, it shuts down,” Moore said. “Building spaces that people can enjoy long term led us to ask, ‘How do you get into that?’ There’s a public art route, and we certainly do that, but it really came down to thinking about creating an artist-led business that functions well within the Western worldview of commerce.” 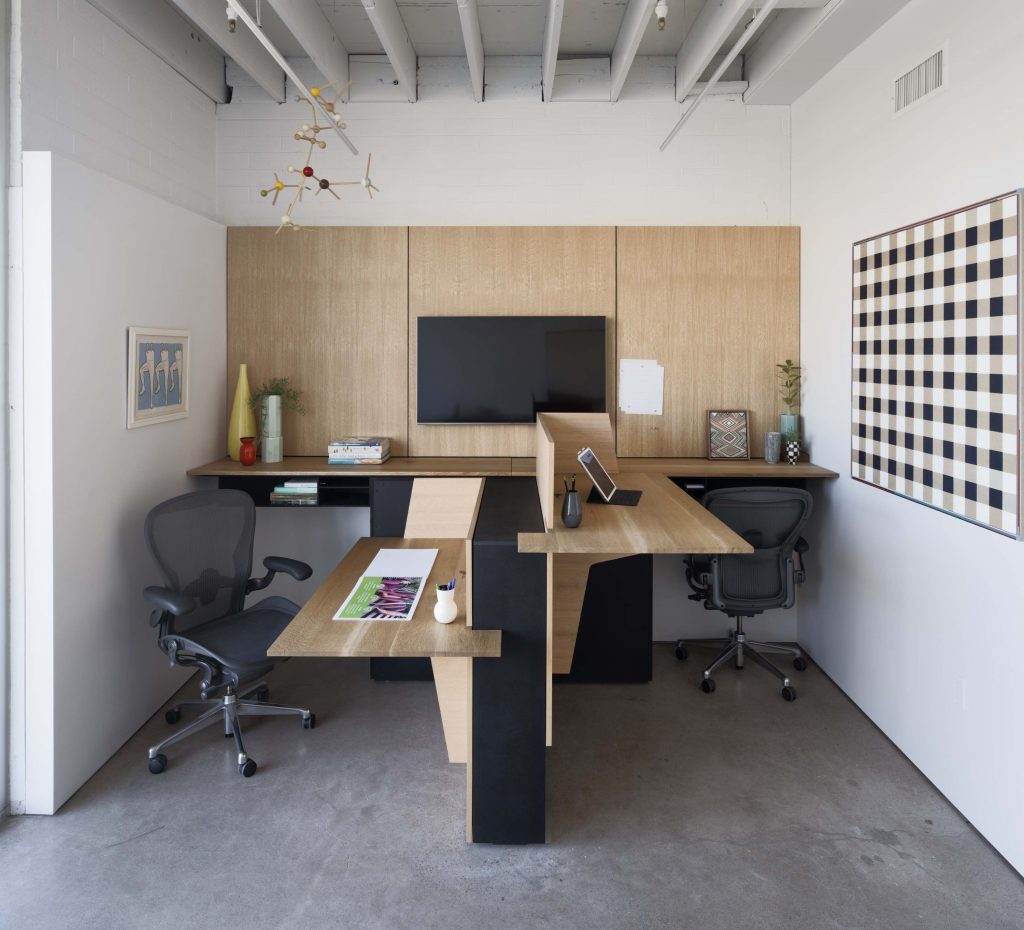 Moore wanted to take his art out of galleries and museums and integrate it into the environments people interact with on a daily basis. The next big step toward the creation of UP Furniture was a project Moore and his team did for The Department, a co-working space in downtown Phoenix.

“I was in there renting space, and then the management started to ask me, ‘What would you do with this lobby that’s not a lobby, what would you put in here?’” Moore said. “We started doing almost art installations to convert the idea of the space, but really what we were doing was designing and building interiors.

“Then we got to what is called the F, F and E – furniture, fixtures and equipment. We went around and looked at all this office furniture, and I was like, ‘This is so expensive.’ The quality was all over the map. I was just scratching my head thinking, ‘We can build a better office than this,’ and so we did.

“We built a really beautiful space. It was right at that moment that these same guys were like, ‘Man, you should really think about making a business around furniture and architecture.’ So I gathered a motley crew of individuals that I’ve been working with for the last 10 years on art installations, and we created Urban Plow and Urban Plow Furniture.”

Part of this project involved the construction of a number of sit/stand desks, one of the hotter trends in ergonomics today, which have become popular as people are more conscious of the deleterious heath impacts of sitting for prolonged periods. “If there’s one thing you can quote me on, it’s that most sit/stand desks are ugly,” Moore said as he showed me some of the more ghastly models on the market. “There’s one paradigm: two legs and then you switch out the top. It doesn’t matter if it’s a plastic laminate top or a live-edge wood thing. It’s got those two legs and that’s it.”

With the combined artistic, design and building experience of its team, UP Furniture brainstormed options until they developed a proprietary design, which they are currently in the process of patenting. Its seemingly simple appearance belies the sophisticated design. With the push of a button, the desk elevates itself in near silence. Cords and plugs are routed through accessible yet concealed compartments, which means the desk can be raised and lowered with ease. 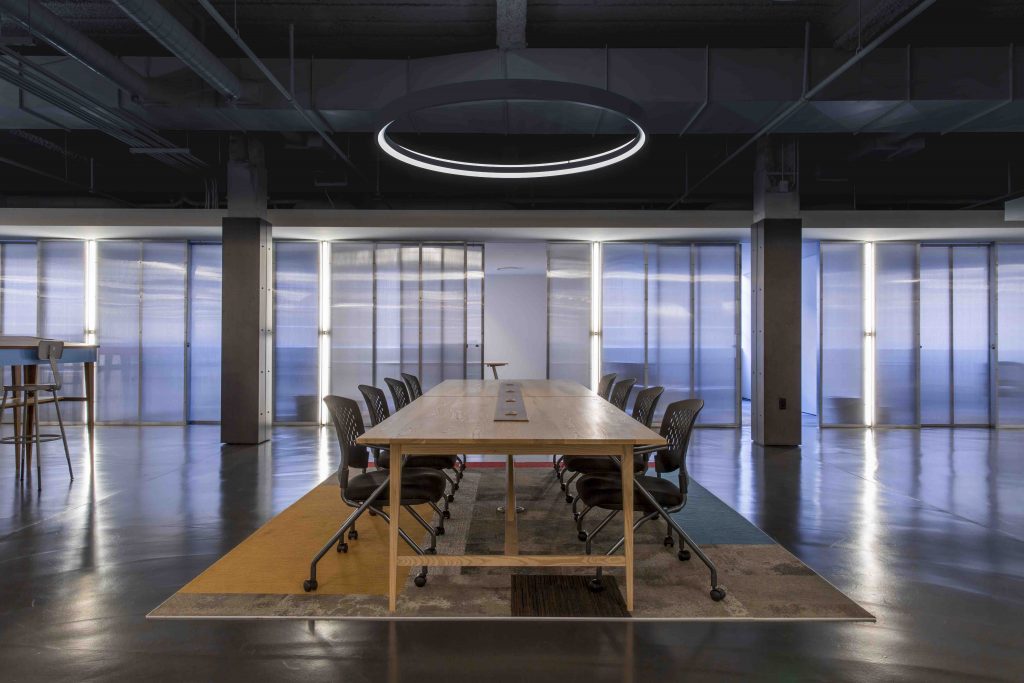 “This adjustable-height idea really checked a lot of boxes in terms of health and well-being that hadn’t been solved yet,” Moore said. “We created these legless sit/stand units.” Inventing a better desk was only half of the problem. “We’re a year and a half deep right now and still just figuring out how we can scale this,” Moore said. “We don’t want to be an expensive boutique shop that is not accessible, so we’re working to make it competitive and talking with wholesalers who can bring it to market.”

With so many workers nervously eyeing a future that may or may not have a place for them, startups like UP Furniture are one part of the answer. This is something Moore is quite cognizant of. “How do you give people meaningful jobs and salaries and build a generational business, much like farming? You have to really think outside the box and figure out how you’re going to scale this,” said Moore. “This company wasn’t started to do custom one-off furniture, because with that model, you’re operating more like an artist.”

“As a farmer, I’m always thinking, ‘What does the soil want?’ What can I do so that when my kids are grown, it will still be cultivated? The same goes for building a business. Knowing that the office is a place where people spend half their lives, if you can have an impact through beauty and design – much like art, but in the office arena – then you’re winning,” said Moore.

While office layout and desk design may not be the sexiest topics, until Jeff Bezos or some equally creepy tech billionaire replaces us all with robots, we’ll continue slogging for 8.56 hours a day, five days a week. In terms of daily impact, perhaps a better mousetrap can make for a less oppressive rat race. 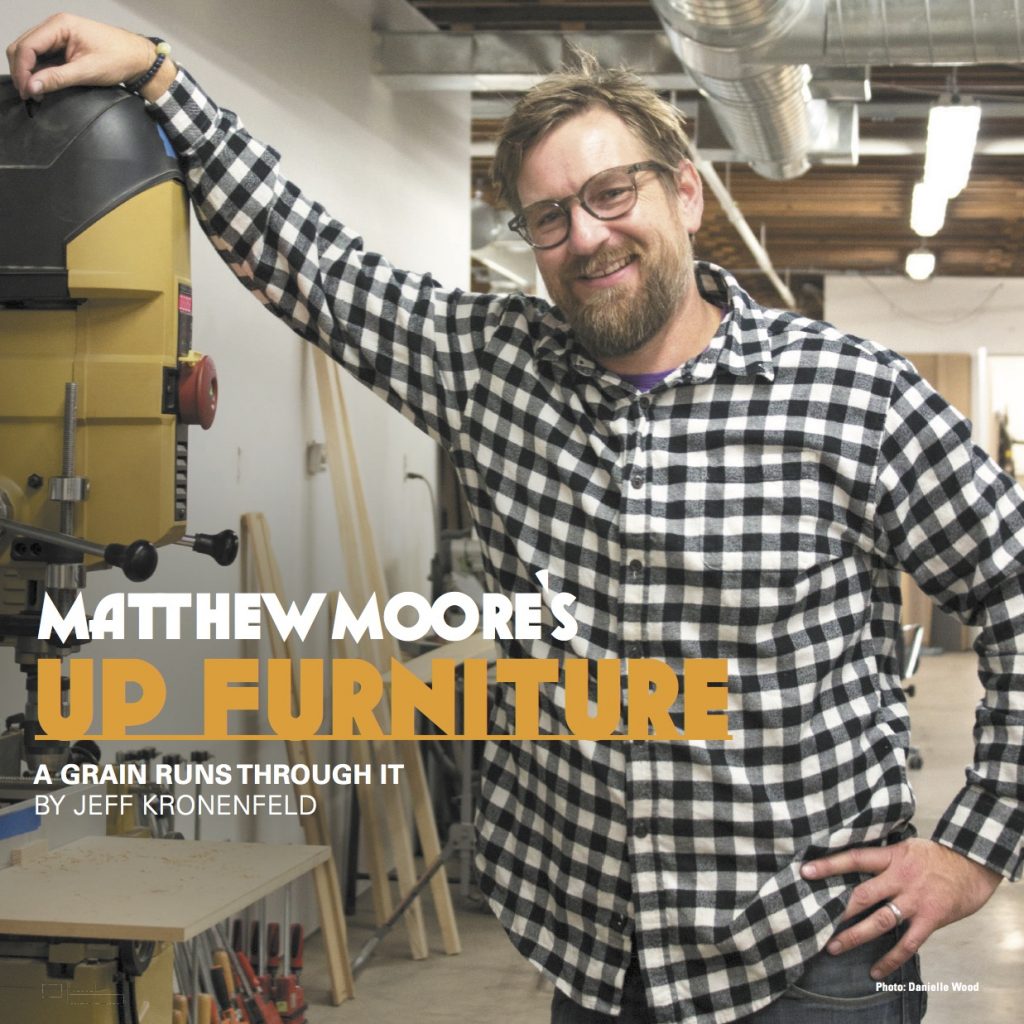