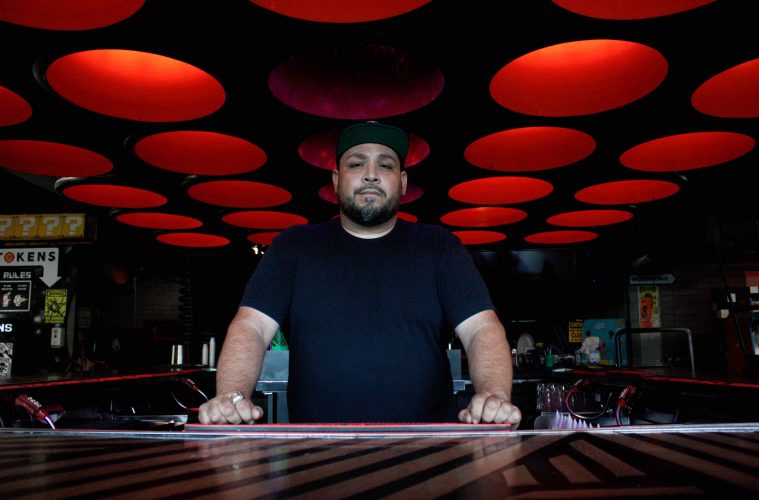 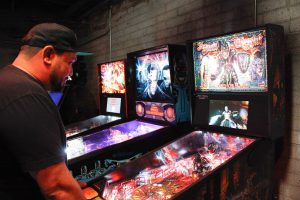 When Ariel “Ari” Bracamonte was growing up in Glendale, he used to roll with his three brothers to the
local convenience store to peek over the shoulders of kids richer in quarters as they played arcade
games. The converging neon vectors of Tempest – still one of his favorites – and the other games seemed almost like magic back then. Now, as the owner of more than 350 vintage arcade games and co-owner of Cobra Arcade Bar, with locations in Phoenix and Tucson, he knows exactly what makes those old machines tick. Yet, when he sees a player’s eyes light up with glowing pixels as they’re transported back to their own childhood, he knows the magic is still alive. Later this summer, the magic will grow brighter when he and his partners open Ziggy’s Pizza and Stardust Pinbar – as in pinball bar.

Before Bracamonte was Arizona’s impresario of electronic entertainment, he was a local kid with a dream. He wanted to create a space where all his passions could live together under one roof: 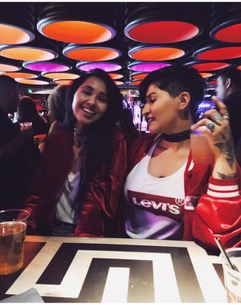 community, street art and, of course, vintage arcade games. He began collecting the fridge-sized machines, starting with an old version of Pacman. Having worked in autobody repair and painting from a young age, Bracamonte already had experience problem solving and fixing things, skills necessary when repairing and servicing machines 30 or more years old. Popping open his first one, he was surprised and fascinated by how simple they were. “It’s a TV, a board, and a power supply,” he explained. “That’s pretty much it.”

Bracamonte collected not only vintage classics but also obscure and rare games. Though newer models run LCD screens, he naturally gravitated to the older ones with cathode-ray tube screens, or CRTs. However, CRTs have largely been phased out of production. Bracamonte continues to collect and stockpile as many old units as he can find, having created a sort of arcade scrapyard where he can pull parts. 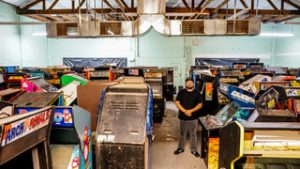 he said, a philosophical glint in his eye. “That’s what I think makes the game.”

As his knowledge and collection of machines grew, spilling into his backyard, Bracamonte decided to set out on a pilgrimage of bar-arcades across the US. Though now every city has at least one, and chains like Dave and Busters dot the suburbs, back then only a handful were sprinkled throughout the country. Using his connections in the street art community, he was able to find couches to crash on as he studied what bar-arcades in New York, Portland, and other cities were doing right and wrong. He noticed some places charged 50 cents a game, and some offered free play but made it up on drinks.

From his own gaming experience, he knew plays meant more when you had skin in the game, and so he 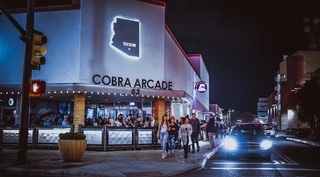 went with the token machines that were common before card readers took over arcades. He thought tokens held major nostalgia appeal, and he also realized the embedded marketing value of issuing your own coinage. “Off the jump, we used tokens,” he said. “I think we’ll have a million in circulation by the end of the year.”

Now with a clear idea and plan, Bracamonte struggled to find the right space, partners, and crew to make it happen. After several false starts, he eventually connected with developer, producer, and musician Chuckie Duff, who had recently acquired a property in downtown Phoenix that had originally been home to the local Chamber of Commerce. The first time he saw it, subdivided into offices filled with cubicles, Bracamonte had a hard time picturing what the space would be like occupied by arcade games and people dancing. However, Duff, known for his adaptive reuse projects, X-rayed through the cheesy ’70s interior to reveal a blank canvas on which they could paint their vision.

On the verge of giving up and going back to work at the body shop, Bracamonte was buoyed by Duff’s 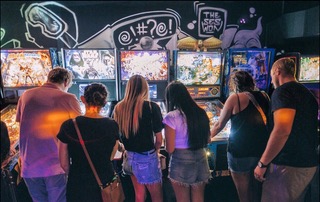 enthusiasm and faith. “Without him, there wouldn’t have been a Cobra,” Bracamonte said. Bringing on Genuine Concepts to manage the bar and Artie Vigil of AV3 Design Studio as the architect/interior designer, they assembled what Duff described as a dream team.

Years before Cobra opened, Bracamonte and his friends were already creating custom art on the sides of his game consoles and getting noticed for it. The art only added to the machines’ totemic status in a culture obsessed with nostalgia and youth. At the time, the decision to create new art on some machines rather than restore them was as much practical as it was inspired. Though now the market for vintage arcade games is fully mature, with its own conferences, networks, and companies selling large-format art reproductions to aid in the restoration of game cabinets – then, it was still an obscure niche fueled by a DIY spirit. Bracamonte put his skills as a painter to use, recalling with relish how he painted a Street Fighter 2 candy-apple red. In 2013, the Phoenix Art Museum invited Bracamonte and his friends to 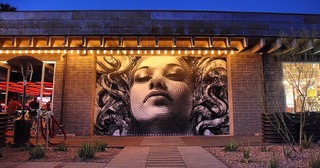 show their work as part of The Art of Video Games.The exhibit demonstrated gaming as a mature creative medium – one capable of bridging divides between semi-guerilla street artists and the institutionalized museum variety.

The incorporation of a street art aesthetic and ethos is something Bracamonte had always envisioned at the heart of Cobra. Vigil integrated Bracamonte’s ideas with a plan for the space that included other unique design concepts. For example, the illuminated tubing that extends down from the ceiling over the bar is a visual reference to the pipes from the Super Mario Brothers games. Bracamonte turned the bar itself into an art installation, by tapping into his extensive network of friends in the street art community. Bracamonte’s artist friends painted many of the machines in Cobra, as well as the interior, and they created the iconic murals on Cobra’s exterior. Local 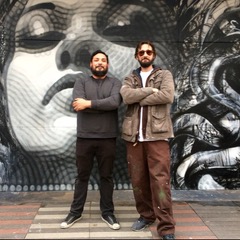 “Being in the arts district, I really utilize my friends that are artists and try to promote them as much as I can,” Bracamonte explained as he pointed to Cota’s work, currently on display at Cobra in Phoenix. “All the walls are black and white, so the games pop out. People say they’ve never been to a place like this, and I think that’s a good thing.”

Since Cobra opened in early 2016, the bar has become a breakout success, with boisterous crowds snaking down the block on weekends and supporting a small ecosystem of food trucks. In June of 2018, the partners opened a second location in Tucson. Described by Bracamonte as Cobra Phoenix’s “bigger, buffer, and better-looking brother,” it features arcade games, DJs, and dance floors, like the original Cobra. He also provides more than a dozen games to a bar in Flagstaff and every year participates in ZapCon, Arizona’s largest pinball and classic arcade game 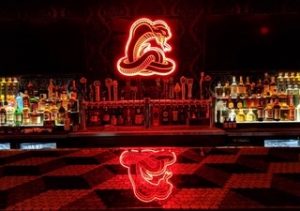 convention. Despite juggling all this, another pair of projects have been bubbling up in Bracamonte’s restive mind: Ziggy’s Pizza and Stardust Pinbar.

Though both Cobra locations feature pinball, this genre of arcade game has its own unique history and character. The first modern pinball-type machine was patented in 1871. The game has experienced a resurgence in popularity during recent years, with the International Flipper Pinball Association reporting a more than 100-fold increase in competition participation since 2006. Pinball machines also have distinctive economics compared to other arcade games. They are considerably more expensive to purchase, according to Bracamonte, and can actually appreciate in value over time, in addition to generating more revenue than most other games. Long wanting to create a distinctive pinball-centric spinoff to Cobra, when space next to The Van Buren became available, Bracamonte and his partners went for it, creating two separate but interconnected businesses set to open later this summer.

Ziggy’s Pizza will sell slices from 18-inch pies, with Greg Ziegler, co-founder of New York Pizza Department, developing the menu. Hidden behind a cooler door in Ziggy’s will be the “secret” entrance 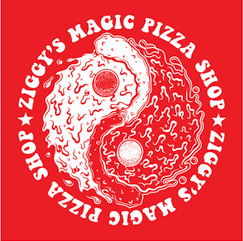 to Stardust Pinbar, which will feature a rotating selection of roughly 20 pinball machines, a light-up dance floor, and music from DJs. Ziggy is an abbreviation of Ziegler’s surname, but the names also reference David Bowie’s iconic fifth album, The Rise and Fall of Ziggy Stardust and the Spiders from Mars.

Inside, even the bar top shines, embedded with numerous chrome pinballs – the metallic spheres looking like “psychedelic spider-eyes,” in Bracamonte’s words.

“We really tried to take the inside up a notch in Stardust to make it feel like you’re not in Phoenix,” he said. “Like you’re not even in this world.”