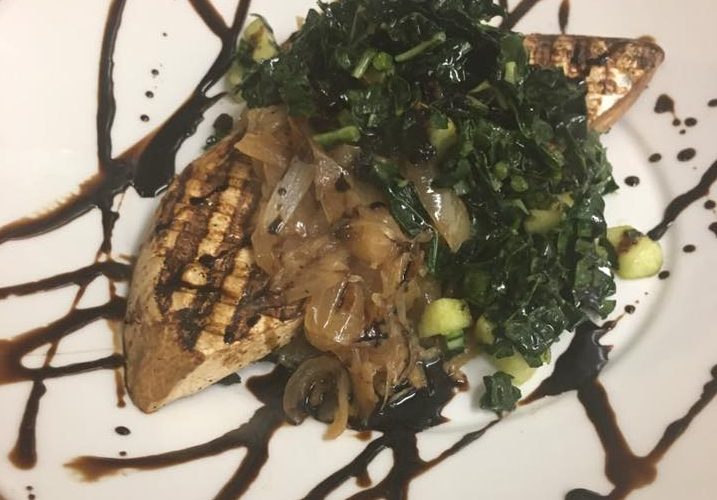 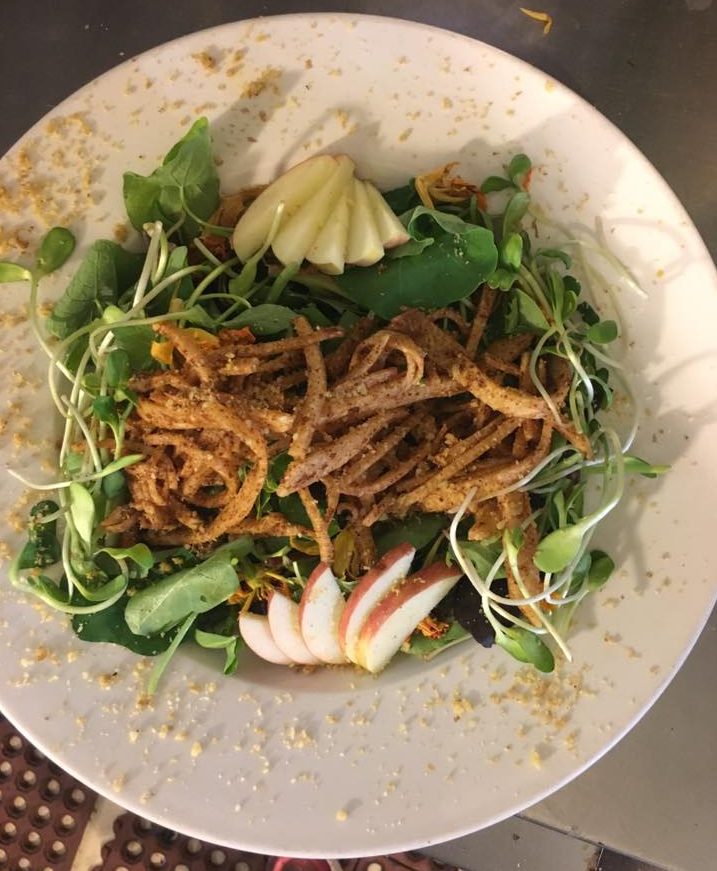 About a year ago, a new vendor appeared at the Uptown Farmers Market. I had no idea what they were selling, but when I saw their banner in my early morning, pre-caffeinated haze, my brain read their name as Wyld Stallyns, the intergalactic band made famous in Bill and Ted’s Excellent Adventure. Alas, no Keanu Reeves or air guitars were to be found in their charming booth: instead, it was an outpost of the Flagstaff vegan restaurant WHyld Ass. Since then, their stand has regularly stocked some of their greatest hits, including what have become two staples in my kitchen – carrot habanero hot sauce and sprouted grainy mustard.

They’ve recently expanded their vegan empire to include another brick-and-mortar location, nestled into a tiny spot just south of Camelback on 7th Street. WHyld Ass (I will never tire of saying their name) seeks to serve tasty food with a focus on health, without pretension or faux meat analogues. You won’t find any Impossible Burgers; no faux wings anywhere in sight. What you will find is very affordable, flavorful and healthy plant-based food, served with a touch of sass. 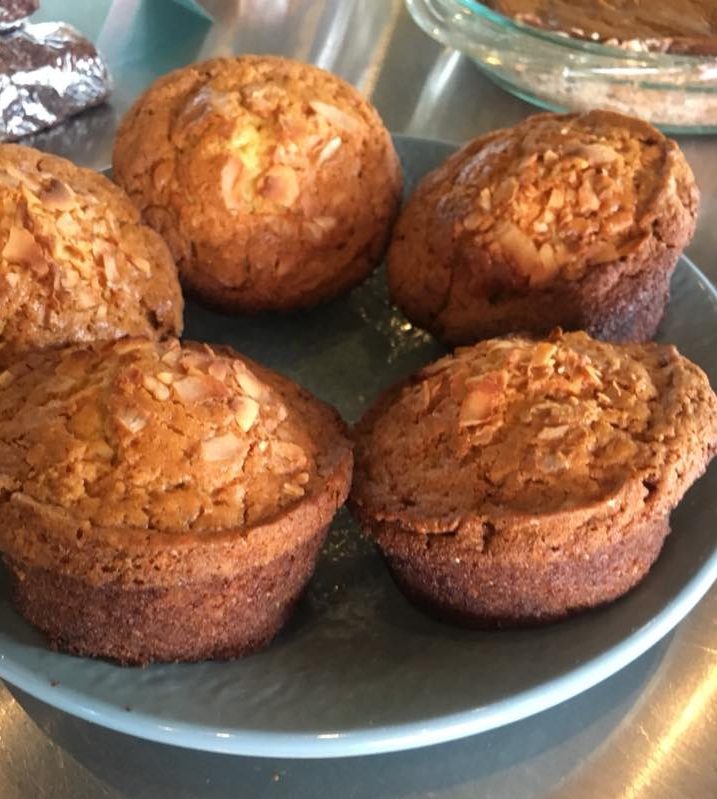 WHyld Ass packs about 10 tiny tables inside a cheery, well-lit box. Outside, you’ll find space for maybe another six people. This means it’s pretty easy to make a friend or at least overhear some interesting conversations around you. The pastry case always sports a couple of berry cobblers, their exceptional banana bread and my favorite – the Pepita Chocolate Brownie ($3.50). About the size of a dollar bill, this brownie is light, moist and pretty close to a cake. Whole pepitas are stirred in and scattered on the top. It’s incredibly tasty, and in a blind taste test, I wouldn’t have known this was vegan. I adored my huge slice of Maple Cinnamon Cake ($3.75), an explosion of fall flavors that I can’t wait to taste again. Expect a rotating selection of baked goods, with a nod toward the seasons.

Everyone is served chlorophyll water in lieu of tap or filtered water. Each visit, the mix was a bit different. On my first visit, it was so light that it made the glass appear slightly green. I preferred this version, since the taste was more umami-like. On my last visit, it was nearly the color of lime Kool-Aid. Still interestingly flavored, this version had a taste that was distinctly grassy. Not bad, but not my favorite. Evidently, chlorophyll is a powerful antioxidant. 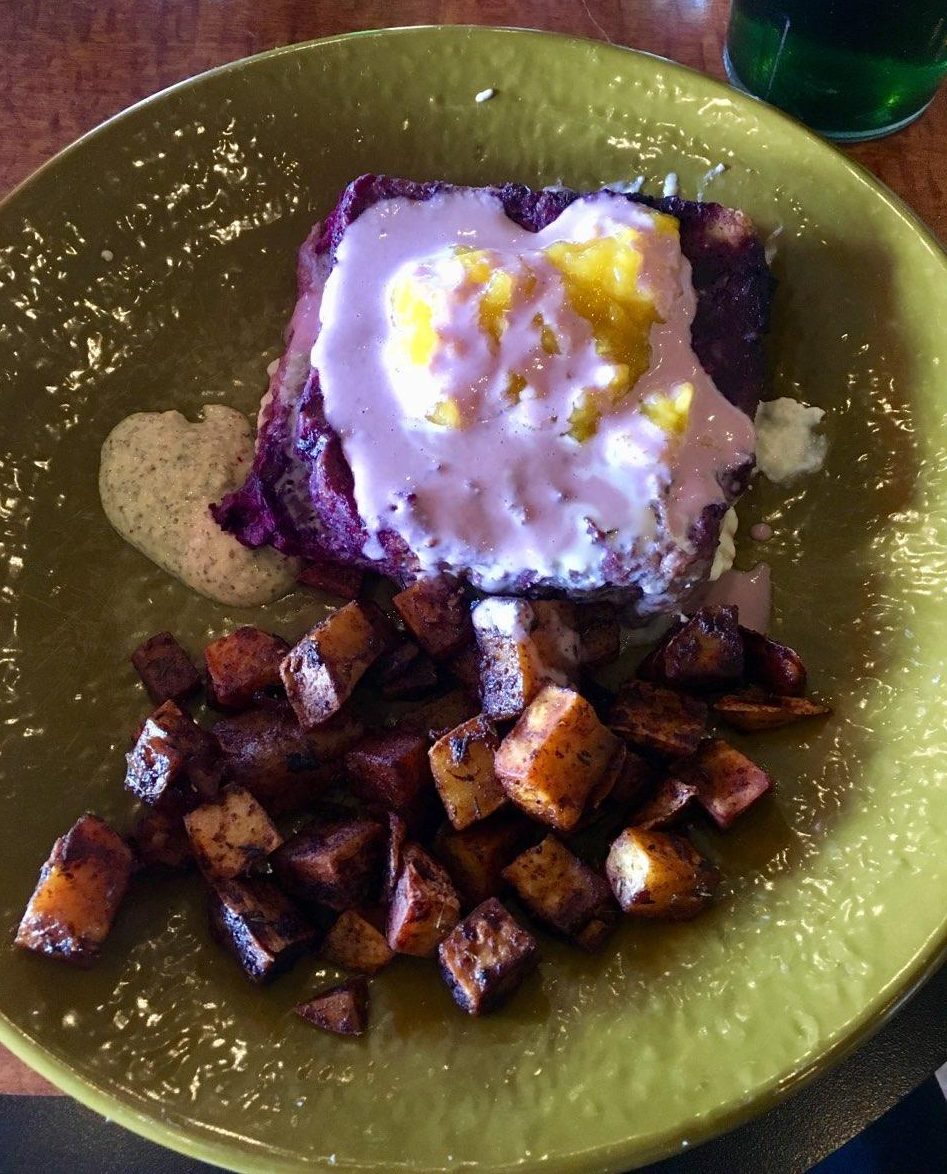 On a chalkboard, you’ll find the current flavors of kombucha listed. I absolutely adored the Watermelon ($3.50/small), which tastes like liquid Jolly Rancher, but slightly less sweet. For an extra 35 cents, go for the jalapeño upcharge. It cuts the sweet and is an interesting counterbalance.

Breakfast is a treat. Maybe one day I’ll try a coffee smoothie, but instead I opted for the Spicy Stabilizer ($6.50), a kicky mix of celery, cucumber, lemon and cayenne. Once their espresso machine is up, expect a litany of coffee drinks, but today drip coffee will suffice. I absolutely adored the Stuffed French Toast ($12): two slices of gluten-free bread loaded with Danish cashew cheese and smothered in berry compote. The sweet potato hash served alongside is crispy perfection, made even more perfect when dunked in a dollop of their house-made sprouted grainy mustard. Fair warning – this condiment packs a punch! 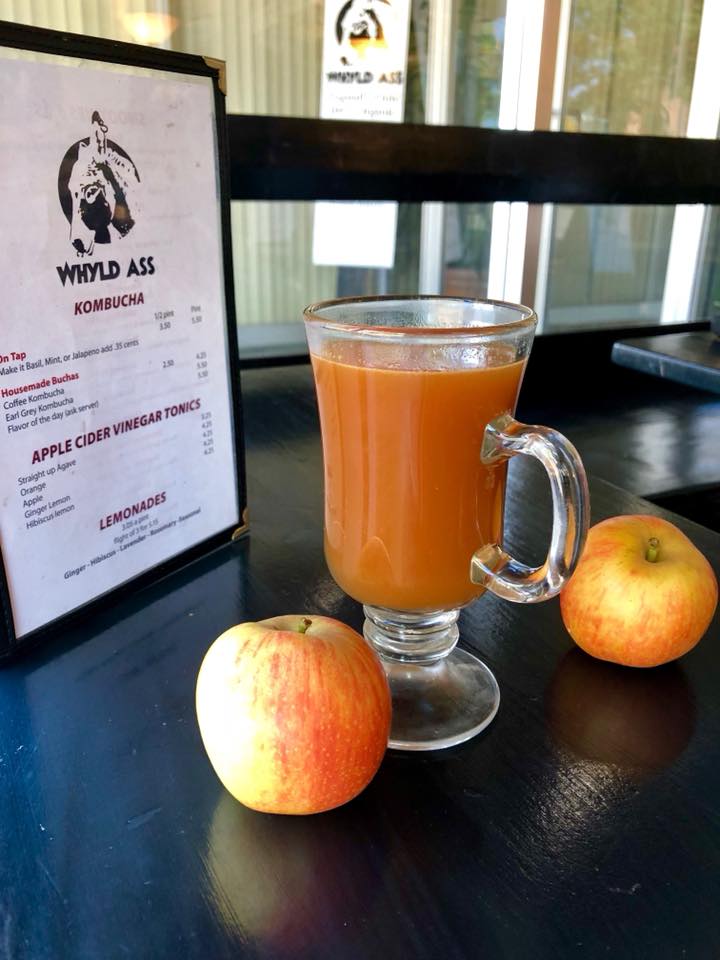 Everyone loved the Biscuits and Gravy ($8.50). A massive rosemary and orange biscuit is split and covered in black pepper chipotle gravy. It’s warming and hearty, and the smattering of Southern-inspired kale collard greens on top cuts fat like a knife.

For fun, we ordered the Zucchini Bacon ($3.50). While no one is going to mistake it for the real thing, it was salty, charming and delicious swirled into the sweet French toast and savory biscuits and gravy. I’d order it again – probably on their BLT next time.

Expect their early opening menu to be fluid. This week’s selections were mostly greatest hits from their Flagstaff location. That will expand as they get their bearings. However, no matter what is added, I don’t want to miss their Avo Melt ($11.50). A panini is loaded with their potato cheese (is it cheese? I’m not sure, but it is creamy and enjoyable), fresh avocado and black beans, and grilled until hot and crispy. The heat does something to the fat in the avocado, so when it’s delivered via bread, crunchy from the press, it’s just about perfect. The accompanying side salad is fresh and flavorful, topped with their kicky, herby and refreshing vinaigrette. 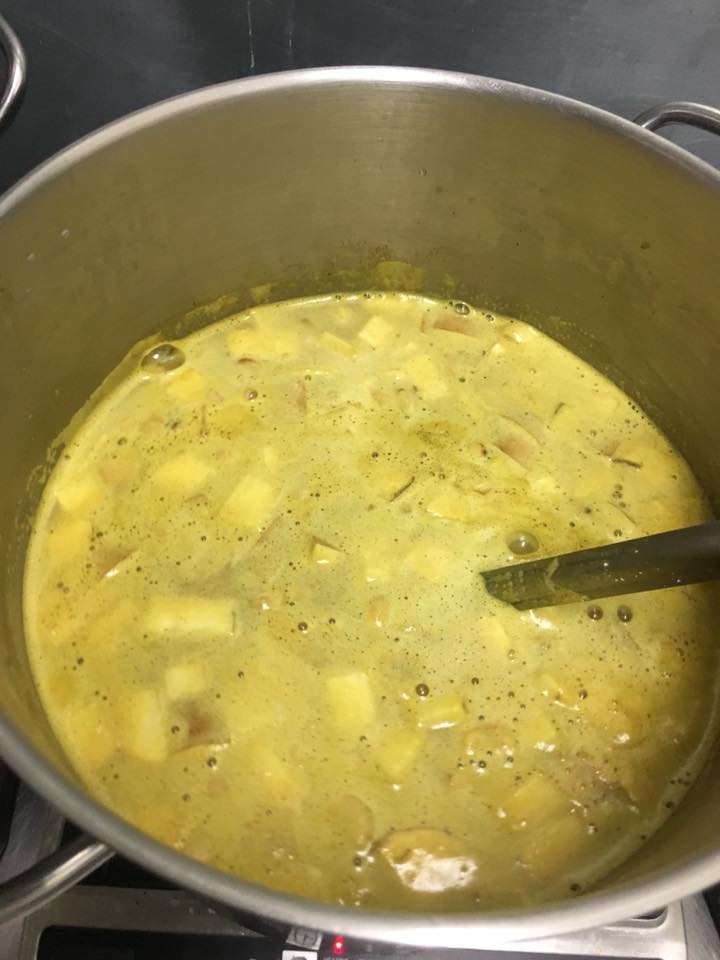 I also loved their Farmers Warm Veggie Salad ($11.00). I’m assuming this gets its name from the seasonal veggies they find in the markets. This time it was carrots, zucchini, mushrooms, onions and garlic, tossed with that kicky vinaigrette and served over a large mound of warm quinoa, which covers fistfuls of spring mix salad greens. It’s literally a plate of healthy goodness. While I wouldn’t call the walnut parmesan actual cheese, it does lend a salty, savory and creamy component that lifts the dish. Good for you isn’t always this good.

You’ll find their Superfood Guacamole all over the menu. Our new server wasn’t up to speed on all the ingredients that made it superfood, but we did detect chia seeds in the mix, adding a slightly crunchy element. We asked for just a scoop, which was precisely what we got – served neat, without any scooping mechanism, like chips. We didn’t miss them. We ate forkfuls of superfood guac until it was super gone. I love gauc, and this is a good one: minimal cilantro, lots of crunch from onions and tomato, and loads of lime juice. Superfood? Not sure. Super good? Absolutely. 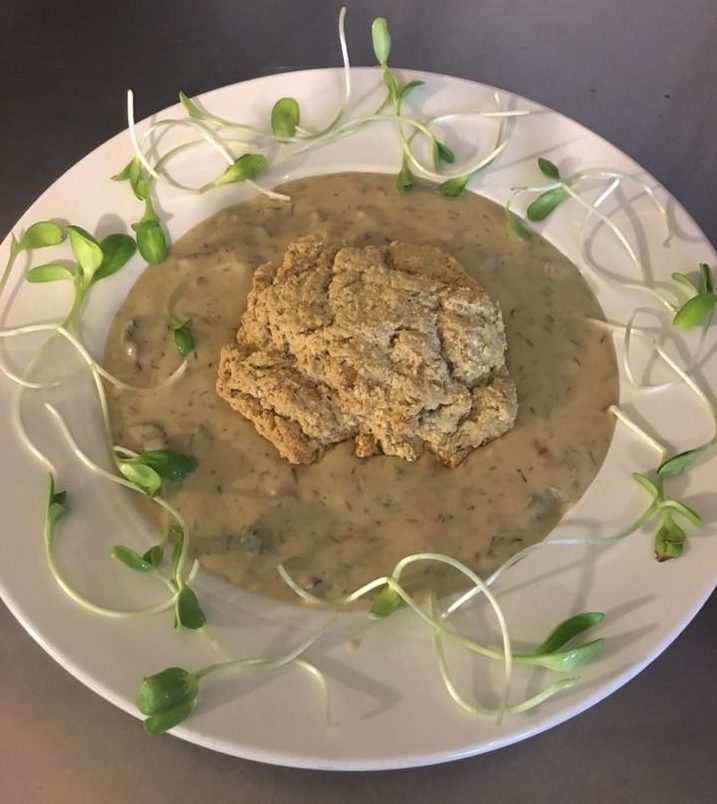 WHyld Ass clearly has a sense of humor and a mission. They are bringing fresh, flavorful, plant-based food with a nod toward the environment to central Phoenix. Printed all over the menu, WHyld Ass proclaims, “Excited to be here!” I believe them. And with food this tasty, I’m excited too.