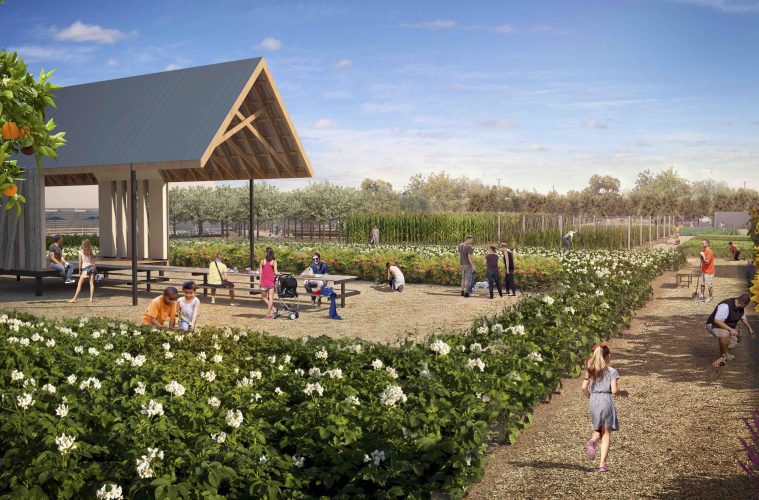 A Farm in the City: Aric Mei and Matthew Moore’s Growing Vision 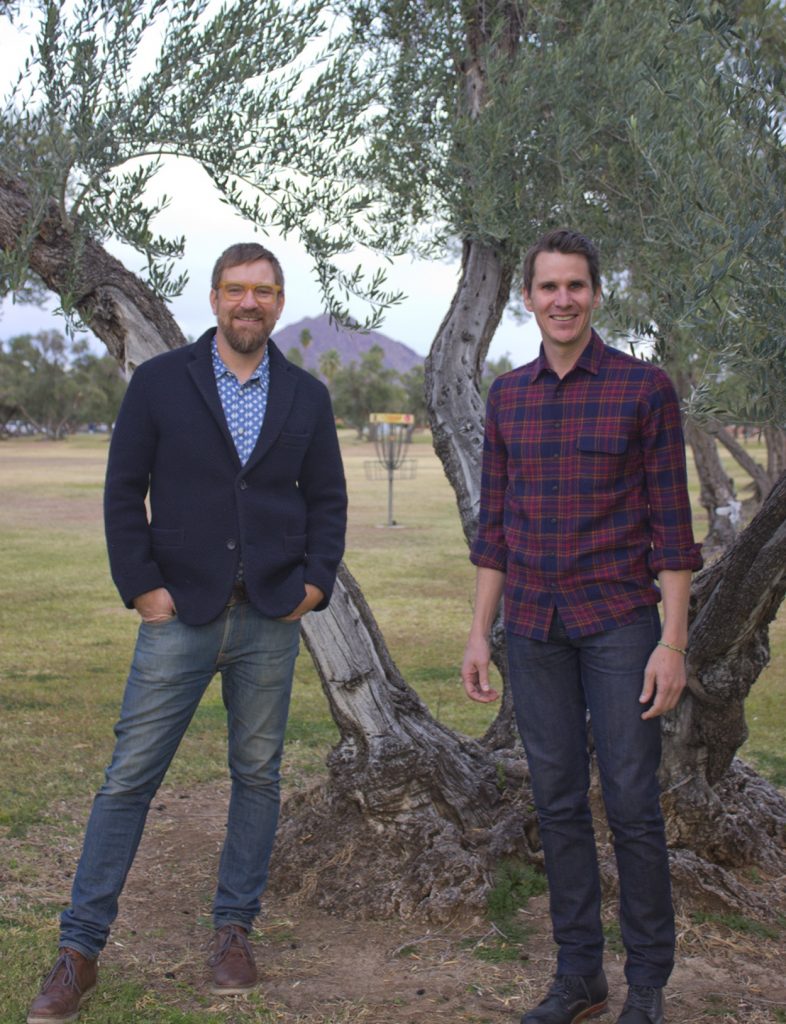 Once, the upwardly mobile neighborhoods of East Phoenix were mostly covered in citrus groves. The city was an oasis in the desert, one made possible by canals dug by an ancient people today known as the Hohokam. Then, following the end of World War II, the city began its meteoric rise, seeing its population more than quintuple.

As the suburbs grew and freeways stitched together the communities making up the Valley, the agriculture that once provided the region its raison d’être was pushed further and further afield. The five Cs yielded to real estate as the economic engine of the region.

One of the few physical remnants of this bygone bucolic era are the olive trees in Los Olivos Park, located a block north of Indian School and bounded by 28th Street to the west. The olive trees occupying the 28-acre park once served as windbreaks for the citrus orchards. The orange trees are long gone, replaced by grass fields where people kick soccer balls, toss Frisbees or walk their dogs. 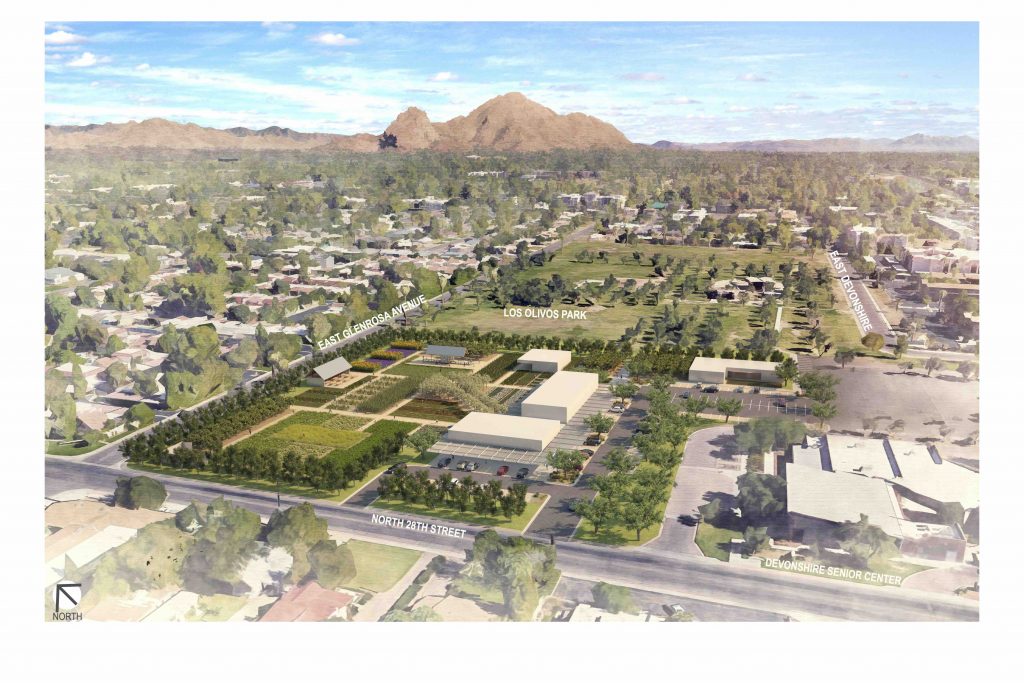 Aric Mei and Matthew Moore would like to return a portion of this fallow field to production. The project, known simply as the Farm at Los Olivos, is one of the more daring ones under consideration in Phoenix.

In response to a request for proposals put out by the Phoenix Parks and Recreation Department, the pair’s company, Greenbelt Hospitality, proposed to convert a portion of the park, 4.5 acres, into a farm, education center, restaurant and produce market. Of the three proposals submitted, theirs won.

The roughly $5.5 million project wouldn’t cost the city a dime. It would actually generate revenue for the parks department, which would receive a yet-to-be-determined percentage of the revenue created, of which a portion would go to directly benefit Los Olivos Park. In return, the city would lease a portion of the park to Greenbelt Hospitality for 40 years.

The project is unique, and much of it grows out of work Mei and Moore have already been pursuing through other means, such as unconventional art projects and educational initiatives at local schools. Moore – whose company, UP Furniture, was profiled in last month’s issue of JAVA – brings his background and perspective as a fourth-generation Arizona farmer and an artist. Like many of his other endeavors, a big part of the aim is to reconnect people with the natural systems that sustain them. 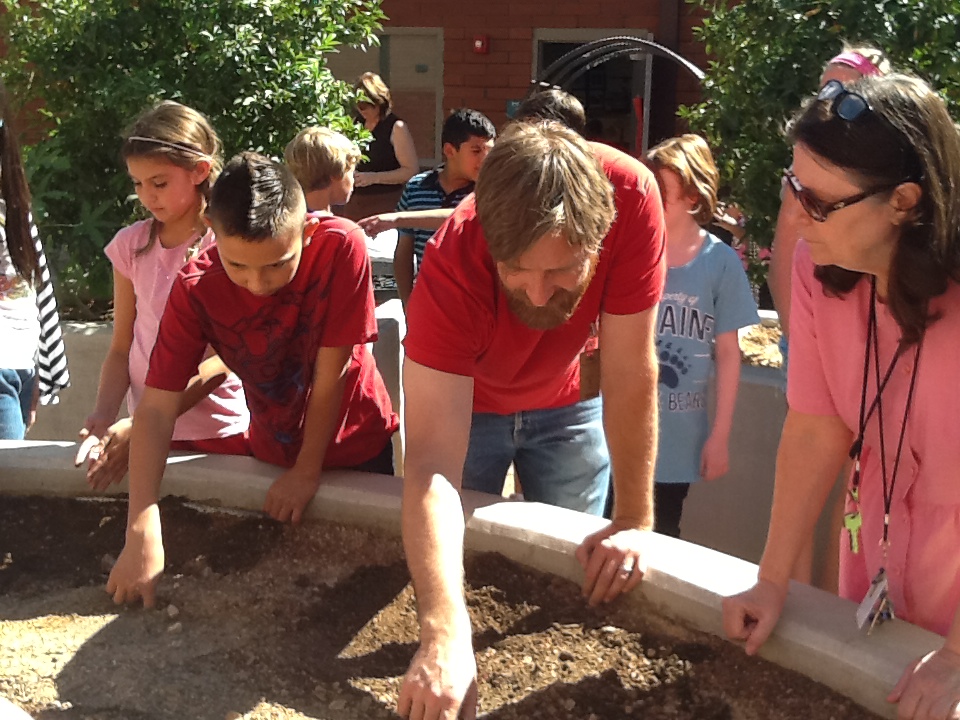 Through his Digital Farm Collective, Moore created time-lapse videos documenting the life of crops from seed to harvest. Emblematic of Moore’s unique approach – one that blends consumer education, activism and art – Moore arranged for the videos to be played in supermarket produce sections. The Farm is a logical extension of this, a place where people can watch their food grow in their own neighborhood in real time.

“To me, it is so important to understand how we live on this rock flying through space, and it’s so delicate. We are thinking about climate change and how we’ve removed ourselves, from a technological standpoint, from so much of where our food comes from,” Moore mused as we walked through the proposed site for the urban farm’s field. “We don’t think about seed to plate. The opportunity to come and see an environment that is cycling through different seasons is really impactful.”

Moore became excited as he described the litany of educational community projects he is dreaming up. These include walking tours and gardening and cooking classes for seniors from the neighboring Devonshire Senior Center. There would be a range of hands-on projects for students from nearby schools, such as a kind of scavenger hunt where kids would learn to recognize different crops and stages of growth. Moore is passionate about bringing kids out of classrooms and into the farm.

Listening as Moore describes the vegetable kohlrabi as “an alien spaceship sort of taking off out of the ground,” it’s easy to see how his creativity and passion will engage students not just to become interested in botany and agriculture, but in getting their hands dirty as part of a wider community. Indeed, Moore and Mei hope to grow the community, as well as pinto beans, peppers, corn and more.

“It’s so much more than a financial model – it’s about the community and what kind of space we can create, the ripple effect of an idea that goes out and becomes a lot bigger than what we’re doing here,” Moore said. 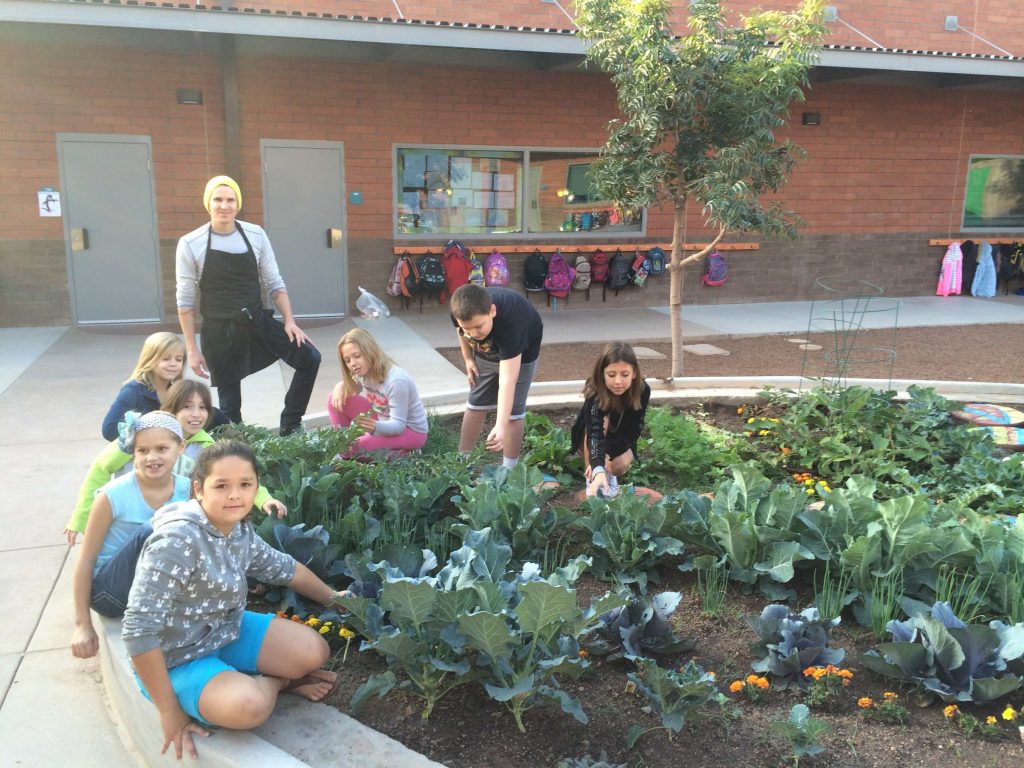 Wiry, with an angular, clean-shaven face, Mei has a background almost as eclectic as his partner’s. He started learning the ropes of the hospitality industry at his family’s restaurant, Nello’s Pizza in Tempe, since he could barely see over the counter. Later, he moved to Los Angeles to pursue a career in music, which eventually led him to working on music videos and commercials. His job at A Band Apart Films, a production company that Quentin Tarantino helped found, allowed him to work with the likes of NSYNC, Bon Jovi and Sheryl Crow, whom he appeared onscreen with briefly in the music video “Steve McQueen” as her paramour, when an actor didn’t show.

As fun as that was, Mei eventually tired of the artificiality and hungered to make something more real and permanent. He returned to the Valley and began work on the Parlor Pizzeria. He led the extensive remodel, which saw a vintage hair salon converted into the wood-oven pizzeria he has now run for nearly a decade. The small but prolific garden located on its premises helped initially stoke Mei’s interest in performance agriculture.

“I know it sounds crazy, but planting that little garden at the entrance to the Parlor, that was truly the gateway drug for me,” Mei said. At the end of a long day working on the build-out of the pizzeria, Mei would take off his tool belt and pull on his gardening gloves. It was a very public way to learn the ins and outs of desert cultivation. 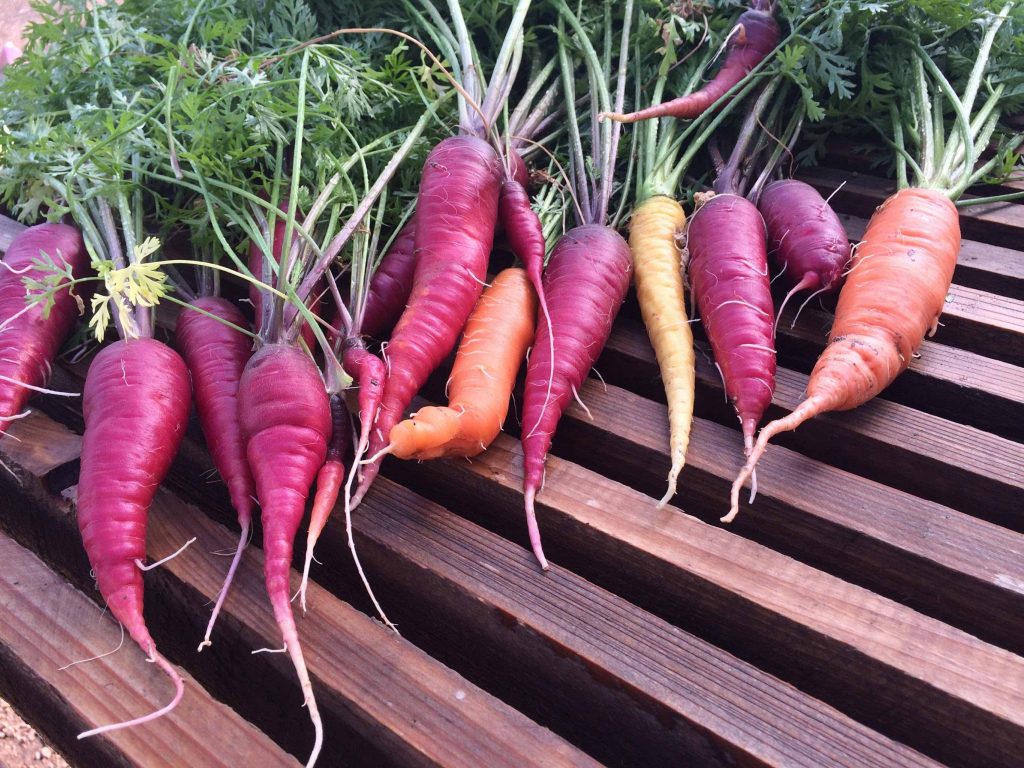 A big moment for Mei occurred while attending a meeting for a local politician at a private residence. He noticed the homeowners had raised beds in their front yard. Then he learned they had been inspired by his garden at the Parlor. Seeing the impact his little 100-square-foot plot had, he began to dream of something much bigger.

After the Parlor’s long-term success, Mei wanted to find a project that would allow him to do something different, something truly unique. “It has to be an evolution – for me, it’s about the search for something deeper,” Mei said.

Mei and Moore initially met when Mei agreed to host a fundraiser for Moore’s Digital Farm Collective at his home in Arcadia. Mei recalled them instantly taking to each other. They had both recently completed bathroom remodels and had, through coincidence or synchronicity, picked the exact same handmade tile from Mexico.

The more they spoke, the more they realized they shared. They had both driven the same type of car in high school, a Jeep Cherokee. Further, Mei had been volunteering with the Arcadia Neighborhood Learning Center, now called Echo Canyon School, where he taught kids not only about gardening but, putting on his chef’s hat, how to prepare and cook the foods they grew. On a deeper level, the pair shared a vision for pulling back the veil on our society’s industrial agriculture system. 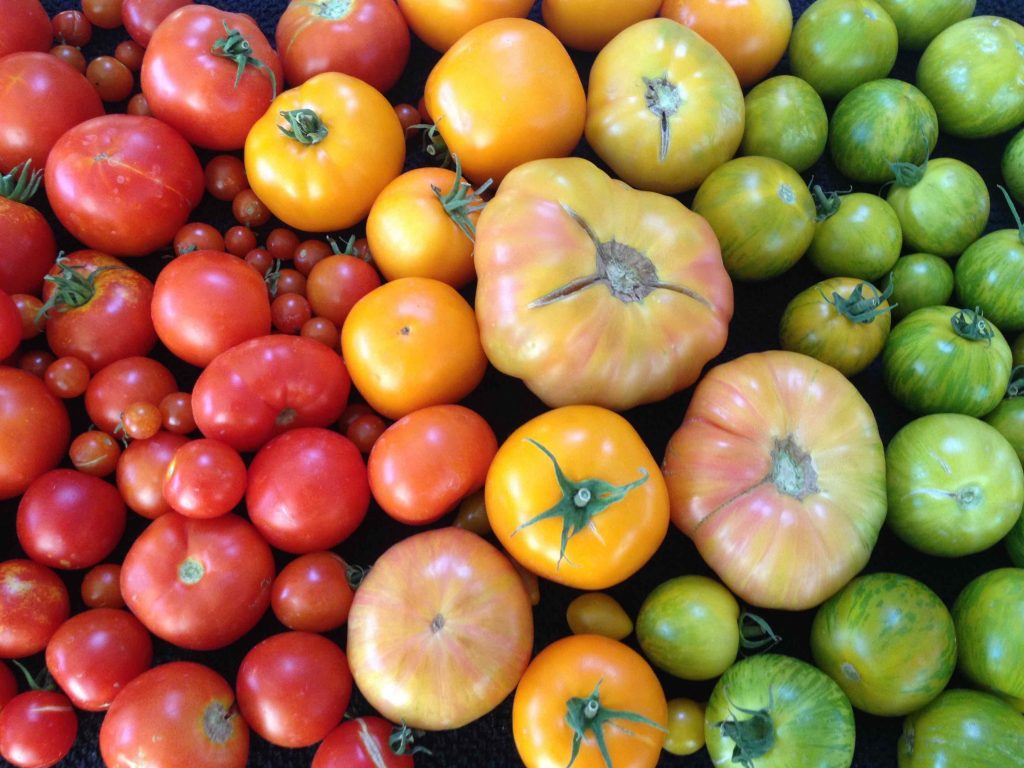 “If you’re a city dweller, your opportunity to see and understand agriculture in even the most basic of ways is nearly impossible,” Mei said. “This whole journey has really been about how to get that essence of agriculture safely planted in the core of our city for a very long time.”

Moore and Mei envision a project that is “generational.” They want to bring agriculture back to the city in a way that is sustainable. They spoke sadly of the closing earlier this year of PHX Renews, a 15-acre community garden that had been located near the intersection of Indian School Road and Central. By pairing the farm with concessions (a restaurant and produce market), they believe they’ve created a model that will finance itself and add something for all parties.

Like anything new, the proposal is not without controversy. A spate of unfounded rumors spread through the Devonshire Senior Center and online alleging that there were plans to sell the park off and convert it to condos. Mei and Moore suddenly faced a public relations nightmare, dealing with angry residents and senior center users.

Moore and Mei quickly organized the first of two public meetings on December 11 at the senior center, as the need to address the rumors forced things to move more quickly than anticipated. They spent nine hours meeting with residents to discuss their concerns and dispel the false rumors. After the people had a chance to meet the pair and see the details of the proposal, the vast majority seemed to support it. All the attendees that I spoke with said they believed the project should be approved and, more than that, were excited for it to open.

Mei and Moore will host a second community meeting at the Devonshire Community Center on January 11. Then it’s back to the Phoenix Parks and Recreation Board, probably sometime in late February. If the meeting goes well, the Farm at Los Olivos could be open and growing as soon as 2020.