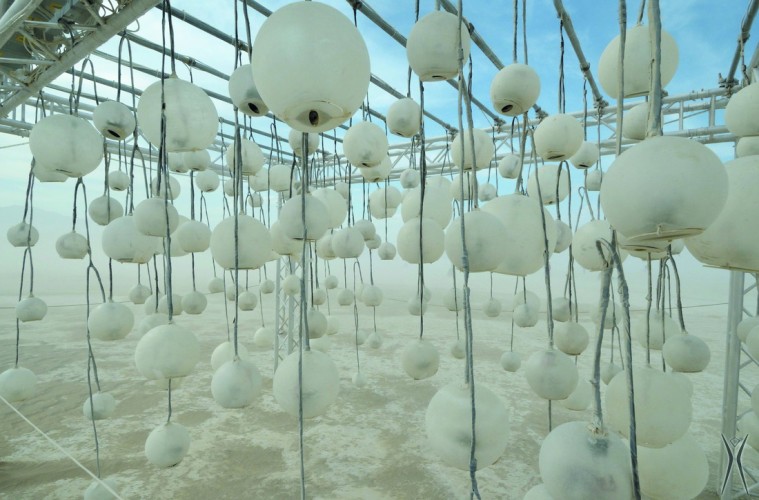 The New Age of Interactive Art

Canal Convergence, presented by Scottsdale Public Art, invites innovators of installation-style artworks to erect temporary art pieces, or happenings, along the Arizona Canal, just west of Scottsdale Road in the heart of Scottsdale.

When the globes are touched, the sphere reacts by making a sound and lighting up and/or changing color.

It maybe isn’t so surprising that one of the most technologically innovative pieces for 2016 has some roots in Burning Man, the pop-up art, ecology, technology and innovation gathering that takes place each year at Black Rock City, Nevada (the mantra of Burning Man is “leave no trace”—all structures, art works and amenities are temporary).

Purring Tiger is the artist duo of Aaron Sherwood and Kiori Kawai from Kingston, New York. They shared their interactive piece “MICRO” at Burning Man 2014. They built a stage structure with many hanging globes that would light up in various colors and make sounds. Dancers performed and interacted with the globes, setting off the sound and light features. 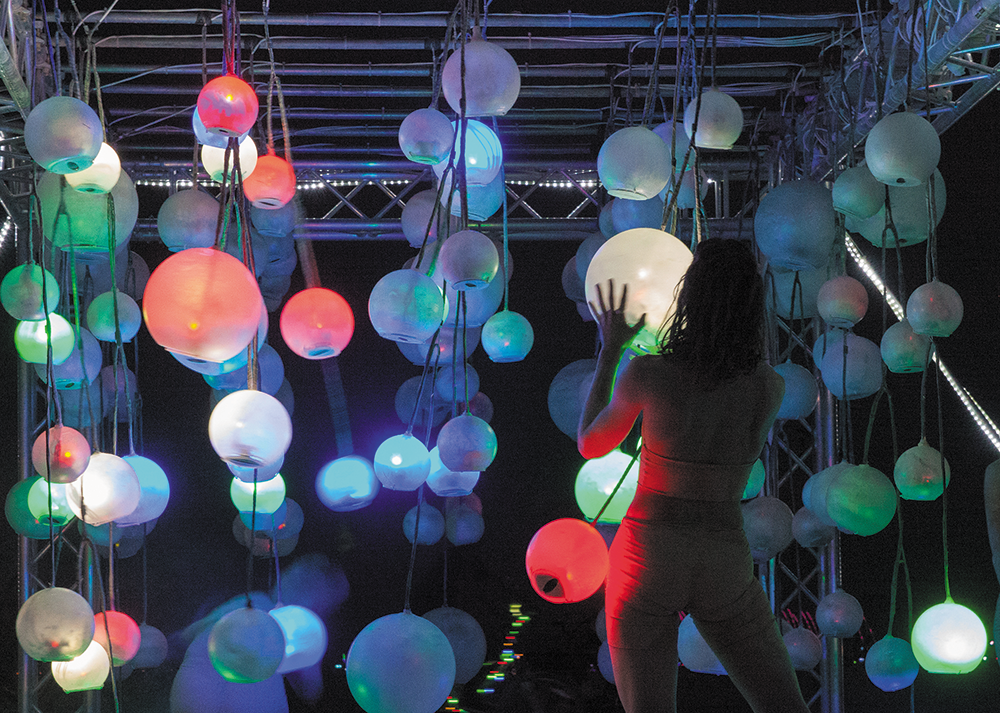 “We are calling [the Canal Convergence piece] ‘MICRO-Double Helix.’ The spheres will be laid out in two waves,” Sherwood says. “[The globes] will each have a different sound in them. As you go through, you activate all the lights and sounds,” Sherwood says.

Every globe is built with an amplifier, a small speaker and a light source. When the globes are touched, the sphere reacts by making a sound and lighting up and/or changing color. The intensity of the reaction depends on the degree of movement or touch coming from the participant. “Each little sphere has its own micro-controller inside it,” Sherwood says.

Sherwood uses a programming language called Cinder and C++ to bring it all together. “For ‘MICRO-Double Helix,’ the actual computer code that goes into it is not so complicated. The complexity is more structural and engineering-based. Especially when you have 200-plus spheres that all need different amounts of electricity.”

Kawai and Sherwood are travelling to Arizona 10 days before the Canal Convergence unveiling in order to get everything in place. It’s called “Double Helix,” Sherwood explains, because the layout is almost like a three-dimensional DNA map. But active human participants are necessary for the helix to form—the people moving through the installation will form the bridges or links between elements.

Sherwood is a musician and Kawai a professional dancer and they formed Purring Tiger as a way to collaborate. “We really wanted to do something we hadn’t seen before,” Sherwood says of their explorations in collaboration.

“Aaron developed a system so that my movement would create a sound and also a visual projection. And then he could improvise music to the sounds that my movements created,” Kawai explains. “That’s how we made our first performance.”

For the next few live performances, they hired more dancers to create more of a spectacle. “And then we started to let the audience come up on stage afterward to experience the interaction,” Kawai says. “The first time we brought our installation to Burning Man was 2013. I saw that people moved their bodies from the wonder and curiosity—or even fear—of touching some part of the installation,” she says.

Sherwood studied interactive telecommunications at New York University. Kawai studied dance at the Osaka University of Arts in Japan. She moved to New York as a professional dancer and has performed with Elaine Summers Dance and Film, Skymusic Inc., at Lincoln Center and the Brooklyn Museum. She also teaches yoga and Pilates.