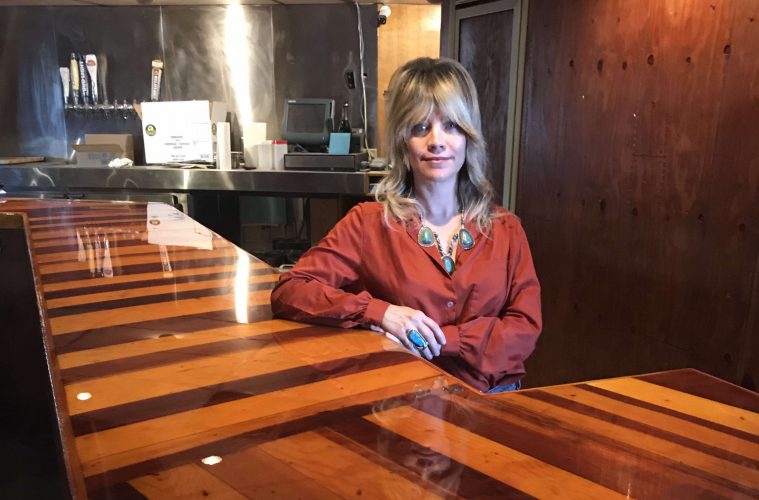 The Dirty Drummer: Bringing Back a Phoenix Classic 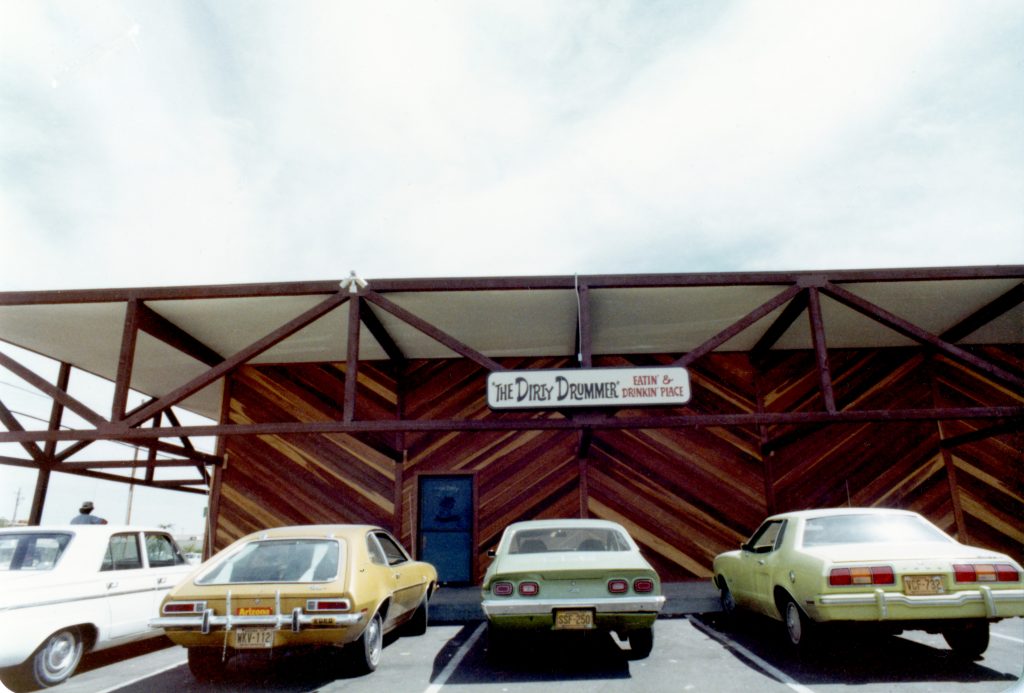 When Dana Armstrong, Andrew Smith, and Tom Bernard began chipping away the white tile on top of the long bar at the Dirty Drummer on 44th Street and Oak in Phoenix, they uncovered something surprising: the almost perfectly preserved bar top made by Danaʼs dad and friends back in 1980. The redwood and pine planks were nearly pristine under a thick layer of amber-tinted epoxy resin. “It was like opening a time capsule and releasing the energy that had been buried for decades. It really was a game-changer for us, because it gave us a charge to continue to bring the whole place back to life,” says Armstrong.

“Prying and scraping all of the tile and backing board felt like we were liberating the bar underneath. I felt like an archaeologist,” says Bernard. The trio sees the bar top, now emitting a warm and beautiful glow, as a metaphor for the entire project – one of restoration and rediscovering history, while also building a business that is warm, durable, and welcoming to everyone. 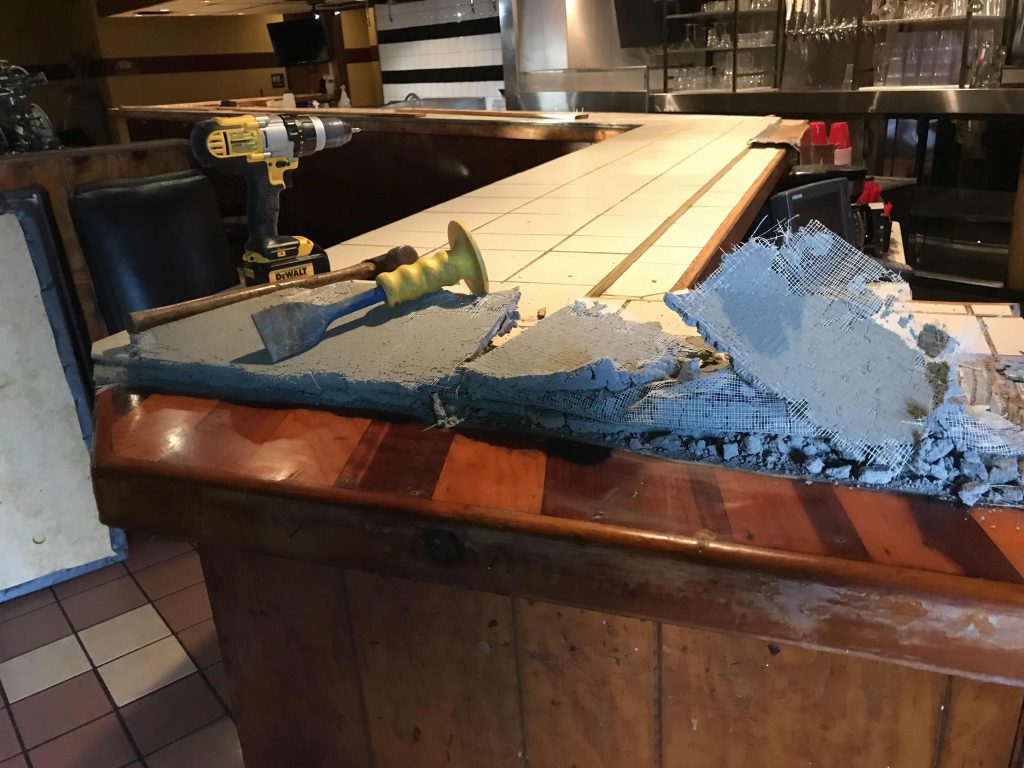 If you grew up in the Valley and haven’t heard of the Dirty Drummer, ask your parents –they probably have. When the name is mentioned, most seasoned Phoenicians respond with a knowing smile and can tell you which of the fourteen locations once spread throughout the Phoenix area was “their” Drummer. Maybe it’s because of the unusual name, or perhaps it’s the fond memories of camaraderie and good ole times had there, but one thing is for sure – the Dirty Drummer is an indelible slice of Phoenix history and a true original. 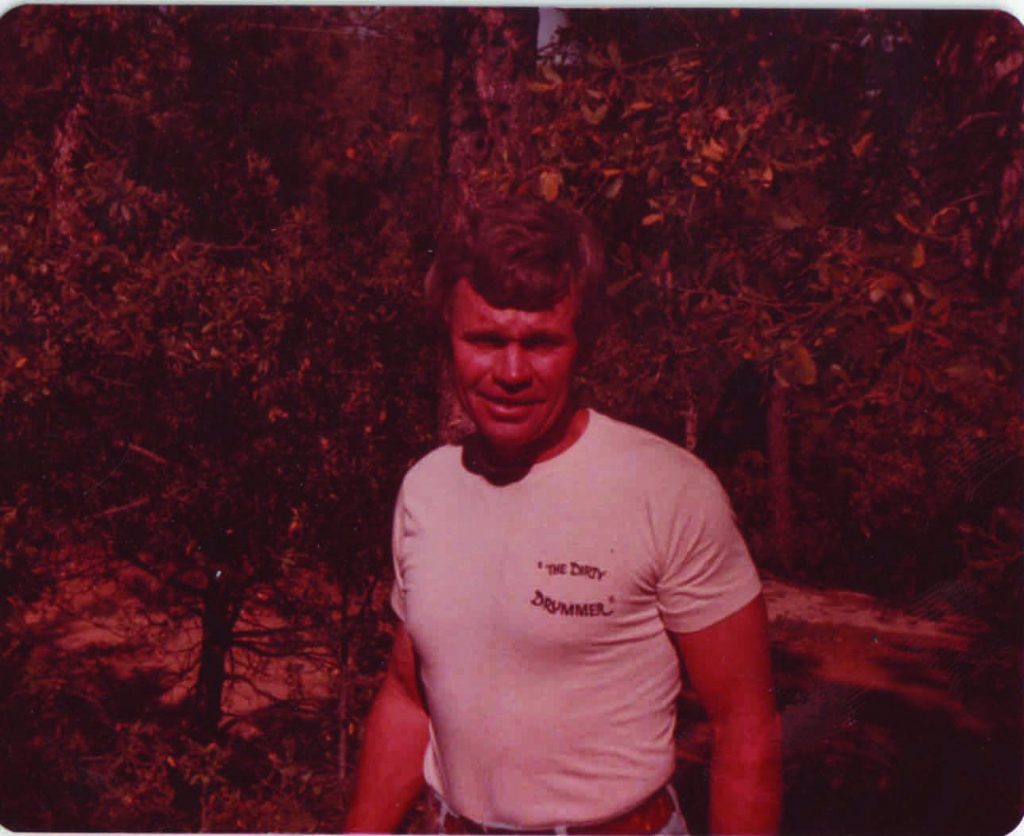 In 1975, Dana’s father, Frank Armstrong, a former athletic coach for Scottsdale School District, and his pal Dave Werner opened the first location on McDowell Road and 34th Avenue. They came up with the name by simply combining their nicknames. Many people called Frank “Drummer” – a name given by his golfing buddies based on his likeness to the British comic book character Bulldog Drummond. Dave’s nickname was Dirty Dave. “I actually don’t know the origin of that, but he had a series of new Corvettes in the ’70s and ’80s, and the license plate said Dirty D,” says Armstrong.

Back in the day, a big part of the Dirty Drummer concept centered around sports. It wasn’t just a place for spectators, like today’s mindless sports bars, but for participants. The culture was active in real life, and their hub was the Drummer. This is part of what made it a success – the convergence of fun, fitness, socializing, and community. They organized 10K races, bus rides to ASU games, and golf, softball, and bass-fishing tournaments. Participants even ran marathons decked out in Dirty Drummer Racing Team gear.

“My dad loved merch,” says Dana. The iconic logo with its brand character wielding a drumstick, beer, and cigar was born on a cocktail napkin and eventually emblazoned countless items. “There was a t-shirt for nearly every event, and not only shirts, but jackets, sunglasses, running shorts, visors, athletic shoes, even jeans embroidered with the logo – this was the ’80s – and the Drummer’s merch game was strong. We strive to continue this tradition.” 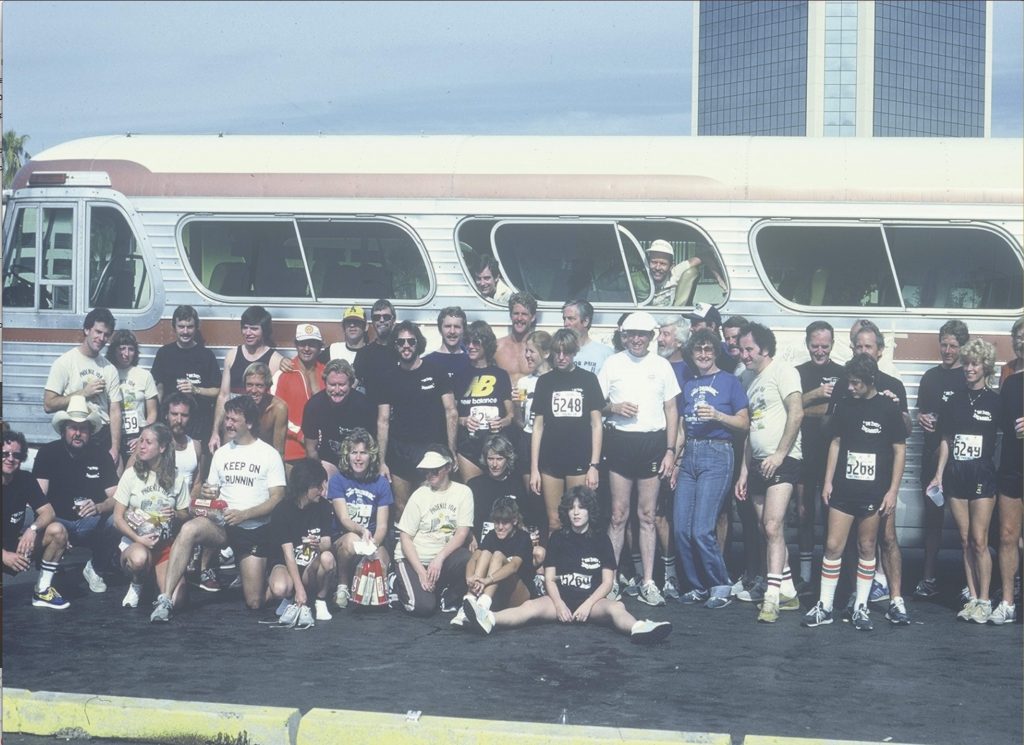 “The Dirty Drummer was never simply a sports bar,” adds Bernard. “Coach Armstrong inspired so many with the values of teamwork, cooperation, positivity, and practice –knowing that teams are greater than the sum of their parts.” Sadly, Frank passed away in 2012, but he left an enormous legacy. “This is evidenced by all the loyal friends and customers stopping by to check in on our progress on a daily basis,” says Bernard.

The ’70s and ’80s were especially good to the Dirty Drummer. They established a formula that worked and expanded quickly. The epoxy technique – popular in the ’70s for its appearance and durability – became one of the trademark design elements of all the locations. There were also elevated wood-and-vinyl booths, plentiful TVs for watching sports, and more wood on the walls, bar tops, and tables.

For Armstrong, these design details are reminiscent of her childhood. “My dad and his friends made and epoxied the tables for the bars at our house. Epoxy was everywhere, and there are still remnants in my mom’s carport,” says Armstrong. “This whole project brings back so many memories. I’ve always been fascinated by my dad’s old photos and videos.

“There were so many friends, activities, and good times to be had here in Arizona. I mean, when I look at the images, they all look like they’re having the best time of their lives – all the time. That’s probably why that era resonates with so many of us. The times seemed more carefree, full of conversion vans, Igloo coolers, and Fleetwood Mac on the radio,” says Armstrong. 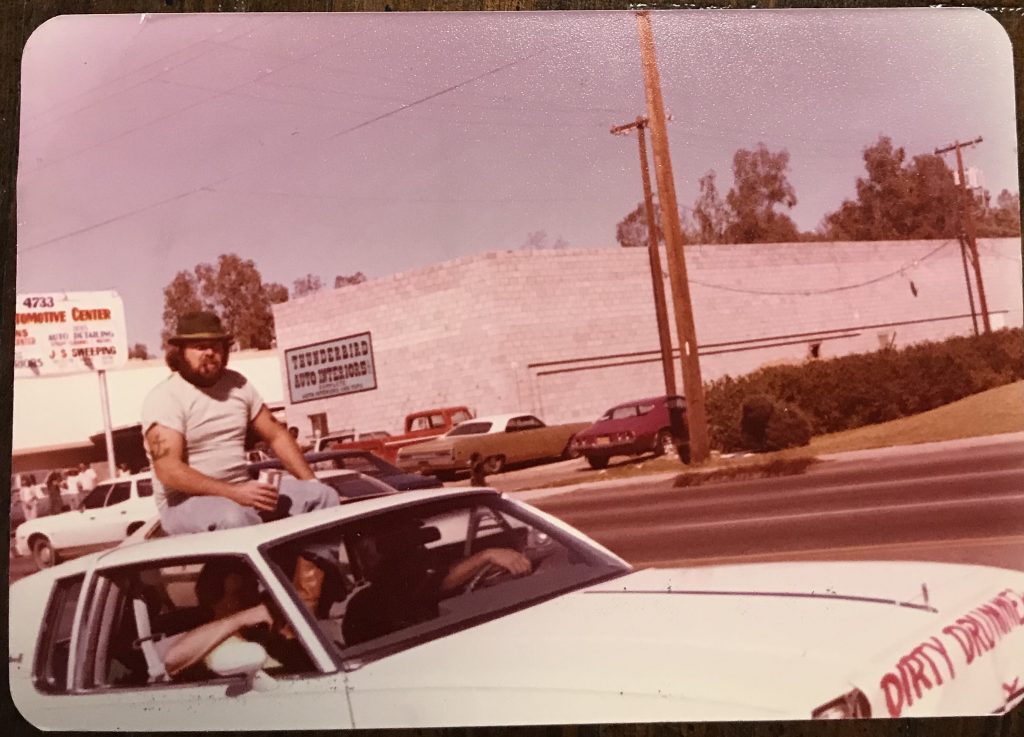 Like any long-lived business, the bar had its ups and downs. Frank stepped away from daily operations in the ’90s. Dave kept the bar afloat as a labor of love until he decided to retire in December of last year. It appeared we might lose an original Phoenix fave once and for all. But the timing was perfect for Dana and her partners to enter the picture.

Thanks to a friend of theirs, they have learned the epoxy technique and refinished the bar and made new tabletops to match (those were also covered in white tile, but had no original wood underneath). “We’ve discovered a lot of relics from the last five decades while renovating the building, and that has encouraged us to try to bridge the past with the future,” says Armstrong.

Bernard offers his philosophy on the project’s design: “When you walk into a space, the totality of a thousand design decisions coalesces instantly into a feeling. At the Dirty Drummer, which was a big part of Dana’s childhood, we are using design to recapture what she felt during those formative years.

“We are using design to return the Drummer to its roots, to celebrate the ethos that emanated from the owners and from the bar itself – an ethos that celebrated balance between work and play, between activity and relaxation, between family and friendship, and between our personal and social lives.” 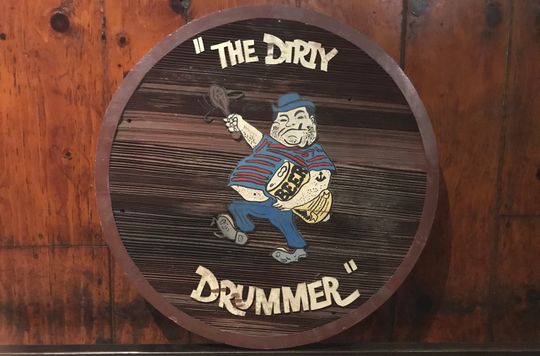 Armstrong says, “We’re taking the major design elements of the original decor and reintegrating them back into the bar. For instance, the long row of booths used to have a textured amber Plexiglas panel running between them. That panel was living behind my parents’ house for many years but is now unfortunately long gone, so instead we are using Flemish amber glass as window covering.”

The hand-carved wooden signs from the ’70s are back. They’ve also made the stained glass logo panel more prominent while redesigning the soffit. “I believe what they did originally was timeless. Yes, it’s of the era, but I don’t see it as kitschy. I think it’s classic,” she says.

The diagonal wood paneling they recently added to the walls is reminiscent not only of the ’70s/’80s back bar of the Drummers but also the exterior of some of the locations. The vintage Mission-style lamps that Dana has accumulated over the years are nearly identical to the ones in the old Drummer photos. “Luckily, we still have the original booths, some of the paneling, and of course the excavated bar top. It’s meaningful to us to incorporate the roots of the business,” she says.

Some good friends who recently remodeled their 1940s Encanto home donated the old parquet flooring to the project. That now lives on as the Dirty Drummer’s dance floor. Dana plans to bring her long-running Valley Fever country music night to the bar’s new stage, which means that floor will see a lot of action. The gold-veined mirrors were sourced from an estate sale in Sunnyslope. The bathroom mirrors came from a church in Mesa. “Most of the skilled labor has been from people we know,” says Armstrong. “A lot of this was built by friends, and they will forever be a part of this place.” 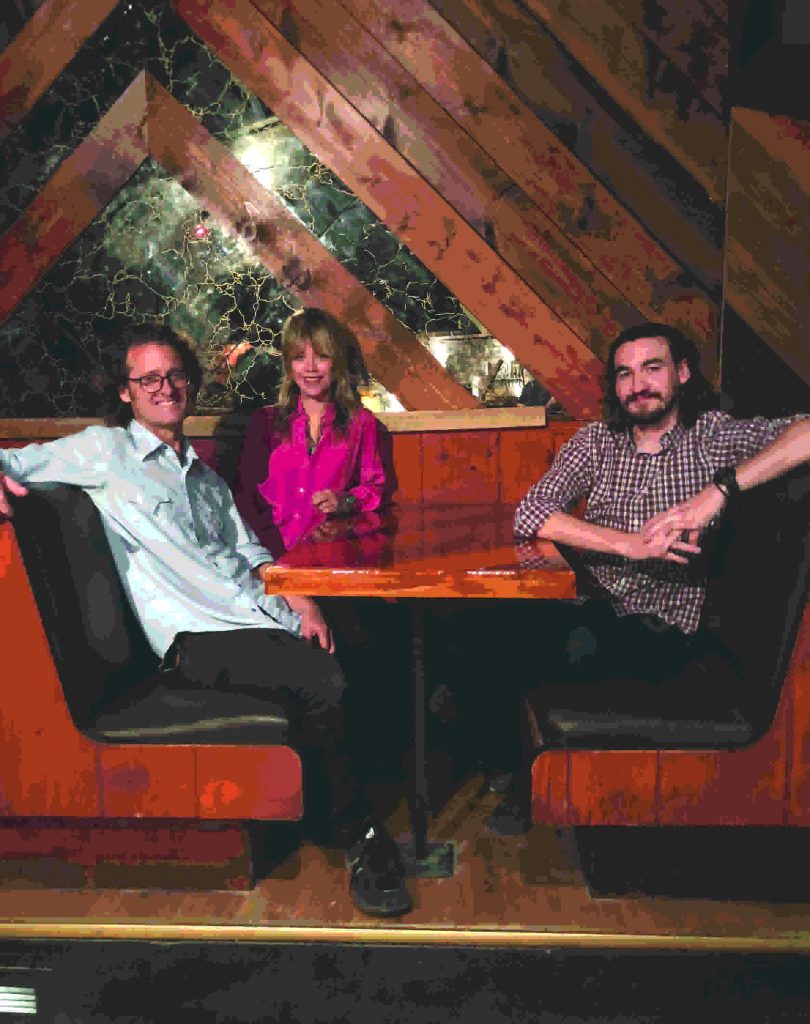 Reflecting on the Dirty Drummer’s imminent reopening, the third partner, Andrew Smith, says, “The Dirty Drummer is such a significant landmark for Phoenix. Almost everyone who was around during the ’80s and ’90s has a story to tell about the bar. We are putting our hearts into this project to keep it an anchor point for those memories, as well as a place to create new ones.”

Although the new Dirty Drummer is bringing back the vintage ambience, Andrew, Dana, and Tom have a vision for the future, based on fundamental values “Although a lot of thought and detail has gone into the design, we hope that aspect of the Drummer serves as a backdrop for the real purpose of the business – the people and their experiences. If the space can enhance that social aspect, then we’ve done a good job.”