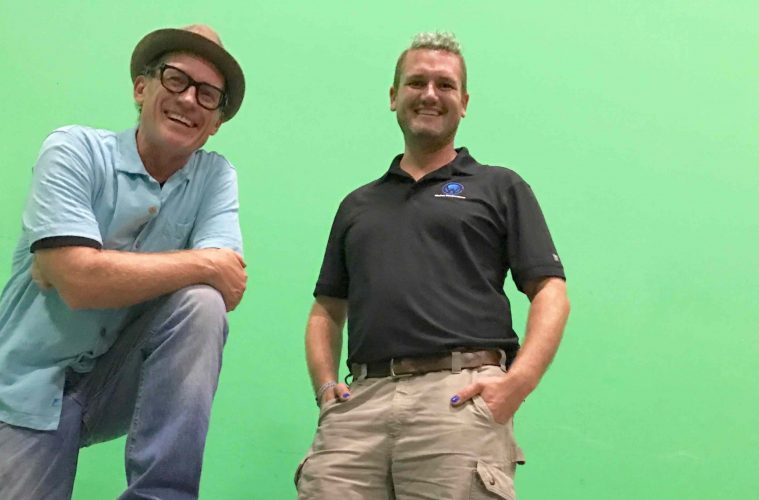 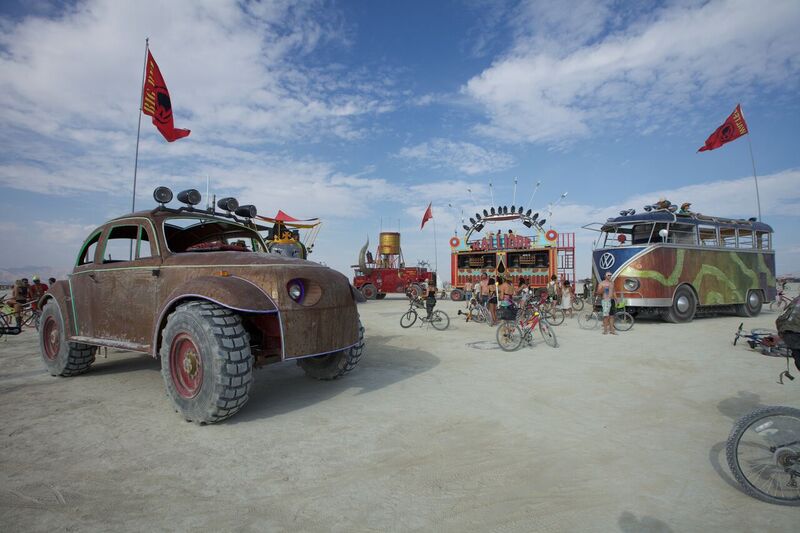 The metallic coating on the rigid foam insulation used to construct the yurts of Walter Camp gleams in the sunset as the playa dust is hosed away. Giant machine hulks are still strapped to the flatbeds that ferried them home from Burning Man, having returned this very afternoon. As I park and approach, a few crewmembers lay down their pressure washers and towels and converge upon me. Despite my awkwardness, they refuse anything less than a complete hug, pressing their mud-clad bodies against mine.

This may be as close as I ever get to Burning Man, but this extension of that desert bacchanalia, with its genuine sense of radical inclusivity, art projects dreamed on an order of magnitude far beyond gallery cubes and a community united in an absurdist purpose. This is at the heart of Walter Productions and the rest of the Walter assorted ventures.

Walter Productions is hard at work “activating” spaces and minds both around the country and in our sun-soaked Valley—from unique immersive yoga to an artistic fleet of oversized vehicles, some of which breath fire and project lasers, to the private parties Walter throws for a who’s-who list of Silicon Valley companies like SpaceX, Twitter and Google.

Kirk Strawn, M.D., is the founder of Walter Productions, although he emphasizes its collective nature every chance he gets. If the easy laughter and whistle-while-you-work attitude of the crew is any indication, this isn’t just the usual corporate “new speak” filling the press releases of the so-called new economy. 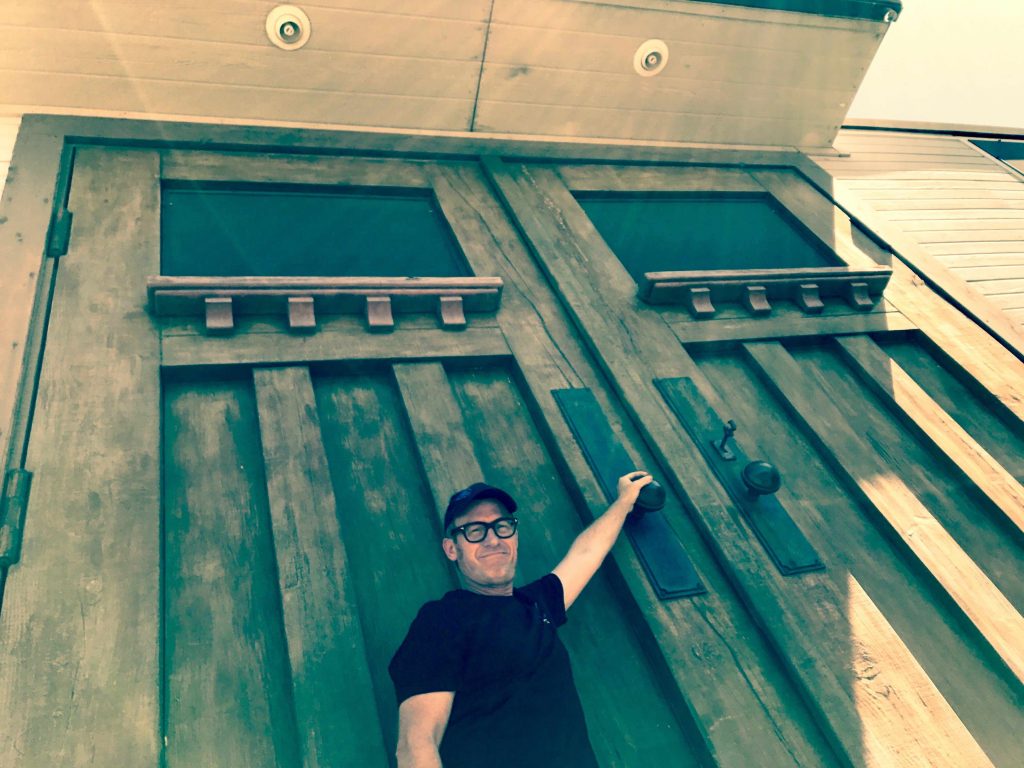 When we sat down in one of the several buildings currently occupied by Walter Productions, Strawn explained that it all began with a trip to Burning Man in 2007 with his family. What they saw and experienced inspired the Strawn family to bring something back the following year. “We actually collaborated with many people on the creation of a giant Volkswagen bus,” Strawn said, “which we then took to Burning Man and shared, and from there, we never stopped building.”

Today, Walter occupies three spaces throughout the Valley: the Walterdome, the Studio and the Depot. It is currently converting a former fire station into a brewery, slated to open early next year, bringing the total to four. After that will come a very big but super-secret project.

The Walterdome is the original home of Walter Productions, or home away from home if you take the customary Burning Man greeting, “welcome home,” literally. Housed in part of the repurposed Ponderosa Lumber Mill in south Scottsdale, the location is also home to Walter Art Gallery and its cooperative brewery. 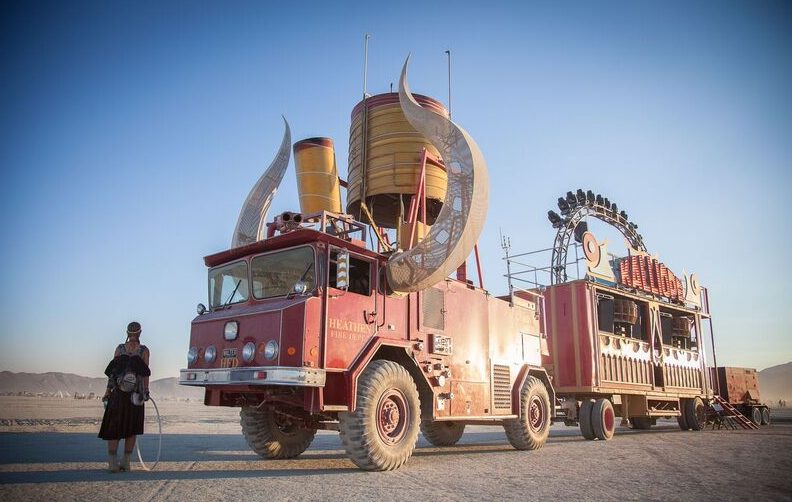 Here Walter partners (or “cohabitates,” in Strawn’s words) with the Maker Twins & Co., a collective of self-described hackers, makers and dreamers, started by two brothers who are closely tied to Walter. Through partnerships with many other groups and individuals, Walter augments its own deep reservoir of skills and equipment, which includes 3D printers, laser cutters and a CNC mill, to name a few.

It was here at the Walterdome that the fleet of art cars was built, from giants like Walter the Bus, fire-breathing Heathen and Kalliope down to the slightly less gigantic but oversized Baja bug, Big Red. This is also where Maker Twins built the giant animatronic tick that they brought to life earlier this summer at San Diego Comic-Con for Amazon Studio’s reboot of “The Tick.”

The main entrance to the Walterdome is a pair of scaled-up giant doors fitted with equally large custom hardware. The doorknob is roughly the size of a bocce ball and positioned a little under halfway up the 14-foot door.

When Strawn coyly asks me how I might open a door like this, I stare up with a twinge of childlike wonder. I thought of the giant chair and table set of artist Robert Therrien housed in the Broad Museum in Los Angeles. (Legend holds these outsized pieces are so large, the museum had to be built around them.) 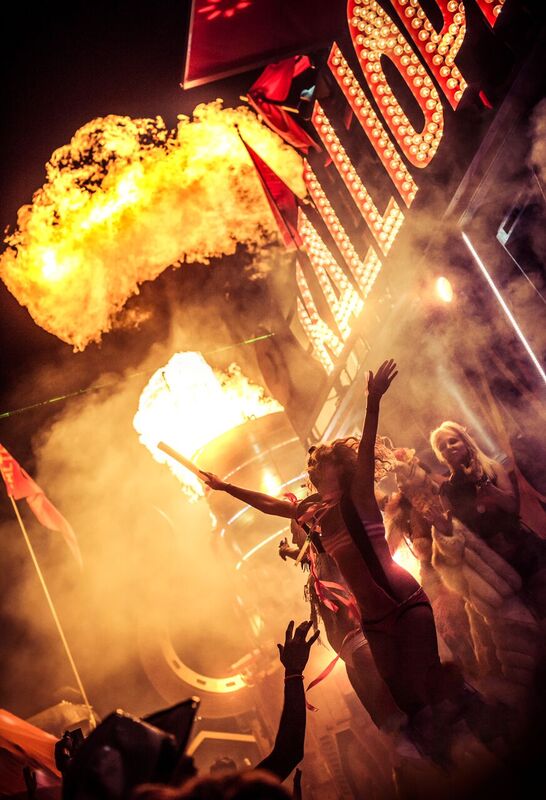 What inspires this sense of wonderment is something Strawn and others discussed throughout our interviews. It is part of what Walter is. Not just a fleet of giant art cars, large buildings and assorted business units, but a complex of ideas complete with its own specialized vocabulary.

One of the important terms is “activation,” which describes the way Walter transforms and reimagines the spaces it occupies. It brings with it a host of other words, many of which can be found within the “10 Principles,” a sort of constitution or algorithm for Burning Man. Participation, inclusion, communal effort and self-expression are a few of those terms and are part of Walter Production’s goal to extend the Burning Man experience beyond the temporary thoroughfares of Black Rock City.

Walter’s second location, called the Depot, is housed in a former National Guard facility on 7th Ave. and Roosevelt in Phoenix. The day I visited, a group of volunteers and employees were hard at work cleaning and storing their disassembled camp, freshly returned from Burning Man.

“We could not do what we do without hundreds of people coming together to make it happen. It’s volunteers really, it’s not just paid staff,” said Ryan Tucknott, director of operations for Walter. “It’s a very unique blending of community involvement, which is not typical of most commercial entities.”

When I compared the operation to a small army, Strawn was quick to point out they even have a tank. The tank is called Mona Lisa—all Walter machines have names—and was modeled on Leonardo da Vinci’s famous sketch of a proposed war engine for the Duke of Milan. 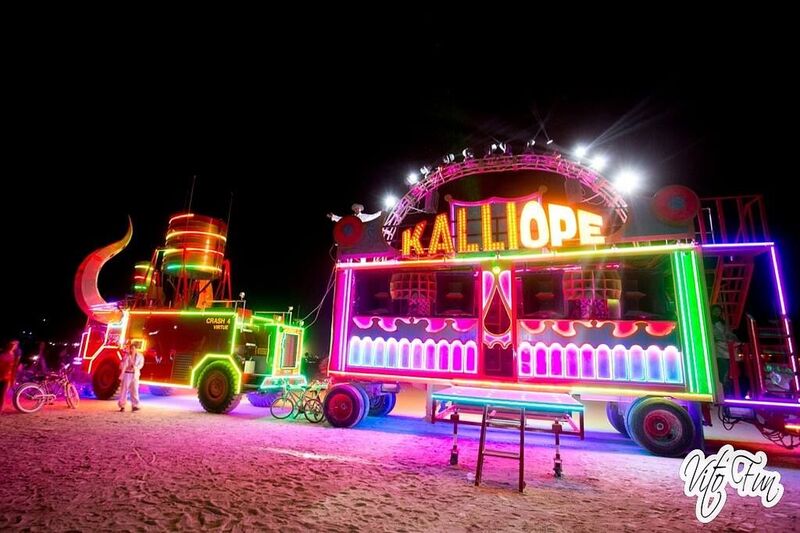 Walter’s third space is located a few blocks east of the Depot, also on Roosevelt. It was the original home to Canyon Records, the first label dedicated to American Indian music and one of the oldest studios in Phoenix. It boasts a massive green screen, or psych screen, as Strawn calls it. Over the next few years, half of the building will be torn down, and the remainder will be gutted and then rebuilt into a 50,000-square-foot arts and entertainment venue, which Strawn promises will be “unlike anything else anywhere in the world.”

We can’t say too much about it at this time, but Strawn does offer some tantalizing hints about the secret project. “It’s very Walter to have things big,” Strawn explained. “The inner kid comes out when you’re around big things. You kind of can’t help yourself. If there’s a big toy, adults like to play with it. We all like to play. Your inhibitions get broken down.”

While we’re on the topic of gigantic games, we might as well hit pause and discuss Walter’s involvement with the first Lost Lake Festival. Scheduled for three days later this month (Oct. 20-22), Lost Lake is produced by Superfly, the people behind Bonnaroo, Outside Lands and other summer festival stalwarts. Walter has worked with Superfly on a number of projects over the past few years.

Their first festival with Superfly was Bonnaroo in 2014. They brought Big Red (a giant Volkswagen Baja Bug with neon accents) and Kalliope, Walter’s portable soundstage. Named for the ancient Greek goddess of epic poetry, Kalliope’s previous incarnation was as a 1969 Freuhauf semi-tractor trailer that had lain dormant and rusting at an old mine in Jerome for years.

“It started out with us wanting to put a DJ on top of a fire-shooting fire truck,” Tucknott said. “With the collective effort of dozens of people applying their input throughout that process, it resulted in this highly unique machine that you see.” Kalliope is now a huge mobile stage resplendent with over 65,000 watts of sound, vintage speakers, lights, lasers and, of course, flame effects.

Traditionally known for jam bands, Walter Productions helped usher EDM acts into Bonnaroo’s festival repertoire. “That first year, Scrillex ended up doing a surprise sunrise set on Kalliope to about 8,000 people,” Tucknott said. “That really started a momentum with Kalliope, and really the crowd grew even more the next year.” 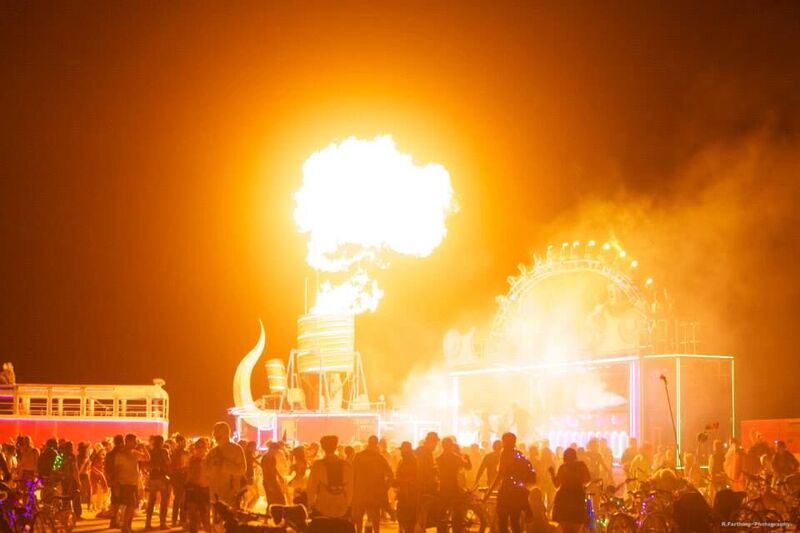 The trust they built with Superfly, plus a proven ability to engineer outlandish but safe spectacles, contributed to the decision to pick Phoenix as the home for Superfly’s first new festival in years, which will feature top musical acts, local cuisine, gigantic games and art.

As you may have guessed, Walter is helping design and construct the Lost Playground, which will feature a variety of oversized lawn games with names like Life-size Connect Four, Mega Twister and, a personal favorite, Humongous Cornhole. “A lot of [the games] are going to have a technological component,” Tucknott said. “So, it’s responsive to lighting, like table tennis, but light is going to respond to the ball, or Connect Four, as the chips are falling, light and sound will feed back to you.”

Walter Yoga was started to balance out the ecstatic all-night dance parties through yoga and meditation, explained Gordon Ogden, marketing manager for Walter Productions and the event producer/yoga instructor for Walter Yoga. Walter Yoga’s tagline is “love, lights and lasers,” which should clue you in to their unique approach. Integrating music and a variety of light-based special effects, Walter Yoga’s carefully designed classes create surprise and whimsy for participants.

Another venture of Walter Productions, and of particular interest to the little pyromaniac inside us all, is its partnership with Purdue University Graduate School of Aeronautics and Astronautics in the design and construction of what Strawn somewhat understatedly refers to as “flame effects.”

“The very first flame effect they helped us make was the world’s largest combustible vortex ring generator,” Strawn said. “It’s a six-foot-diameter piston. It creates a vortex ring, which is like a stable structure, like a smoke ring, but it’s made of propane, and then we ignite it up in the sky.” Or, as Johnny Cash might say, a burning ring of fire.

It may not be rocket science, but it certainly bears the fingerprints of rocket scientists. There is also a third-party safety engineer and a dedicated fire team. When you’re shooting 50-foot fireballs around some of the nation’s top musical acts, you can’t afford mistakes. 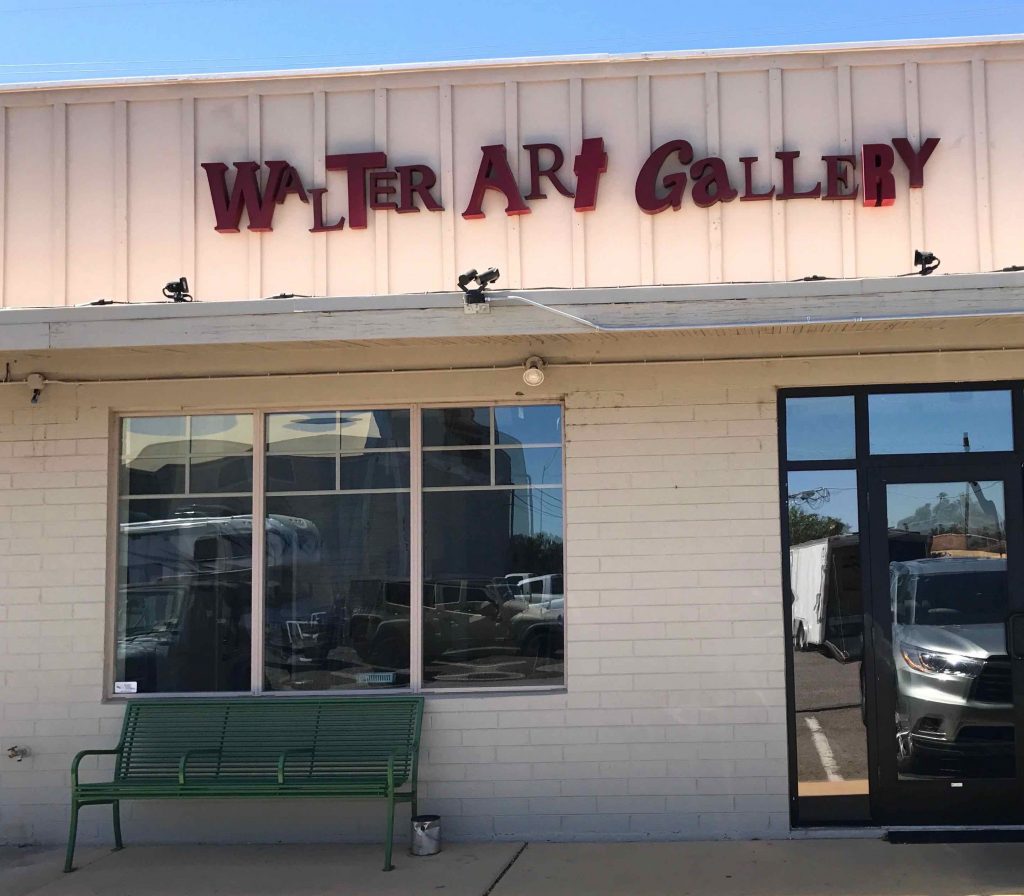 Tucknott explained that the most unique and challenging aspects of Walter’s work stem from its non-linear build process. “We don’t build things in a linear way, where you design and procure, then you build and refine—and you do those as block chunks,” Tucknott said. “Our design and our build happen concurrently, really throughout the entire process.”

This has led Walter Productions to, at times, if not reinvent the wheel, at least rediscover the process of its invention. Working with a ragtag assemblage of old tractors and airport crash trucks, parts aren’t always readily available and have to be scavenged from scrapyards far and wide or painstakingly reverse-engineered and then reconstructed.

Some might question the effectiveness of this approach, of wedding the old to the new, no matter the cost or challenges involved, but, as Strawn says, “That’s Walter.”
“Everyone tells us we should just level this building,” said Strawn as we walked through the Studio. “There’s no possible way. You’d lose all that 1940s history.” 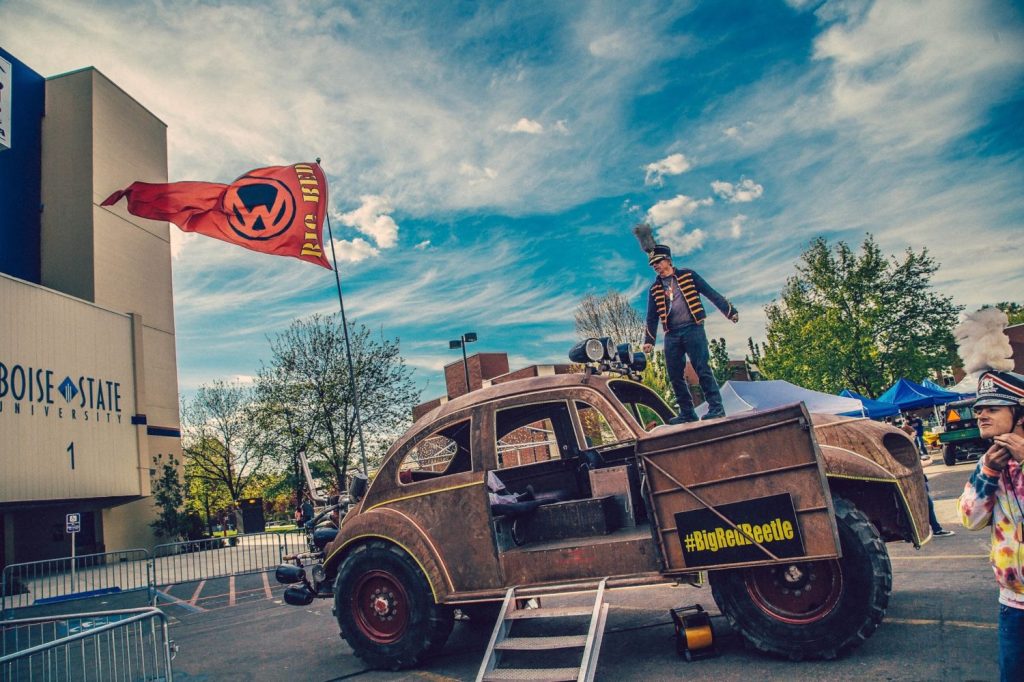 “We love our old fire trucks and stuff. Giving things a second life is a big part of Walter,” explained Strawn, his voice rising a register and his eyes narrowing. After a long pause, he added, “People need second chances as well, just like old machines do.”

“So many things mess up at Burning Man that you start to understand how important it is to kind of go with it and to be able to problem solve, and to work through the challenges. Its great training, and I’m sure that’s part of why Elon Musk, the Google guys, Tony Hsieh and everybody else like that are going to Burning Man.”

Walter Productions and its crew are doing big things in Phoenix. See some of these yourself at the Lost Lake fest this month and, if you’re lucky, maybe you will get to press the massive red button controlling whatever infernal machines they’re currently dreaming up. 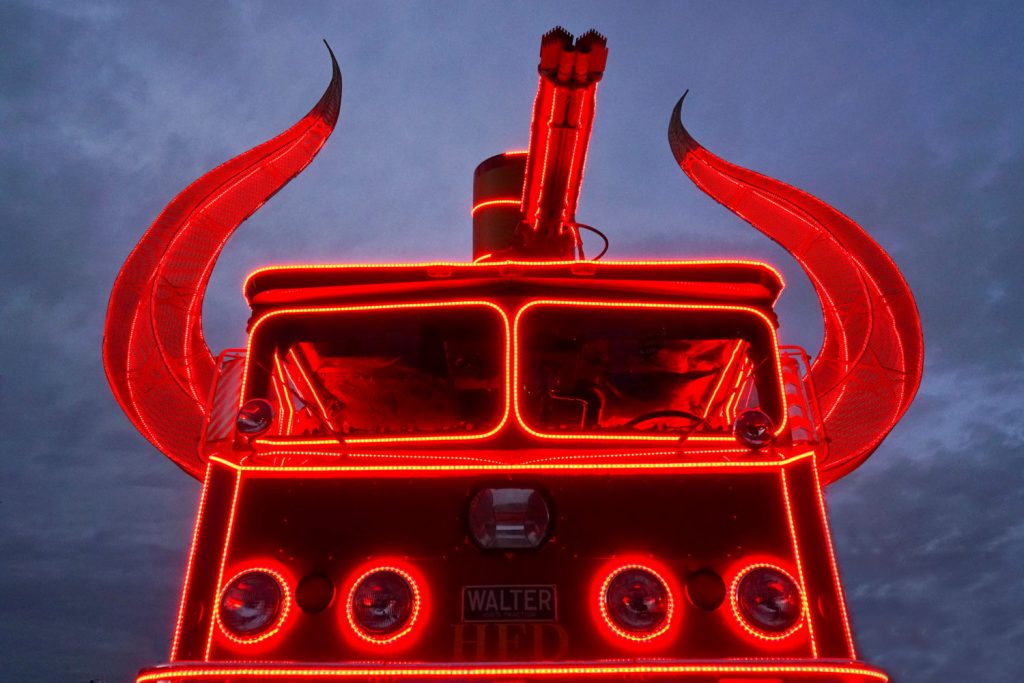