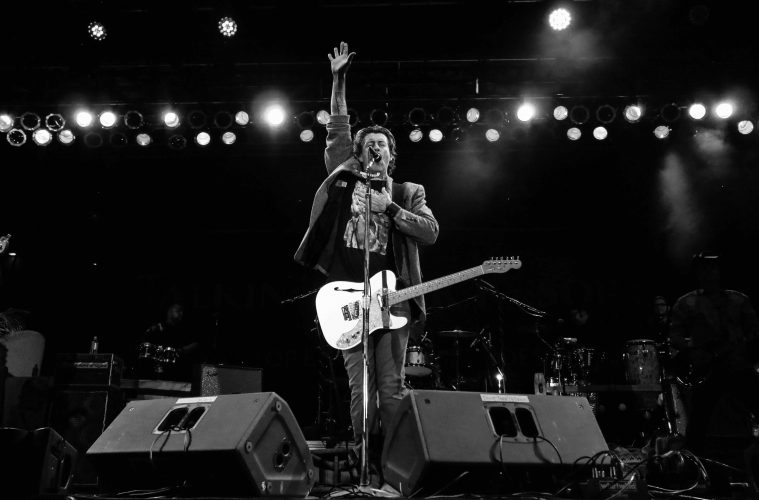 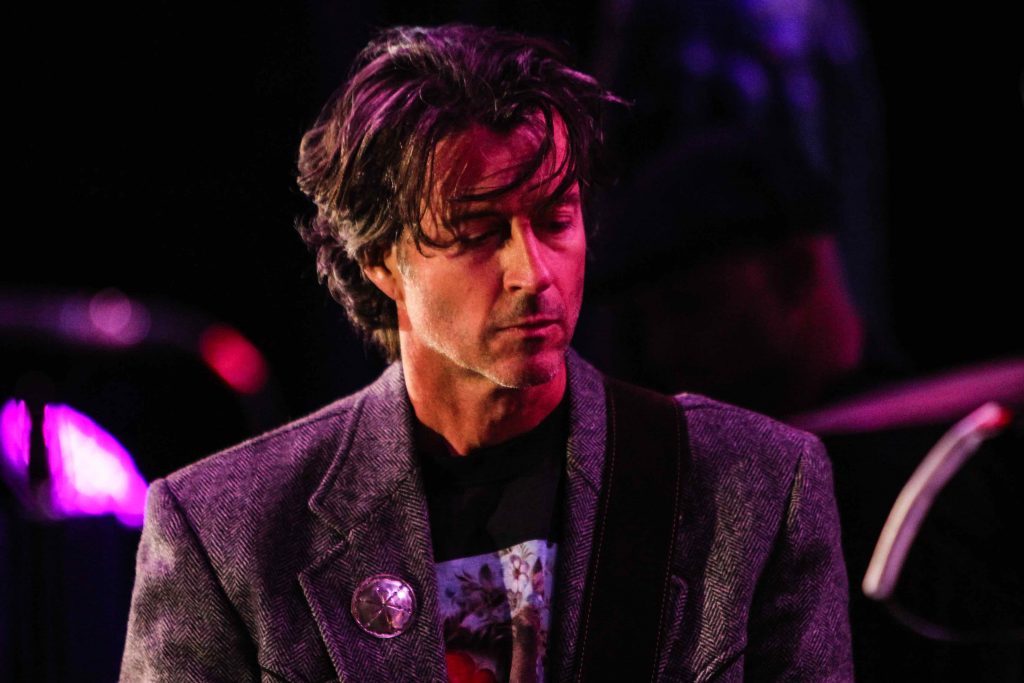 Roger Clyne has truly become an Arizona legend. He’s also a heckuva good interview. We chatted by phone in mid-April while Clyne was waiting to do a sound check for a gig in Eugene, Oregon, and dodging both the late afternoon rain and some early rush-hour traffic.

As a member of the Refreshments, Clyne achieved national notoriety for his song “Banditos” off of the 1996 record Fizzy Fuzzy Big & Buzzy and then for penning the theme song for the animated TV show King of the Hill. While the future looked bright then, it was only a small portion of his career, and the defining moments are still coming for the talented singer/songwriter.

Clyne has fronted Roger Clyne and the Peacemakers since 1999 and will release his eighth record with the Peacemakers—and tenth overall, including two with the Refreshments—on June 16. The native Arizonan and family man is in his late 40s but shows no signs of slowing down. In fact, Clyne and his band spend more than half a year on the road, and there is no end in sight.

In addition to making some excellent music, Clyne also puts out a pretty tasty tequila, Mexican Moonshine, which is the official tequila of the Arizona Diamondbacks. Our conversation ran the gamut, but Clyne was obliging and extremely forthcoming the entire time. 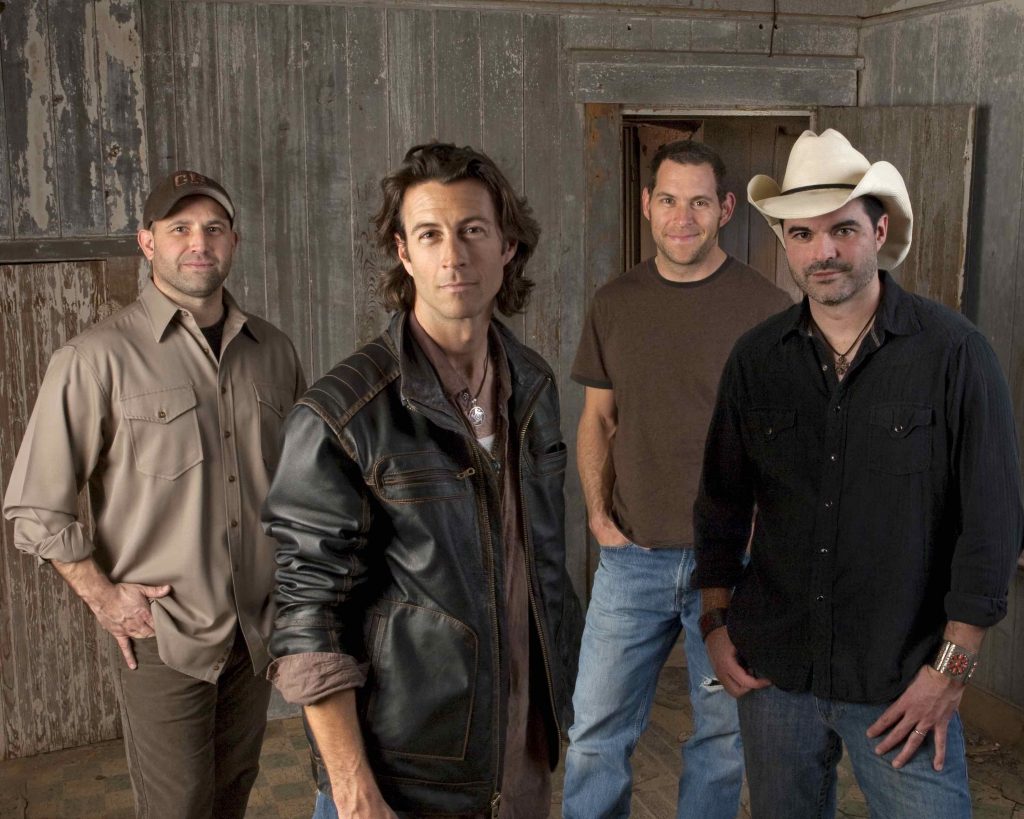 So, what does it feel like to be an Arizona legend?
I don’t know (laughs). I’ve only been given the mantle of that for about 30 seconds. I’ll do my very best to represent our music and our state in the most honorable fashion possible. I think your readers should be a little bit leery of somebody from rock ’n’ roll doing something honorable.

Speaking of the Arizona music scene, who do you think of as legendary?
I begin with Alice Cooper. That’s such a great question. I think the Meat Puppets would be in the same school, as well. “Legend” is such a difficult thing to define, for me. There are so many great musicians and artists that come from Arizona. Francine Reed has great roots, so she would qualify, in my mind and heart.

You are a big fan of Mexico and Mexican culture, so what are your favorite Mexican food restaurants?
In the valley, I have quite a few, but if you want something a little more modern and epicurean, I would go to Taco Guild in Phoenix. If you want something family-owned and essentially unchanged and unchanging, and the menu has been static since the ’70s, it would be Casa Reynoso in Tempe. It’s already hard to get in there. Hopefully this won’t make the line even longer. It’s totally not fancy.

I still love Restaurant Mexico.
I do still love their Clare Burro. There is nothing else like it

No. 6 with soup style beans. That got me through years at ASU.
I used to go there all the time back when it was next to 6 East.

Speaking of those days, what venues do you miss playing?
Oh man, I miss the venues in general. I guess nostalgia brings back all of them. Edsel’s Attic, the Sun Club, Long Wong’s, Boston’s, even Minder Binders. Those were all really fun places to play. All of them in Tempe. If you wanted to go a little further out, it was a big adventure to play the Mason Jar, for sure. That was pretty cool. Everybody that played there should have gotten a shirt that said, “I survived…”

Oh yes, we played there many times.
Franco was always going to help everyone with their career. He was something else. Another one I kind of miss was Electric Ballroom. It had a nice little run for a little while.

It was interesting sonically, with all those angles.
I saw the Violent Femmes just slay there one time. That was pretty awesome.

That leads me to a question: who was it that you heard or saw that made you say, “I want to do that”?
Wow, we’re talking about Arizona roots, the stuff that my grandfather and father, who are ranchers, were listening to, stuff like Sons of the Pioneers, Johnny Cash and Marty Robbins. When I got to high school, I thought, I will never listen to that stuff again.
Punk and new wave was coming out and it was really iconoclastic stuff, and those guys were the icons. I was thrown in with the new fiery blood and loving the Lords of the New Church, the Sex Pistols, and some of the more psychedelic stuff like Camper Van Beethoven, the Violent Femmes and Psychedelic Furs. 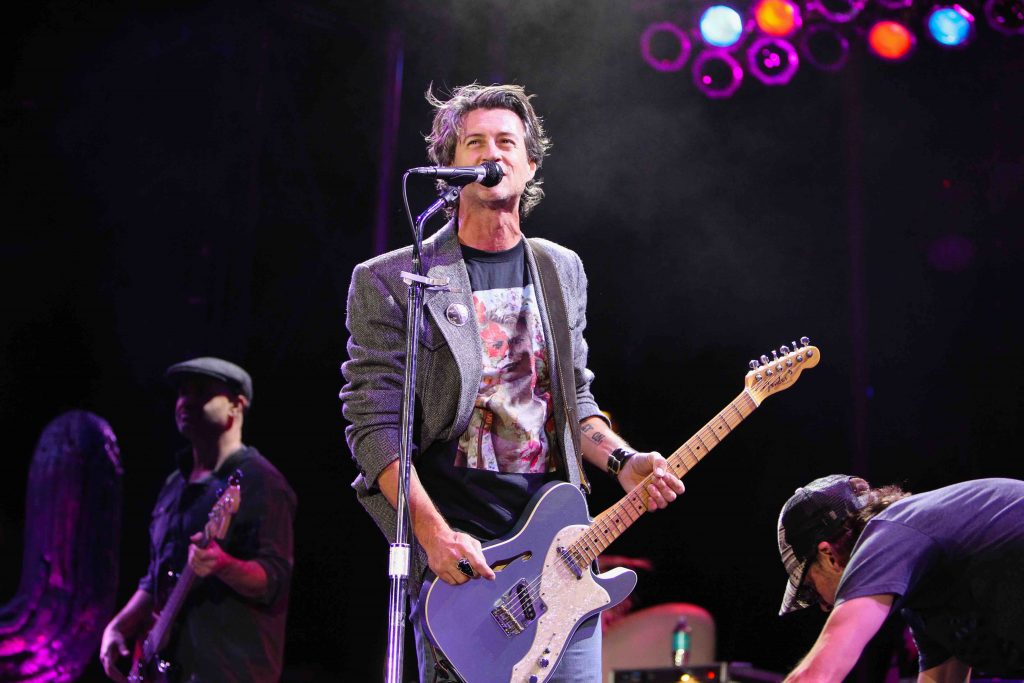 The first concert I went to was the Police and the GoGo’s at the old Compton Terrace. It totally rang my bell. I think I was in eighth grade and I thought, “So this is what that does when it’s played live.” So I went and got my first guitar and started trying to learn it. I was terrible. I’m still not very good, but that’s what got me started.
It wasn’t until my junior year when there was a pretty good band at McClintock High that needed a singer and nobody stepped up to do it. And I don’t know why to this day, but I said I’ll do it, so I stepped up and tried out. I started learning basic guitar chords here and there. I had to learn to play right-handed because there were no left-handed chord charts. They’re all over the place now. Went to Arizona State out of high school and those bands break up like all high school bands.

What was the name of that band?
Oh my God, this one is embarrassing. It was a terrible name: Paris. It was a totally schizophrenic band. I wanted to play stuff like the Lords [of the New Church] and Ramones and the other guys were wanting to play more heavy metal du jour stuff. It was a really awful band.

This is the mid-’80s?
This was ’84 to ’86 that Paris was banging around garages in Tempe. In college, I formed and wrote the music for another band called the Mortals. We got to play with Dead Hot Workshop, Gin Blossoms, Swampcooler, Sticky Thang, Beats the Hell Out of Me, and that was the vehicle in which I started to see music as a career. I just fell in love with it. Though I did get my degree at Arizona State, I just stuck with it.

It was late in my college career when that band broke up and a little bit later when the Refreshments got together. I wasn’t looking for a new band, but it just came together. It’s all the stuff that is a new documentary that Taylor Morden just put out, which was just featured in the Phoenix Film Festival [last month]. It is entertaining for a couple hours.

Where can people see it?
I think we have copies available on our website [rogerclyneandthepeacemakers.com]. It’s a Pop Motion production.

The Refreshments lasted how long?
We got together in the middle of 1993 and had our first gig in January of 1994. We were broken up by May of 1998.

It was Peacemakers from there on out?
Yep. The first Peacemakers gig was October of 1999 and then it has been onward ever since. I guess I’ve been recording now for two decades. We’re about to put out my tenth record in June. Two Refreshments and eight Peacemakers.

That’s a damn good run.
Thank you. I’m really lucky to have had that long of a run in the music biz. Especially with so many changes. From cassette tapes to iTunes and every weird, shifting, nebulous permutation of “business model” that one could think of and yet more to come.

Do you have your own label going?
Yes, we have since 1999. We’ve been indie in the truest sense. Not just in the sound, but in our modus operandi. Our label exists to bring our music to the people, so we don’t have to deal with the vicissitudes of whatever the business is. EmmaJava is the label name, and we’re bringing out our new record on June 16. 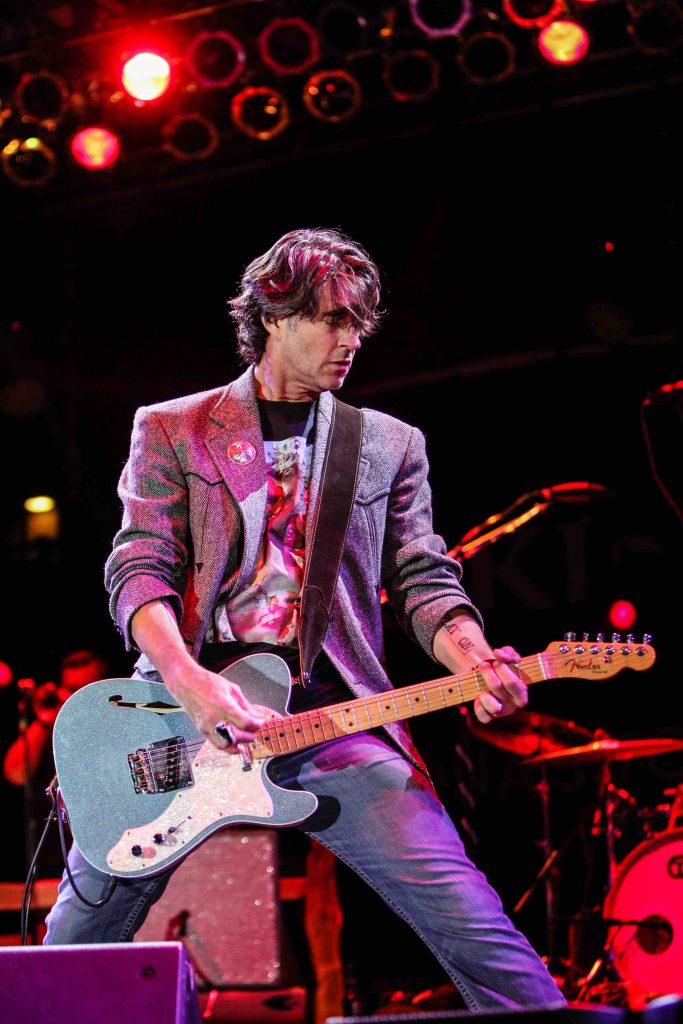 What led you down the path to doing it yourself?
Just the hollowness and lack of real integrity in anything business related in the industry. I got a lot of experience with major labels in just a few years with the Refreshments, but it wasn’t nutritive. The record industry is interested in selling widgets, and I wasn’t. The label should serve the music and not the music serving the label.
There are a lot of ways to do it differently, and plenty of ways to do it differently and not survive. You have to find a way to make it sustainable.

How many shows do you play out a year, typically?
160 to 180. We’re typically out about eight months touring, but that includes travel days. This year, about 210 traveling days.

You have a family, correct?
I do. I have a family of five. I am now the parent of… well, all my children are legal adults. They all made it to 18, and they are happy and hopefully well adjusted in this weird, wild world. They’ve all done really well.

Congratulations, that’s definitely something to be proud of.
It’s a point of pride for my wife and I. We raised our children in a solid marriage and a good home despite the fact that we are sort of— itinerant gypsy nature of our industry. We raised kids with solid roots.

What do you think of the current state of Phoenix music right now?
I think we could use more stages, so we could have more live bands and more people coming together to celebrate their unity, community and diversity through local music and art. I think we need less DJs, but I’m an old guy. I’m not a big fan of taking someone else’s music and mashing it up and calling it your own. I gravitate towards art that is made from the heart and by the hand.

I was lucky to come up in the ’90s when there were all those stages around Tempe, Phoenix and Tucson. There were so many bands and not enough time to see them all. It was awesome. No cover at Long Wong’s, and Sun Club was begging you to come in and get a pitcher of beer, and you’d wade through the slosh to get into the bathroom. It was dirty but it was luminous. I hope we can get back to that dirty renaissance.

It seems to be cycling around again.
Last Exit, the Crescent and [Valley Bar]. I’ve watched Charlie [Levy] for so long. He’s great at attracting the talent, and he treats them well and they come back. He and Danny Zelisko are both bringing great music to the Valley. All the promoters do a great service to our community.

There are definitely some unsung heroes. What else is coming up?
We have a festival in Rocky Point called Circus Mexicus. We started it in 1999. We played to 200 people the first time. When the economy isn’t too bad and people aren’t telling lies about violence on the border, we go about 4,000 or 5,000 people strong in that little community. The next one is June 8 to 11. The Peacemakers will share the stage with the Samples and there will be tons of Arizona bands. There is a bunch of good music happening on at least a half a dozen stages that weekend. We’ll also be doing charity events that benefit the community, and it is always nice to do that. 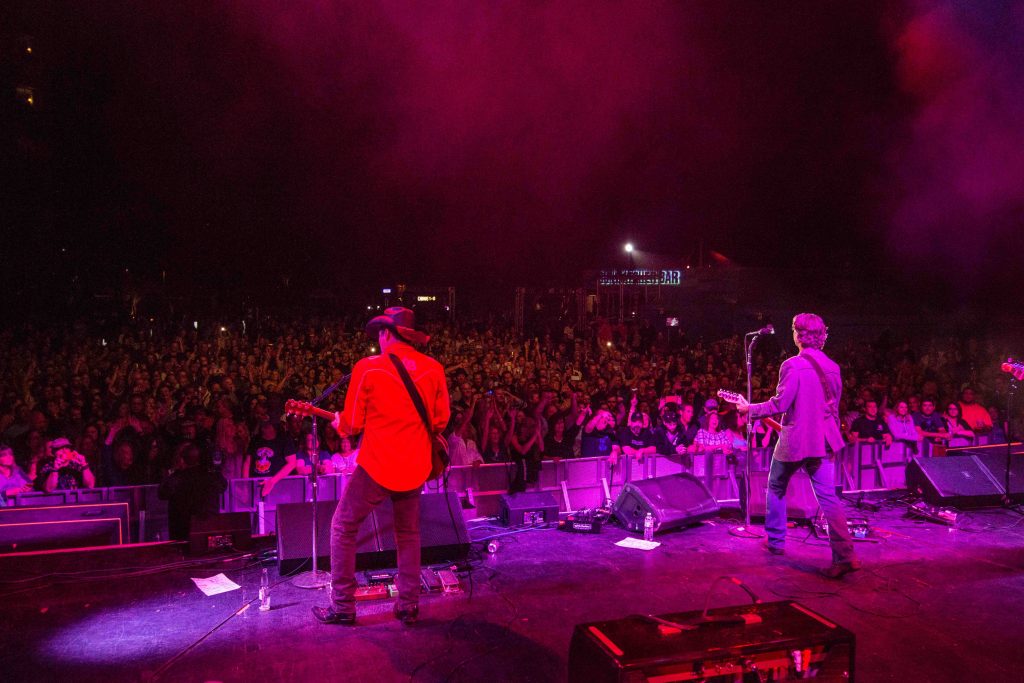